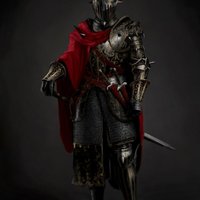 While this patch has done some pretty good improvements and made some good changes, there's still 1 problem that remains: The Red Commander in the Grad Invasion is still too vulnerable. Adding Fortifications was a nice touch, but still after playing 3 rounds today and losing every time like before (just a bit slower), I must say that we still need more changes made to Grad.

The Commander is just too much out in the open. The melee players who get to him are no problem and just part of the game. But the number of ranged people that hit him always goes up because everyone knows he has no cover. Enemy players climb the Red tower, climb over tall rocks and even on the Wood Logs infront of the Commander area and hit him repetitively. And it's just so hard to counter them when trying to protect the Commander. For the tower, there's usually more than 1 guy up there so you'll get beaten from when you are on the ladder to when you get kicked off the tower.
For the guys on the rocks its the same. And for the guys on the wood logs, everytime you try to go after them they just jump down from back. Then 5 seconds later they are back up. And it doesn't help that you can't climb the logs from the Red Team's side. You just keep sliding off.

Basically we need a wall, structure or giant rock or anything that could protect the Commander from ranged weapons, from AT LEAST 1 side. He's got such a small space that he can't take cover behind trees and he's constantly walking in the fire the enemy has thrown. The space he's allowed to walk in is so small and he gets bombarded from every direction but behind (since that is the Red spawn) and there's just no way to counter this. Even when we Engineers place walls for him to take cover behind, they always end up being burned down in seconds because of the enemy's fire bombs.

Please consider tweaking and balancing this map for the Red team. The only part that we can ever stop the blue team is the part where they have to get the cart through the middle gates and only because it's a choke point. Any point before or after that is either too easy for the blue team or they have too much time to get it done. 8 times out of 10 the blue teams wins. It NEEDS to be balanced.