Are they suppsoed to be a temporary prank or…? No seriously who came with the idea of introducing a semi auto ballista in a medieval game? XD If you wanted to give your game an Omaha beach vibes, yes you did it m8s.
Please delete. I'm trying to play warfront and the entire ground is on fire because you get 6 firebombs PER life, not counting post resupply cooldown. It's extremely obnoxious to the point of me not wanting to see another firebomb in the game for the rest of its existence. Next up, fix horses, they're currently too fast compared to the projectile speed of throwing spears and arrows that they can damn near beat them in a head to head race.

The mounted crossbow would be a good counter if it didn't have the turn radius of a guy parallel parked on a packed street. Don't buff the crossbow though it's designed well and does its job, instead nerf the god damn impossible to kill horses going on 40 kill streaks with spears. I don't want to play warfront until both of these issues are fixed, it's just so fucking annoying and boring to be killed by a firepot or being run over by a horse in the middle of a teamfight several times in a match.

peacerer you are a blessing to this community, please never change. dont let the 2h elitists or bad designed archery and shield drive you away!

Yes, i know you love me guys, i love you to. 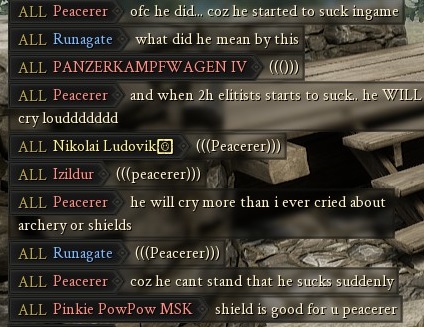 I see you never let our expectations down

@crushed said:
We have no plans to ban third person in ranked mode.

Are you raising the first person fov limit to make accels as consequence free for 1st as it is for 3rd? Some weapons riposte->stab really just looks like the weapon stays in the parry animation until you suddenly get hit.

There's also a really annoying problem with people feinting stabs with long weapons that just looks like they're stuck in windup until you suddenly get hit from a weapon whose model has already been clipping through your body for 2 seconds.

...this is usual response you can receive here from 16 year old 2h elitist die hard self proclaimed PGs who mostly don't even bother to read.

This is a post regarding the game modes in the works. The first new mode in the work is King of the hill. Currently, the only map you can play this on is on fl_crossroads [this should be the expected name for the new map for the KOTH]. The map utilizes the currently hidden map horsefield.umap and built upon it a small ruined castle with a tree fort. 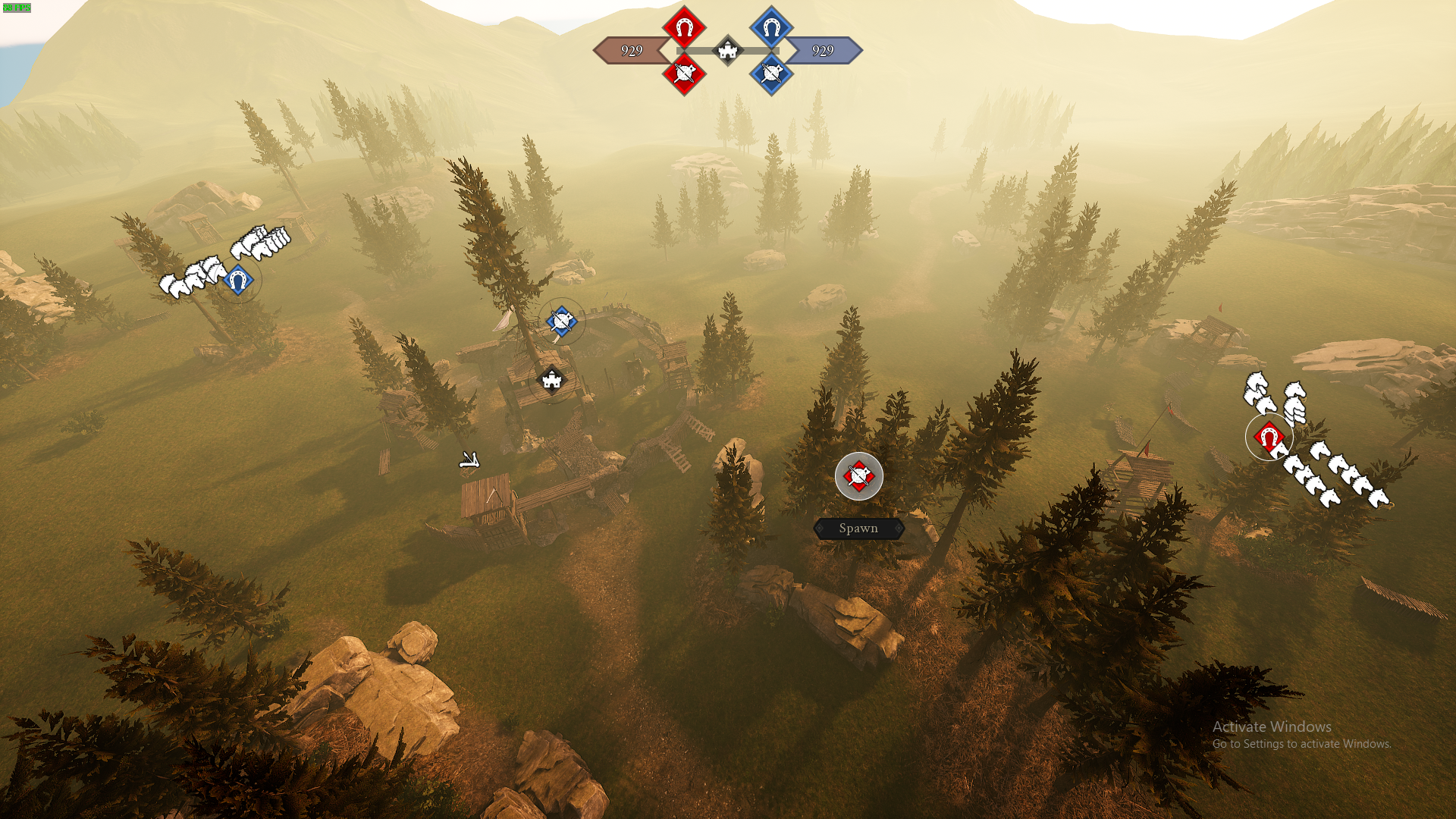 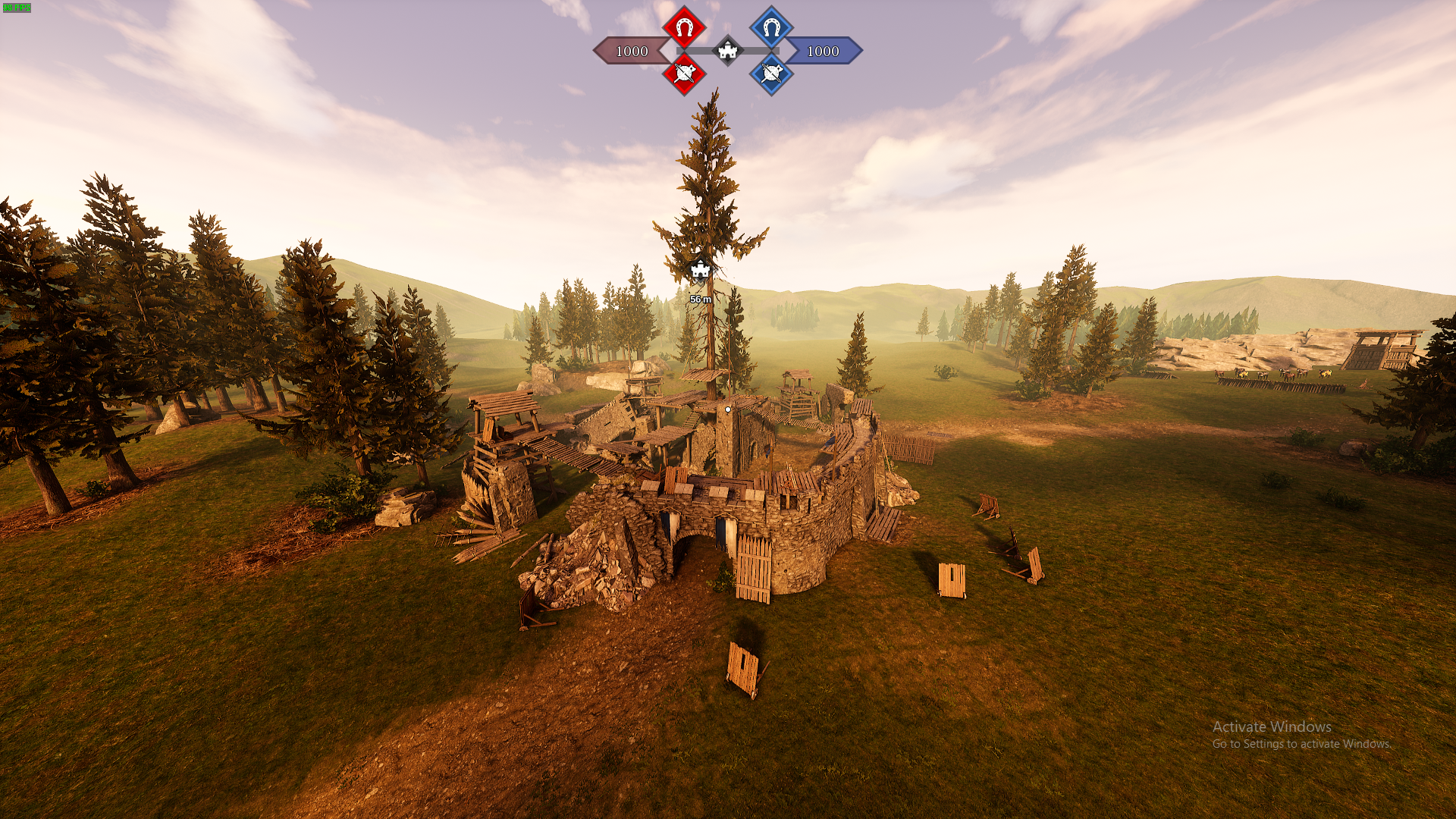 Note that there are two spawns. One spawn is for the Infantry that spawns relatively close to the ruins. The second spawn is located away from the castle and it provides horses for players to use. It seems like an oversight because horses can't navigate relatively well within the ruins. 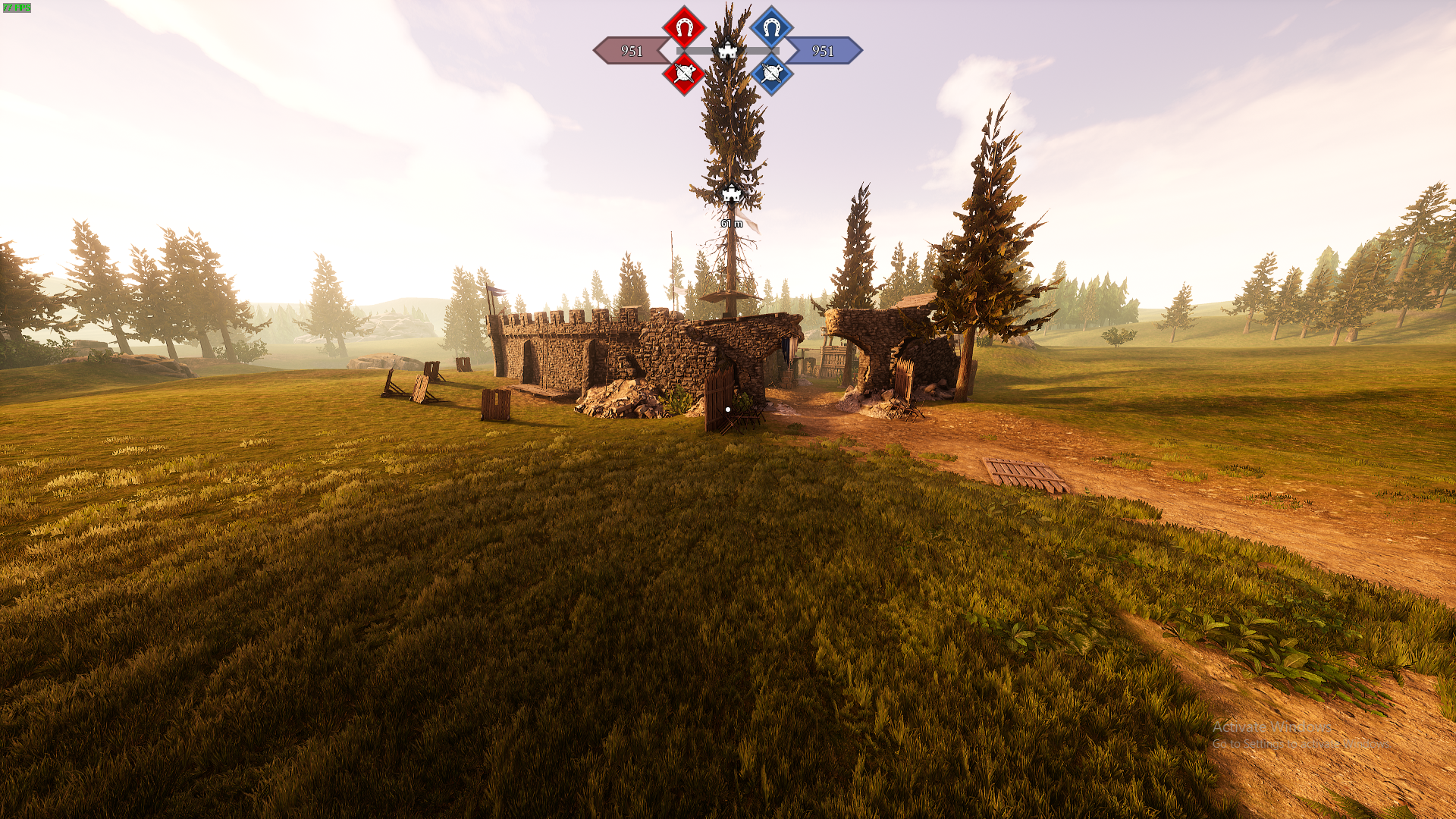 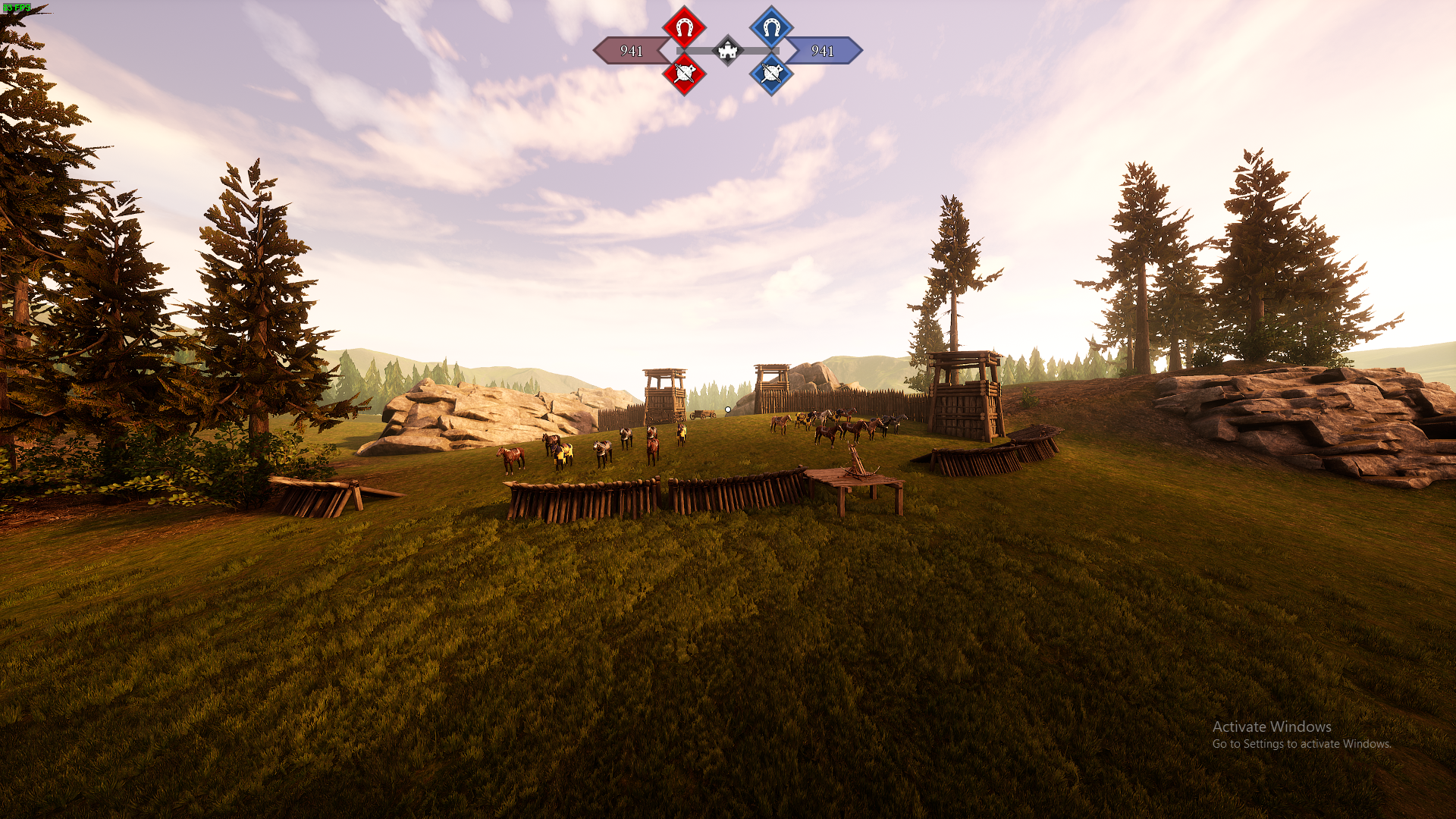 This picture shows the new HUD element for the mode. How it functions is relatively simple, in the pictures current state it is shown as neutral. If a team captures the point, the bar pointed towards either red or blue will fill the whole. The bar also reflects what percent the capture state is.

The second new gamemode in the works is called "Push". In its current state, it functions as a rudimentary siege gamemode consisting of a team pushing (in its current state being that only one map is provided with the current build) a ram from blue spawn in mountain peak all the way to the red castle. Along the path are objectives blue can capture which prevents red from spawning in the immediate location and should reflect the pace at which the game is moving. The cart has its on HUD the "castle" HUD used for the Blue final objective that reflects the progress of the cart overall. If blue captures the objectives, red shall slowly bleed tickets. Being that the mode is in such an early stage, it is possible for red too destroy the red final objective and win the mode however this is likly to be removed once the mode is further developed. Red, however, cannot recapture objectives once they are captured by the blue as it will remain locked for the duration of the game. It's important to note, found within the game files is a file referencing moving a siege tower and moveable ladders.

This image demonstrates the path in which the blue ram takes for the current map. 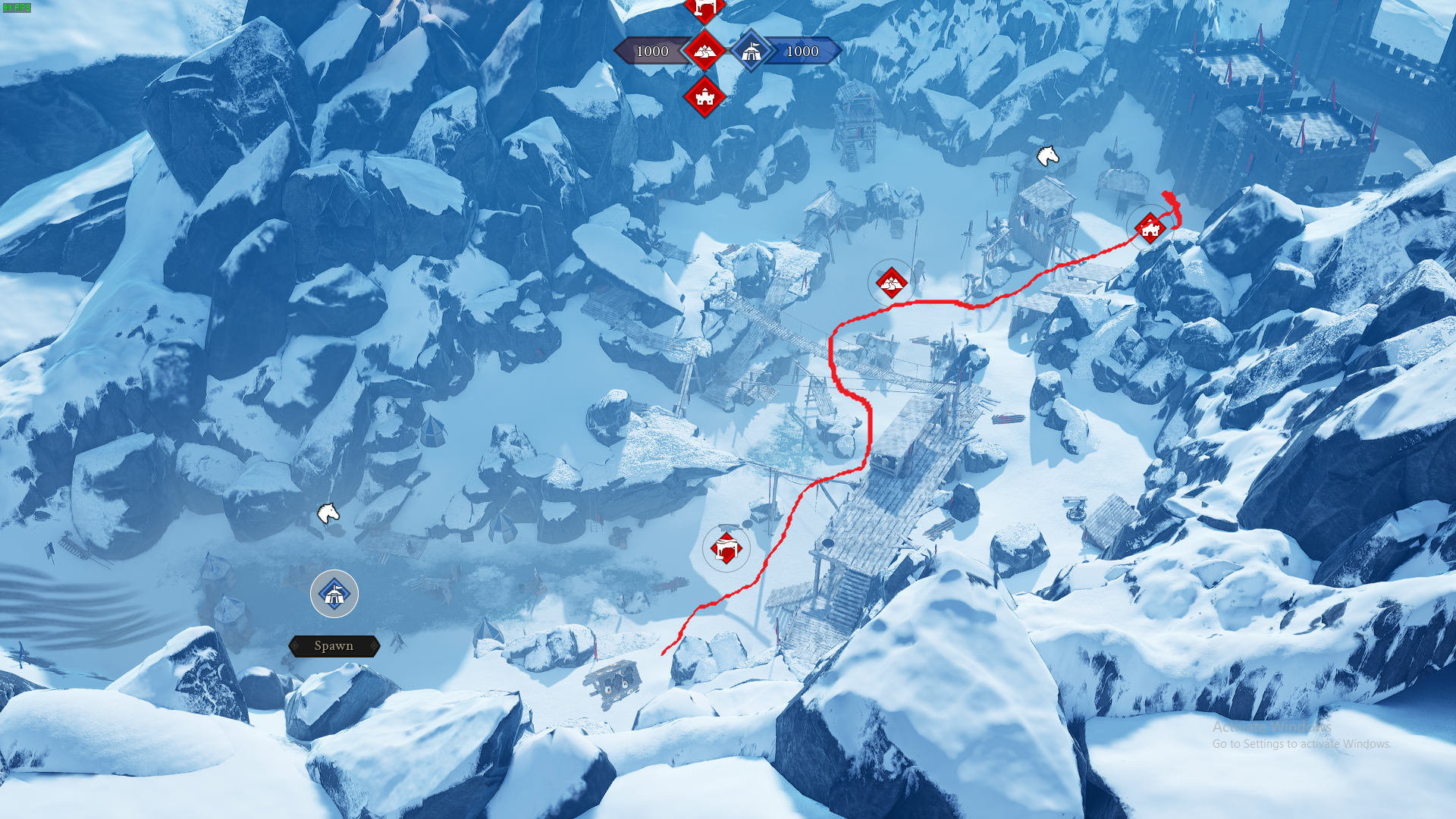 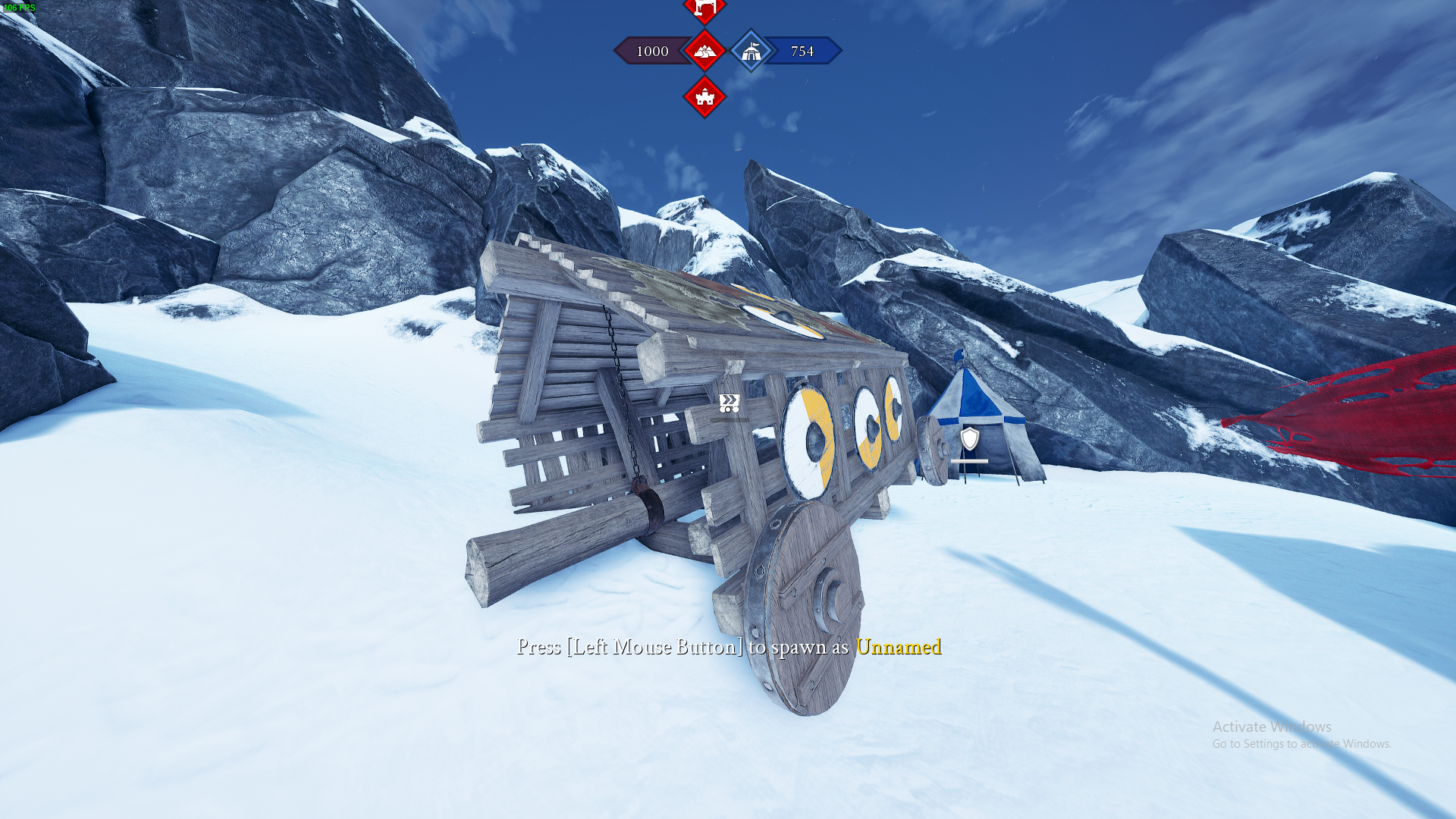 Picture of the HUD elements in the Push gamemode 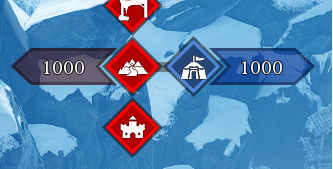 That's all the pictures I have. Later I'll be making a post regarding a lot of the hidden content found within the current build of the game and previous version.

You can play these modes on servers assuming its been updated to the latest version of the game build being that the files are included.

Before anyone asks, I WON'T ACTIVATE WINDOWS UNLESS YOU BUY ME A COPY.

Completely agree with the critique being put forward here. I really like this game. It's good looking, it has fairly good combat (better than that of most melee combat games that got released in the past 5 years or so), it has great customization, but while those things were done well, the maps and gamemodes really fell behind.

The lack of a proper objective based gamemode, or just siege, really makes all other gamemodes feel like the same shit in a different toilet.

Hopefully the devs recognise this, because I would really hate to see people quit fairly quickly because the maps and gamemodes aren't able to support what is otherwise a great game.

Yeah the maps are mostly meh with serious issues that I'm not sure how were overlooked. The mode needs more work. Right now it just makes me angry because the potential is there for it to be a great mode but it misses the mark in multiple places. Better map design that accounts for all these crazy features like horses, firepots, and movable catapults would do wonders to make it flow better.

Getting killed by catapults was lame in Chivalry and it's even more lame in Mordhau, since the catapults can move and are more powerful. A lot of the time there's just no way to avoid death by catapult; how is insta-death from afar the least bit fun, especially when so little skill was required to do it? At least you can avoid horses and take cover from ballista, there is no hiding from the rock-lobbing death machine though, since it can do damage through ceilings and has a huge AoE. Frontline would be more fun with the catapult removed; just because Chivaly had it doesn't mean it needs to be in this game.

It's way too powerful; how can a single head sized rock launched at catapult speed kill 5-6, or even 3 people at once? Even a cannonball wouldn't do that unless they were in a line, an artillery shell maybe.

Killing people with cleaver is like killing people with a pocket bardiche. Sharp edge or not it should be useless against T1+ and should have the worst stam negation on account of its size and lack of handle guard/leverage. And why such a small weapon gets the same parry size as a zwei hander is... well I'm gonna stop ranting now

Take everything annoying from chiv messer and import The only way I've ever seen it won is by sitting in a tower for an hour and cheesing. Its BORING, there's no FUN to be had. Almost everything that makes the game mode hard discourages you from fighting in melee and doesn't even affect people who cheese, with the few exceptions affecting both. I was so excited for the horde mode before release but now i see its worse than it was in Chivalry. Who thought putting full damage ranged enemies with crazy aim was going to create a good experience? So far have seen countless topics calling for changes but next to zero actual changes. As it stands the game mode is anti-fun and pro-farming. Can we at least get a sitrep on it?

Agatha. We don’t go there anymore.

FIX THIS! Make the horses stagger if they run into too many people, make it so that riders fall off if they get hit by a spear! Why is the exact real life counter to cavalry not able to counter horse riders in this game? Almost every game is ruined by a good cavalry person. Once this is balanced out, I will be so happy.

I was enjoying frontline with 48p servers, had some fps issues but overall it was playable.
Now frontline on the official servers is just totally unplayable and not fun at all, here is why:

It is very hard to actually enjoy the awesome mechanics of Mordhau in this setting, the fps drops make is hard to parry, the crammed maps make it hard to actually move around, Fire everywhere is just anti-fun, Unbalanced maps remove the sense of urgency.

Now I feel like I can only play on Skirmish and Duel servers, to truly enjoy the game. I think if the FPS issues are fixed and official servers roll back to 48p frontline will be massively enjoyable; but as of now in its current state its just a chaotic laggy mess.