You can see a miss coming during its windup, react to it that soon by throwing an attack and footworking to force the miss, and the opponent will still have enough time to CFTP. If your opponent whiffed so bad that you could see it during their windup, you managed to react to it appropiately, and they failed to correct or counter-punish by further distancing themselves to force a miss on you, and they will still have enough time to CFTP.

It's fine to reward easy to do accel/delay waraxe mixups with unreadable 2 shots, but punishing blatant whiffs like in any self-respected fighting game is somehow inconceivable.

Look at the plays the opponents did in that video. Why shouldn't those be free hits, considering they failed to react to the punish (or moreso didn't need to because of how forgiving whiffs are). In a high skill game we're debating whether or not whiffs should be punished with a hit? adding a 50 - 100 ms no-feint window to combo windups wouldn't mean FREE HITS WHEN ANYBODY BARELY MISSES, it would mean that if you miss that fucking blatantly you'd need to back off and footwork out of the punish or fucking not miss in the first place, or eat the free hit. Yes, a free hit after missing that bad and failing to counter the punish is fine for a competitive game.

I don't get why Crush constantly moves the balance away from the more interesting and unique parts of the game.

inb4 'but then people would run around trying to bait misses all the time!! i can not comprehend the idea of subtle changes or try to imagine how they would actually affect the game!'

Happiness is an internal process. A decision each soul must make for itself. BLOODLUST

With the help of crystals I feel more in tuned to the vibrations RED PARRIES of the universe and I feel the love emanating from everything... FEMALE CHARACTERS

I've also started microdosing LSD and magic mushrooms to over come RAPIER the trauma from previous negative outlooks. NO BLACK PEOPLE IN MORDHAU Only good vibes FIREBOMBS from here on out :)

Review rating on Steam is slipping down to a mixed rating. Player base has dropped off more than 90% since launch. No patch or hotfix in over a month.

This next update better be a goddamn home run.

Thanks to progress made by the community, this includes TDM maps for the first time

Check out these awesome new maps :

Adamant is also being updated to version 1.2, including a new haunted underground room.
DungeonEscape is updated to version 0.48, i recommend you to check this one if you haven't yet, for the moment it's a scenic tour of the map, but it will be a modified horde mode in the future.

Congrats to the map makers for their awesome work !

A new version of the Community Map Installer is available, you will be notified on launch.

Join us on discord to chat with the map creators, get help or test and vote for new maps before their release : https://discord.gg/x42Zp7q

you know what really triggers me

when youre playing blu on camp, you're walking towards the river and the environmental hazard trebuchets that go when you cap a point fly and kill you when you take 2 steps out of spawn With the recent buffs to dagger and cleaver, it is safe to say that Qstaff is even more lackluster than it once was.

Basically I think it should be reworked as a longer, heftier, but more costly respectable weapon with viable dmg and mixups for its reach at the price of 3pts (still keeping it as the cheapest polearm).

Why is this needed? Simply put the damn thing feels weak not only in dmg but also in use, being solely effective at beating up newbs. This is due to a combination of its crap stamina, crap dmg, and mostly its crap release time (active frame drag window). Buffing all of these whilst making it longer helps fill the empty niche of the long blunt polearm while still keeping it relatively quick and snappy so it is unique. In this suggestion, it was slowed slightly to keep it from becoming abusive (for reference, longsword windup is 550ms) 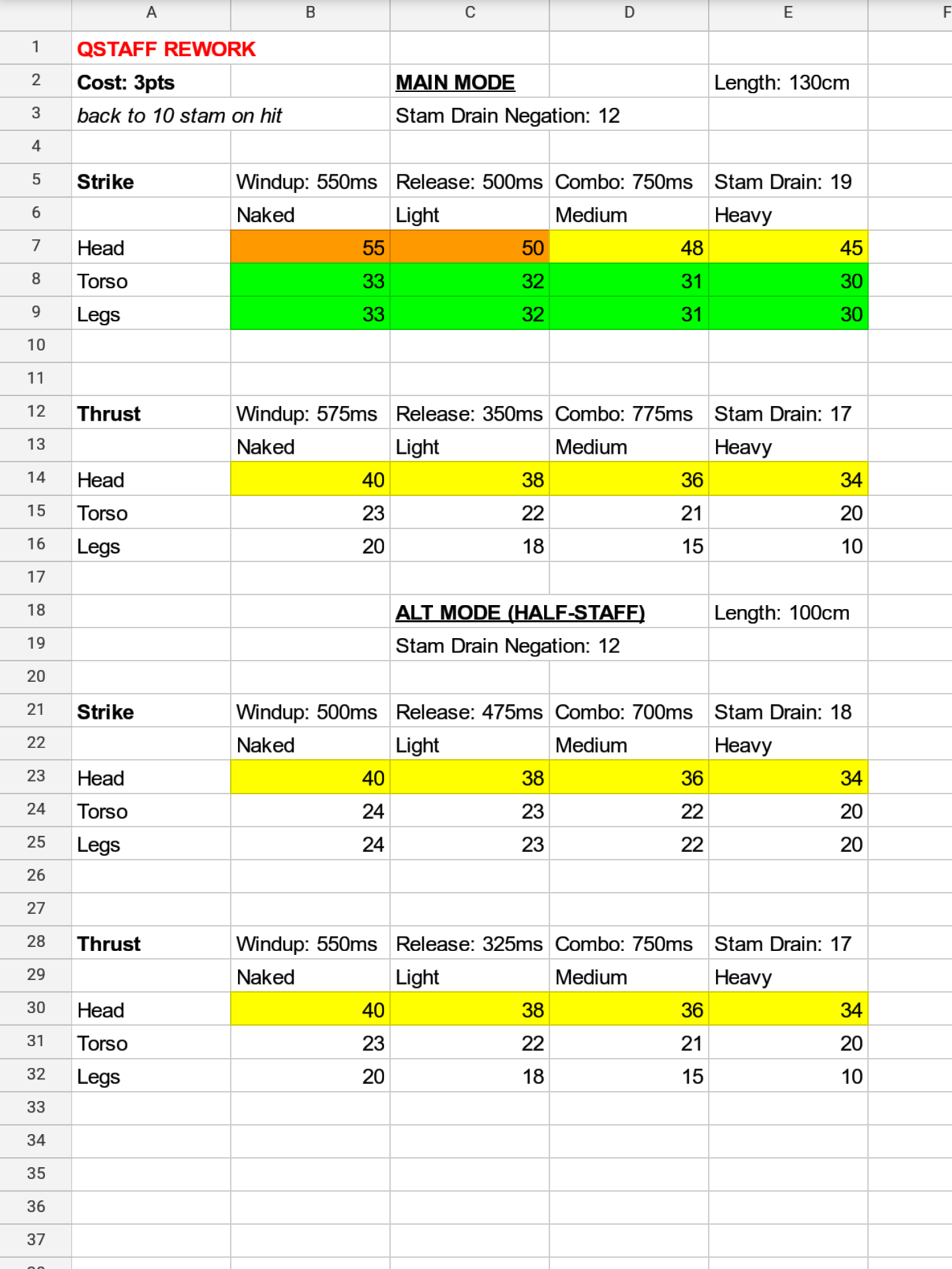 EDIT: Here are the current stats for comparison (open image in new tab to see clearly) 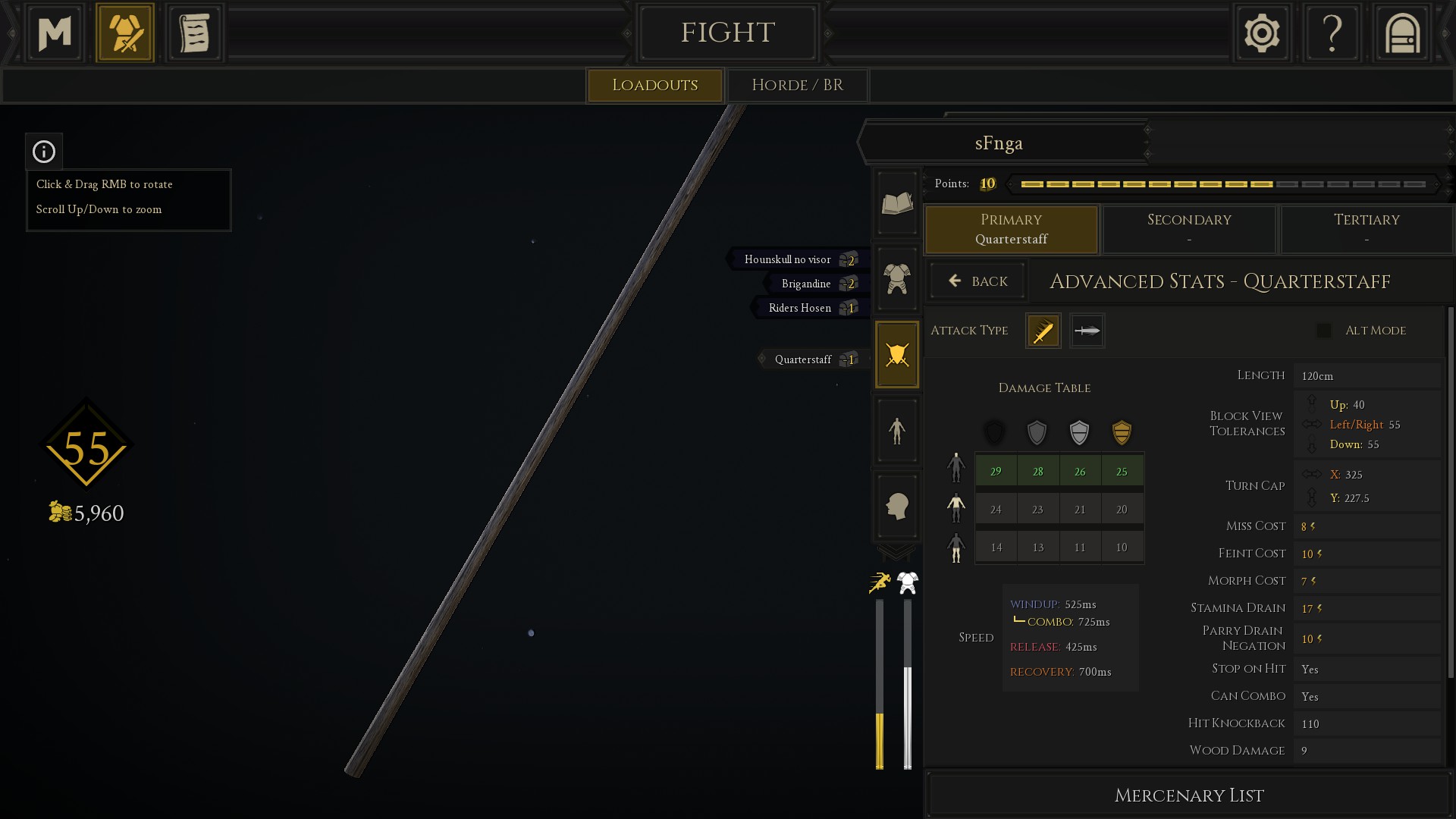 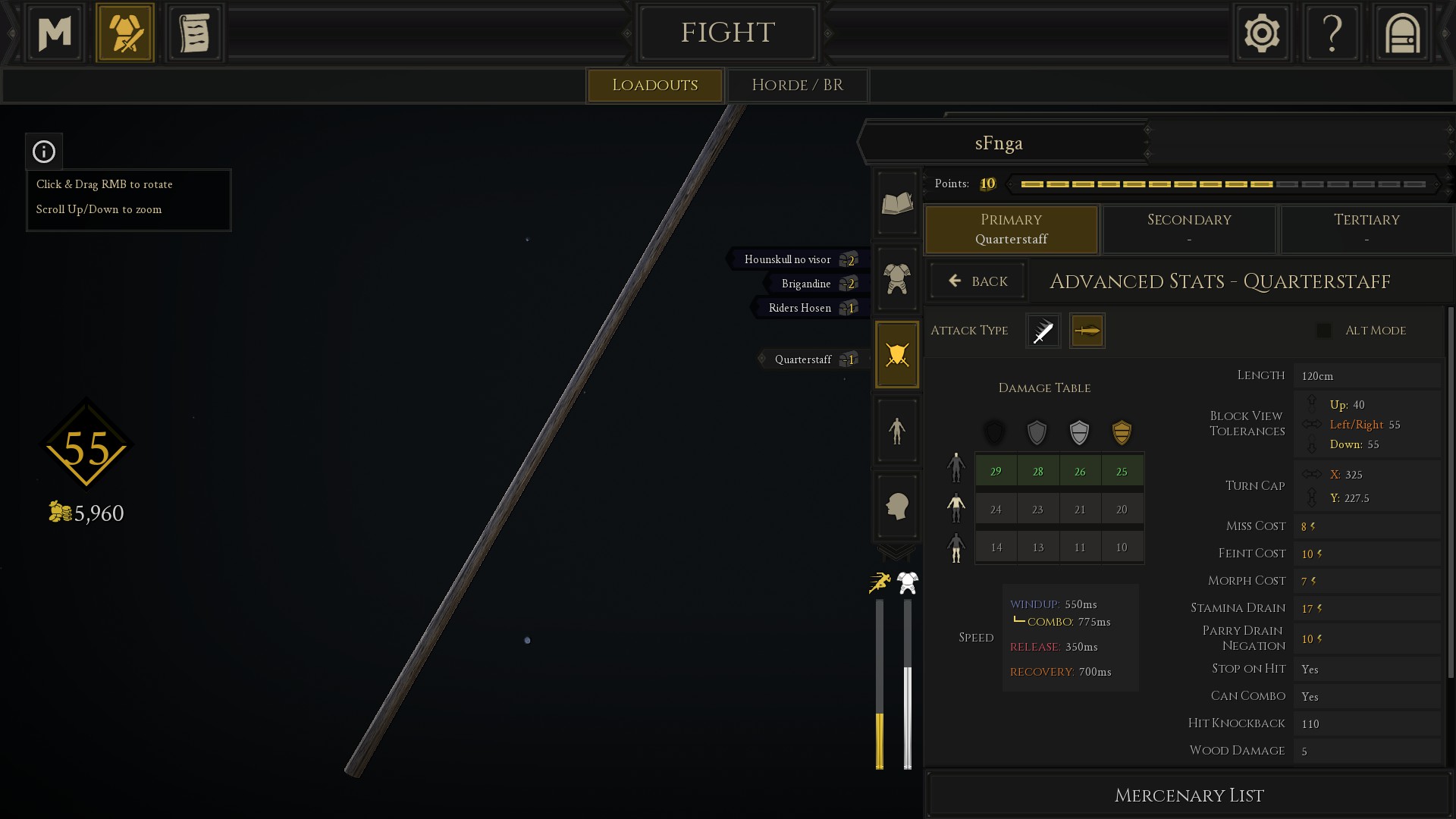 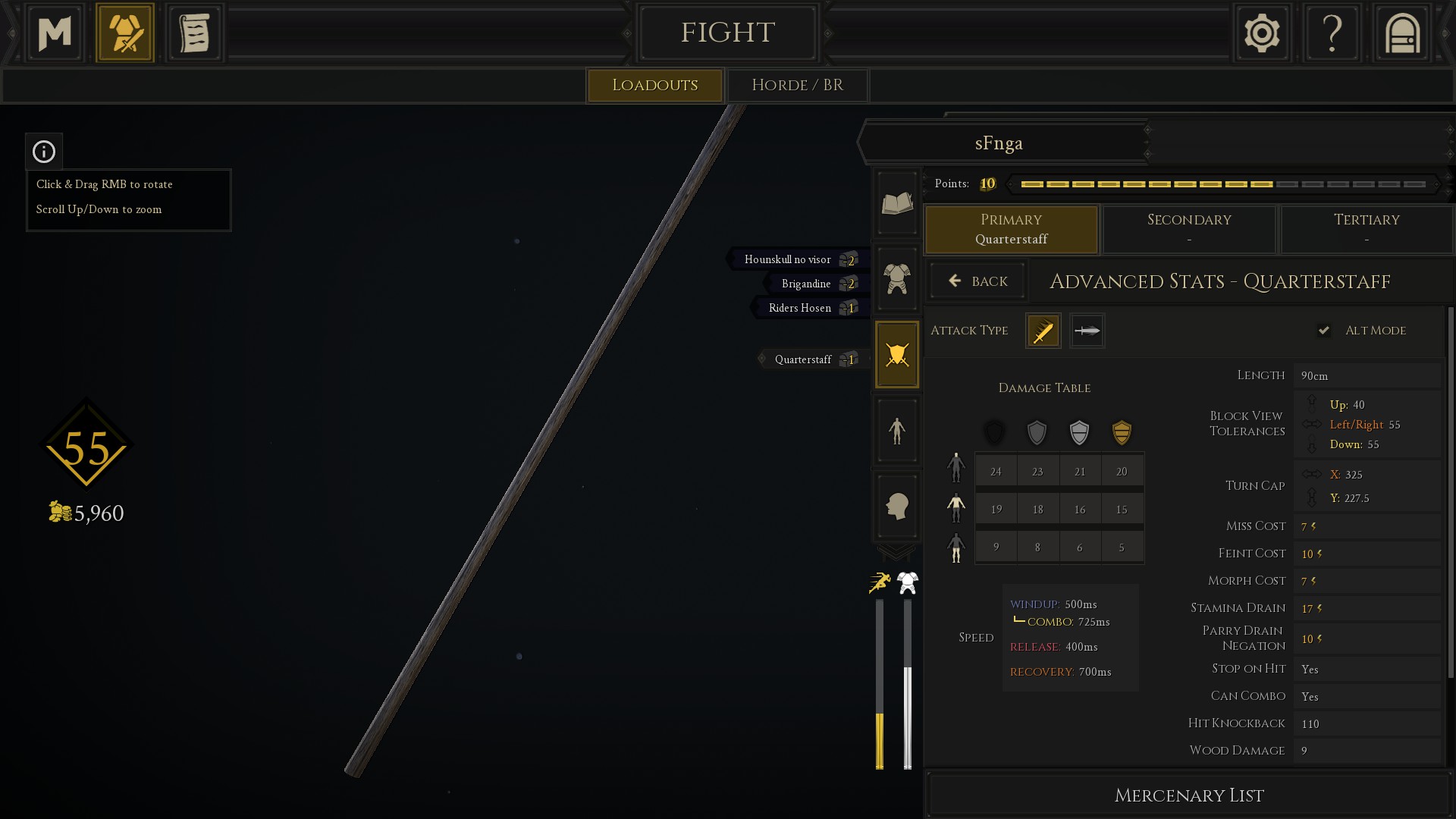 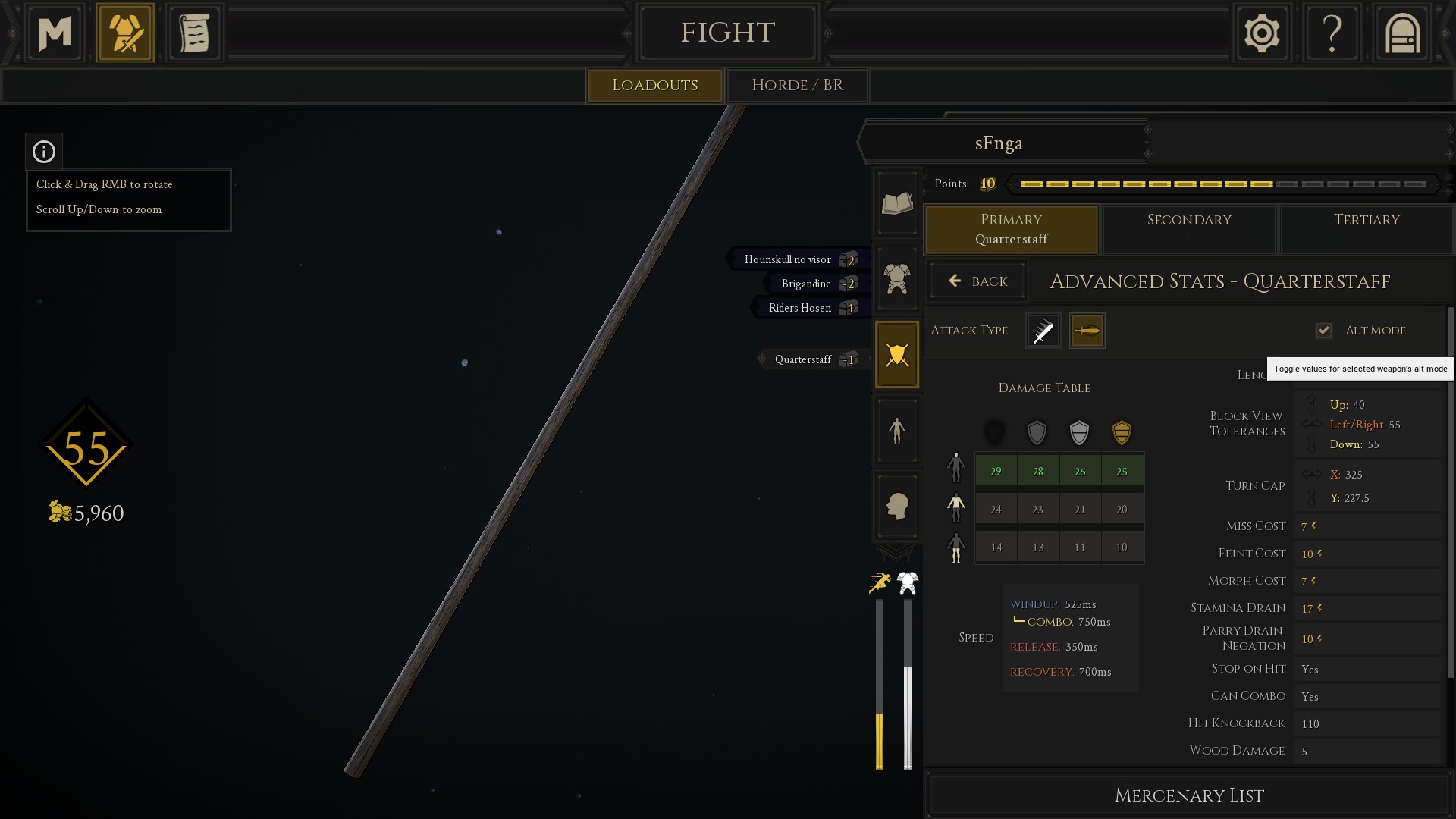 A baseball bat is a stick. Do you really think it would do less to armor than a sword would?

A staff is that baseball bat but stretched out. There is nothing silly about it. One of the quintessential weapons during this time period.

Regardless of what you think, cleaver is basically a hunting knife but can 3htk full plate on swings. So honestly dude not only is what you are saying wrong, it is irrelevant for game balance alone.

A suggestion for a potentially fun game mode down the road:

Similar to Horde mode, but allow players to play as the band of rabble. Triternion has even mentioned a close quarters town/city map in the mix with a small village.

Nobles must win by “quelling” the peasant uprising by holding out long enough to outlast the timer (or a certain amount of rounds/waves) and by holding certain objectives. If killed, they do not get to respawn. Their numbers are fewer, but they are much better armed and equipped.

Peasants must win by “overthrowing” the nobles by capturing the objectives, or killing all of the nobles. Peasants respawn regularly (or with each round/wave). What they lack in weapons and armor, they make up in numbers.

This is just an unfinished idea however, but I thought the basic premise had a lot of potential. Feel free to post your own thoughts or suggestions.

You're not free to complain about things being hard when you play Spear.

I won't bash it too much, but I just hate dieing to RNG and meme crap.

Random archers potshot gets me

Horses from behind 1 shotting me

Flinched from horse then scrollwheel'd by shield rapier turtle boi

gambled because everyones a noob and just keeps swinging

nobody really plays the objective

nobody defends a captured point ( literally no incentive to stay there, so once everyone waddles off to the next one naked
lute guy whips out from behind a house and caps it again, enemy team spawns there again zzzzzzzz)

maps too open, too much space for massive clusterfucks of LMB and horses and firepots and garbage, need some tigher areas to fight in

literally was with 9 team members fighting off like 7 enemies, and enemy horse comes flying through us and smashes his face into a wall. ENTIRE TEAM turns around and lmbs the horse, 2 blokes got teamkilled. The 7 enemies just stomped us, i just couldnt even turn my camera away from the absolute retardation lol and pressed end key and ragequit back to duels

nobody has any real reason to try work as a team (or incentive, cause you need rewards now to play as a fucking team )

half team is playing as naked rodents

would win more games if everyone was 3/3/3 greatsword

1.4k hours spent like 40 out of those on FL rest on duels

@Guard12082c34e08e494c said:
The game isn't dying. Its the fact that people that buy the game get turned off quickly because of its difficulty and high skillcap. People nowadays want instant gratification.

Its a bug that is fixed next patch.

SDK (mod tools) for Mordhau isn't out yet, but one of my teamates managed to create a playable map already !

Plouplou did a sick job to achieve this and bypass the lack of SDK.

He contacted the devs to make sure this would not lead us to a ban or something, they actually enjoyed his work and allowed us to use & share the map, and even more, the knowledge about creating maps without modding tools.

This means that everyone is now virtually able to create playable maps !

Here is a video to showcase the first community map, the Berzerker Arena (a duelyard, WIP) :

A discord has been created (Mordhau Community Content), in which you will find : @Luward said:
"God, I can't kill a tank with an AK-47. this is unbearably broken and cheap. Tanks are OP. Plz nerf" If you have a problem with cavalry, use the tools at your disposal and use better tactics. Cavalry is where it should be: OP against infantry.

You are correct horses in mordhau are like tanks, in crossroads where every horseman is spawn camping and making the game miserable for blue time and using spear there isn’t a single weapon capable of stopping them. Billhook, the best weapon against cav by far, gets destroyed by spear everytime range wise unless the rider has autism the billhook man is fucked.

Horses should have to fear polearms in a medieval game, a bear trap doesn’t even kill a fucking horse for gods sake. I see level 60 players riding around spawn camping noobs who have no possible way to reasonably defend themselves right out of spawn and personally I believe said level 60s deserve to be lined up in front of a firing squad.

@DonPelayo said:
Alright guys. I'm here to play the cavalry devil's advocate: Cavalry is NOT op.
First off, horse archers (archery is hard enough to pin down since it seems like none of my shots actually hit where i'm aiming lol) is not all that viable. If people are aware of your presence then they can just billhook you, or worse they can get one of their own cavalry guys after you. It's just not a solid choice.

Cavalry Archer roleplay is ineed underwhelming because its A: way harder to hit something from horseback and B: not actually more effective compared to melee Cavalry.

But Cavalry Archers have to be weaker since the only way to touch one is to use your own ranged weapons or another rider.
Recurve Bow should profit from a damage Bonus like Meleee weapons, just weaker. Would make it more interesting compared to the other Ranged weapons.

Knights on horses (with swords, mauls, etc) are absolute trash. I say that because (and i haven't done any research to verify this) but the hitboxes on swords, various 2 handers, do not work very well. I've seen hits go straight through the enemy as I'm passing by them without any damage.

This is straigh up wrong, you can have amazing results with almost any weapon on a horse.

Spears are the only issue I can see, and afaik they're working as intended. They piss me off for sure, but that's to be expected. Everything angers me. I'm an angry person.

Good you aknowledge that because 95% of horse riders will use the spear and just go on couch cruise control, brainlessly oneshotting everyone who still has not a PTSD.

How to fix Horse:

Reduce Collision Hitbox for Flinch.
Increase turning radius for couched horses by a good margin .
Incerase minimum speed requirement for couching.
Decrease acceleration for all Horses.
Reduce Attack Range for Halberd and Spear Stabs.
Optimal: Melee and Throwing Weapons deal more damage to horses and riders depending on the current speed of the rider/angle of the attack.

Genoese Crossbows sound interesting since they are historically relevant and a nice reference to Age of Empires II.
On the other hand probaly 90+% of melee players are against a equivalent to a Medival AWP (AKA Chivalrys Heavy Crossbow) in this game. 13) RNG Trebs on Camp. Why? They shoot at their own teammates. How stupid is this shit? Damn... Its depressing how better the map design looks then what we have in Mordhau... @Iodine said:
How are you people real?