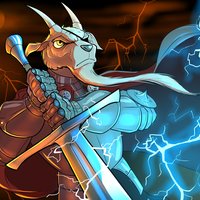 How is Feitoria not done yet jesus christ. It feels like i stopped playing this game months ago and it's exactly the same.

Yeah some of us paid hundreds because we liked the developers vision after coming from chivalry. To see it in its current state is disappointing.

You're just a dick dude

I don't worship em, I just know they do literally everything except combat better than Mordhau. Even then, a few things were better and more consistent.

Is this whole calling everyone who disagrees with you a Nazi a European thing or an American thing? Jesus christ

Dude ffs half the reason most of us played chivalry for thousands of hours was NOT the combat alone. It was the charm and atmosphere you got from sound and storytelling in the maps and getting to 'role play' those sides. We have a living breathing example of an EXTREMELY similar game and what made it replayable. Don't deny something away as if it weren't important when it was HUGE to the games longevity. The lore and sound etc didn't make the cuts because of budget, time and their core goal being combat first. Saying a game doesn't need lore does not add to the conversation and is just a blunt statement. Me and dozens of people on my friends list can attest to these things making us play chivalry for so long. Mordhau does suffer from no lore because why should I care about dudes fighting over a thing because. All humans need direction and context.

At this point I don't see why not. My immersion is already destroyed by skinny naked men throwing firepots yelling 'have at them boys' apparently being mercenaries... It's funny and all but fuck me the game already takes you out of it in so many ways you may as well go a bit fantasy with your level designs and armour as long as its not Elder Scrolls level.

I was OK with archer pre patch and they have enough power to turn the tide with good aim, especially more then 1 working together. What I'm not OK with is adding all these other stupid projectiles that one shot anyway and having the other mechanics like horses achieve the exact same thing they were trying to avoid with archers. It's like fucking pick a direction.

Who the fuck is gonna complain to a server provider but the most Karen of Karen's. Like they'd care anyway since it makes them money and people complaining clearly don't pay for their own servers or they'd be banning all these edgelords themselves.

Yeah but this is a stepping stone process, one problem at a time m8. Facehugging Accel playstyle is cancer and this patch helped to encourage people to stop it, though some of them are still bloody trying.

It's just a collage of stealing scenes from the original movies and making them shitter for "omg it's just like the scene in (insert any of the originals)!!. That's called being lazy and does not make you smart or show respect to the originals as they are just so numerous and obvious.

Luke was not Luke and they could tease a Saber fight with Kylo but not deliver it, fucking pls. I also cannot believe that Luke somehow turns into a Force ghost or whatever the same way as Yoda, as the same fucking day he is being lectured by Yoda still.

Leia should have died as there was absolutely no reason to give her bullshit superman powers to save herself when the actress is dead anyway.

Fin should have died so I can actually maybe have given half a fuck about his character but nope we can't have the SJW crew die, just the oldies lingering from the Era of the better films. Gotta force that black Asian romance with absolutely no actor chemistry or attention given to their story.

Rey just continues to be a bullshit Mary Sue overwriting all the training every Jedi and Sith ever had to do to get to where they were skill wise. Continues to be a boring one dimensional character who uses one slightly pissed off facial expression.

The constant comedic relief scenes just made me more mad like they were saying to me "hey look, we're ruining a whole popular franchise right before your eyes and there's nothing you can do about it, isn't that funny?!!" No FUCK you house of mouse it's not fucking funny.

They killed Snoke after hyping him up to be some big bad ass with some connection to the past or at least the old ways of the Jedi and Sith. We have no clue who he is or why he was bothered to be introduced if he was just a big ruse to further Kylos retarded storyline.

The whole movie is a fucking mess that seems like it was made by children with downsydrome who watched all the movies once and wrote their own fantasy script with the aid of a single adult trying to make it slightly coherent in places. Setting up for a rather boring episode 9 that I am not going to even watch because who the fuck cares about Rey and Fin when they've had so little effort put into their characters.

I don't think an animation overhaul is as simple as you think lol. I also believe that all those other bits of content would be held back until they fix these core issues anyhow. Patches will take longer as they are tackling the more tricky problems now, I'm sure the art guys have been working away in the background as well. Coming from my own experience in regards to maps, it's very hard to know when good enough is good enough. We already know they are perfectionists so I bet they struggle with this issue as well, even releasing the current alpha maps wasnt probably ideal in their heads.

Also creates moments of tension when all the teams meet and there is that awkward pause of what team is going to attack who first. Then absolute chaos ensues. Would work even better with maps designed to make them all meet at a central location imo.

It doesn't matter which way you put it these people helped FUND the game not make them profits afterwards. They can miss out on one god damn item. It's not goinh to make a player play the game any less or enjoyvit less and if they do they are stupid. I liked seeing kickstarter helms in chiv even though i didn't have one. What i didn't like is how they then gave them to official admins

Community can't decide what excuse is real to use for the devs slow progress. First it's they quit their jobs to work on this game now and they're a small dedicated indie team and then it's oh they still have to work their jobs thats why it's slow. Then it's excusing the fall off of players because the game is a 'niche' but that doesn't explain predominantly chiv veterans quitting the game as well because it's just not fun. Reality is this full release game is still being treated like an alpha whatever product and not investing money back into that product doesn't shine a bright future for it. By the time it is fully fleshed out (if they even stick around that long) how many players will even be left.

From what I've seen from Chivalry 2 it looks 'choppy' because they want everything more readable instead of Mordhaus weird fucking neutral oversmoothed animations that are hard to read and makes the meta boring. Replacing that depth with more attack options. They also said they want a focus on 1vX which coming from Mordhau would be a breath of fresh air. Chivalry 2 may not be a great competitive game but we all know it will be more FUN then Mordhau in a hop on and play aspect. Even Mirage was more fun and had more soul it just had no players and wasn't expansive enough to beat Chivalry. I disliked TBs decisions as much as any other chivalry player but people pointing at animations that look fine to me is weak. I have more hope for Chivalry 2 then I do Mordhau at the moment.