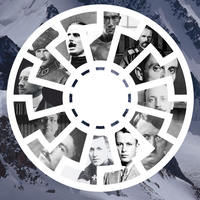 Can't you kick them while they do this? I usually just kick whoever tries to stick to my face

I’m going to assume that you are making an argument because you’re on the side of the fence which falls on the support of historical accuracy.

Now please go back a re-read what you just wrote.. smh

Honestly, it's not even an argument anymore. I just half assed it because I couldn't be bothered because it was getting too retarded.
Anyway, when we get modding tools, we gonna party boi 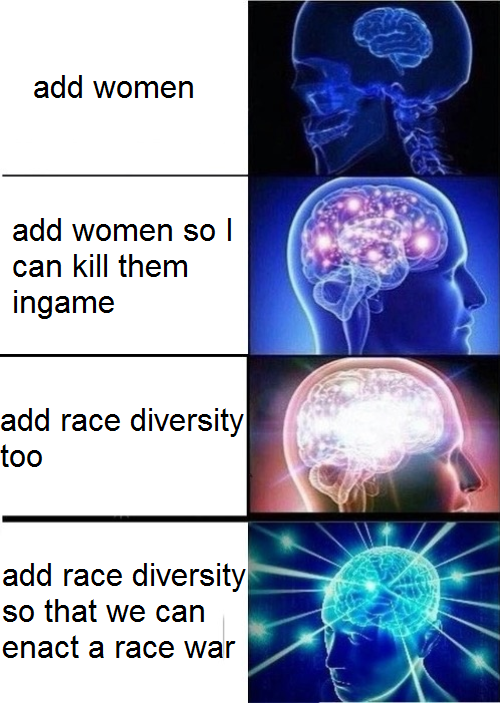 I have no regrets, please add

@NikolaiLudovik said:
Yeah , lol.
There is no gameplay reason. And there is also no actual need for them anyway. I keep saying that modding tools will fix it.
People make this absolutely retarded argument about "muh immersion"
"why does x feature exist and breaks your immersion, and women can't lololol"

Those "muh features" serve a gameplay purpose, even the lute.
What does women serve? Nothing really, just customization that wouldn't make sense.

What's the gameplay reason for the carrot, the frying pan or the turd?
Bad argument is bad.

@DefendinMyBase said:
So women are comedy then?

Yeah , lol.
There is no gameplay reason. And there is also no actual need for them anyway. I keep saying that modding tools will fix it.
People make this absolutely retarded argument about "muh immersion"
"why does x feature exist and breaks your immersion, and women can't lololol"

Those "muh features" serve a gameplay purpose, even the lute.
What does women serve? Nothing really, just customization that wouldn't make sense. 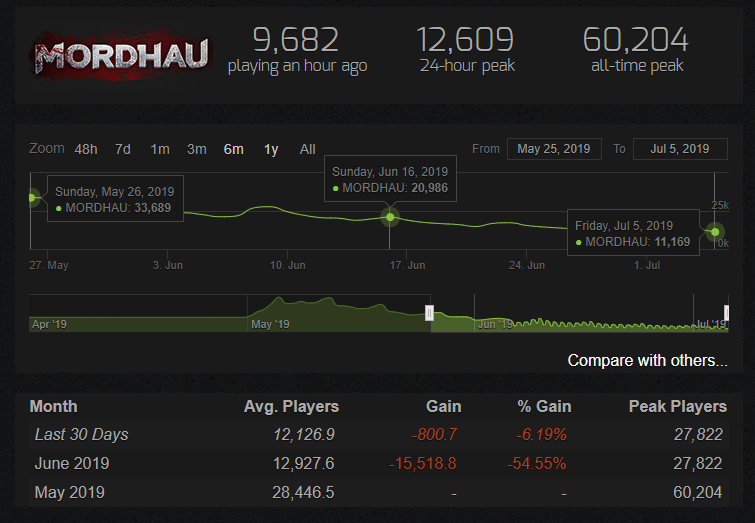 As you can see in the picture above (that I have edited a little to see multiple points in time) the playercount has been consistently dropping, understandably due to not all people who own the game playing, but at the same time, because there is literally nothing... new.
Crossroads was a mixed bag, the javelins and heavy handaxe were a welcomed adition, but it definetly wasn't enough.

To Triternion, I know you guys are probably stressed out, I know you are working on the game, but some communication regarding the state of things would honestly be appreciated when it comes to the game itself. We couldn't care less about what gaming journalists say about you or Mordhau. We care about the game you created. Don't become like TaleWorlds too.

Here are some key features that are quite needed, let's start with the small stuff:
-Votekick Team Damage% and being able to type a reason for said votekick. That's all that its missing.
-Duel gamemode (Just do an emote while looking at someone to offer a duel, simple as hell), this removes the need of constant moderation on that type of servers. 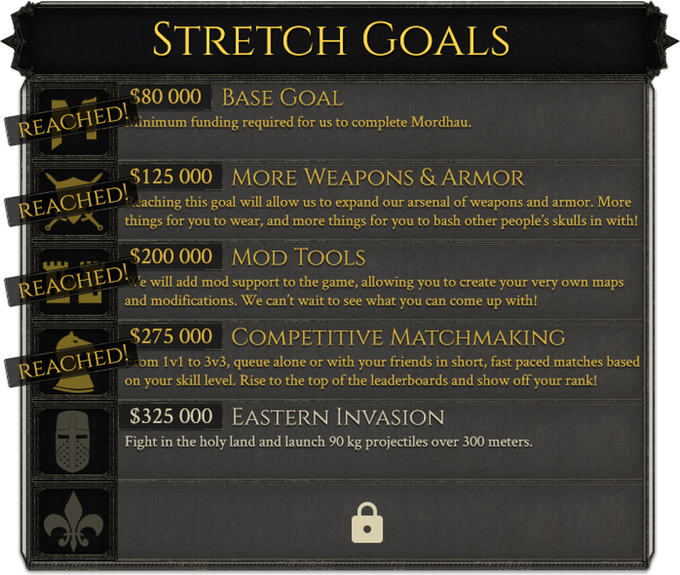 -Modding Tools. (This will help us, your own community, bring in more maps, more content, hell, even more character customization ,other armor pieces/maps that you can add at a later date.)

-RANKED MATCHMAKING. I can't even emphasize enough on this. CS:GO used to be the same. Little players, not much going on, then boom, ranked matchmaking and the people's interest get's back on track. (yes, skins played a big part in it too, but without esports and competitive matchmaking, the game would've never come where it is just with skins)

@Deadmode said:
You do spout some utter shit @Clyde.

That utter shit appears to be quite factual as far as it seems. Maybe exaggerated, but not to be dismissed.

@de.tail said:
Now, potential issue/toxic/racist behaviour you probably won't be able to ignore are players on your team or the enemy team that decide to single you out, for how your character looks or for what gender you decide to play as.

That's probably the funniest shit I have heard. Never seen this happen in any game out of malicious intent, if it happened, it happened a few times for the memes, since I started playing games. That's some pessimistic scenario.

Mount&blade had female characters and the world didn't end.

Mount and Blade had females and 95% of the time they were used as naked with names like Daenerys.

I am not against it but do not act like it will have a positive impact in the game.

Yeah dude complain about THAT in the same game where u can cosplay as shrek and run around naked with a pan.

Hope they won't fuck up how the armor looks, I would rather not see thicc thots in this game, otherwise, it's fine.
Not like this thread has any point because modding tools will allow for anime girls (thing which I said before) wielding large swords. So as far as I am concerned, female characters are not a priority until we get:
-Modding Tools
-Siege Mode
-Duel Mode
-r a n k e d m a t c h m a k i n g

That's all I want. And I believe it's what the game needs quite desperately.

@DefendinMyBase said:
Bump for actual game feedback instead of politics

Not a bad idea, we could do with something like that

I thought the nazi's were gone? What year is this?

It's 2019, but conservatives have been partying like it's 1938 for some time now. You would be right to be shocked and dismayed by the upsurge in far-right activity, up to and including real swastika-wearing Sieg-Heil-shouting Nazis... if someone in your family fought against the fascists in World War II.

Oh yeah, I won't forget the decades of communism we had to endure and persecution because we weren't on the right side of history.
also, this "conservatives partying like it's 1938" really shows you don't understand that it didn't happened out of no reason, it happened because of marxists poping up and gaining influence and power (just like today), so that's why it's the same, but who am I to talk, this is turning into a stupid political discussion.
After all, it's just "conspiracies", and I am a toxic white male, am I right?

@Gambit said:
What do you propose to fix it then?

hiring someone who knows how to code censors/autokicks

At first, Chivalry's official servers required 50 or 51% of positive votes for a votekick to pass. It displayed the "team damage" as a percentage of their overall damage in the little box. Mind you, ANYBODY from any team could vote kick btw.

Players were too harsh on their teammates and lots of people were kicked for no actual reason.

They later increased it to 65% of positive votes.

Still, people would rant in the subreddit and the official forums saying other players weren't voting racist scum or team killers and griefers went unpunished because the votes failed.

Just add an automute, and people will still find ways for being toxic. Why? Because you're dealing will people.

Automute and ban repeat offenders. Le ebin "do nothing" argument is completely useless. At best, you are naive and believe that nothing can be done (which isn't true, since you can have automatic muting, automatic suspending, and automatic banning for writing things like "Gas the Jews" or having blatantly Nazi names). At worst, you're promoting doing nothing because you're one of these edgy Nazis and don't want anything done to stop you. Doing nothing doesn't work. These immature children need to be banned to learn lessons.

Edgy nazi here,
Sorry mate, but I would prefer this game not becoming R6S and get kicked for every little thing, even if it's a joke or not, because people actually take it seriously and get triggered like you and require an actual censorship system, when you could just mute them and be done with it.

Yeah, we could do with some more options, in Chivalry it really felt like you could say stuff for most situations and even have some funny dialogue out of it. In Mordhau, although it's pretty good, I feel it has some more to push to get the same level as Chivalry.
This would really be a welcomed addition.

I get both sides of the regen debate, but a command is too much to ask for? That's all we need. We don't need them to fucking fundamentally change it and just turn it off for the entire game.

Basically, Playing from Romania in the Wild East and can't get a connection better than ~70, sometimes even 100 ping.

This video by Stouty shows that perhaps we should disable regen to prevent those outnumbering one guy (in 1vX) achieving an advantage and switching to avoid combat.
Perhaps a command for server owners would be nice. Not necessarily removing it from the game, but just a command.

well, it's just 1000, so basically, less than one horde match or two frontline matches.

I would rather have shields with a somewhat smaller hitbox, not necessarily so that they become useless, but more easy to overcome.

@LetsFightíngLöve said:
To all those folks arguing about muh realism to not have womens implemented, just remember you can couch with a carrot on a horse and slice through plate.

And to the folks arguing muh immersion as a basis for having the womens implemented en masse in a "historically accurate game". You guys are just so confused I don't even have more words for you.

Same retarded argument as with Battlefield 5: "Ya can jump off a damn plane and blow it up with a rocket launcher mid air! So what about muh wamen, you bigots!!!!"

What gameplay purpose does women provide? None.
Does it change the gameplay? No.

What does the carrot do? It lets you humiliate people by killing them with it.
So it serves a gameplay purpose.

We don't need the game to meet the "muh diversity" quotas just because you want it.

There will be modding tools anyway, so you are going to get anime girls most likely wielding huge swords, so it's not like these posts matter anyway. Hell is coming.