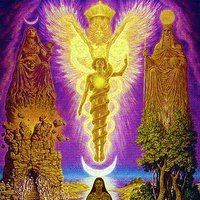 You have to go to your forum profile name (top right corner), click the dropdown arrow, click "purchases," and then you can redeem your kickstarter rewards there.

For the Supporter DLC, you'll have to click the key, then redeem the code via steam.

I think one reason it looks floaty is because he's using binds over the angle system. Tbh it seems like the superior option anyway

If you have to jiggle your camera every time to get the correct angle, you're telegraphing your swing even before you do it, and also causing yourself extra hassle aiming. You also can't get the angle you want every time since it isn't 100% on detection, or you might just miss the angle due to stress. When viewing it, however, the swing looks like it comes out of thin air with no momentum - which is beneficial for the player obviously, but looks janky to the viewer.

Here is the cycle:

1: someone discusses problems or has an idea with massive potential to impact the game
2: everything is initially fine and people give their feedback
3: Giru notices that important stuff is being talked about that could change the game, so he hops in the thread to give his own opinion, usually civil at first
4: people disagree with Giru and try to explain themselves
5: Giru calls people who disagrees with him bad players and bad people, then shifts the topic away from the original purpose and makes it a personal fight between egos
6: New forum accounts either pop up out of nowhere or hardly used accounts become activated to shit on the people who are arguing against Giru and to like all of Giru's posts
7: the entire thread completely fucks up and nobody is focused on the original point anymore; it's devolved into pure stupidity
8: the thread ends itself or is closed
0: wait a few more weeks and it happens again somewhere else

Please stop doing this. Forget your egos at the door and just discuss things like humans and not apes.

I feel like I predicted this about a week ago

Firstly, the time frame in which someone can hit you with an accel or turn their swing into a drag overlaps considerably. You often don't have time to figure out which is which, and so you gamble and pray.

Secondly, the visual cues for drags versus accels are so subtle you often cannot tell the difference.

Here's a thought on how to fix this. I don't know if it's possible but it's worth mentioning

If a new layer of animations were added to attacking which is triggered based on mouse movement sometime during windup and/or release, which would simulate the exaggerated turning of the body towards or away from swings, we could more easily read whether or not the attack will be a drag or accel.

To explain this, say my plan is to do a drag. I'm going to turn my mouse away from the attack to delay it. In doing this, I'll trigger a new layer of animation which twists my character's torso, hips, and shoulders in such a way that my character is visibly throwing his body balance opposite the direction of the swing/stab. He's not just magically pivoting his feet like an action figure, his entire body is moving away from the swing/stab.

If my plan is to accel, I'm going to turn my mouse towards the attack. In doing this, I'll trigger the other layer of animation which twists my character's torso, hips, and shoulders sharply towards the direction I'll want to hit in, visibly putting all character's weight on the swing/stab.

tl;dr: if turning your character during your attack made him do an exaggerated animation to display your intention of dragging or accelling, then it would be way easier to read them without gambling

Make a really big sword - a sword bigggger than all the other ones, so big that it can hit archers from far away

@Runagate said:
He did what @Frise said. Look, not everything that kills you that you can't deal with right away is bad for the game.

I said "Things that are hard to counter are not inherently bad".

I did not say "This drag should be possible".

In context as a response to OP you are very much implying wessex drag is not bad. What are you trying to do here? Do you think that wessex drag should be allowed in mordhau or not? if not then why such a snarky remark?

Well, he made a thread called "the Frisedrag revealed" in which he names this old chivalry technique after himself, and made a cheeky video where he shows you a tutorial of how to perform it.

He clearly likes the move enough to name it after himself, even when it already had a name. This game is in alpha now, so making a "tutorial" rather than a "report" tells me that he doesn't think this is an exploit. If I were to think something is an exploit, I certainly wouldn't put my name on it, since exploits are bad things you want removed asap, and alphas are the place to do it. I'm pretty sure he's for, rather than against it, unless he's changed his mind after seeing other people's reactions.

@Frise said:
And @DerFurst, what you state is true. It's a problem with chambers though, not with drags.

Imagine a game of 'rock, paper, scissors' which claimed that every item counters a specific item but is weak to another. However, in actuality, rocks are inconsistent in defeating scissors based on where your hand hits the opponent's scissor hand, and also had a chance to destroy paper based on an additional diceroll exclusive to rocks.

This is how the game balance feels right now with how easily drags can counter chambers. It's just not intuitive at all, and doesn't synergize well with the other mechanics. The devs themselves intended primarily for morphs to play the role of countering chambers, not dragging or accelerating at odd angles to make certain chamber angles nearly impossible.

Certain drags, like the Wessex drag and 360* spin drags (like on the other thread) definitely need to be removed. Drags, as a concept however, are fine, and add depth when they have proper visual feedback and counter-play. My main complaint is that chambering needs a rework to be able to counter y-axis angling of drags, and perhaps chambers need more forgiveness when it comes to drags or accels somehow.

If you can't chamber overhead drags aimed at the feet, how in god's name can you chamber wessex drags that hit you on the complete opposite side of the body

the chamber mechanic needs some extreme help right now, because there's too many dragging techniques that easily circumvent the entire feature

if you can't reliably chamber due to unintuitive drags, there is no reliable way to defeat feints, and this game inches closer to being a literal chiv clone, meta and all.

@Aria said:
What does

Regarding my earlier question, it was explained on the subreddit that they are for movement acceleration based on armor type

So from the looks of it, there doesn't seem to be a reason to go naked as opposed to light armor unless there's some perk or you want to be a caveman

Yea, that aspect of the warhammer is pretty janky. The fact that it has such a short recovery after a successful hit makes bodyfeinting very easy, especially with a fast character. It gets really stupid when you add shields into the mix.

There's always going to be some form of "drag" in the game. That's inherent to the nature of swing manipulation. If you can speed a swing up, you can slow it down. You'd never be able to "remove" them, because drags are the opposite of accelerated attacks. It's a relative concept.

I get the feeling that most people's problems with drags are visual. It just "doesn't look right." I honestly think they're cool from a gameplay standpoint, but visually they do look silly a lot of times.

The only way to "fix" drags would be to increase swing speed to a very high degree so even decelerated attacks visually look normal, then decrease the parry window even further. You'd need to decrease the parry window otherwise you'd have a non-stop back and forth of fast, easily parried slashes, and that would be mordhau. However, I get the feeling that if you increase the speed significantly enough to remove drags visually, you'll run into problems with attacks being too fast to visually process no matter how good you are, and latency making fighting ridiculously inconsistent. You'd also ruin the current concept of chambering since attacks and angles would be too fast to process.

@Knofan said:
Where can i report persons that ruining the game by, verbal assult and things like that?

Here are some coping options

A little explanation before I got into suggestions:

Diagonal or overhead attacks dragged at an angle to hit the legs are nearly impossible to chamber (and for parrying require you to crouch and/or look down very unnaturally). I haven't been able to chamber this attack at all, and a few others I've talked to ingame (Naleus, Bodkin, Havoc) haven't been able to either. To theoretically do it, you'd have to crouch, look downwards, and then flick the mouse within the same 30 degree increment upwards to chamber. This is horribly unnatural and very unintuitive, especially since these attacks will initially appear to be regular diagonal swings, baiting you to attempt chambering them right away.

I don't believe this should stay, since it's a major flaw in the current chambering system. If someone can footdrag to consistently nullify someone's chamber attempts, then chambering becomes a far less useful feature to counter feints, letting feints remain more potent than intended on swings and chambering less useful overall (although for stabs they seem to be good so far).

So here are some suggestions that could help fix this:

source: I talked to three people I already knew didn't like the game and nobody else