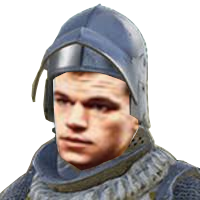 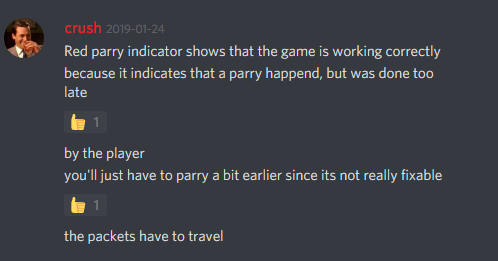 I know playing on high ping sucks, but its not much they can do about it.
And red parries just shows by how many milliseconds you missed your parry with.

It could potentially be fixed. What you could do is just after a strike wait 50ms for the parry signal to be received. That is, have some form of client side parry up to 100ms. This would only kick in if a red parry was detected, so it wouldn't just increase the time to block.

That would create alot of visual brokenness. Try to find a server below 50 ping, anything above that is too high. 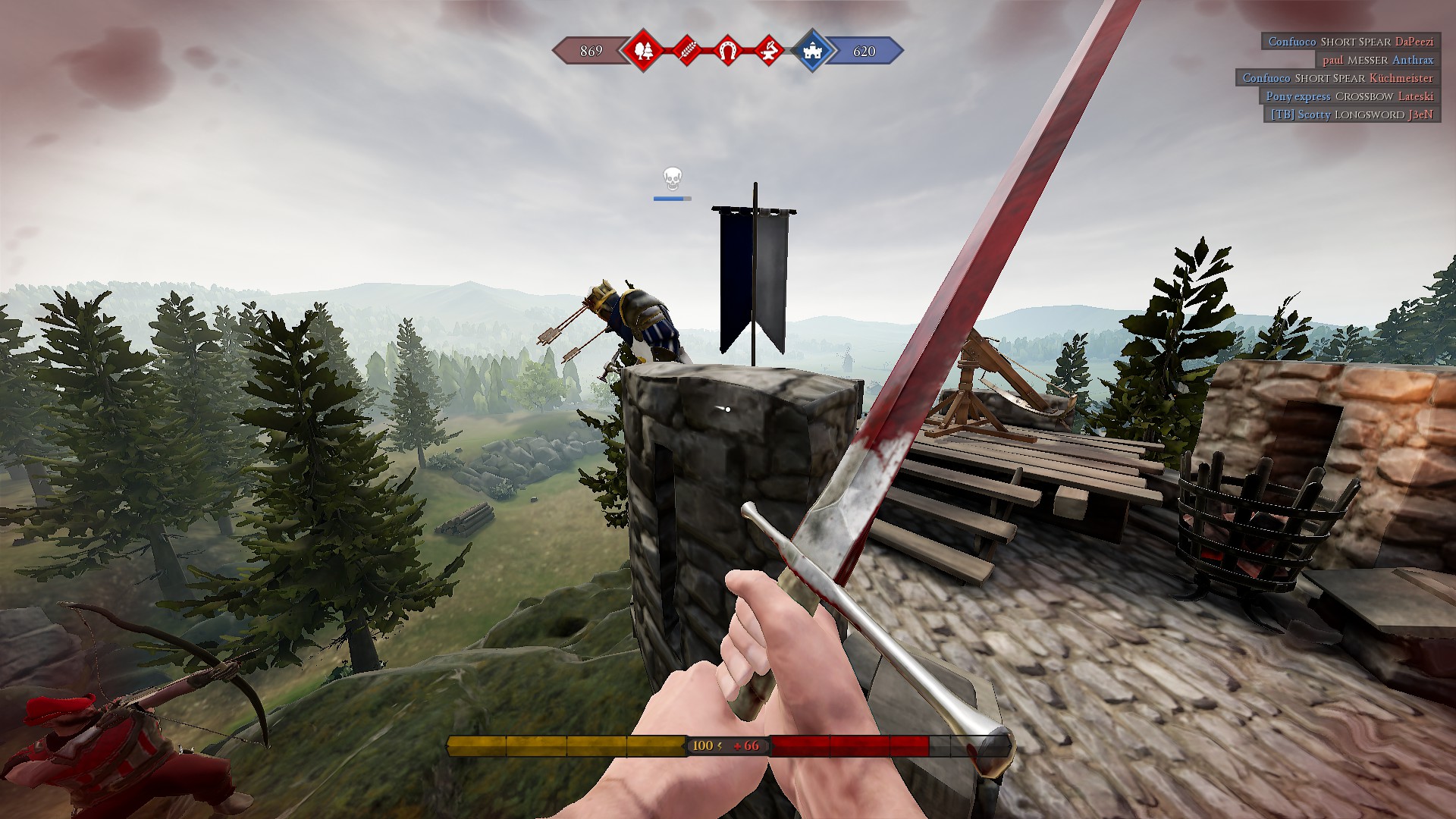 @Đ٣ąҜєM.livevorOrt said:
I think the way shields worked a few patches ago was very well made, dont know exactly which patch it was, maybe 14? 15?

You had to block very close to the point of impact, which made it possible and pretty easy actually to hit legs for example when a guy was holding shield up midair to block a swing to the body. Im sure you guys remember.

Back then it was a bit too much though, cause with Targe, you could hold the shield all the way down and still couldnt block some swings to the legs. And that was pretty crappy actually. But at that time, some people had a very nice playstyle with overhead drags to the legs.

Right now, its actually exactly the opposite. Even with Targe, as long as you block at least a bit in the right direction, no blade can pierce. Id prefer something in between there, that would fix a lot of problems people seem to have fighting shielders.

At the same time, shields should be able to be played actively with. Right now, my left arm feels like the one of fucking Ephialtes in 300.

I totally agree. Chapeau for not being biased and providing valuable feedback.

Alot of us have the same view but crush doesnt seem to like this. I hope he considers it.

@Stouty said:
Drake aka eu resident shieldtrash actually refuses to duel me now which is hilarious

Maybe you should also add why I did.

Every time you got smacked ur ugly twat face, you ran across the entire. fucking. map. like speedy https://youtu.be/cc-3wVQuD7k?t=51
and wanted me to chase you. And not once, I remember at least 4 times.

I dont run from duels, I didnt fucking once, Im not Jason. If u wanna fight you can come to me any time, If you wanna play hide and seek, go to your local playgrounds where you belong.

I say you duel Jason tomorrow, if you do not run @Đ٣ąҜєM.livevorOrt ?

I think u should both should ft10 since u guys are shielders. No point in duel shield vs non-shield.

I dont run from duels, I ignore shield atm cus they arent balanced..

@Lionheart Chevalier said:
Shields don't really have a role. They're not good at blocking hallways, chokepoints or 1vX since they stam out quickly and come down when hit, they aren't good at dueling since it takes little IQ to stam out a shield user, I can be winning a duel with full health but I've lost the minute I get morph/feint to kicked, ftp, miss or double block a gamble... They're not good for learning the game because it simply lets anyone spam the shield to win and they're clunky. Shields are so incredibly weak to kicks, you can raise it when feinted, see your opponent switching to a kick but can't move away or counter kick because of raise/lower delay plus ping.

Shields aren't even good at blocking projectiles. They're ok at everything but worse than 2h or even 1h alone in most scenarios, especially where decent opponents are concerned.

They're clunky and not fun to use or fight against and clearly this is the issue. Telling people who complain about current shields being pointless that they're smoking something funny is not constructive and turned this into a shit fest. Do not go into semantics with me because you refuse to rub two braincells together and kick a shield user or run away from 1h.

Shields are blocking melee like a wall, but cannot properly block trowables. Its a broken mechanic atm..

The title said "useless". What ur describing is not the meaning of useless.

Also, I cannot beat shield players like for example Fandalf and im not a low level player. Im no top player either but definitively not a low level either. I already have 1300h while Fandalf has 500. If I need 6k comp hours inorder to beat a shielder, then theres a problem here.

Maybe u can prove me otherwise, go duel Fandalf and record.

Those who think shield is useless, please list ur diet plan and whatever u smoke afterwards. I need that shit.

Go to you appdata folder (C:\Users\ yourname \AppData) You will have to enable show hidden folders in options to see it. You will see 3 folders (Local, LocalLow, Roaming). Explore them and delete every folder named UnrealEngine or Unreal Engine, there should be a couple of them and then try to start your game and see if it works.

This page alone can be compiled into a book

TRYTE, Ive seen u play, which means that likely u fixed the issue. What was the problem and how did u fix it ?

Do u have any other UE4 engine game ? If yes, try and see if they start up. also u could check the crashlog in Mordhua and send to the devs.

Go to you appdata folder (C:\Users\ yourname \AppData) You will have to enable show hidden folders in options to see it. You will see 3 folders (Local, LocalLow, Roaming). Explore them and delete every folder named UnrealEngine or Unreal Engine, there should be a couple of them and then try to start your game and see if it works.

About parry, I dont think parrybox should protect feet if u dont look down, which is the case now.

If chamber window is decreased then late chambers will be useless, it wont be as fast as it is now.

@Jax said:
Morph matching was skillful when the timing window on it was miniscule (since chambers had tiny windows) - now that the window has been opened up it's way too easy to match attacks. I think the current plan is to remove it for #18 and if needed we can add it back in but heavily nerfed.

Yea I think it'll be worth testing out, and this will give us more variation. Chambers counter feints, and morph could counter chambers (those gamble chambers) which will higher skillcap (in theory).

Maybe add a role in 1vsx to chambers too.

Im experiencing alot of ghost swings, not only by me, but also the players I play against. Alot of times I swing trough them and they swing through me.

Does the stuttering start in the beginning of the game or later after played the game for an amount of time ?