Hello,
I was banned from the Mordhau discord for posting an edgy image on the “Off topic“
The admin wrote “time out 10 minutes“ and i got muted
Few moments later i got banned
This was more than 1 month ago
I apologise for posting a stupid picture on the discord
May i please get unbanned so i can join the Community again? Please

When playing Invasion mode or frontlines mountain peak i always wondered, why cant just destroy the cart/ram when you took it over?
Wouldn't this make more sense?
The team who just got their cart/ram destroyed will have to use their engineers to repair the cart/ram to continue moving forward

Same goes with the barrels in camp/taiga
When dropping a barrel, the enemy can either destroy it by hitting it. Or you just pick it up again to bring it to the target

Hello guys, before I start I have to say that I have no actual experience in modding and that everything I bring in this thread is just an idea I had for a long time. Maybe some of you might find this interesting and could imagine bringing it to the game as a mod.
Also notice that english in not my mother language and I appologize for my grammar. And my drawing skills...

The realism mode would contain the following things:

1. Damage based on hit angle. 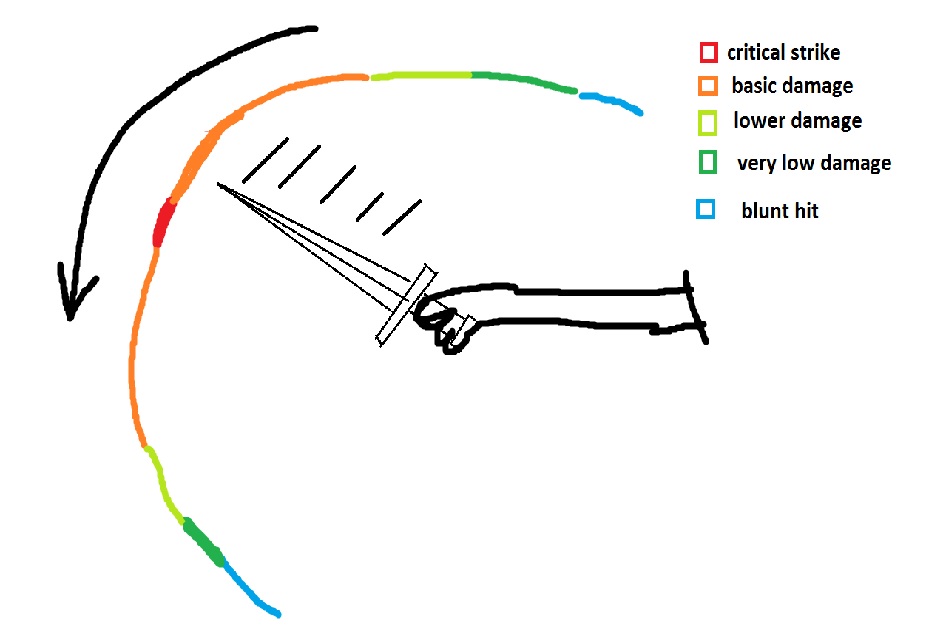 The ammount of kinetic energy and damage you will deal to your opponent will be dependant on the hit angle. Means there will be critical strikes (sweet spots) where you might deal severe damage to your opponent and drain more stamina if they manage to parry it.
Is the angle bad, the damage will be reduced and might be completely negated. Weaker hits will barely cost any stamina to parry.
Keep in mind this will automatically nerf drags and accels as the damage output will be way too low. Riposts and Chambers, on the other hand, will benefit drags and accels.

2. Momentum based damage.
Just as you do bonus damage while moving on a horse, this mod will let you use the momentum from your movement on foot aswell. Means striking while standing still does overall less damage than moving towards your strike direction . The movement of your enemy will also effect the damage output of your strike. (Stabbing an enemy who is running up to you will punish him)
The bonus damage will be seen as a critical strike as i explained in "1.".

3. Weapon types and armor rework.
Killing a knight in plate armor with a few slashes of sword is not what you can call realism, so this needs a rework.
My idea to fix this would be to add movement restrictions for people in heavy armor while adding a bonus for light armored folks.
You will have to decide, whether you want to be slow and well protected against most types of weapons, or to move freely but get wounded pretty fast.
Heavy armor will make you lose stamina faster by almost everything you do. Light armor will be much more forgiving.

4. Sprint
You can walk, you can run, but you can not sprint... I would love to see another use for stamina in Mordhau.
Sprinting will add tons of new fuctions to the game. Whether its running away from a fight, catching someone trying to run away or just getting from A to B faster. Use your stamina wisely tho or someone might catch you out of breath.

5. Dropkicks
This is pretty much self explanatory. Sprinting up to someone while he is off guard and performing a risky dropkick to knock him down on the ground is not just useful in battles but also extrely fun. I would love to see that kind of stuff in Mordhau.

So these are the things that I came up with. I can imagine these will be very hard to implement, but I'm glad I could present my ideas on this forum.

Let me know what you guys think. Which of these ideas are your favorite/least favorite? I would love to hear some additional ideas and/or critisism.

Maybe there will be roman empire mods as the development progresses.
I can imagine this happening really quick when the SDK comes out

Yes, this is the best way to balance maps out
They should also remove the 5 sec death penalty in the Wardens own castle. I died because I went inside a room in the castle as the Warden. And died another time because i fell down the ladder, but the 5 seconds wont let me get back up.