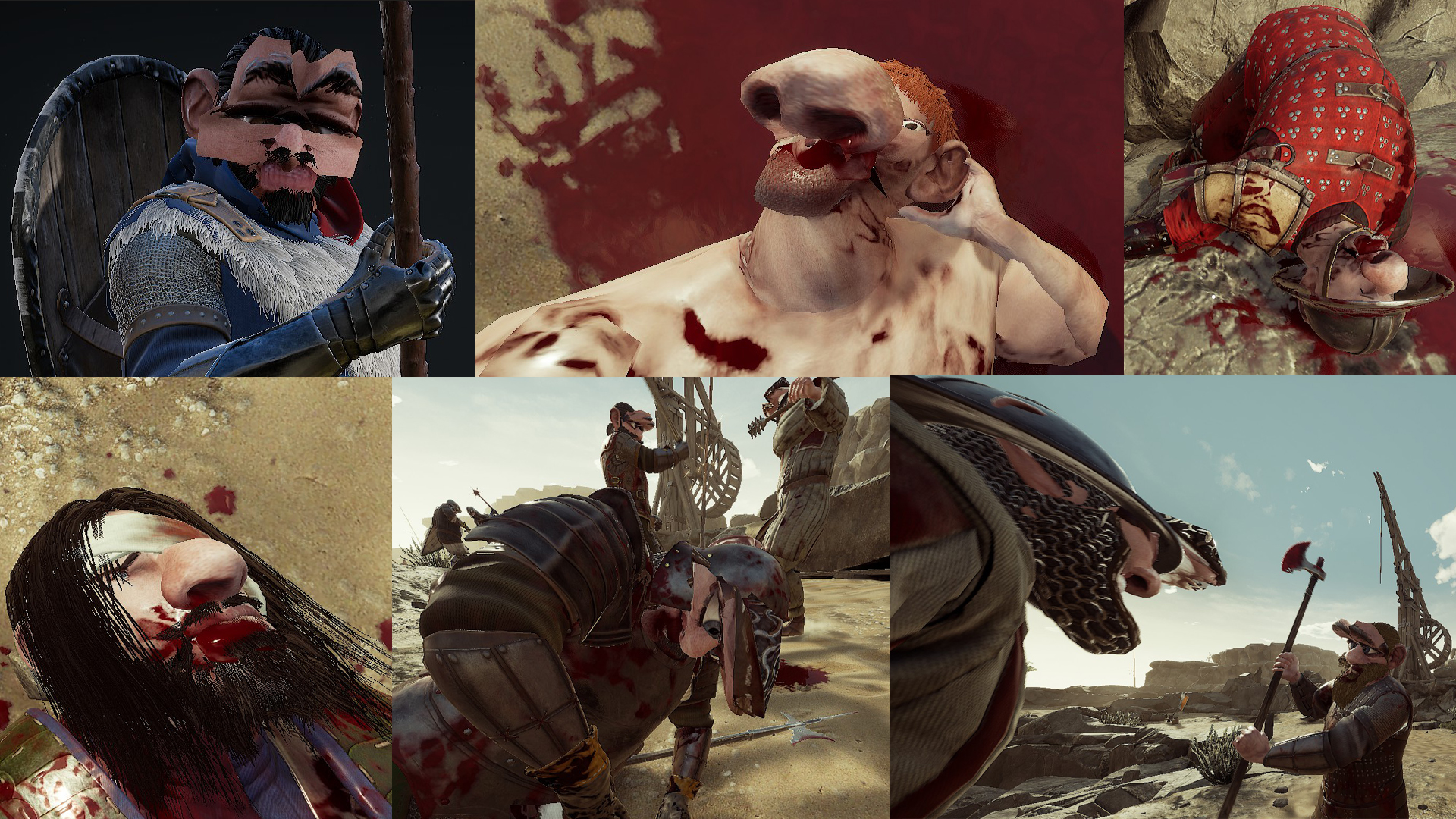 I´m glad I´m not the only one. Is this a halloween special?

If you switch to alternate mode with pickaxe the wrong side of the pickaxe will get bloody when fighting.

Shield colors can vary from actual team color (could be fixed by now, seen a time ago)

Heavier throwable weapons (axe, arming sword, mace.. didn´t work with dagger) can be thrown through the floor when aiming straight down. This only works on surfaces such as gravel and dirt where they dont get stuck - like wood and fine sand. Seen on all maps.

I have noticed the following thing in Skirmish mode: Look at a weapon/object on the floor and keep that object in focus. A pickaxe for example. Now the round ends and all players will appear at the respawn. The object will be still highlighted, no matter how far away it is and where you look. To toggle highlighting again you have to approach the object and look at it again.

That thing with the startup time seems to be fixed for me, could be some driver updates or alpha version update. It loads twice as fast as chiv now.

Another two things I noticed.
First, the chat sometimes disappears even if somebody wrote a split second ago. Then you have to press the chat button to make it reappear, press esc and read it again.

Second, if you try to quit after a match has ended but you wait too long you get your loading screen for the main menu - and suddenly another loading screen appears and you are back in the game :)

@Knight Nicholas said:
I classify pointing something out that isn't an issue as whining
But I'll go fuck myself

Pointing such things out could probably help the developers improving their game, I guess that´s the reason why they do some kind of alpha release. Anyway, I´m off practising.

@YOLANDIVISSER said:
Non issue tbh. UE4 games are gonna take a while to boot up on your shitty 7200rpm HDD and you're complaining about 30 seconds once per day because you can't free up 6gb in your SSD.

@RussellX3 said:
Is anyone else getting long startups? Sometimes the game takes 30 seconds or more to load, other times instant. The game runs fine on my GTX 970 so I have the required specs, just don't know why it takes long to start. Chivalry loads instantly for me. I hope it isn't just me :(

I know why, out of all those specs you didn't list your storage. I bet you have a slow-ass hard drive.

I have very similar specs to you, with an i5 4670K CPU, 8 GB RAM, 64 bit Windows 7 Pro, and an MSI GTX 770 Twin Frozr Superclock Edition. BUT! I have a Samsung 840 EVO SSD, instead of a traditional hard drive (ok to be fair I also have two additonal hard drives as auxillary storage, but Mordhau and Windows are on the SSD so this is not relevant).

Game has almost zero loading time for me, either to boot or load into a game. Can't even fully read a single menue tip lol. So, I would bet money that that is your problem.

You probably don't notice this with chivalry because it uses an older, less complex engine & it's a release title that's had years of optimizing.

If you've run the game before without shutting your PC off, then Mordhau is loaded onto your RAM and you would see near instant boots. RAM is similar in technology to SSD's, and is actually massively faster even. (Note: Windows 8 & 10 will keep some programs on your RAM even when you shut the PC off, consuming a teeny bit of power continuously in order to speed up commonly used programs. So if you see a fast load even after a reboot, this might be the reason).

TLDR; buy an SSD and add it to your computer. All desktops can support multiple hard drives and a select few laptops can too, but you can always replace the laptop's hard drive with an SSD, too.

I installed Mordhau on my WD Blue. The WD Blue isn't blazing fast, but it shouldn't take 30 seconds to launch a game like Mordhau with it. There's not much room left on my 850 Evo, so that was out of the question.

I expect launch times to improve. Or, atleast add something to look at while the game is loading, instead of a black screen.

Yes you´re right, my "old" HDD is the worst part of my setup. But still, the startup time was noticable longer compared to other games - just mentioning :)

@RussellX3 said:
Is anyone else getting long startups? Sometimes the game takes 30 seconds or more to load, other times instant. The game runs fine on my GTX 970 so I have the required specs, just don't know why it takes long to start. Chivalry loads instantly for me. I hope it isn't just me :(

Since this is alpha I have some suggestions for you guys :)
First, a sorting feature for the server selection would be nice. So that you can click on "Players" and it arranges it from full to empty.
Also a filter for gamemodes can be helpful.

Another thing i noticed when i first press "X" for an expression, my character stops walking. It´s just the first time, whenever I press it again it wouldn´t affect my movement.

finally got my key :)