Stop right there you criminal scum! You violated my mother!

This cannot be, you do this and requests like these will never stop.

It was clearly stated, that the reward for such a pledge will be LONGSWORD skin. I personally think this is unreasonable request and should be dismissed.

I personally... do not feel that much comfortable with the longsword, but i still use it. And its not that bad weapon. And I actually perform way better in team fights, where 1vX is frequent. I do suck at duels, but in team fights I just charge in my heavy armor, switching targets and my score is usually not that bad.

Greatsword is another weapon, never was promised at the kickstarter and the skin, imo, should not be presented to other weapons.

The kickstarter campaign was clear, we trusted Triternion and funded them. Lets not disrespect that campaign by changing rules in the middle of the run.

U discriminate people who never ate lobster. I vote for that option in my imaginary poll, which is superiour to yours.

I use this, provide good boost to consistency for me, since I'm not that good - scroll having three functions allow for easy morphs - while maintaing directional input on lmb for the freedom of it. 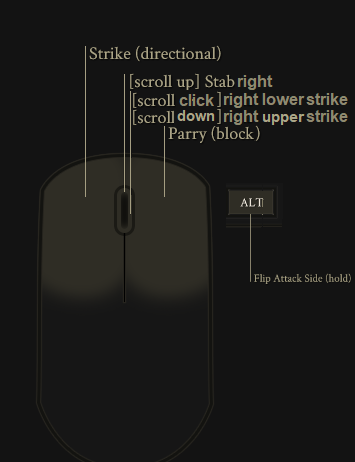 Its actually delicatelly cut one piece of wood and not separate planks, hand-crafted by Marox himself in such a way that it resembles separate planks and make you question your existence and everything you believe in.

How are you activaing it? Are you sure nobody used your key allready?

Zwei fest was on alpha release as well. The sword must attract newbs in some way.

Yea that does nothing, i tried the same thing - but there is also a flag in config files somwhere where you can actually tell the game to skip the splash vids - however, it will not start you faster as normal loading screen will take their place (the one that you see flicker when you simply delete them)

Yea! Down with the imperialistic capitalists!

Here's one: If you have problems with performance, resolution scale works magic. Even like 5% down will boost you up.

Yea, that was meme tbh imo.

Hey everyone don't be ashamed of your past. So we played chivalry.. No chiv, no mordhau (probably) so remember...

I found a hotel in Prague named Green Lobster. Who would win? It's on! The future belongs to the greens redy boi!

short one hand weapons could be rested on shoulder.

Yea the blue part is wierd.. i mean, think about the red team.. this is a discrimination againts reds. RLM!

I tend to stay away from suggesting anything since I'm not that experienced, but man do I hate the lunge.

Seriously if I would put one thing that makes me ALT F4 from the game it's this, someone is very far away, start his attack, next thing I see is him facehugging me with landed hit. I really dislike how it's handled currently and I agree with you.

In chivalry I would frequently rage when I got rekt, which is not the case here - I fear no humiliation, but the lunge..it angers me.

Welcome to Mordhau forums, where shitposts, memes and light insults molded the community to the point where it stands now. Don't mind the occasional cringe and cancer, we are all friends here in the end.

To stay on topic, I have 50 hours in the game, I suck very bad. I only use Longsword becouse I have the skin and my Chivalry playstyle was "charge head on and die" anyway. That's why I tend to join team modes more and have fun there.

There is not really much to say I guess, you have to try your loadouts yourself and see what suits you the best. Generally speaking, you will encounter longer weapons more ATM - so might take that into consideration when building your loadout.

There is also thread somwhere with damage values, altough that is subject to change as is everything at this stage.

Enjoy your stay, see you in game.

Don't forget this is not Mordhau, the game is not supposed to be fighting game.

It's supposed to be realistic RPG.

Don't get too discouraged when you get owned! (and you will, badly)

I gotta admit though, when the first videos came out - i was very sceptical about the fighting system - we'll see when it's out.

Also there is no mention of Marox in my post so no blasphemy.

The video is 7 months old. Lot could have changed. I gotta admit, I do not follow the game almost at all, but I will be buying it just to support my local dude Dan and give him money for a good laughs I had watching all the sjws cry rivers of tears.