Official invasion servers are still laggy most of the time, can the DEVS say something about this issue please? Lag on official servers has been a problem for over a month now : https://steamcommunity.com/sharedfiles/filedetails/?id=2086520482

There's only 1 server that isn't horribly laggy (Prospero 7) and even that one is getting worse. There have been multiple reports/ threads about this issue over the past weeks, why have the DEVS not replied to any of them?

This has been happening for weeks now; my ping will be fine (around 60) for a while, then suddenly shoot up to 120+ and stay there, along with high packetloss. This happens on all West Coast Invasion servers except Prospero 7 (the one in Seattle). I know that it's not just me, plenty of people that I've talked to have this same problem on these same servers . Once the lag starts, it doesn't stop until I leave and come back later.

The L.A. Servers at least have some major problem. At any given time a lot of people have 100+ ping on the scoreboard; and the chat box has periodic flurries of people complaining of lag all at the same time.

This has been happening for weeks now; my ping will be fine (around 60) for a while, then suddenly shoot up to 120+ and stay there, along with high packetloss. This happens on all West Coast Invasion servers except Prospero 7 (the one in Seattle). I know that it's not just me, plenty of people that I've talked to have this same problem on these same servers . Once the lag starts, it doesn't stop until I leave and come back later.

The L.A. Servers at least have some major problem. At any given time a lot of people have 100+ ping on the scoreboard; and the chat box has periodic flurries of people complaining of lag all at the same time.

West Coast invasion/frontline servers have been having huge ping spikes for weeks now. I was hoping the hotfix would address the issue, but no dice. 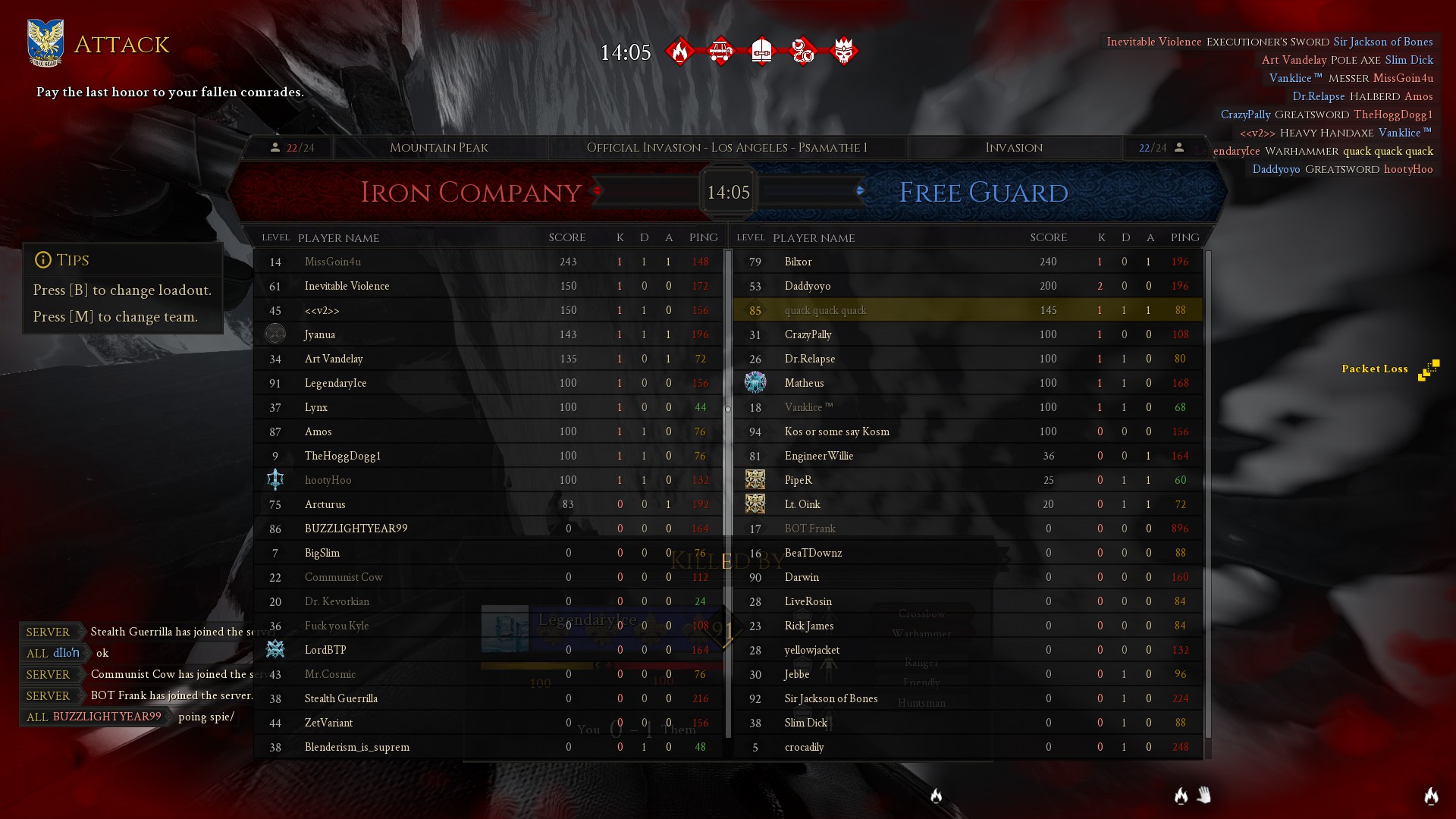 The game is absolutely unplayable during these massive lag spikes, and they happen anywhere from a few times a game to almost constantly. I've seen servers empty out due to this, no one wants a lag-fest.

West Coast invasion/frontline servers have been having huge ping spikes for weeks now. I was hoping the hotfix would address the issue, but no dice.

The game is absolutely unplayable during these massive lag spikes, and they happen anywhere from a few times a game to almost constantly. I've seen servers empty out due to this, no one wants a lag-fest.

Don't know if it's related, but West coast invasion/frontline servers have been having huge ping spikes for weeks:

The game is absolutely unplayable during these massive lag spikes, and they happen anywhere from a few times a game to almost constantly.

Shouldn't there be at least one or two more for the northwest region? The lone Seattle server (Prospero) is always full, whereas the Los Angeles servers are usually at least 1/2 empty. There is definitely a need for more Seattle/ Portland- based servers; the West Coast of the US is well over 1,000 miles long and having 95% of the servers near the southern end of it isn't great. I'm lucky to get under 70 ping from where I am near Seattle; and as soon as the server fills up it goes up to around 80.

Servers should be more centrally located. If they were in San Francisco for example, the entire West Coast could have good or at least decent connections. Or shut down the excess L.A. servers (which are always empty anyways) and open a few more Portland/ Seattle servers, same cost and better service.

As it stands, people in the NW can either spam "join" on the Seattle server in the hopes of nabbing a spot, or they can join an L.A. server which will have connection issues from being so far away.

After playing Invasion mode for a while; I can say that I love it. HOWEVER, map balance is a big issue. Clearly these maps didn't get balance tested with 48 players before they were released, at least not nearly enough. Here's a breakdown:

-Feitoria: The 1st two parts aren't too bad in my opinion, unless 3 annoying strategies are used:
1) Attackers invade the upper story of the siege tower en masse, and turtle up while somehow still pushing the tower from the top level.
2) On 2nd part, defenders put spikes at the tops of all ladders/ the siege tower, effectively sealing off all routes.
3) On the 2nd part, defenders retreat to the the back tower and build tons of walls/ spikes at the doors. With only a couple engineers defending, it's nearly impossible to break through, since even reaching the entrances to the tower is difficult for attackers.

Obviously these are problems, but the worst part is the last one. Attackers roll through 80% of the time, unless the defenders again employ the one working strategy of barricading a house. Only having one viable defensive strategy gets repetitive, not to mention said strategy being cheesy and annoying.

-Grad: Attackers tend to roll through the 1st part, due to there being too many/ too widely spaced things to defend. There are just too many paths the attackers can take so the defenders are always unfocused/ spread thin. The 2nd part is better, but has 2 major problems:
1) The warden/ commander barricade themselves behind engineer walls. When this happens, it's nearly impossible for attackers to break through. Noticing a theme here?
2) A single shot from the catapult can do huge damage to the commander, even through a wall. If he's inside defending, he has no way of knowing that it's coming/ avoiding it. The fact that a guy can click once from so far away and, without even really trying, win the game against a potentially much better team is not exactly great.

-Taiga: Attackers usually roll through the 1st part unless defenders are very very proactive, and attackers have lots of time. Defenders can hardly reach some of the peasants before they are killed, the rest are easily picked off since they are so close to the front. This whole objective just feels awkward, like they smooshed it in without really designing part of the level to make it work. Maybe if there were a couple side-areas with more peasants?
The 2nd part is better, although many people seem surprised to learn that there is a 2nd firepit that needs defending; as there doesn't seem to be any indication of where it is. Most teams completely focus on the firepit in the center of the fort, almost as if they weren't aware of another firepit existing...
The 3rd part is pretty balanced, unless (you guessed it) defenders wall up and no-one can get through. Also maybe the ballista being there is a bit OP
The final objective is a shit-show. If the attackers don't immediately blow through the tunnel, they are doomed. The tunnel is easily blocked for eternity by 1 or 2 guys with firepots/ ammo crate. Add a defending engineer to this mix, and attackers are at a huge disadvantage. Seriously, the firepots on this part are a huge detriment to smoothly flowing gameplay, it just turns into a game of red light/ green light. Also the large cave area is easily turned into a shooting gallery by defending ballista, adding another layer of difficulty for attackers.

-Camp: Camp is rarely chosen in the vote. From what I've seen though:
Attackers usually roll through the 1st part, although it's not as one-sided as some other 1st objectives. Bombing the seige towers is very difficult for attackers though, especially that last tower. I've only seen it come to the final objective 2 or 3 times (since this map is picked so rarely, and the 2nd obj so rarely passed), so I can't really say how the balance is for that part.

None of these maps are, on a whole, well balanced. There are some common problems:
1) 1st obj is too easy for attackers
2) A few walls/ spikes being constantly repaired completely stonewall the attackers (especially in Feitoria!)
3) One or two guys with firepots can completely block all vital chokepoints indefinitely (this is a problem on all maps). Maybe firepots should be limited to one per loadout? No-one likes being completely blocked from the fight by a naked guy hurling firepots and nothing else.
3) Awkwardly placed objectives being hard to defend
Hopefully the next patch addresses these issues; right now Invasion mode is a race to see who picks the right team 1st. If you pick the wrong team, or if your game loads slowly, you lose 80% of the time.

Same here, haven't played in weeks because of this. Everything was fine around patch 4 or 5, what the fluff happened?!

I like the combat system; it's insane fun. BUT:

I dislike the huge lag spikes introduced around patch 7 or 8 that prevent me from playing :(

Thanks for the update, it's good to know that server improvements are coming.

Same here (West Coast U.S.). I've pretty much stopped playing Mordhau because of this. Small wonder that the playerbase has shrunk so rapidly, it's sad to see a game with such potential wither away because of crap servers/ buggy netcode.

Just tried to play frontline (official west coast), and it was awful. More that 1/2 the players had 100+ ping, myself and plenty others were spiking up to 300-400+. Players teleporting left and right, with major pauses in gameplay. Only a few players had green ping (myself included, when it wasn't spiking to 300). What's up with these official servers, they're absolutely terrible!

Server quality is another issue. There's a topic right now on steam with nearly 50 posts about how laggy/ unstable the servers are, and no dev response. Not a good look for the game, I myself have stopped playing until the servers are fixed.

Having the same problem, no solution found yet. RIP my Mordhau experience I guess

This problem has been present for weeks now, and it is still not resolved. Wired ethernet connection, low stable ping in all other games, ping to google is fine with 0 packetloss.

The ping spikes start after about a minute of gameplay, and happen across ALL official and 3rd-party servers; and get much more frequent when the server is full.

Can't really play the game like this, today I played for 10 minutes and logged off in frustration. I've messaged like 7 of my Steam friends, and they're all having the same problem! Playerbase will soon be at less than 10k people, and this is a huge reason why. Mordhau is broken in its current condition for a lot of players, it's sad but it's the truth.

This problem went away for me but is back now with the patch; every single 48p official server I've joined (West Coast US) has this problem. The servers regularly suffer terrible lag spikes when the server fills up. I'm staying away from official servers until this is fixed, it makes the game super-frustrating.

There's no way around it, bad servers are the death of any online game, and boy are these servers bad.

Some more voice commands would be nice, especially "Behind you" and "watch out for archers"; there have been times when those would have been very useful to have.

Spawn areas should not be reachable by enemies and should be safe from firepots/ horses/ ballistae. Also the routes out of spawn should not be blockable by engineer construction/ firepots.

That's about how bad it was for me a couple days ago. What region was this server in? Also, how full was the server?