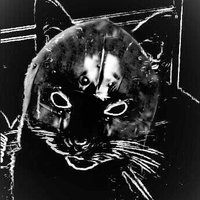 @Maxilatorn said:
I see some comments about historical accuracy, to put this endless back and forth to rest, In Mordhau we focus on bringing in armors from most parts of Europe spanning many different centuries, meaning that you will see armors that would never have faced each other in battle nor existed at the same time. We are not trying to make something that is historically accurate but many of our armors are based on things seen in the real world. As a rule of thumb, what belongs in our armor collection are armors that would appear grounded in reality to a layman.

Thanks. I will use this citation in further pointless YouTube arguments. 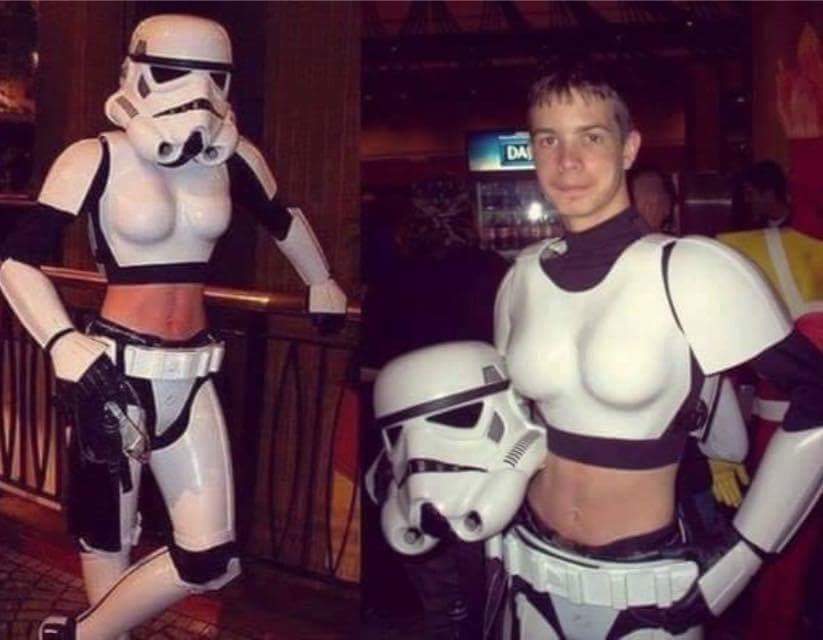 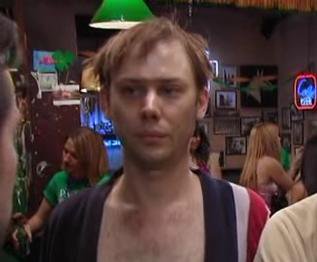 "Stamina is not something we'll just slap on everything to make it more interesting."

It is a way for the developers to steer the meta in a certain direction. For instance, to reward a certain amount of aggression to prevent shield-turtles slowing down the flow of combat. With this in mind, having sprinting consume stamina would be quite obnoxious and slow thing down too much.

Will close this thread now. I hope you find yourself a key.

We know there are a lot of people that would love to get a key, but can't because the webshop unfortunately had to shut down. Since then a few people have been selling their (excess) keys to those who want them.

The developers are completely fine with it but encourage you, if you want to engage in these transactions, to do so through these forums, as it is easier to gauge the validity of someone on these forums than a total stranger somewhere on the internet. It goes without saying, but trading keys is at your own risk. Be safe.

Also, if you wish to buy a key from someone, you don't have to create a new topic asking sellers to contact you. There have been quite a few thread doing this already, and we'd rather not have them flooding the forums. If someone is willing to sell keys, they can open a thread in which buyers may respond.

You should know that "being too lazy to use the search tool" is not a valid reason to ask questions that have been asked and answered many times before.

We will be allowed to record and upload alpha gameplay as much as we want.

Trevz is gonna walk away from this a goddamn millionaire.

@Faffywaffy said:
I know i'll get hate for this, but all of those helmets, despite looking cool, are just more off-the-wall representations of medieval/renaissance helmets. That last one is just begging for a lawsuit from Ubisoft. We could have gotten later styles or regional variations of the sallet, later forms of barbute, different styles of kettle helms, or the hounskull bascinets from the late 1300's.

Apart from that, I absolutely love the 15th-century style brigandine, it looks very faithful to historical designs, with the triple rivet pattern and the buckles on the torso. The billhooks look great, even though I have a feeling it will be very derivative from Chiv gameplay-wise, which i'm not too stoked about.

After this, I can expect the next update to add one handed flails and more representations of helmets based off 5 minute google searches and products sold on LARP stores.

I would be very glad to talk to the artists personally about the proper representation and design of these helmets, and some designs that aren't in the game. I know I've been a cunt on the forums, but I would really like to help the dev team with this.

If you're serious about wanting to help out, I strongly suggest contacting the developers trough their e-mail ([email protected]).

Bloody hope you're right about the flails, though.

Time to step up your game, Humble.

Those norse swords are triggering my Chivalry PTSD.

If you want people to recognize you, couldn't you just use the same name in both places?

Take this discussion to off-topic or duke it out over PM. No need to pollute a good thread.

Sorry to hear that.

I think Steam early access should only be considered for the beta for the reason you've stated. There're a lot of people that frown upon SEA because a lot of those games get stuck in development hell in there. But when people have seen videos of Mordhau in the alpha stage such a consensus can be avoided for Mordhau and bring in that extra cash when the beta is released on SEA.

@MrBlackDragon said:
I like this idea. When you are killed, there is a chance you enter a fatally injured animation(laying on the ground possibly screaming, gurgling blood etc.) While in this animation YOU ARE ALREADY DEAD. cue the respawn timer. You cannot move or perform any emotes whatsoever(maybe some exclusive audio emotes taunting or pleading to your enemy). The enemy(or an ally) can deal any amount of damage to you in any way possible to end that animation thus making you a ragdoll corpse as usual.
This will make for some interesting end-of-round entertainment. Executing a couple of bodies on the ground after a victory while spamming some witty emote is a great way to celebrate. 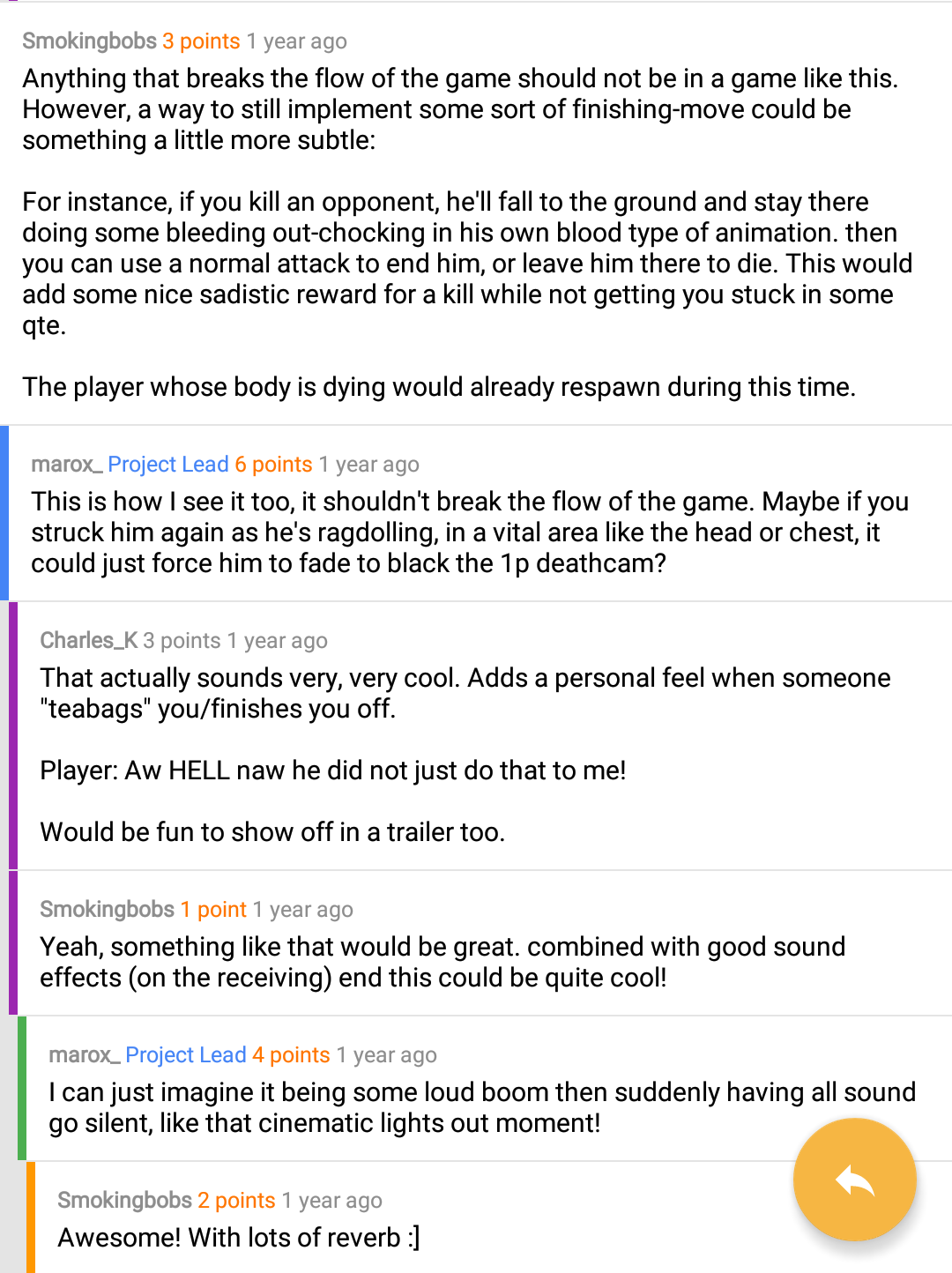 These kinds of "mechanics" would be way better if implemented through death animations. Longer animations that show someone bleeding out or something like that would allow the player to have the sense of execution the player he beat without anyone being locked in some obnoxious cripple-mode.

Probably very similar to how M&B did it.

EDIT: When matchmaking is implemented duels can be done using that. So the game would put players of similar skill level together in a game to duke it out; same goes for 2v2, 3v3 etc.

Looking forward to the gigantic pommels.

Even though you're talking about messers

Random Madness, the gore review guy, did an interview with Marox, which also included horse gore:

@crushed said:
Yes there is a seperate button to go unarmed (not fists)

What does the alternate mode button do when the fists are equipped?

You switch from fists to open hands and start slappin'.