Your example fails to recognize the lack of reverses in Mordhau. If that's why you don't like drags, you have nothing to fear. To go into drags a little deeper: dragging is not what ruined Chivalry, in fact it's what gave the play so much control. However, Chivalry's "advanced" moves are often all thrown together and called "drags", even though many are not.

Dragging in and of itself is simply the ability to move your mouse, and thus your weapon's swing trajectory during an attack, instead of being locked out of control. This is exactly what makes the combat in games like Chivalry and Mordhau. However, the animations in Chivalry allowed for some extreme feats, like stopping weapons mid-air, as the time the weapon release animations took made it possible to do so. Mordhau's release animations are generally quite a bit faster and move in a straighter line, unlike Chivalry's.

I'm not sure how one could even "take drags all out together". It's what the game is build upon.

@Runagate said:
@Smokingbobs Damn you've had to move like 5 threads in the last few hours

And three at once; hence the hattrick. Imagine when the alpha hits :]

Project Slasher was what Mordhau was called on the Unity engine, and it was pretty much just a prototype. Development of that project was started by Marox - Elwebarro and the others joined shortly after. They are/were never TBS employees and TBS never worked on Slasher, let alone started it.

The only thing TBS has to do with Slasher is that TBS's decisions alienated some of their players to the point they started to make their own, better game.

They ran a similar Kickstarter? What? What does he mean by this. How much can Kickstarter projects differ from one another especially if they are for games in the same genre. Also, even if the campaign was 100% identical, it doesn't say anything about the product it is promoting.

EDIT: I don't think Reithur's layoff is a matter of public record. If it is not, it's pointless to fill in the blanks with hypotheses and draw conclusions form that.

Welcome to the forums.

Mordhau aims to avoid mechanics that involve buttons doing something for you that you could also do with regular movement. Now, your suggestion isn't the most extreme one-button-dodge I've seen, and it's not as ridiculous as those, but it does boil down to the same thing, even though you would add a timing aspect to it.

The beauty of Mordhau's dodge "mechanics" is that they're not mechanics at all, but regular movement executed in such a way that you can avoid attacks. This emphasizes the amount of control you have over your character and, in my mind, is one of these self-expressing things you can do to define yourself on the battlefield.

I feel like your suggestion would put a dent in both of these things.

Enjoying the Discord changes I see :)

How are we supposed to believe you didn't just ditch them to devote your life to Mordhau? Just between us, I completely understand.

Welcome to your new home, Wiebusje. See you in the alpha ;]

From what I know by lurking at their website and subreddit, whenever people were talking shit about Torn Banner, they almost always mentioned Reithur as the only guy they somewhat respected. Sad to see someone like that go, as now TB will likely get hit by the full salt tsunami of their community.

See you in Mordhau, Reithur.

I'm not sure you understand Mordhau's combat system thoroughly enough to make these claims. What gives Mordhau the skill ceiling it has is the balance between these mechanics, and the ways they counter one another.

EDIT: Also, take into consideration that reviving an old thread like this could confuse a lot of users that have joined since then. Your concern doesn't seem to be about a dodging mechanic in particular, but the existing mechanics not being enough to grant a balanced competitive experience. Creating a new thread to constructively voice your concerns might be a better thing to do in the future. 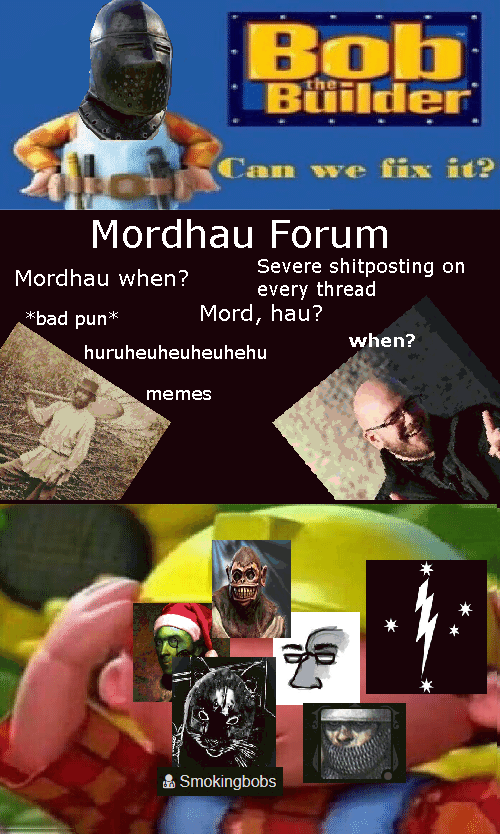 How about you jump out of your role as edgelord and put these topics where they belong.

Take your argument somewhere else SVP.

EDIT: Talking about potential delay is fine, obviously, but if it turns into a back and forth of insults there's no reason for it to be here.

Hell yeah I want to test

I've met him ingame a few times. Seeing "gold teeth in mordhau" as one of his aliases makes this even more bitter. I wish you, your family and friends the best.

This turned into quite the thread. The fact that people are starting to simply insult one another tells me there's no more room for discussion. The arguments have been stated multiple times - for both sides - and all that we can do now is wait for the Alpha to see for ourselves.

Don't get me wrong; I'd love to see everyone using first person, and do so myself exclusively. What I'm asking of you is to try not to radicalise in the idea that everything third person is inherently a big evil. We should use alpha testing for what the name implies and draw our conclusions from that. As far as I know, third person in Mordhau is just that; an experimental feature.

@Sammy said:
Adding third person is the worst thing they've done. It's a move which was made to appeal only to more casual players, while also adding in a view which was exploitable in Chivalry, which no one is excited for.

You're right that they added it to appeal to a larger audience, which on its own is completely fine. We don't yet know if it's "exploitable" in Mordhau, though. All we have to go on is the statements from the devs, who've said it isn't. I'd advice to withhold judgment until we get to mess around with it. If it proves to be exploitable, there's always to option to disable it.

On another note, I never found third person players in Chivalry to be any more of a problem to deal with than those in first person. The only thing they were better at was using spins/reverses more easily. Since those moves are invalid by default in Mordhau, I can't bring myself to dislike the decision to allow for third person. The peaking around corners thing never bothered me either, as it is quite easily to punish those who think they're the one laying the ambush.

Then again, best to wait for it to release. If it's as shit as you expect it to be, we will tell them.

@Jax said:
What about massive shitposters get banned from every topic except a dedicated shiposting thread that's hidden to the normal users. Mordhau Drunk Tank lol

(I'm not being serious btw)

You mean a private message thread where you don't invite any moderators/devs?