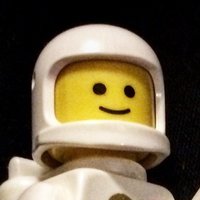 the best 3/3/3 loadouts should be 0% fat, 50% skinny and between 50-75% strong
and speaking of emaciated knights, here's john de argentine whom i made as an excuse to use brigandine legs in a historical manner 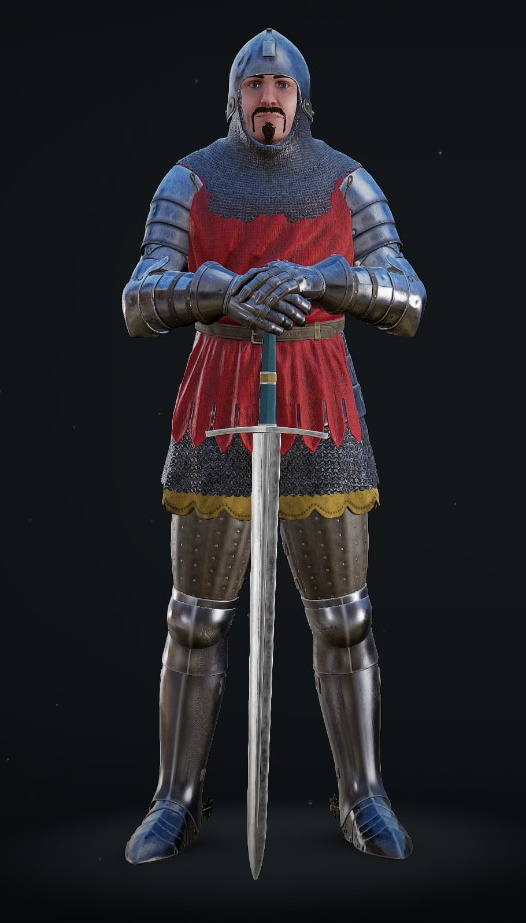 pigface and hounskull are the same thing

transitional period mid-14th century german knights, based on multiple german tomb effigies, two of which are below 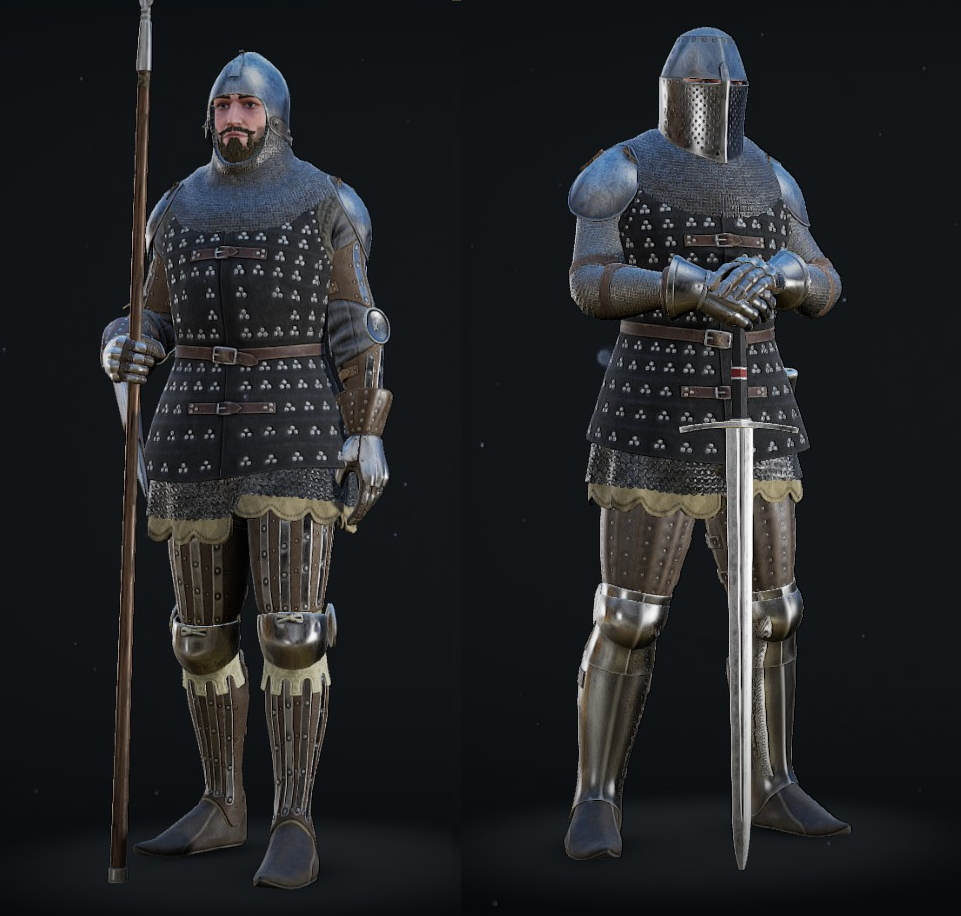 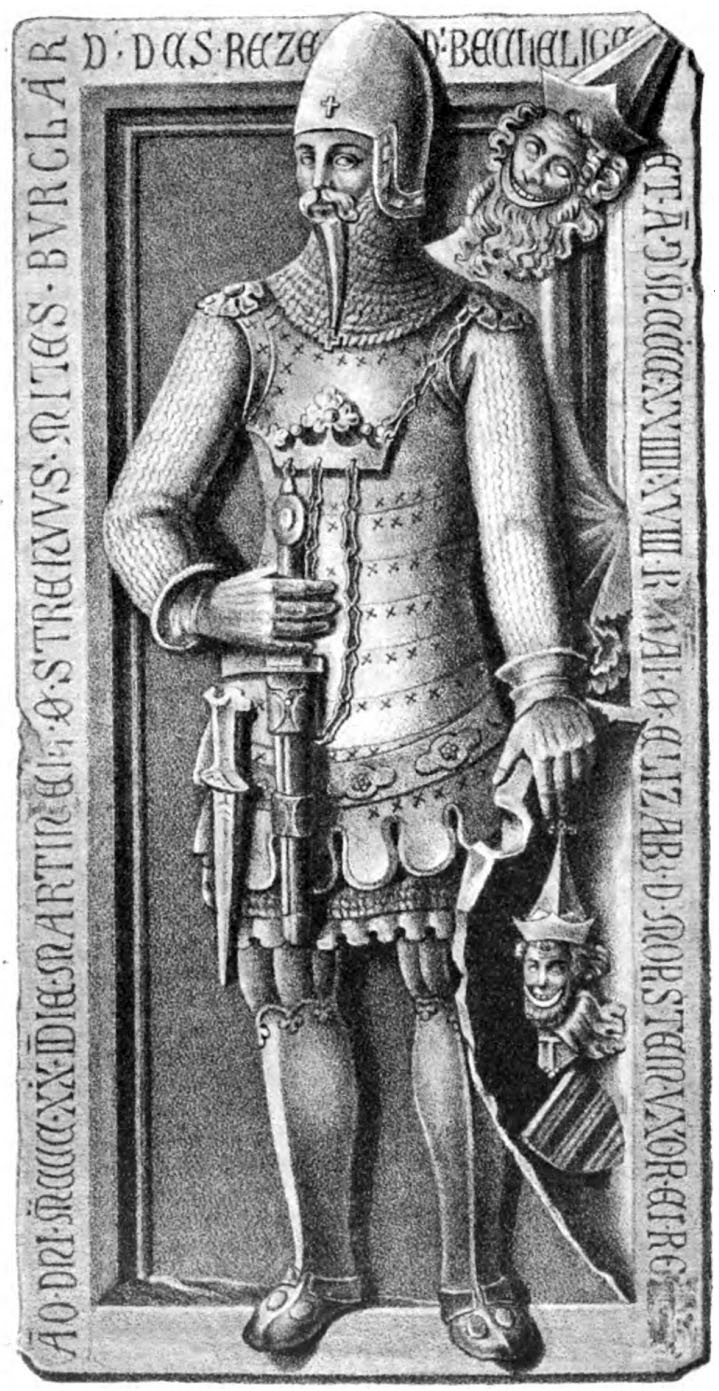 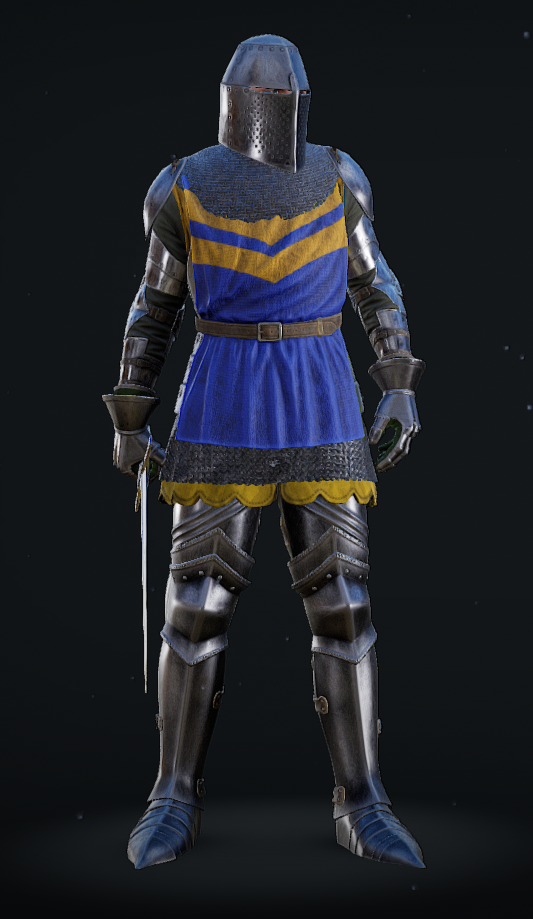 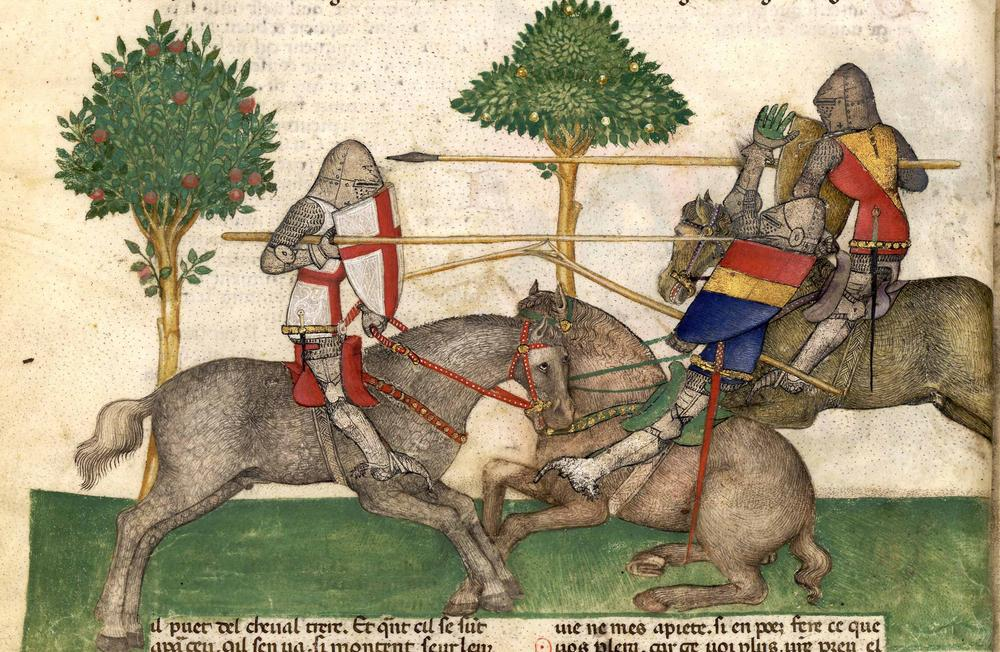 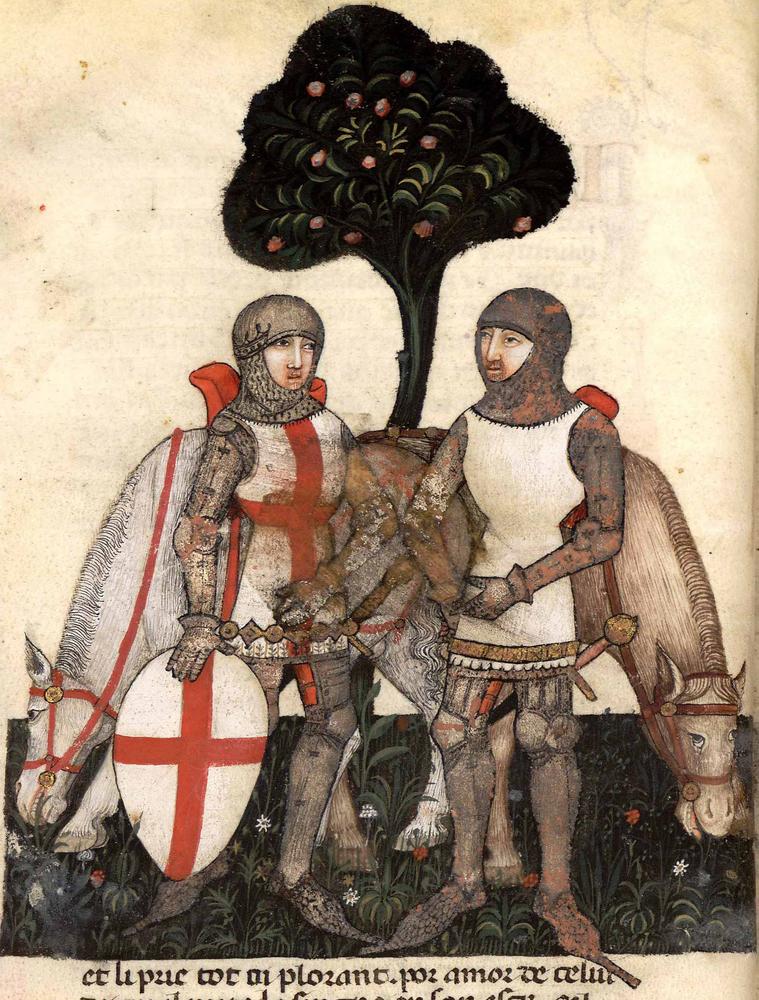 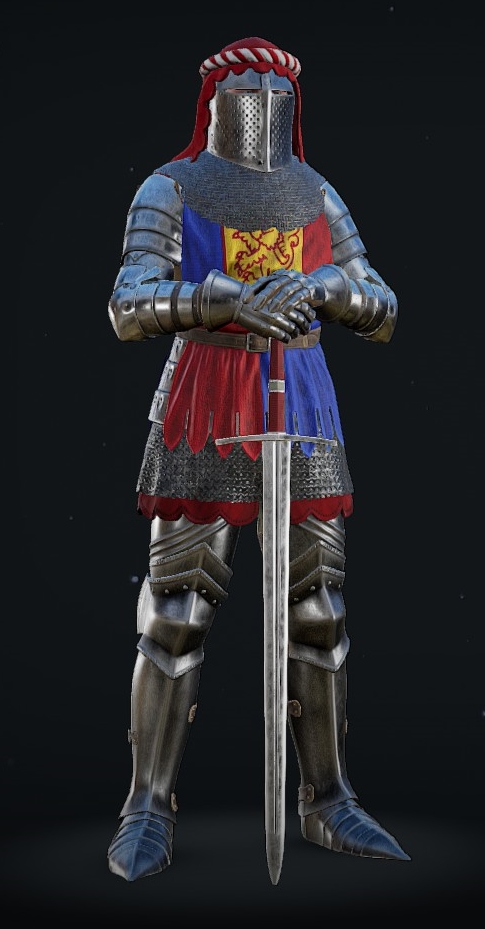 i have an old screenshot of it 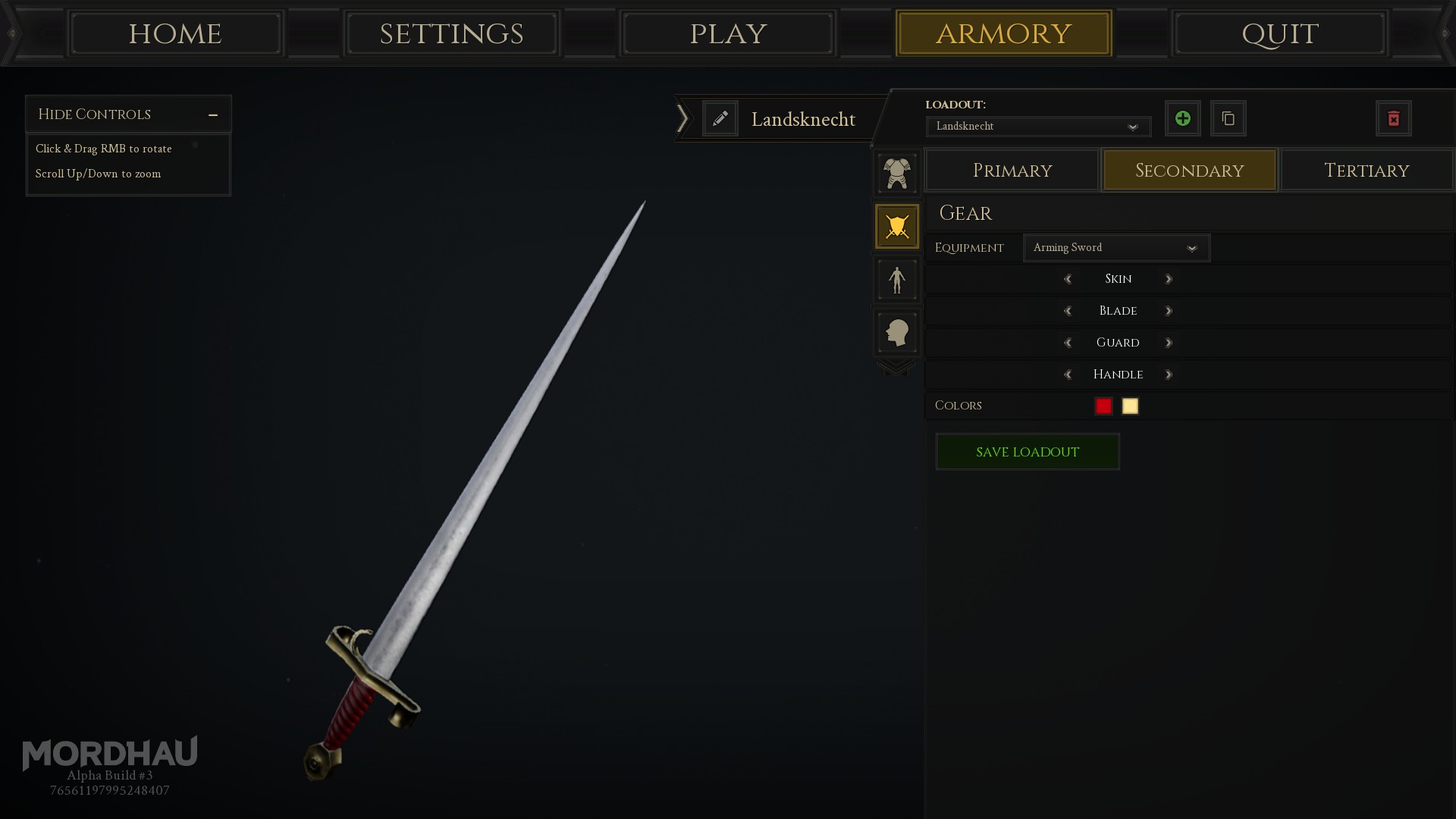 i dont think this is based on an average katzbalger guard, its not nearly curly enough

not that im advocating for frogmouths, but there are some depictions of frogmouth-like helmets being worn on foot in the early 15th century, both with breath holes and without, with a movable visor and without 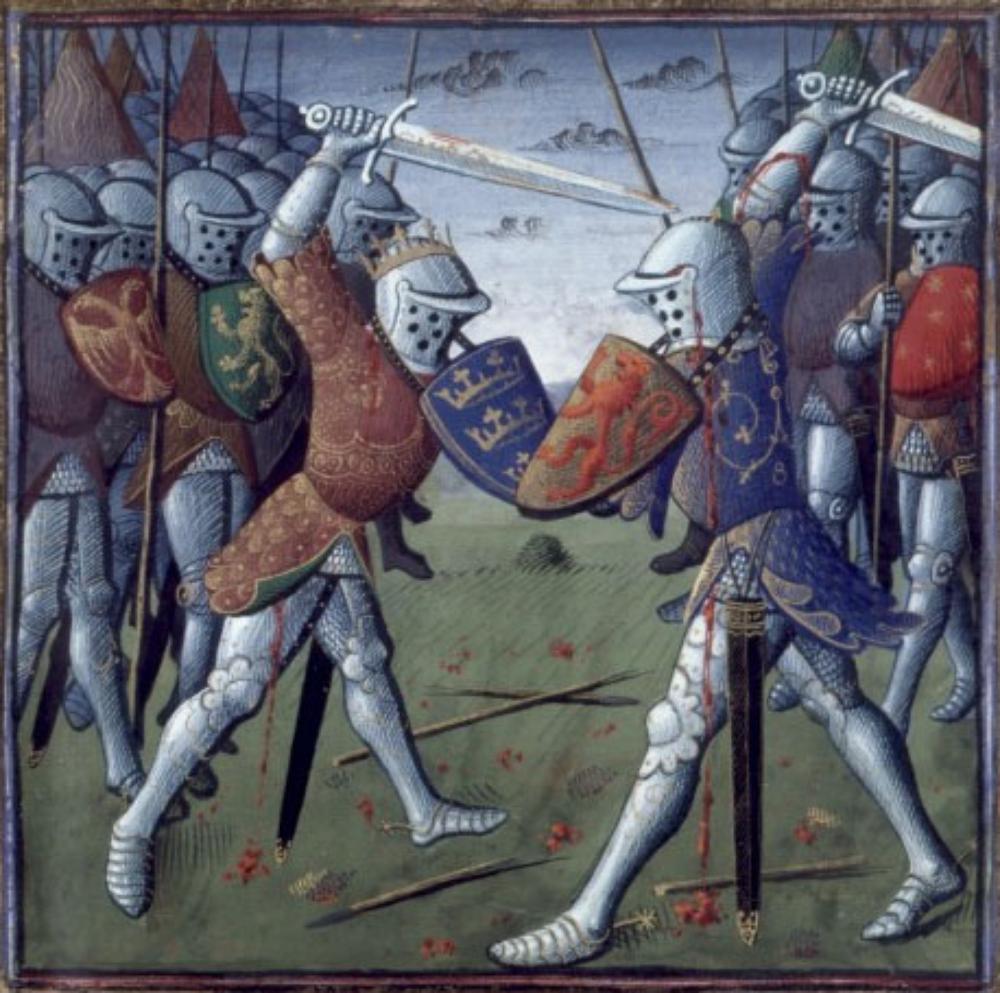 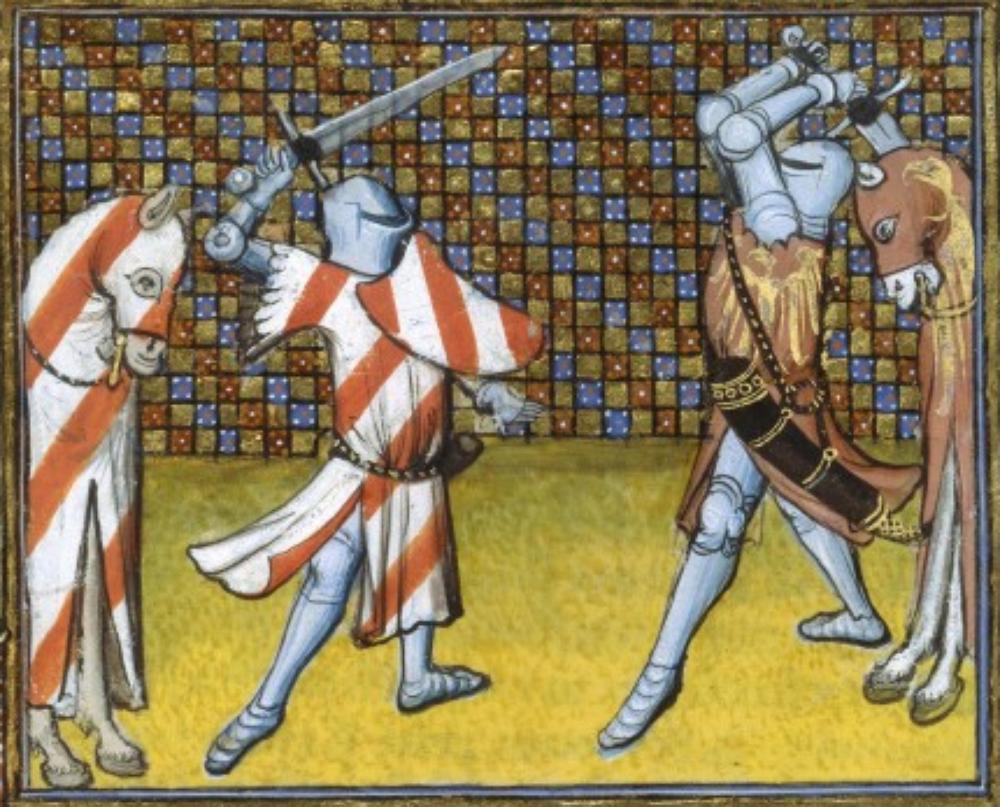 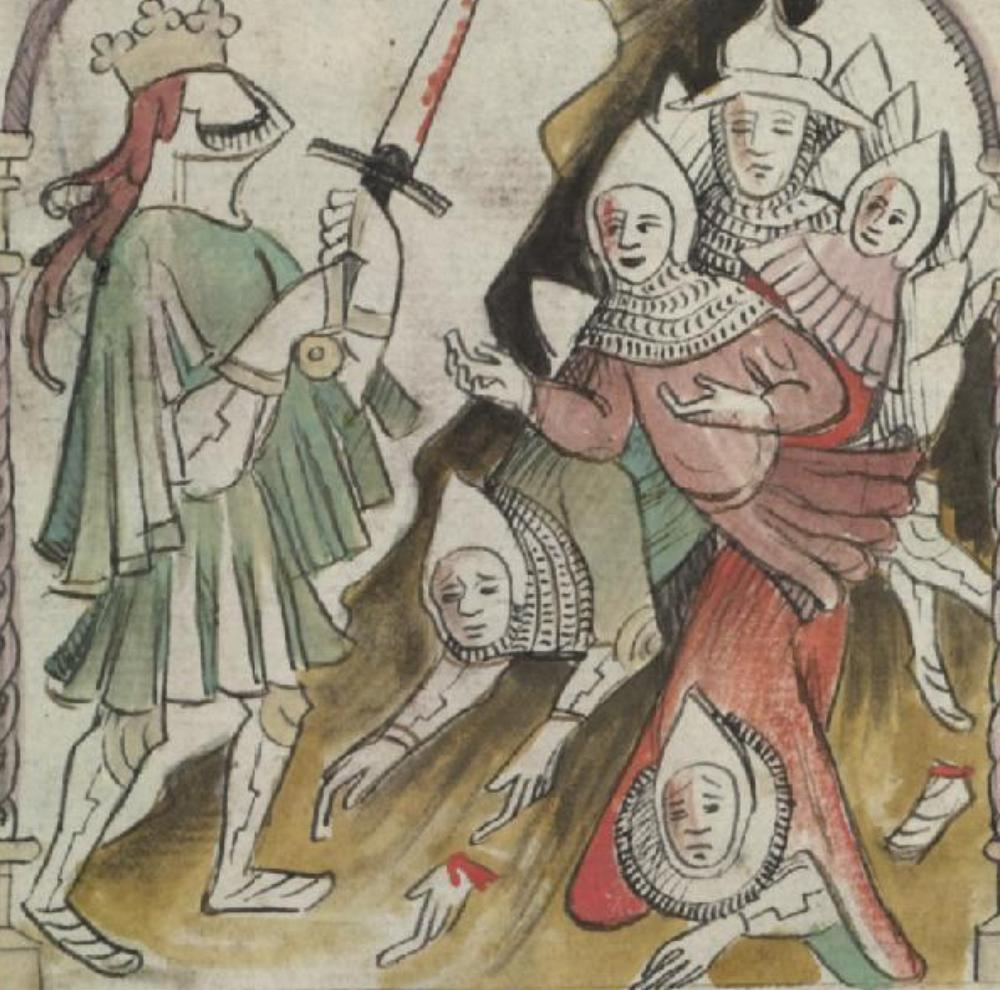 these could a type of bascinet or armet visor that resembles a frogmouth, or an actual stereotypical stechhelm (maybe not so likely since being able to raise your visor is very valuable if not necessary in a field combat scenario) 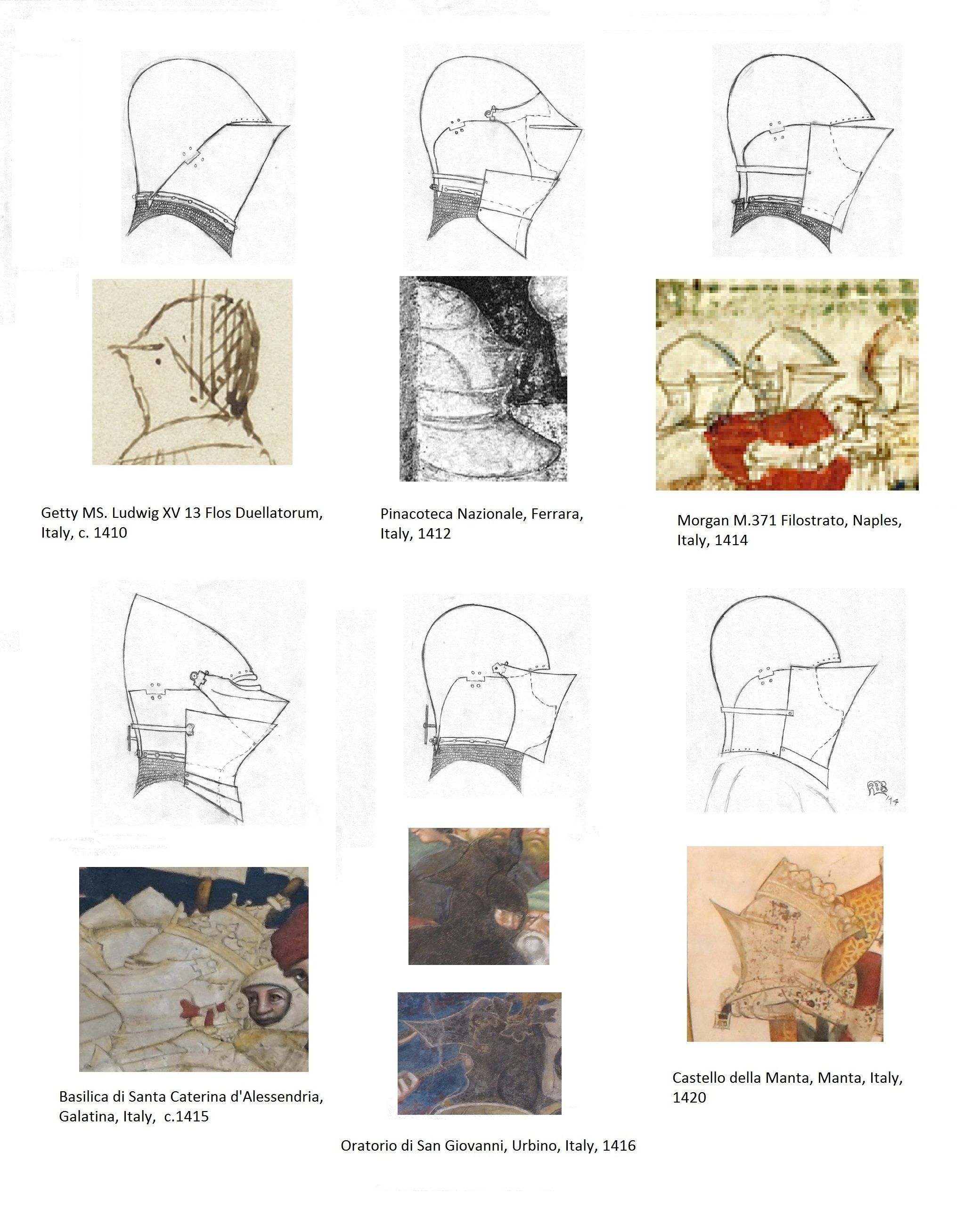 what i see as the main difference between jousting frogmouths and these supposed field frogmouths is that the former variants tend to (but not always) require the wearer to lean forward to be able to see out the visor, while these artistic depictions have their oculars lined up with the wearer's eyes to be viable on foot
so while the heavy frogmouth helmets of the late 15th and 16th century are optimized solely for the tournament, there are at least some manuscript images that show frogmouth-like helmets being worn on foot. i wont say for certain whether these helmets existed in abundance, but there are a sizable amount of manuscripts that show them being worn outside of the joust; maybe just for heraldic and knightly show-off purposes? some of the depictions revolve around the tales of the knights of the round table, but not all of them

You must be the most annoying person on this forum. Literally everything you post is either useless to the discussion or just disruptive.

i would also advocate for a spike addition to the warhammer, but that would mean throwing away the possibility of a dolchstreithammer skin 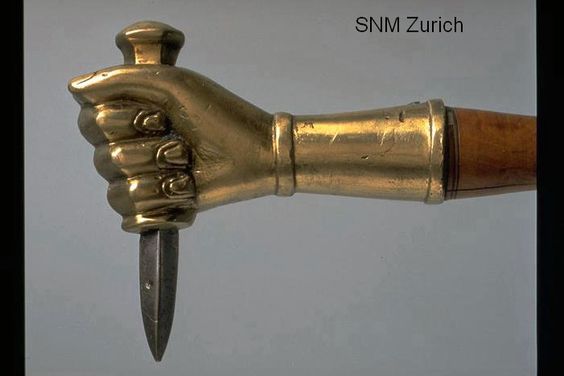 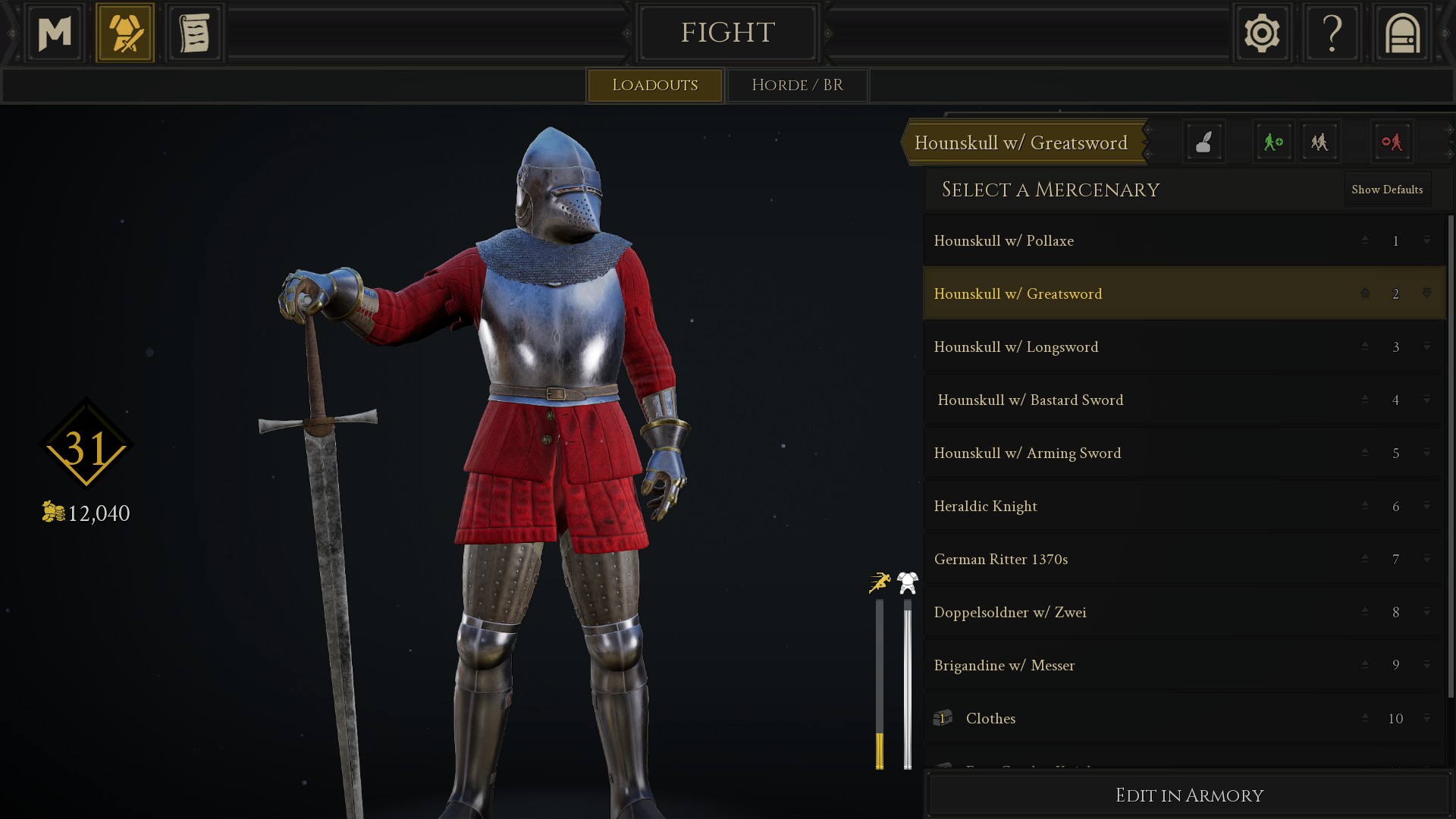 @Ikarus said:
Everyone must have realized that the archery system is broken, very slow and out of the reality. I suggest watching this video, which shows historical facts of how it was more dynamic and fast.

Obviously the archer is extremely skilled, but suggests it would be a common skill in medieval times.

lars andersen should not be taken seriously when it comes to history, he is a good circus act but he is wrong about how archery was done in the middle ages, both misinterpreting historical sources as well as neglecting to mention certain things. what he says about archers in the past not standing still is pure horseshit
also he uses a low poundage bow, not the kind of thing suitable for a medieval battlefield; if he used a bow with a heavier draw weight that was appropriate to bring into war, he would have a much harder time pulling these tricks off so quickly
here's just one video debating some of the things he says https://www.youtube.com/watch?v=f2fugtMuGMI

@Gterry180 said:
What the packet of sugar is a Knigga?

a combination of knight and nigga 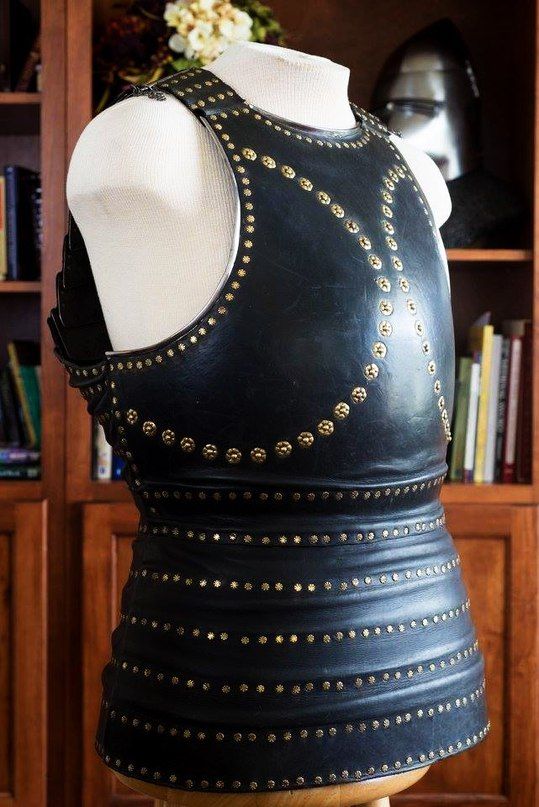 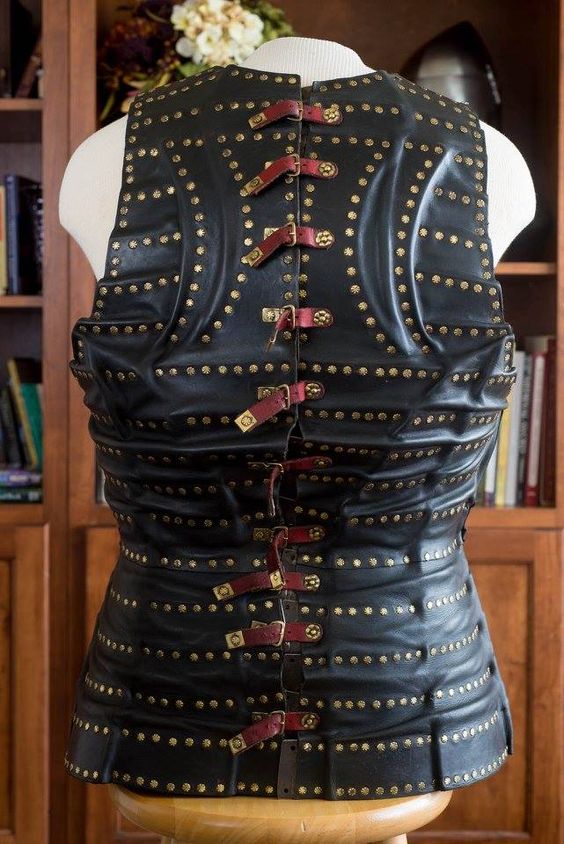 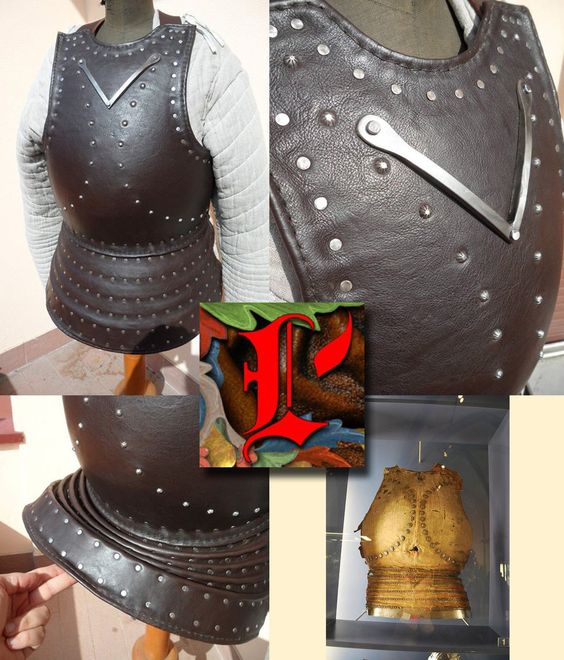 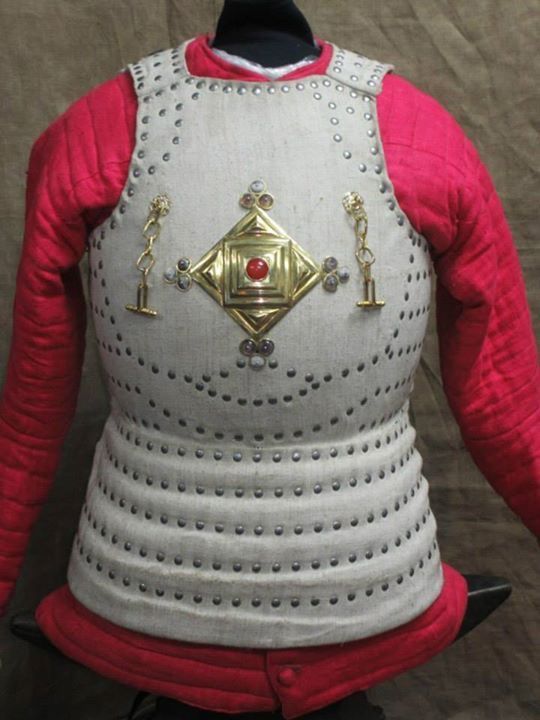 grator, the main weapon artist, has said that a katzbalger skin for the arming sword would be inappropriate because the arming sword is suited for thrusting and most of its blades taper to a thin point to show it, while katzbalger blades tend to have much rounder points
there might be something else coming up though

@CoiNs said:
Heavy armor is too strong against arrows

and thats the way it should be 💪

doppelsöldner from around the 1520s 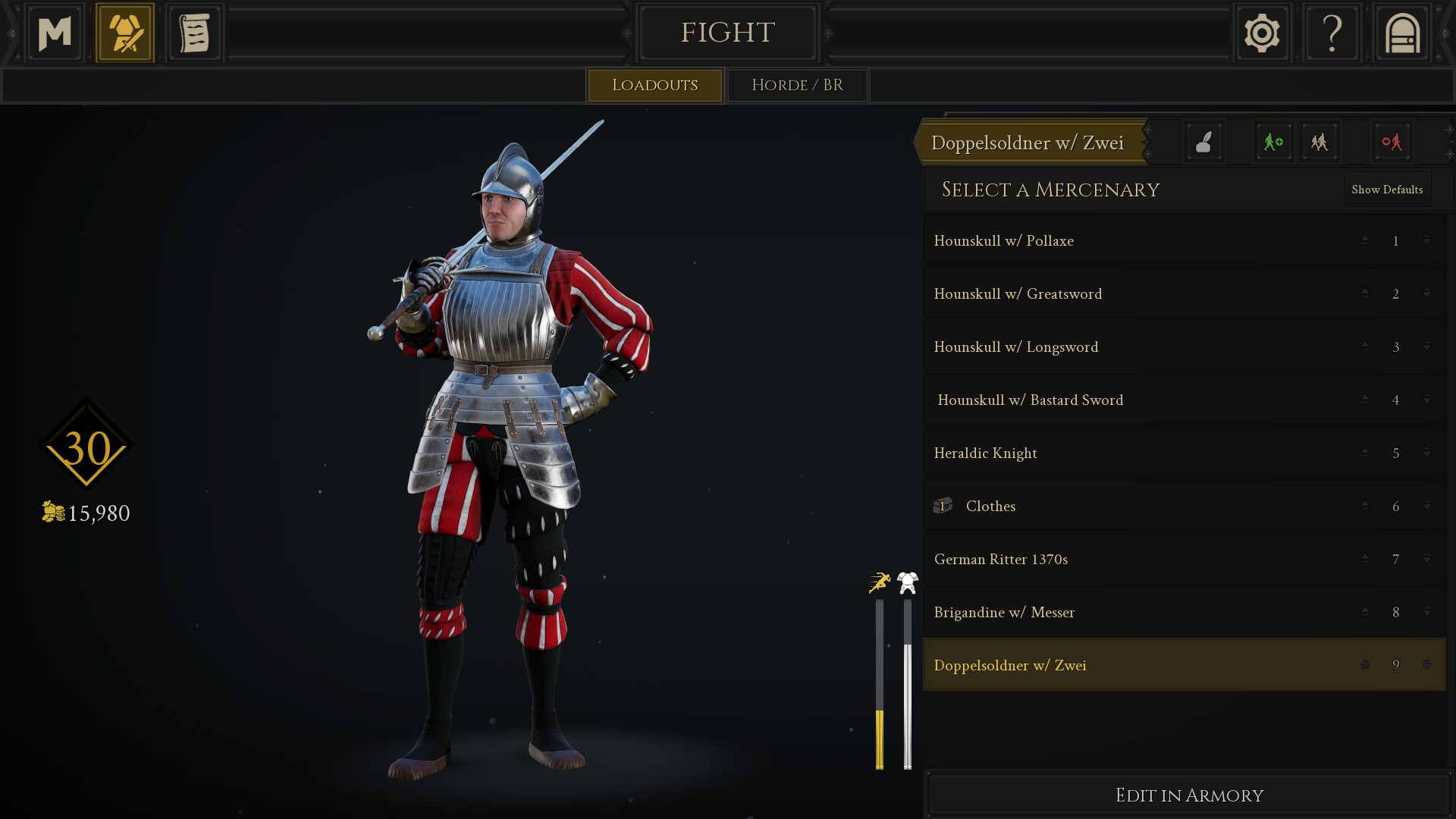 here's the list of things that i really think mordhau could use in order to complete some of the armor sets as well as bring more life into customization, now with pictures: