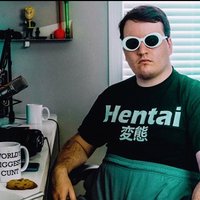 @Rergato said:
I mentioned this earlier, but they should add on to the “Wrecker” perk, by giving users a much stronger stamina drain against someone blocking with a shield.

Or, make it so a hit from a Wrecker will flinch the shield arm, disabling the block for a second.

Slap on a visual/audio representation of getting hit (on the shield) by a Wrecker, too— so players aren’t going “how the fuck”. Just a different particle effect and sound would do.

That all sounds nice in theory but I feel having perks effect natural combat mechanics in the game makes it too "mmo'y" I am aware that bloodlust, dodge, and some other perks do effect situations but they don't change the melee mechanics parry/block/chamber/etc

I would like to say your suggestion leans more towards effects types of weapons may have like the maul, making it known to all with a shield the maul can break shield holds briefly or something along thos lines. This thought of course does not resolve the shield problem in general, which I think should just have a general rules such as higher stam drains or mechanics added to shields to make them more unique. Just my opinion of course

@Pred said:
Check this though:

Why do we need to clutter the game with such cheese mechanics? Really.

In Chiv AT LEAST you immediately knew who can dodge and who can't.

I tried to tell the OP that dodge is probably the best perk you can get but apparently in his words turning 180 degrees and running away works better (he obviously doesn't know what hes talking about) and I even agree with you a little on it cluttering up the mechanics if it were not for the stamina drain to balance it out. 10 stam per dodge you know if you stay on your dodging opponent its beatable; I personally never used and hated the Men-At-Arms class in chiv and delt with this crap alot. Although I am not entirely against this perk.... yet.

Increased stamina drains are important distinction for shield users, in our case here they do not effect the shield users as you would expect.

I love mastering different weapons and combinations even perks; sadly I have zero interest in using a shield as it does not feel exclusive in its design. I do not feel more skillful or that I have mastered something unique, its really feels too simple.

Currently there is no real downside to having a shield, but more then just bringing it to a more balanced place I'd rather see it more diversified, shield moves bashes something to give it a unique feel, rather then just being a cop-out for parry mechanics.

@HABITUALOFFENDER said:
^This, the stamina regeneration is far to simple for shields and is to easy to manage.

For example, you hit a shield and it knocks him back slightly, he was already backpedaling now he can drop his shield and regen even 12-30 stam as you have to push upto him hoping to stop his regen usually using sprint to do so and now you are behind on the stamina game not to mention every hit your trading blows with him as his weapon is usually faster, its not as easy as just smashing on his shield. Coupled with the fact that using the shield doesn't really drain stamina much faster then timing your no shield parrys. (I tested the heater and it was 1 extra stamina then my 2hander to parry/block)

On a side note the kick buff was much welcomed.

Stamina doesn't regenerate that quickly. Also 2h often deal more stamina damage. So only checking the the drain negation is missing half of the picture.

I'm not going to argue with you that stamina does regen that fast, I will just show you.

In this clip that I recorded 2 mins ago you can see the polearm swing and miss once and in that time I regened 17 stamina with the Kite Shield.

@TheLastPaladin said:
So the ACTUAL logistical problems with a shield in the Mass Combat stuff here in Mordhau is that a group of shields can absolutely rock everyone's shit

a shield user is alongside a group of foes, it's significantly harder to just kill them.

And herein lies the rub. Its not that people are too dumb to kill shield's at all, its that the frontline game centers around staying alive inside of points the longest, at which point this basically becomes a very bad joke when a game turns into "those who have the most smart shields turtling caps win". I think we both want the game to be kindasorta balanced towards any choice being viable, without the game forcing a playstyle down your throat. So if there's class that can by virtue of its nature outlast and outcap objectives, it could lead to "either also flood shields or lose", which in turn would then also mean forcing loadouts and ruining this very freedom of choice.
This is what bugs me the most about shields, personally.

To be fair: Lately teams have coordinated a lot better killing shields as long as they are lower in numbers.
But I've also not yet seen a more extreme shieldcount organize yet. And if you have the bad luck of predominantly lower rank server players, 2-3 shields can basically decide most maps.

As a shield user; JUST KEEP ATTACKING US, our stamina drains so fast it's not even funny, just KEEP PUSHING and eventually they lose the shield.

Welllllll. I spectated some shield users. The second you stop blocking your stamina shoots up faster than the blood sugar of Police Chief Wiggum in a donut shop, so I've literally watched a near endless stream of blocking, which, when briefly interrupted by 2 seconds of pause, the guy basically had all of his stamina back. Stamina management seems painfully easy if you know what you are doing, and you can twoshot people with ripostes in between things as well.

As you've written yourself: near invincible, with near instant stamina regain and hard to kill. Add cap zone, cue frustration vs non-shield users in terms of choice and balance.
Dunno, I feel fairly justified to dislike shield users making matches a headache if there isn't a lot of high-levels coordinating against it - which is the exception rather than the rule so far.
Could still use a better solution at the moment if you ask me (adjustables: stam recovery, shield re-blocking window, maybe not free ripostes forever).

^This, the stamina regeneration is far to simple for shields and is to easy to manage.

For example, you hit a shield and it knocks him back slightly, he was already backpedaling now he can drop his shield and regen even 12-30 stam as you have to push upto him hoping to stop his regen usually using sprint to do so and now you are behind on the stamina game not to mention every hit your trading blows with him as his weapon is usually faster, its not as easy as just smashing on his shield. Coupled with the fact that using the shield doesn't really drain stamina much faster then timing your no shield parrys. (I tested the heater and it was 1 extra stamina then my 2hander to parry/block)

On a side note the kick buff was much welcomed.

Its simply not the same mechanic, you cant sprint backwards or side to side while facing your enemy as you can with dodge. You may be hugging to close to use it? if you dodge and the person is running at you and just hits you; well that means you dodged to early. Its generally for out ranging a single attack and usually when that attack is already in progress.

I personally find it to be one of the best perks in game.

I really feel like the OP is out of touch with the community who wanted this game and where they come from; heres why I say this.

I played chivalry in its early access stages and became very good at it, I have 1k hours in chivalry and I have not played it in 5 years. Even though I was very skilled at an early time in the games creation I still completely dropped the game and all the invested time once I understood the developers had no intention of pushing the competitiveness the game naturally demands along with no new content. (also when they made deadliest warrior game version, yuck)

I sorely missed that game and when Mordhau's kickstarter was announced I hopped on that faster then a white knight hits subscribe to a webcam of cleavage on Twitch.

I am sure alot of us who have been waiting for a developer to grab hold of this genre and do it justice would agree that one of the driving forces for the game and most any game is a competitive value that can also provide you with a feeling of accomplishment and exclusivity.

I can't wait to see the systems that bring the game into a competitive realm, I should hope that most people who enjoy a game such as this feel the same way.

My loins are tingling