It's official, horde mode is over, we're never getting it back. They took it away from us, we can't have fun anymore.

The only fun part of mordhau.
Gone.

Few problems with this

servers are currently being vaporized by a black hole

You start in a prison cell with nothing because you've been a bad boy.

You then have to make your way through the dungeon, piecing together your equipment as you go.

Naturally, the first bunch of enemies you fight are lightly equipped drunkards, why would they need anyone else to watch over your worthless incompetent ass.

And since you're not fighting 600 AI at once, each individual fight can be with a far more competent bot, that can youknow. Parry.
So you're having a fight with this angery bot in a dark torchlit dungeon.

However, as you go through this dungeon, you notice.
You can only go down.

And maybe you can take a friend with you. Just be careful not to get separated. Who knows when you'll find each other again.

EZ change, when the bot count goes down low enough to show their location with icons,
they now sprint to chase you.

I mean, considering he has the power to easily 1 shot you, kinda feel like it'd be nice to have him have more visual uniqueness, also for the grim reaper meme.

Shield boys aren't even that hard

@Lumi said:
I need a town full of peasants to kill with a sling. That is all.

That is included in the mode.

Peasants would be a sub objective within the bases.
As would freeing slaves.
Killing royal family
burning buildings
burning other stuff
breaking stuff
etc

Different maps, different themes, different sub objectives and methods of entry into the base.

@Naleaus said:
The capture zone are then pointless because they do nothing. Especially if you have a bunch of them. The map and playercount isn't big enough for that, and the fighting will always centralize where the important stuff is. So you'd have fighting at both bases cause that's the only place anything happens, and maybe you'd collect a point for respawning along the way. Otherwise the entire middle of the map is just a waste.

Oh the capture zones still drain tickets.
And actually doing all the objectives is difficult when you have to spawn at your base and run across the entire map through all the cavalry, archers, ballistae, attacky bois moving towards your base, and TDM Bois in the midfield.

The midfield and relevant capture zones are a highly important platform from which you launch your attacks on the enemy base.

You may not need to have a capture zone connected to the enemy base to actually do the objectives there, but to capture a zone, it still needs to be connected to YOUR base.

It's a mix of mechanics that work together to provide a coherent experience.

You also seem to underestimate the number 64.

Reminder that certain capture zones can't be captured because they need to be linked.
So lets say there's 3 active zones.
18 players used on zones.
46 left for objectives.

Lets say we have 4 players of cavalry
32 left

Lets say some mix of 20 players defending and attacking the objectives.
8 left

@Naleaus said:
Wait, so capture points with side objectives? That most everyone including people you act like a condescending shit to already agrees would be good to have?

Time and time again
Good game design has been proven to be objective.

But for the general populace, no, good game design is absolutely objective.

Frontline is an objectively bad mode that tries to rely on a combat system that is catered more towards the experienced player.

Is it possible for a game's gameplay to be so good that it beats out a bad/boring mode? Sometimes, but more often than not, the bad/boring mode is just a platform for the gameplay of the game. You'll notice, games that do this, are exclusively shooters. Arma, Battlefield, or any arcade shooter really.

Having a game mode where you stand in a circle "doing nothing" is ok in a shooter. Because you're always actively doing something, you're actively taking cover and shooting at enemies from some distance away.
The game is always afoot.

Having a game mode where you stand in a circle and stare at a bunch of enemies and wait for them to get closer to you while LITERALLY doing nothing is BAD game design.

"Modes like Team Deathmatch are literally just combat though and people love them"
In arcade shooters, yes. However look at the health of the playerbase of mordhau, all we had was Team deathmatch, deathmatch, and skirmish, and a very low percentage of the people who actually had access to the game actually played it regularly. Literally just waiting for the next update to see the changes and then stop playing again.

No one in the general populace cares how "complex" or "skill based" your combat system is.
They care about how good the "game" of the game is.

And that can be summed up quite simply

Compared to Team Objective, Frontline as we know it is already on the way out, and it will take the general populace of mordhau with it after launch. 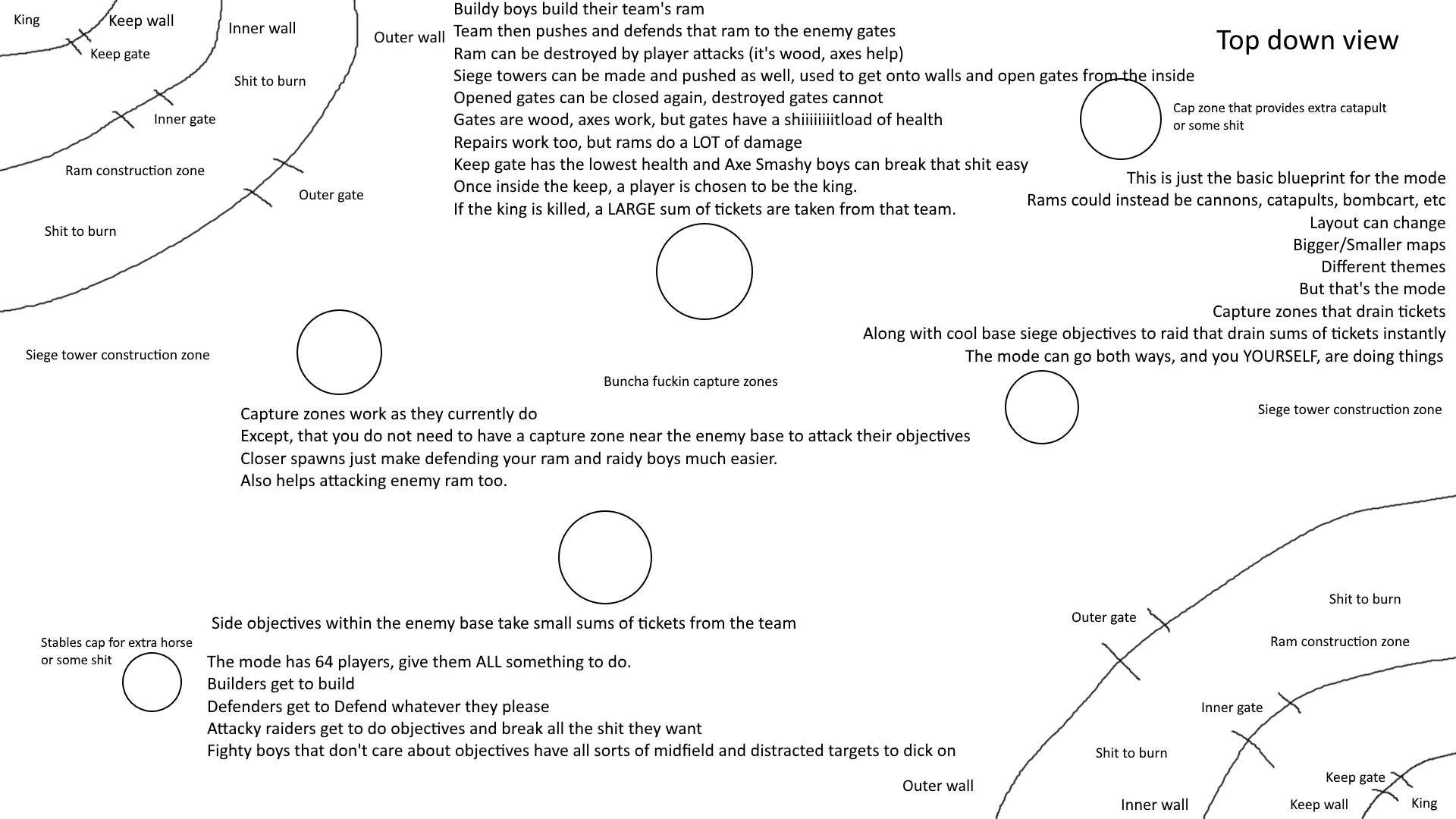 This mode provides the feeling of a large scale battle
Because it is one.

Chivalry's Team Objective had just as much running. If not more.

The thing is, you actually fucking DID SHIT when you got to your destination.

There's a mixture you need to find with your game, how much running you have compared to how much shit you actually do and accomplish.

Team Objective was fairly well balanced with this.

In Frontline however, you spend a shitload of time running, while doing and accomplishing NOTHING.

The problem isn't the running.

The problem is that you don't get to fucking do anything.

You move your spawn closer to the end objective

Why do you HAVE to. It's an OPEN FIELD. Just run over and blow up their towers, it's not even that far away.

If you actually looked at the map, you'd notice you aren't moving your spawn much closer most of the time. As the majority of the movement is laterally across the map, instead of towards the enemy base.

You push the enemy back and move forward.

The cavalry spawnkilling my team, and the teammates sitting in the back trying to farm ballista kills or some shit, would argue otherwise.

No, you didn't do shit. You stood in a circle.

In the context of the battle, you did nothing.

Ah yes, assuming you actually think about what you're talking about.
We can remove all instances of fighting players to simplify, as that's just a part of the game

Stand next to a cart

Doing so accomplishes something within the map. You are DOING something.

Doing so is an objective that progresses the map. You are DOING something.

Doing so accomplishes something within the map. You are DOING something.

Stand next to a ram

Doing so is the objective and accomplishes something. You are DOING something.

Stand next to a tower

Doing so is the objective and accomplishes something. You are DOING something.

Yes breaking down a gate accomplishes something, surprise surprise. You are DOING something.

Yeah that's how you burn down farms, you accomplish something here too. You are DOING something.

Run a lot on a boring map because combat wasn't centralized

Wait you actually think Citadel was boring? Wow.
Nah Citadel was one of the most exciting maps, it was just poorly balanced.

So if you changed the cap point to pressing E to raise a flag, or standing there till the trebs shoot, it's more fun? It's just flavor, but doesn't really add much besides distracting you from the wave of enemies on the way.

And what would raising this flag accomplish within the map? N O T H I N G.

What does standing in the circle actually accomplish within the map itself. N O T H I N G.

You see, you're LITERALLY missing the E N T I R E point.
What are you DOING while waiting for the wave of enemies that's on the way? NOTHING, YOU STAND THERE LIKE A LEMON AND JUST WATCH THE ENEMIES GET CLOSER.

You aren't DOING anything.

You aren't ACCOMPLISHING anything.

Neither within the context of the map/battle, nor in the literal sense within the circle.

The whole "stand in this circle" works alright in standard shooter games because you don't have to stand there and wait for the enemy to get closer.
No
You actively take cover, locate the enemy, and open fire.
That's why battlefield's conquest works for itself.

Mordhau's Frontline, is a copy of Battlefield 1's Frontlines mode. A gamemode that died a month after its launch.

@Naleaus said:
What is exciting about standing next to a cart, ram, wall, trebuchet, etc? You do nothing besides stand there. The overall progression of the map had more to do with it, but the gameplay loop was mostly to force combat in centralized locations.

The gameplay loop of Frontline involves

It's literally TDM with Circles

@Naleaus said:
The combat itself is the exciting part.

See, you say that.

Otherwise the playerbase of the closed alpha wouldn't be fucking dead.

No, what's exciting, is the actual gameplay of the main mode of the game.

It's why chivalry stayed alive for as long as it did.
Because Team Objective, was a very exciting, and extremely engaging gamemode.
It kept Chivalry alive, DESPITE the game having garbage servers, netcode, broken animations, and jank ass side effects of the combat that literally pushed new players away from the game.

and if Frontline as we know it IS Mordhau, I don't want to play it.

Hmm yes, create all these irrelevent features and side missions that provide bonuses to your team while completely ignoring the actual main form of gameplay of the mode.

Ah yes the main form of gameplay in the mode.

It's the kind of gameplay that a high tier gamemode that lives for YEARS, contains.

No, it's fucking sarcasm. The mode as it stands will literally die within months.

All the time you spend running around would be FINE, if you actually DID SOMETHING when you got to your destination.

mfw bodkin just wants to turn it into battlefield and completely misses the entire point of why the mode is boring.