If the halberd gets a buff, so should the 10pt spear.

Currently, the halberd stabs in both grips do more damage than the spear's stab. While also being exactly the same speed.

The alt grip halberd stab is only 15cm shorter than the spear's stab.

While the halberd also has big boy damage around the world draggable tactical nuke swings.

If the halberd is buffed, there's even less reason to take the actual spear.

If the halberd is brought down in point cost, there would be no reason to take the spear instead of it, other than the people who actually think they can reliabily utilize the 15 extra cm of reach.

And before you go "but the spear has the short grip mode".

Yeah, but we don't take long pole-arms to use the short fucking grip.

If you take the 10pt spear, and the first fucking thing you do when you spawn, is switch it to the short grip.

Just use the F O U R point short spear instead.

Swap the halberd's alt grip with the spear's stupid alt grip. Raise its point cost to 12. It has a faster shorter scarier grip, but you can't take bloodlust now.

Remove the spear's alt grip, give it a throw, reduce its points to 8. You can now take a backup weapon with the spear and still have some armor, while you lose the ability to spam the shit out of stabs (something people hate a lot).

You mean like the full heavy armor people riding around on cavalry at mach 6 getting free instakills on everyone?

Or the heavy armor people that don't take weapons in their loadout and just pick shit up off the ground? Including spears?

It's funny because if you take heavier armor with a spear, you're slower, and thus the footwork that is REQUIRED for using the spear properly? Yeah that's harder or just straight impossible now because of how slow you are.

In the stats page in the menu, it does not even show deaths, and TBH, it's better that it doesn't.

Global K:D as a whole is a flawed metric of player skill, and not just from a "playing the objective so I die a lot" viewpoint.

Fast forward a few months and they're much better at the game, they open up their stats and see their K:D permanently scarred by their early gameplay in the game.

This metric often touted as one that "shows how good you are", is rendered pointless by the fact that it is an all time thing.

In truth, if you want to use K:D as a metric, it can only really be done on a per match basis. And even then, it needs to be cross referenced with the overall acquired score and general gameplay style during the match.

In short, will K:D become a thing on the stats page? I don't fucking know.

My personal opinion on the matter however? It's not really needed.

get that trash tier normie garbage away from here

we here at mordhau international would only accept a plague mode.

I'll sum this up for you

marathon, literally never, not when it's applicable to every weapon
high supply, no, go find another ammo box or stop spamming shit
guillotine, lol no
stockpiler, again, just go find a box
stable boy, why waste points on this when 9/10 times you're going to just get blasted by the lance instead anyway
achilles, fuck no
lightfoot: despite how stupid bear traps are, having a perk to just 100% counter them is also stupid
you thought, would literally be pointless as your killfeed wouldn't show up, nor would the points from killing you, you'd just get stabbed while on the ground
quick hands, press 2
poor shot, no
carpenter, fucking jesus christ god no
sprinter, serves no purpose other than to be annoying
beastmaster, no
glass cannon, fucking no
canadian, waste of points just press the buttons
berserker, fucking no, we have enough lmb spam as it is
blind, ah yes, more useless players on the team
spy, no
shieldbash, no
vaudeville hook, or just hit them a lot

parkour, the only one here that could be alright/somewhatuseful/somewhat balanced

if anything, the voice and emote options should be in 4 option lists

5 option lists works well however, as you just move your pointer over to hit 5. 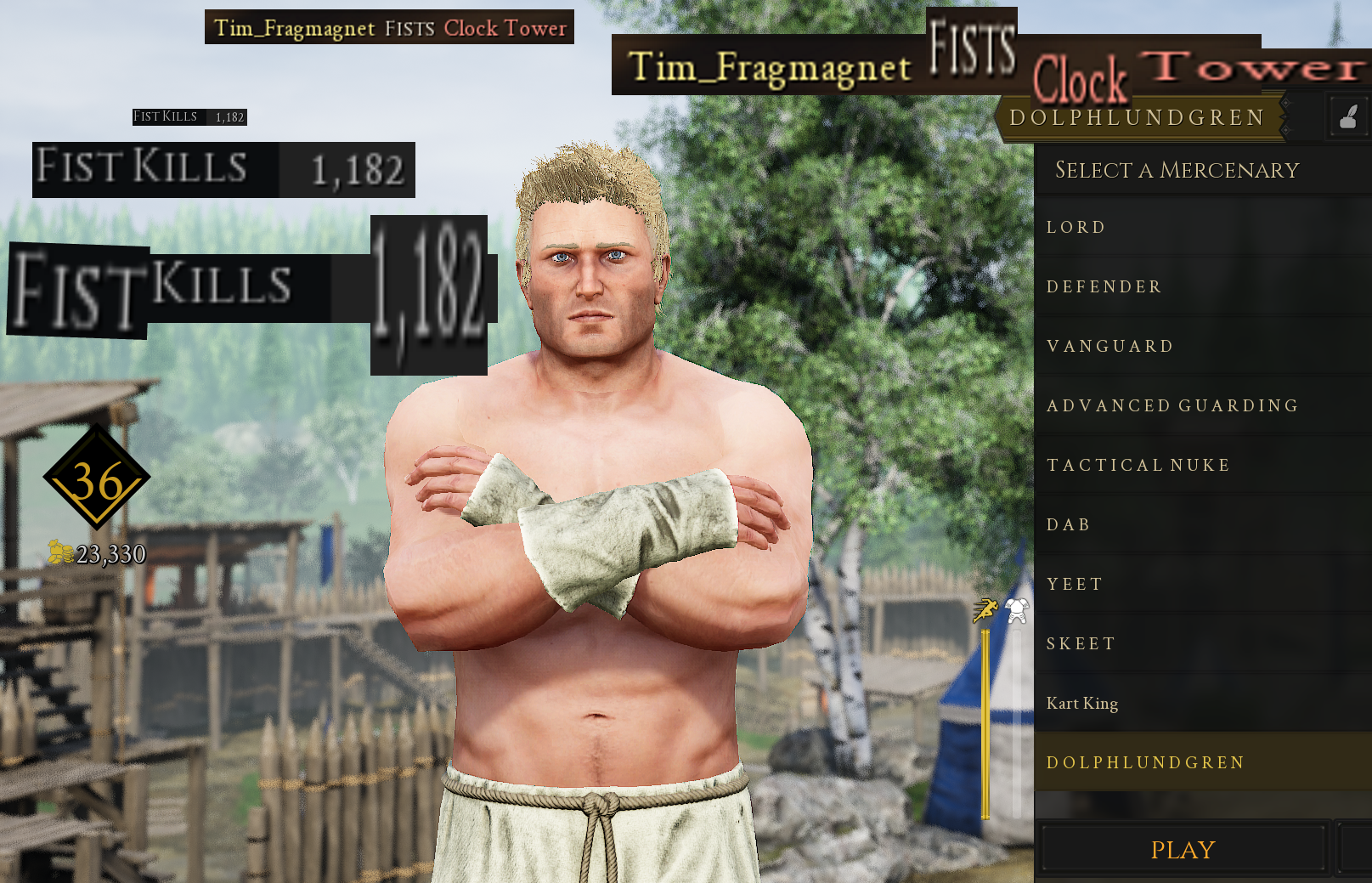 If more boxing perks get added, I'll fucking do it.

I improved the dolph lundgren loadout 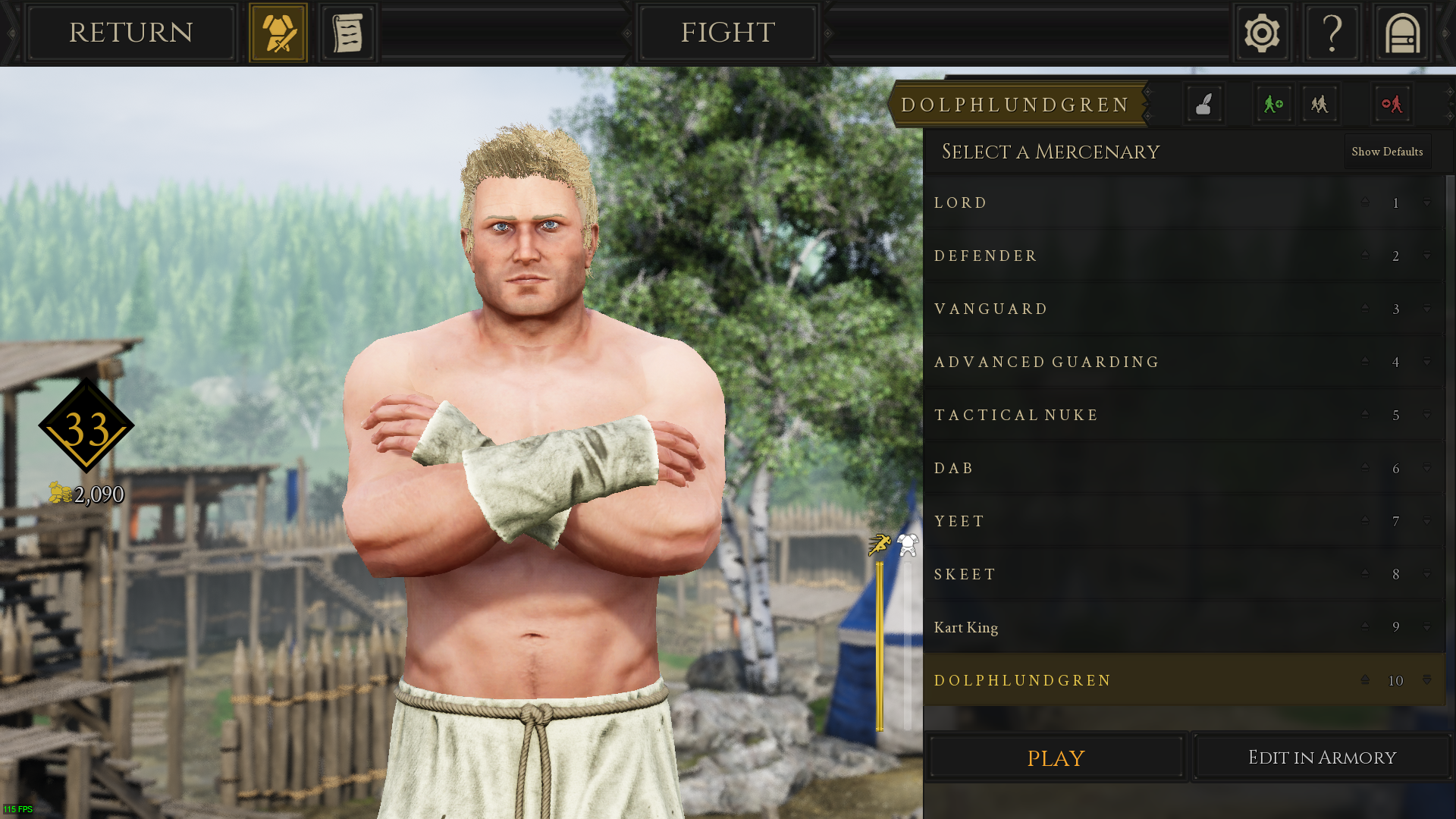 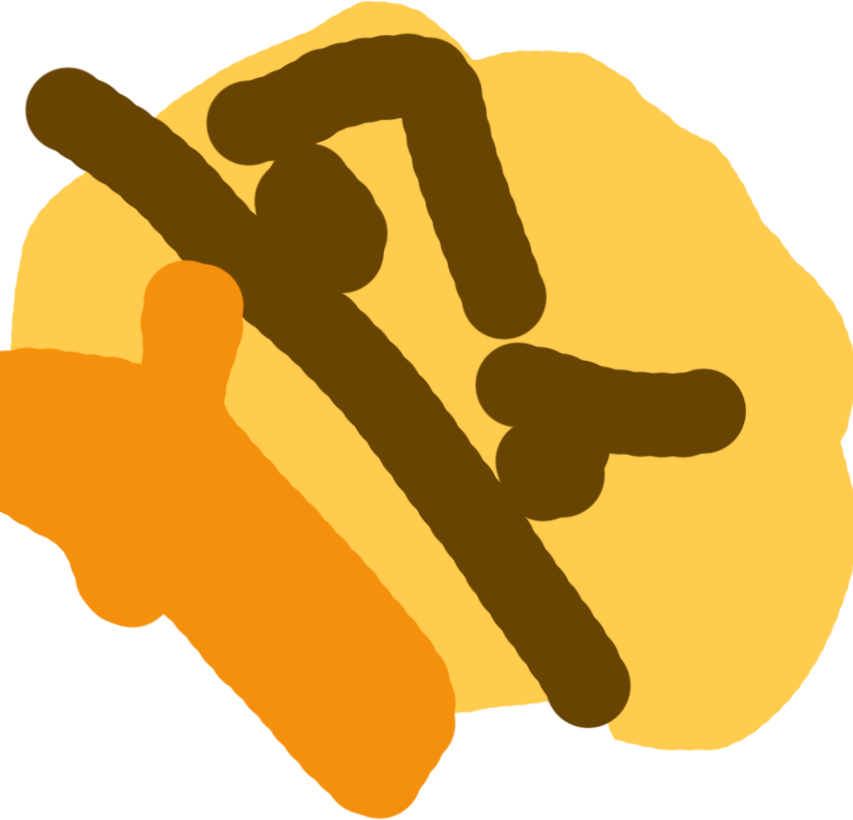 I swear, every time I fucking post this shit, it gets bigger.

My guess is that they messed with the duration of the window during a riposte during which you can't be flinched.

The only real loadout 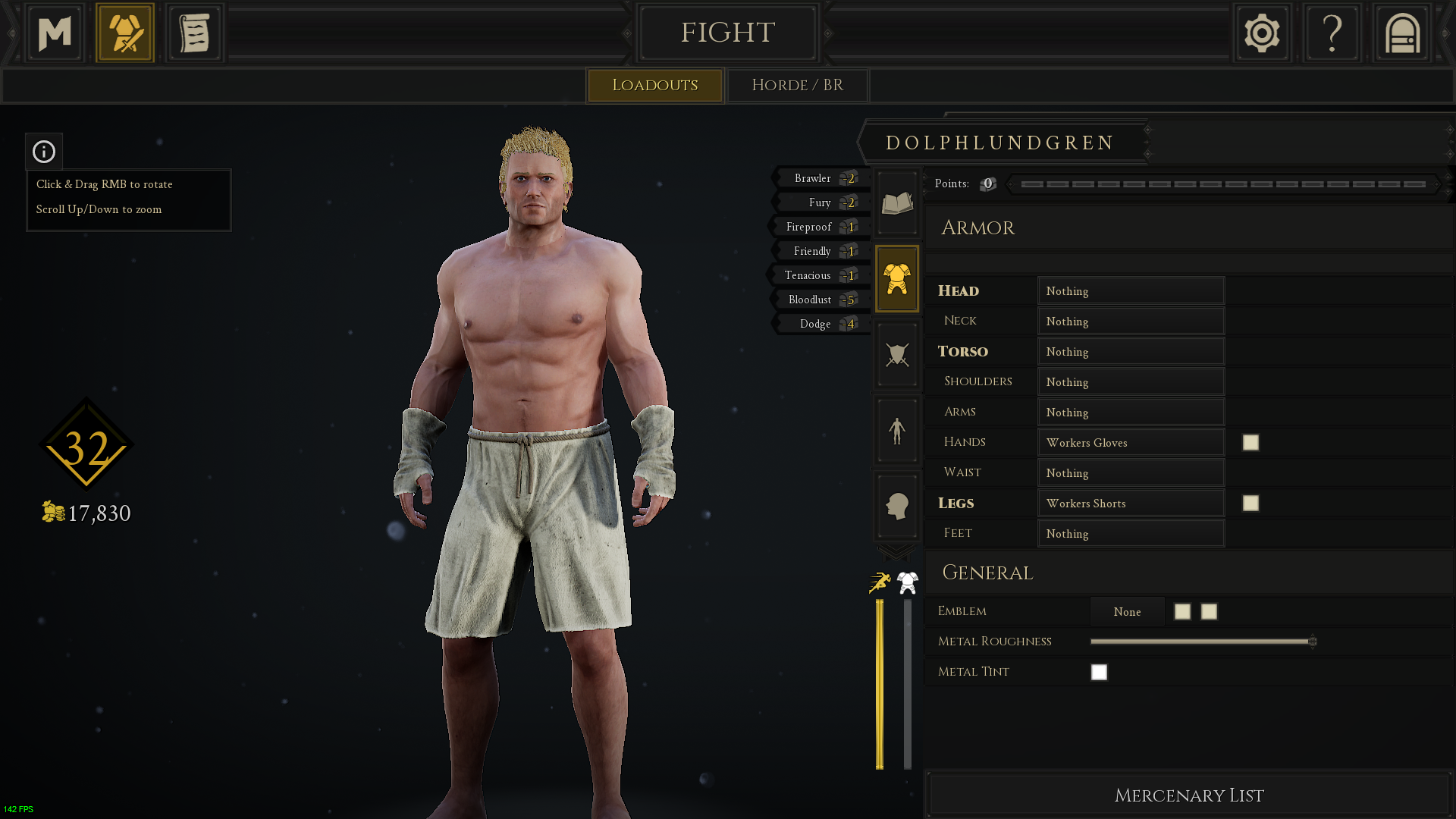 The truest god player is one that gets 40 kills during a match with no armor, only using fists, with the brawler and dodge perk.

Maximum mobility, the inability to parry. Dodge or die.

I only got 38 doing this tho so I'm fucking trash. The 1v4 was nice however. As was the kill against charging cavalry.

needing bloodlust to get 80 kills

Imagine calling yourself a clan in 2019.

I will verify though, they have been around for a while.

And while even the chivalry veterans are still smooshing all that mordhau mechanic mumbo jumbo into their brains, if you are actually looking for people to teach you and you're up for a bit of guided learning, they should do fine.

Much better than the "T H I S IS THE TOP TIER META OF 2019 MORDHAU in TEN MINUTES AND TWELVE SECONDS GUYS" youtube videos by people who have played mordhau for 3 hours and chivalry never.

@Tim_Fragmagnet said:
Also gold SHOULD to be calculated as (score/10)+25 bonus for each objective under your team's control at the end of the game +25 for each contextual objective you participate in at least 25% of, like breaking things, or freeing peasants + 100 gold if you win.

I don't know, sometimes even with top score I don't get the same reward as if I was less on the frontline and using more of a support character (XP wise at least). It just feels random imo.

I was saying that it SHOULD be calculated that way, not that it IS. I have no idea how it's calculated right now.