This is RAM if I'm not wrong. It shouldn't be using 14 gigs of RAM and then crash.
But it's the MODS!
If Josh didn't spot that I would have read over it. Before even daring to open a forum post, get rid of your mods and try launching the UNMODDED game. My mods folder is empty but I have a couple of .json files called "downloaded_mods" and "installed_mods", make sure you know how to use those files and make the game load your mod properly.

If you did not install any mod, go to that "mods" folder and delete everything.

@Josh said:
The error message it gives "Trailing magic number (0d) in 'D:/Temp/SteamLibrary/steamapps/common/Mordhau/Mordhau/Content/.modio/mods/45882/acaup.pak' is different than the expected one. Verify your installation" makes it look like an installed mod is causing the problem.

I'm guessing that verifying game files doesn't actually delete mods, so the safest thing to try is to move the entire "D:/Temp/SteamLibrary/steamapps/common/Mordhau" folder somewhere else as a backup, then try re-downloading/installing Mordhau. You should then have a fresh installation with no mods and hopefully it'll at least let the game start up.

I'll try, but I never downloaded any mods.

Game is still crashing on startup..

And yes I have tried reinstalling, updating my graphics drivers, verifying my game files, etc etc.

It's not on my end, this problem only started happening after patch #14.

Fix this ASAP please, don't make us wait another month for it.

Been waiting to play for almost a month now..

Go ahead and elaborate on that one. So far, the only thing Chiv has that Mordhau doesn't have is the front and center overhead swing with hammer. Now the over head swings are slightly angled to left or right.

In a nutshell; Mordhau only has opposite-side combos, whereas Chiv (as a general rule) only has same-side combos. In Chivalry, the exceptions being same attack combos (i.e. Overhead > Alt-Overhead, or Slash > Alt-Slash). Stab is also partly exempt from this rule (as there is no Alt-Stab), allowing for both same & opposite-side combos.

You could put off some ace combos in Chiv. Mordhau's combos are meh at best.

Combos are like the glue that bind the rest of the combat together, & make the combat feel fluid. Having only opposite-side combos slows down the combat/gameplay, & only serves to lower the skill-ceiling. Especially with regard to team fights, & 1vX (which is where the skill-ceiling lies with this genre). As they are quite predictable, & not very creative (just figures of eights).

A while back I compiled a list of all available combos in both games. Please note that it is for binds, not 240 system.

Really good points, should have your own thread.

@Rergato said:
Should be limited to daggers or the short sword, and should cost at least 8 points

@SushiFish said:
It's an interesting perk suggestion, but I wish you had added more meat to the bone. To say just double damage to the back is a little vague, and it sounds just annoying to begin with.

Firsly, it would just be frustrating if it were left to just deal double damage to the back, with the amount of backstrikes you are bound to take while playing Skirmish or FL. And also it should be limited to specific weapons, like one-handers so it may not be abused on heavy hitting weapons for a one shot kill.

The way I'd propose this idea, would be if this could be a perk used as a way to instantly kill someone you have snuck up on while being out of combat, like an archer or least something to give you a reward for actually sneaking up to someone. It should be strictly for one handers only.

This one is a bit tricky to balance imo.

Think it would be cool to have a perk where your damage is doubled if hitting someone from behind.

Edit: The core idea is to have a perk that rewards you for sneaking up on someone. This perk would likely be limited to one handers and daggers. And would probably cost something like 8 points to use.

@Psikraut said:
When we are doing female warriors because we dont care about history why not add unicorns and flameswords. Its all the same. Fantasy.

Then flameswords and unicorns too right? There are fryingpans in the game so we should throw away all historicity guys. I want ork models and elf models also. There are frying pans so why not orks?

You are confusing authenticity with fantasy. Mordhau is not an authentic medieval experience, but it's not outright fantasy. Women are real, orks and unicorns are not.

Women on medieval battlefields is outright fantasy though. The step to orks and elves is miniscule from there on.

I bet you also think the Earth is flat, huh.
There’s women fighters in a lot of shitholes around the world, like Iraq for example. When shit goes down and your country is under attack your genitals don’t dictate if you’re going to fight for your life and home.

I made an abomination yesterday, a zweihander dodge man dressed up like the main character from the silly game “Kingdom Hearts”, yellow shoes and all. I could jump around like a fucking cat or a roshawn. I’ve seen even more ridiculous things, and I love it. If you’re looking for medieval simulation, or a “historical game”, this isn’t it 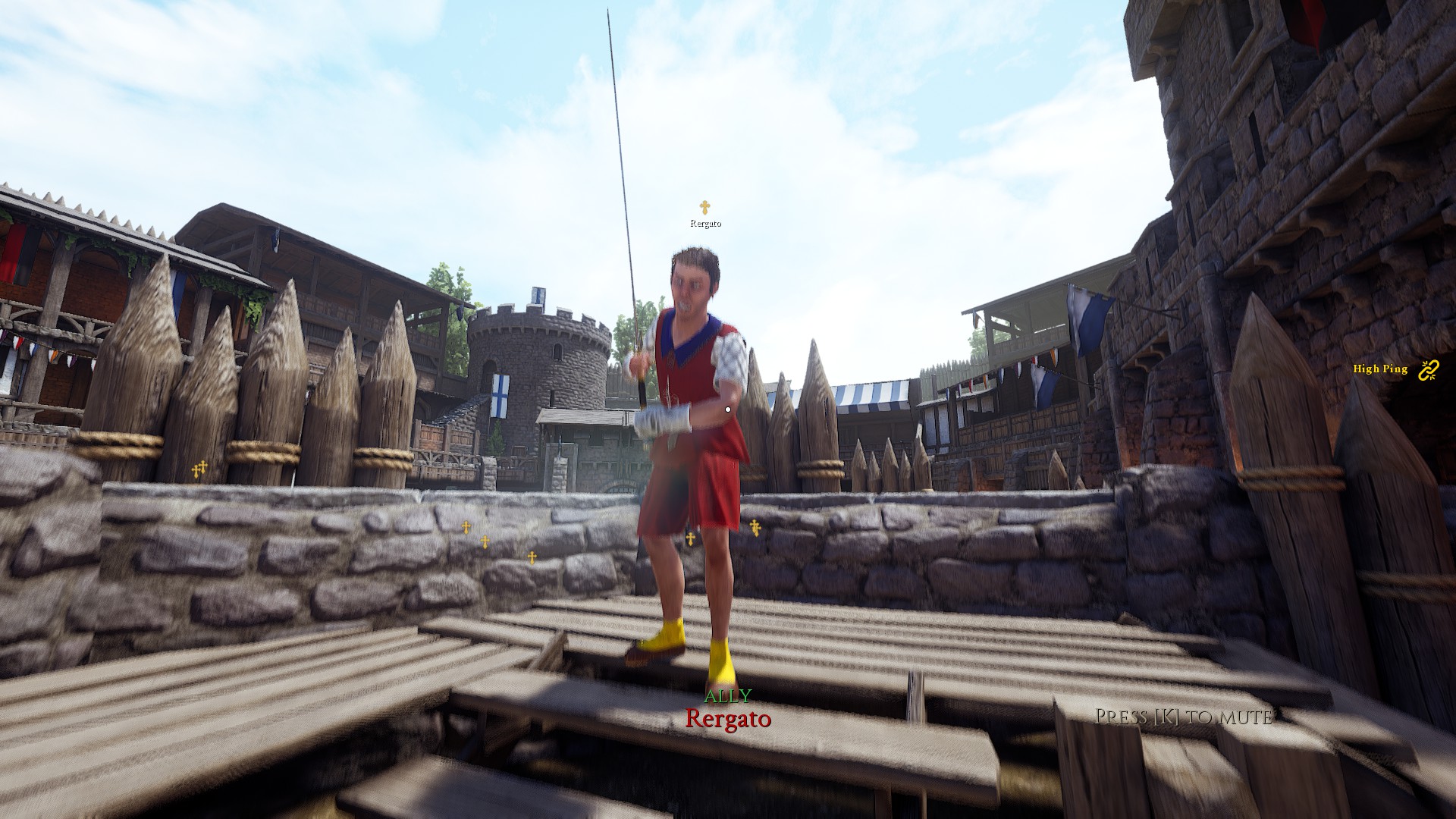 You should see my current in game build. I look straight out of anime, pure dagger. And I'm rekting people with it.

Tempted to record and put naruto music on it.

My steam name is Eve btw for people looking out for me.

That would be fucking awesome.

Instruments should add temporary perks when in range of the sound.

Vallhorn if blown loud and once will give a temporary dmg protection buff, but can only be activated once every 20 seconds. So great for blowing before a massive charge, on a position.

Lute slowly heals players who are near the player.

@yeahnil said:
(Which is also something that should be adressed. Stamina drain on light vs heavy weapons, but that's an entirely new topic)

It already is a thing. Get a buddy to hit you with a maul and parry him with a dagger. See how many times you can do that before you run out of stamina. If you couldn't parry maul with dagger ever it would terrible game design. Gameplay > realism. (Plus you can defend with a dagger against a big maul IRL, but to make it 'realistic' they would have to make specific animations for it which would be a stupid waste of time and money)

Yeah actually if there were two people and one had a maul, and the other a dagger. I'd put my money on the guy with the dagger. Maul is a pretty unwieldy weapon.

@Punished_Rhodesian said:
Women? I mean, yeah - fucking why not? I love customization in games and having female shit just opens up options for me to make shit like Brianne from GoT or something.
I think aiming this game to be 'realistic in its depiction of the setting' is pretty unneeded. In fact - I reckon they should go nuts and add all sorts of shit. Add fucking Katanas for ninjabois, throwing stars, whatever.
I think this game would be best letting its hair down and just letting people use it as a canvas to do whatever the fuck they want in terms of customization.

I don't think people really care for this being ultra realistic - I have a Minecraft Steve build myself - and I've seen people with gnome builds, so, why the hell not have females for the sake of it.

@Runagate said:
The graphics seem pretty, and I like the believable equipment but have they ever shown extended combat footage? I'm curious as to if it actually works.

They don't get into any depth on that video, only showing how it approximately controls. How do parries work? How does stamina work?

I think Chivalry didn't have that much in depth information on how their combat system worked when they first had their kickstarter. Certainly certainly didn't have as much information as Mordhau did. And yet I still have more fun on Chivalry than I do Mordhau. I really thought with all the details the devs were giving that this game was going to be one of the greatest combat systems ever made. But at best it's 'ok'. And 'ok' isn't good enough.