I'm not an archery guy, but I think this would be a neat addition, different ammo types would definitely help spice archery up.

Crossposting from another thread about cloth physics.

@Bear264 said:
I made sure all of the console stuff was in order, and tested this with a friend (he also has a 1070). and here is what we found

EDIT: this test was done in deathmatch. Playing in frontline it looks like all cloth physics are off except for my own regardless of looking away or not, and cloth items.

It looks like cloth physics aren't functioning as intended over all. I have a pretty high end system and cloth physics and performance are really inconsistent for me when I have them turned on.

I feel really dirty for learning how to do this, it's not even that hard to pull off like I first thought it was. I play with a really low sensitivity too, so spinning moves are supposed to be harder for me. I was regularly landing these in public duel servers, and it felt cheap each time.

As seen in the GIF, It's not a instant win move or anything like that. But it's just... Chivalry-esque ballerina shit. Mordhau isn't supposed to have spin moves like this.

Its not a spin move, the morph just makes it look like that but in reality the damage hitbox is nonexistant until at the last swing that you made

Considering that the main point of this move is to spin around to conceal a morph, I would classify this as a spin move.

In chivalry you can actually move the hitbox at full 360, as in one swing can be moved 360 degrees

I won't argue that, that kind of spinning in chivalry is WAY worse than what this is.

This move in FPV and TPV

I feel really dirty for learning how to do this, it's not even that hard to pull off like I first thought it was. I play with a really low sensitivity too, so spinning moves are supposed to be harder for me. I was regularly landing these in public duel servers, and it felt cheap each time.

As seen in the GIF, It's not a instant win move or anything like that. But it's just... Chivalry-esque ballerina shit. Mordhau isn't supposed to have spin moves like this.

Apologies if I got any terminology wrong

I'm not denying the skill you need to pull this off effectively, but it reminds me of an old thread about 360 drags. After reviewing the footage, I'm left wondering if this is something that was meant to be in Mordhau.

Right now we just have to deal with it. You are not alone in your frustrations with the emote menu.

Oh God yes, why are there only three options!?

Yeah you could go 3/3/3, with whatever perks you want and no weapon, But the trade off is you start with NO WEAPON and have to scavenge off the field, and that is random and unreliable. You could have a friend drop you a weapon, but then your friend is still using loadout points. So they will be heading into battle weaker because they just gave you a weapon. You also have to have a pretty patient friend for them to do that every time you die.

@Bear264 said:
Bump. There may be technical limitations for this, but it would be a nice feature.

I'm no expert but several games do it, even Chivalry. They probably just didn't think it was worth implementing for release.

I'm doubtful of that, they have had technical difficulties related to receiving gold and exp since it was introduced in the Beta

It would make sense for heavier armor to be louder, for both balance and realism.

Bump. There may be technical limitations for this, but it would be a nice feature.

Welp, I fucked up XD. I didn't realize while making this post that friendly had changed to reduce incoming team damage too.

EDIT: Looks like I forgot to read the fine print, as the "friendly" PERK already reduces incoming team damage by 50%. this whole post hinges on "friendly" only reducing outgoing team damage, so almost all of it is wrong.

We all know the perk "friendly" lets you do 50% less damage to teammates, but if we are being honest here, not many people are using it. With this new 1-pointer perk, "Standard-Bearer", you would take 50% less damage from teammates. Let's look at this hypothetically; take a teammate that is swinging a zweihander and hitting you in the T3 heavy chest doing raw damage of 40.

Keep in mind that in the current version of the game,

Alright, on to the hypothetical 40 damage to T3 chest

What happens most often right now is scenario 1, and I don't think anybody is too thrilled about it. After "Standard-Bearer" is introduced, I foresee the most common scenario being scenario 3. If players want to have the least amount of team damage and most amount of pushing power then people will take both "friendly" and "Standard-Bearer" and make scenario 4 more common. If scenario 4 is deemed too low amount of damage to be received, then we will have scenario 5 instead, which is practically identical to scenario 2 and 3.

I know avoiding team damage and team-killing is part of the skill in this game, but this seems like a nice addition that would alleviate some of the team-killing saltiness that seems to be in every frontline server. This idea is open to suggestions, modification, and criticism

@Deckard112 said:
I hope this gets fixed. Can we someone report this in a more serious matter? I have a feeling this will not be fixed in the near future. If ever.

We are already have video of the bug, are bumping this thread, AND Marox himself posted here. I think the only thing left we could realistically do is more testing.

@yvesgomes said:
Also, do we agree that Frontlines takes way too long? At least the public matches - I don't know about competitive.

I think the matches would be much more fun if they were about 2/3 a long as now. So, please consider either making points drop faster, or making team start with 700 points, instead 100

I like the fact they go on for so long, makes it feels like a proper battle. There is Team Deathmatch, Deathmatch, or skirmishes if you want shorter faster-paced games.

The "chainmail" and "basic shoulders round" clip with each other on all settings with the body slider. 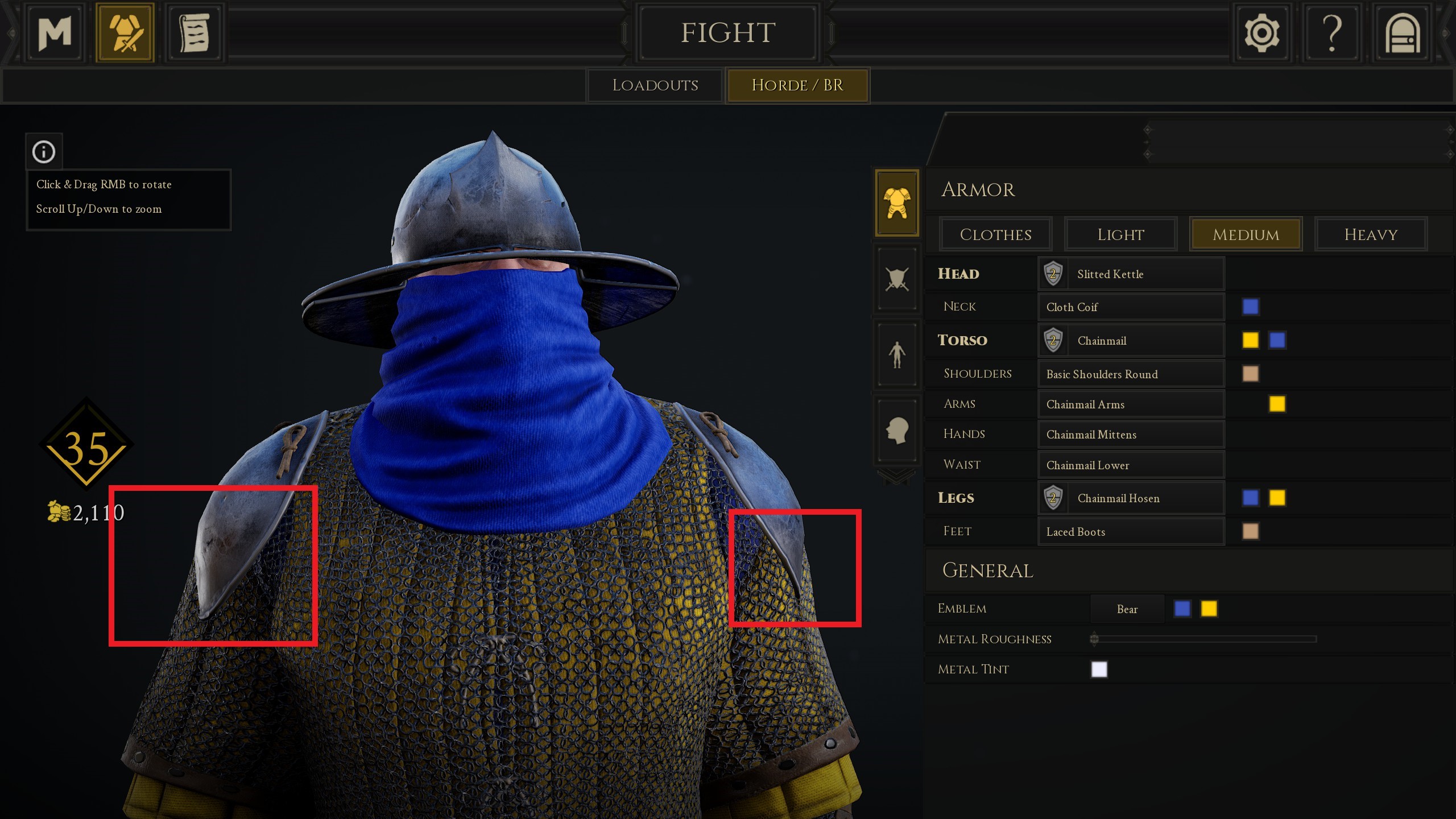 Bump for an official answer, it's not super clear how it works.

yeah, worked for me! Also had the nice side effect of cycling my main menu mercenary to show friends.

So do you type "restartlevel" when it is doing the loading icon?

I got this issue recently. purchasing was working fine until I bought "landsknecht arms". Maybe that has something to do with it?