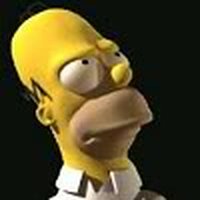 Have created the server and people can connect, but I have some issues:

Any workaround? How to change default map?

So you do not want DefaultGame.ini that is the wrong file and the wrong location. Depending on where you installed the game you are looking for C:......Mordhau/saved/config/WindowsServer and then Game.ini

@RifleInfantry said:
Thanks! Any idea what these do in specific?

r.Streaming.AmortizeCPUToGPUCopy=1
This forces texture streaming from the CPU to the GPU and in return frees up the CPU for other gaming processing. Thus if you have a beefy GPU but a not so beefy CPU, it can help remove the stuttering because the GPU doesn't have to wait on the CPU for data.

r.Streaming.MaxNumTexturesToStreamPerFrame=1
This changes the number of Textures to stream, 1 texture per one frame. Once again controlling the rate at which the textures are streamed to the game.

@StrykerMontgomery said:
How did you know to try this and what else can I try? I totally have to hit this up next time i play. Does the xomand save? Also how i open console?

I am on the official Discord, an Alpha player, and know several of the devs. So if you input them via the console to not add the "=" and 1 turns it on 0 turns it off. I the case of the second command that is any number, I believe "0" is default. Additionally if you use the console you have to put it in each time you run the game. If you add it to the Engine.ini then copy and paste it exactly where and how I posted it above.

Having extreme stutters in Frontline/invasion mode? Try using these 2 commands in the console. (Default value is 0)
r.Streaming.AmortizeCPUToGPUCopy 1
r.Streaming.MaxNumTexturesToStreamPerFrame 1

It can also be put in your Engine.ini as

Let's start by saying that I absolutely love Mordhau! And the dev team is doing a fine job!

I've started this topic as I would really love to create some custom mods (Whether it's adding Babu Friks 'Ahahahhhhhh' into the game as a sound or creating John Snow's 'Longclaw' from GOT as a weapon skin.) but the issue is that I have no idea how to do this. With the .PAK update and using Unreal Engine 4 I'm totally unfamiliar with how any of this would now work. There's little to no documentation on how to mod on Mordhau (That I can find anyway). I'm fine with modeling within Blender but getting that into a .pak file I'm clueless. I find people who have already created a mod have some sort of .uexp/.uasset files and I have no idea how to import/create these files.

If you guys have any documentation or can lend me some tips on this, I'd greatly appreciate it!

Many of your questions are answered in the Mordhau Mapping and modding discord.
https://discord.gg/kR8FSM

Missing those Chiv perks along with server browser, end of round info, Message of the Day for server owners....and on and on.

The catapult did not need any changes as it should be considered a secondary objective. It already has solid counters from the ballistas, archers, fire pots, smoke pots, and of course just break it with weapons. It is also the only thing that can prevents the commander/builder camping and waiting out the clock. If a team fails to deal with a catapult then that is the fault of that team. Dumbing down a game by nerfing tactics is never a good thing.

@Cyrus said:
Here is the link to Ubisofts game play values across console and PC

--> In June 2018 — more than a year after the game came out — For Honor was nominated for best ongoing game at the E3 Game Critics Awards.

It now has more than 15 million registered players, according to Ubisoft.

Sorry but game owners VS actual players. For Honor average daily players are equal to Mordhau. Thanks for playing.... 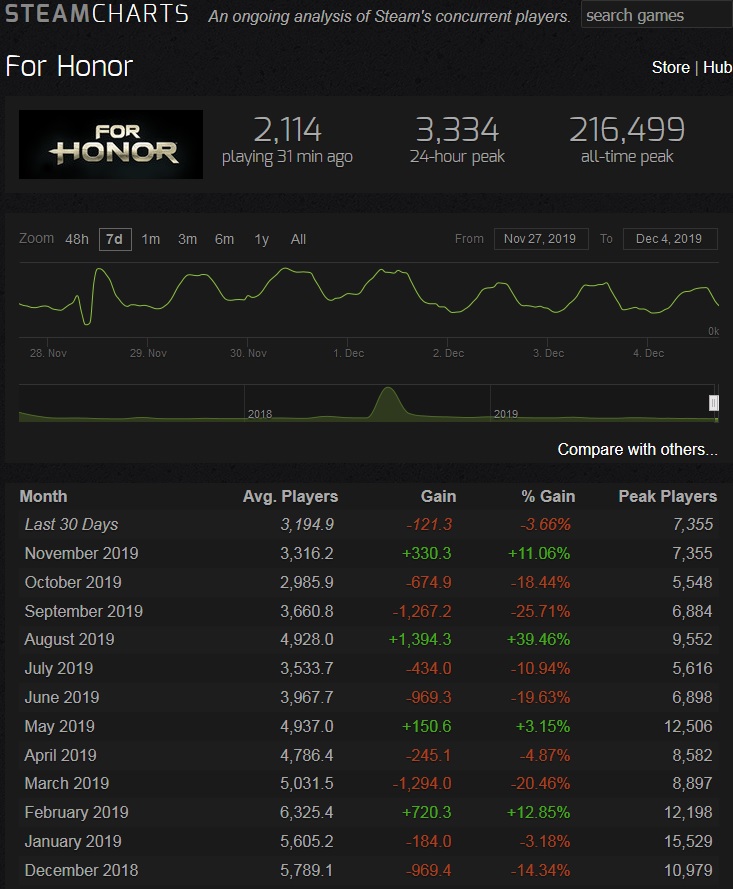 As some may know the effort to make the game run smoother, the devs placed a lot of the default config files along with the majority of files in .PAK files. So your dedicated server will default to a 60 tick rate server. If you were running a 90 or 120 tick rate server before the patch here is the way to do it. In the .....Mordhau/Saved/Config/WindowsServer/UDKEngine.ini Place the following lines:

Lan tick rate is really irrelevant. and you are welcome.

@隊友都垃圾很可憐 said:
Can you tell me how to make the respawn time of all modes consistent?

@隊友都垃圾很可憐 said:
Can you tell me how to make the respawn time of all modes consistent?

Here is the settings for changing respawn times in the server Game.ini

@WoofWoof said:
Well, unfortunately I can't seem to get it working quite right. Whenever I rename or remove a file like you've suggested, the game throws errors that say it can't find dependencies to or from the files I've modified. I've asked another person how to do this but they were extremely vague. Told me I just have to rename and or delete files. To be honest I'm starting to get a bit annoyed by all of this, I don't know what else to do.

Make sure you rename the files with the .uasset file type of the weapon you want to disable. Dont disable a folder but the individual file. Now if you are looking at the server log, It will throw errors in the log but the server should run fine. Try one or two weapons at a time, run the server and test, then all more weapons and test. There maybe an unknown issue with the recent patches possibly effecting it but for me I see the occasional errors in red in the server logs but the server runs fine and the weapons are disabled.

@WoofWoof said:
Anyone know how to disable projectiles? I am able to disable collisions on most of them but I am looking to completely disable the entire use of them on my horde mode server. I've seen a few servers that have done this but I can't seem to replicate this.

File location: .../mordhau/Content/Mordhau/Blueprints/equipment/.... there you will have the folder of type and you will want to rename the @.uasset file type.
Example: ...Equipment/misc/BR_BearTrap.uasset
I just added an "A" to the front of the file name that way I still had the asset when I wanted to revert it back and all the ones I changed are easier to find.
Example: ...Equipment/misc/ABR_BearTrap.uasset

Ugh, man do we need a Server/Admin section on the forums.....
Are there any instructions about adding custom maps to the servers with the new ServerModAuthToken?

Sadly Ranked system is really not going to get players back that are leaving in droves. It really only appeals to the dueler boys and the hard core fans. What is missing is content content content. SDK along with a mapping contest to add the top 5 winners to official servers would instantly increase content for free and actually get players playing again. Currently they are getting bored with the same maps, same modes and the same broken issues.

Server hosts are also annoyed by the limited resources, access, control, options and knowledge base for tweaking or personalizing and managing their servers since there is no RCON or admin tools. 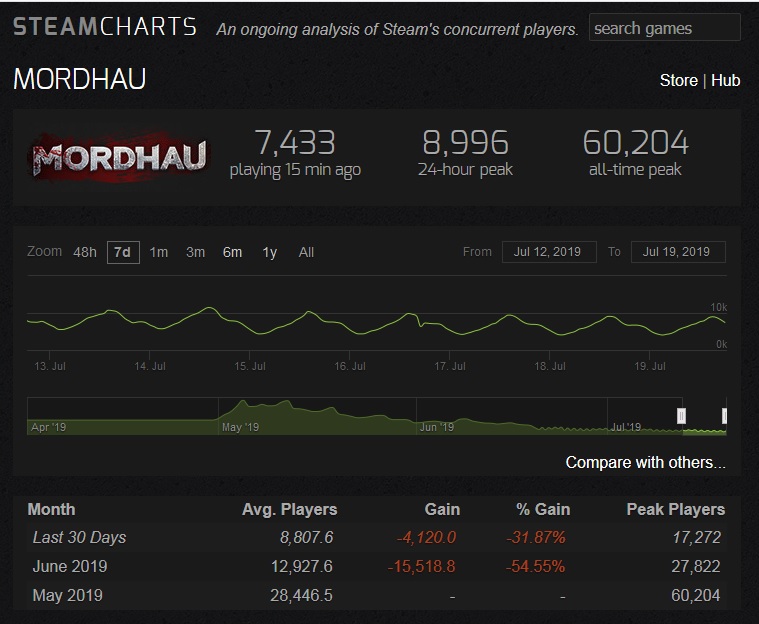 @ĶiĻăƦesrumpMcBøøgerballls said:
I have a Mordhau stalker who is so filled with autistic rage as he has been stream sniping for 2 days straight. Here is his steam ID: https://steamcommunity.com/id/sniperhunter1/
And his Discord (at the moment) :
Him#2503

Already reported him but sadly things are really slow....

Well that really sucks, but what does that have to do with this thread?

Well that is what he is doing as well. He is watching the stream and as soon as he sees you are going to vote kick him, he gets you vote kicked as he has already got the votekick and player number in his console.

I have a Mordhau stalker who is so filled with autistic rage as he has been stream sniping for 2 days straight. Here is his steam ID: https://steamcommunity.com/id/sniperhunter1/
And his Discord (at the moment) :
Him#2503

Already reported him but sadly things are really slow....

glad you guys are looking into it.
Great job Jax,
now if you'd only respond to my pm about a topic getting pinned...

@PC_Principal said:
guess how many of those they get lol

JAX is only one guy and the devs are very limited in number. Keep in mind they get hundreds if not thousands of PMs and posts a day. So be patient as you can....