What's your Character Quality set to in options?

We know about this one, it's been around since the first days of the alpha afaik. Only difference is now they're completely naked, before they had briefs, because we got rid of the briefs. Haven't been able to pinpoint what causes it exactly yet.

@Cswic said:
How long is current early release window? And is it a static amount across weapons or different?

Early release is a percentage of animation which is fixed per attack, but the total time varies with weapons because their release times are different. It is also further increased (dynamically) in certain situations like look-up overheads and lookdown undercuts (this is what prevents back hits). Stabs and strikes have separate values, as do ripostes (because the animations are different).

In this patch we changed the look interpolation equations entirely, so this is probably a result of that. The interpolation time might be too low at the moment to smooth out the stuff the server sends, but it would be good to have a high framerate video instead of a gif, and the fps this was played at.

How are the 1P hitboxes different on local play?

They use the 1p animations in local play, hitboxes otherwise are based on 3p animations (on dedicated servers).

@marox said:
The only real difference with the messer is the model/tracers and obviously attack timings, the tracers and model seem fine and nothing particularly weird is done there, only other thing would be the timings.

Hmmm, what about the guard, is there a tracer there? The knife-like one doesn't have guard so maybe it's misleading somehow if it's using the same tracers as the one with guard?

No tracer on the guard, it's pretty much identical to the other tracer setups for swords

Adjusting the hitboxes in this case could lead to the other guy missing but it looking to him like the hit should've landed, although I agree the hits do feel disconnected, especially the mace hit. The only sensible solution other than hitbox adjustments (which might not help enough) would be to move the 1P model (and with it the camera) further in, but this would reduce some of the visual distance which might make it harder to see things to some degree.

The only real difference with the messer is the model/tracers and obviously attack timings, the tracers and model seem fine and nothing particularly weird is done there, only other thing would be the timings.

@Pred said:
Some weird stuff I recorded in maybe 2 hours of playing this patch. I made sure to play on decent ping (mostly high 40s-60) and none of these players was much lower or higher.

Also random thought - Messer seems to be highly overrepresented in all hit desyncs that happen to me.

If at all possible, a way to replicate something that you feel is wrong would be great, I know that's not that easy to do, but it pinpoints the issue more exactly. Doing it in a more controlled environment makes it easy to spot what the issues are. In some of those clips I'm not even sure what's wrong exactly.

I guess you feel you're getting hit out of range? The FOV is quite high, so I'm not sure whether it's an artifact of that or not. Testing this while standing would be one way to find out, but please don't do it in local play, as the hitboxes there in 1P are different (3p is OK though). You might want to try moving the camera distance in (so positive, not negative) although the distance it goes is quite limited. It might not even be the standing hits that are problematic, in this case it might be that walking backwards and someone following you and hitting you with the tip of the weapon online causes this.

@ÐMontyleGueux said:
What about when you hit someone who has a ping of 40ms, the game waits 40ms to see if the user didn't parry or chamber on time before damaging the user. Doing so for user with a ping lower than 70-80 shouldn't look too wierd. I would MUCH rather seeing a very tiny delay when I hit someone instead of having to time my parry and chambers not to quickly to read the incoming attack but not too late so I don't get fucked by latency.

This is a non-solution. Then people are just going to push that boundary instead and have that edge case pop up.

@Frise said:
so, I just did a frame by frame of these clips, and the time between my input and getting hit is on average 4 frames. That's 66ms, while I had a consistent ping of 56ms. My timing wasn't even that precise.

Is there a command to see packetloss? I wanna check that out, because I don't think it's likely since I had very good packetloss values in Chiv and don't use wifi.

I doubt it's packet loss in this case, this timing is just extremely late. The rules of time can't be bended. However what is usually done in this case, and you're not going to like this, but it's psychologically forcing you to execute the action earlier.

By playing the attacker's animation slightly more forward in time, so it appears like it's more threatening to you now, thus forcing you to react in the future but by virtue of ping acting in your past which is the server's present. If I even worded that right. Either way, we don't do this because it makes hits look a little wonky, but it might be OK for some 20-30ms. It also influences drag reading in some sense, so it's hard to say.

I know for a fact it improves chamber ability on high ping, making it absurdly similar to local play (with high compensation values), but we haven't tested it extensively and probably makes drag reading quite messy. It might be interesting to expose a bunch of network parameters we use for the simulation and have you guys play with them to see what looks good, what looks bad, etc. It's all local clientside trickery with no actual changes to the server/game, so ultimately it doesn't matter what you choose to use as its just a visual aid.

@Lionheart Chevalier said:
@Marox I used to use feint and parry on the same button but I've noticed there was a huge delay between the feint and the parry animation and so I now use the auto-ftp button. Pressing two buttons will always be slower than pressing one but this delay was much greater than simply the difference of pressing two buttons and it was very noticeable.

Will this delay be removed?

There is/should be no delay, just the fact that clicking the same button twice is quite slow.

This is not what lag compensation does. It makes your attack slightly faster to account for the time it took to reach the server, and it makes your lockouts more lax to account for the same thing. But it cannot halt the entire game for everyone while waiting for your request. So with 50ms ping, you're just going to have to input ~25ms earlier on average if you're doing it at the absolute last millisecond compared to 0 ping, same goes with parry.

That said, turn and lookup/down interpolation is getting adjusted to be more consistent, as the stock UE4 implementation is peculiar to say the least. This should hopefully improve drag reading, but we will see to what extent.

"Frisé ur just angry 'cause ur bad!" No, Meph is a very good player but I consistently beat him. I chamber accels and footdrags all the time, it was just this particular case that was absolute bullshit and I had to look at it frame by frame.

"lol u shitter u have bad footwork!!!!1" I was strafing away from the attack. Yes, I could have angled my camera to move even further away from it, but nobody does that all the time because it makes you predictable and the opponent will adjust for it. And if you think that the pro players do that all the time, you're just wrong (https://www.twitch.tv/videos/242119337?t=00h02m52s).

"just parry" Saying that unreadable shit is ok because you can just parry is advocating for chambers to be a glorified gamble and for parrying to be a fucking joke.

I love this game so much but this shit is infuriating and it genuinely makes me sad that it hasn't been addressed after 15 patches, because I'm starting to lose hope that all the inconsistent, dumb shit is ever gonna be fixed.

Thanks, knowing fov, camera distance, ping and fps (game not video) would help. The audio cue is pretty useless, I agree, it's not just when it plays, right now all our sound files are pretty random in terms of when they reach the peak of the yell as well, which doesn't help.

I'm removing m.autoftp for the next patch and instead adding a Feint Or Block bind, which will try to feint, and if it succeeds it will end there, and if there's nothing to feint, it will block. This way you'll be able to have both the ftp and the feint/block bound to different buttons and will work better than the current hacky workaround for feint and parry on the same button.

@Pred said:
Something that I wanted to bring to the devs' attention. Right before this happened: 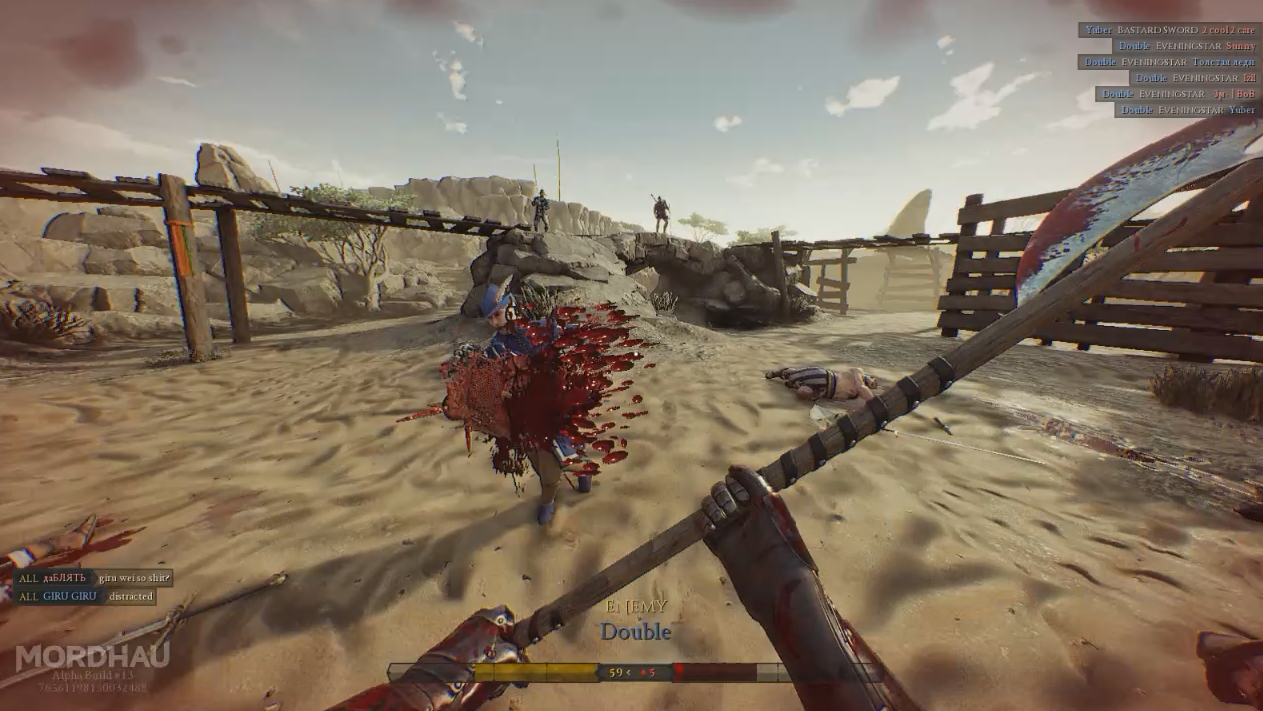 There was about a 0.5 second window when my opponent seemed to move at something like 200% speed, like the server lost track of him for a moment and then compensated. I thought that maybe I'm seeign things so I ignored it. I don't have the clip anymore. 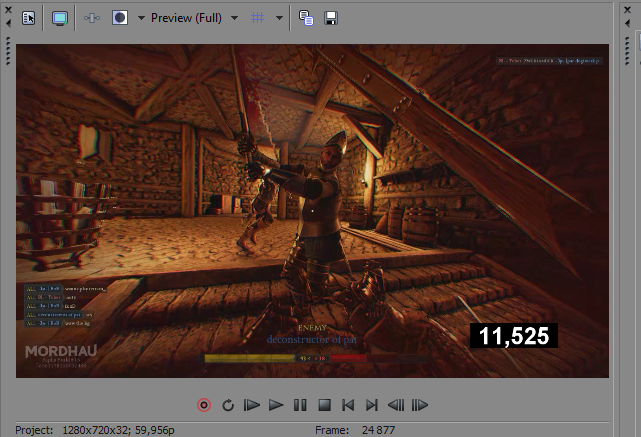 And then everything goes back to normal again.

Seems like it would be down to 3 possible things:

All 3 would bump the ping, although it might be for such a small duration that it would simply get averaged out and not noticeable on the scoreboard.

@SeaFerret said:
Is there a due date on bot name, custom emblem, and credit name submissions?

We'll probably slap one on there if people take too long, but there's no hurry right now.

Work continues on Mordhau and we're making good progress towards beta and release, but unfortunately we're not quite there yet. We do not intend to rush things, but since we promised early access to Beta backers by January, we are letting the Beta backers into the melee-focused Mordhau Alpha. If you are a beta backer, you will receive an email from us shortly with instructions on how to get your Steam key. Our actual Beta and Release dates will unfortunately have to shift a bit further into 2018 to make sure we can deliver content with an adequate attention to detail and polish. We will keep you updated on the matter!

We are also releasing some of the backer rewards that can now be claimed, and we have also begun collecting input for the personalized rewards. For those of you who backed at the corresponding tiers, you will see your rewards listed in the account tab on our website, and you will be able to fill out the input for personalized rewards there as well.

And finally, check out some cool Alpha combat footage below, captured by community member Trix:

@JasonBourne said:
How will this affect servers that change map every 10 mins with players ?

It won't, because this issue does not pertain to them