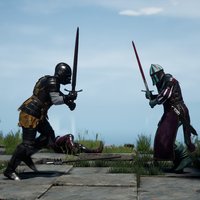 So after reinstaling it works better or still not? I didnt understand from your post?

Works worse now. I had to reinstall because it was stuck on "validating files" when it tried top udate with the patch 14 and nothing help but the reinstall. And yeah, now it works way worse for some reason.

Funny enough, it happened to me after the patch 14 as well.

I was always very quickly on the servers, almost always the first on Freitoria. People complained about the long loading times but I was surprised to see it worked so quickly for me. My PC is decent but not amazing. i7 8700k, gtx 1080 and 16GB RAM.

After the patch I get freezes/lag spikes in the main menu when I open the game and at the beginning when I connect to new server. Some demos lag too when I view them and now it takes ages to load to the Freitoria map

Truth to be told, there was some problems with the updating via steam, it went to validating files loop and I had to reinstall the whole game. Patch + reinstall seemed to make my game work like it does now

I just dont understand / know how could it reverse like that; it used to work fine, more than that even. It worked very well

Console went away with the patch 14 but I was able to rebind it, in the file that was near the same place where the demos are located (%appdata%...). I struggled with the patch 14 update though, as I tried to update it, it went to a loop. Saying something about validating files. It downloaded / went to 100% and just started all over again. I restarted steam, didn't quite help but I emptied one steam folder (downloads) and had to uninstall and reinstall the game, that got it to working state

Oddly, for me the performance has suffered and I have been thinking that something happened during the whole file validation / reinstall thing.

I usually downloaded everything super fast, the maps, especially in Freitoria I was pretty much always the first there, wondering about many people who said it took ages. After the new update though, it lags / freezer for a second few times on the main menu when I start the game. And now the maps take a very long time to download, especially Freitoria.

Im not complaining on the matter, just reporting it. Found it strange. I still cant quite understand why my game worked so fast before and why the whole validation thing happened and why did it change things. It's bit puzzling as I dont really have that great of a computer, it's goodish but nothing amazing (GTX 1080, i7 8700k & 16GB RAM)

But the game itself seems to run fine, pretty much as it ran before, good fps for the settings I have (pretty high and full hd resolution), it's just the main menu on the beginning and now connecting to the maps / servers

Not that much of a contribution I guess but just wanted to let it known. Been enjoying the game for nearly 200 hours already, definitely a new favorite of mine. Something crazy, awesome, strange or hilarious seem to still happen in every single game, sometimes pretty often in a single game too