Played with GTX 1070 throughout all Mordhau versions using whatever newest driver GeForce Experience gave me and never had any similar issues.

@PC_Principal said:
I think feint cost are low for pans? I never tried them. Not sure if that's a cheat, could be of course. It looked to me like he was just spending all his stamina in the end before dying. Could be autohotkey bind or macro.

this is definitely the windup of an attack being spammed faster than is possible in-game.

I think that's the start of a block animation and this guy uses the same cheats as the other one exposed like a month ago. They somehow continuously spam block without any recovery time.

Stop spreading misinformation about buckler and targe. All they do is change your defensive stats to theirs (that you can see and compare in Advanced tab) e.g. you have worse block view tolerances but presumably better parry drain negation and maybe turn cap. They also make it so when you out of stamina and lose them you gain some stamina back in contrary to conventional shields. It lets you in theory never lose your 1h weapon since you can just pick up your buckler and regen some stamina again.

Never trade ripostes. Just read and (double, triple, quadruple, ...)parry everything until you footwork out of the range of all opponents but one (by kiting others around him). Then kill him. Repeat until 1 guy left. 1v1 him. It's THAT easy lol.

P.S. After actually reading your post I can say that I would love to see this implementation tested. Being able to start an attack shortly after a failed parry is a huge change and it is hard to say what the meta will be.

From the beginning of the Mordhau test, there is one problem in the game which has not been solved. This is the behavior of "soft" objects on the map: tree foliage, banners, flags, tents, ropes, and the others. Weapons pass through them as if they are not there in some cases, and in the others, they behave like a metal. The apotheosis of this misunderstanding is the new tents on Camp, which are divided into 2 types - those you can go into and those that barricaded with barrels. The first behave as they are full metal, the second as they are holograms. It looks stupid in both cases. Such incidents will haunt us in the new maps.

The solution is to come up with the mechanics of the interaction of weapons and arrows with these "soft" objects, which will put an end to these problems once and for all and make it easier to create new maps for developers and will make a precedent of the correct execution for modders.

An example of implementation - arrows flying through foliage and fabric would fly a couple more meters and then continue to fly no longer as damaging props, but as items (like throwing weapons that have bounced off the walls) though they probably should not be obtainable for server performance. Plus, in contact with a non-solid object, a characteristic sound should be heard (branches breaking, rustling leaves, torn fabric), and a temporary trace like current local wounds could remain on the fabric. Weapons passing through non-solid objects, such as tents, can also signal met resistance with the sound of a tearing fabric. When in contact with the enemy slashes will always do sliding blows, and stabs will always do normal attacks, also leaving a trace on the fabric. 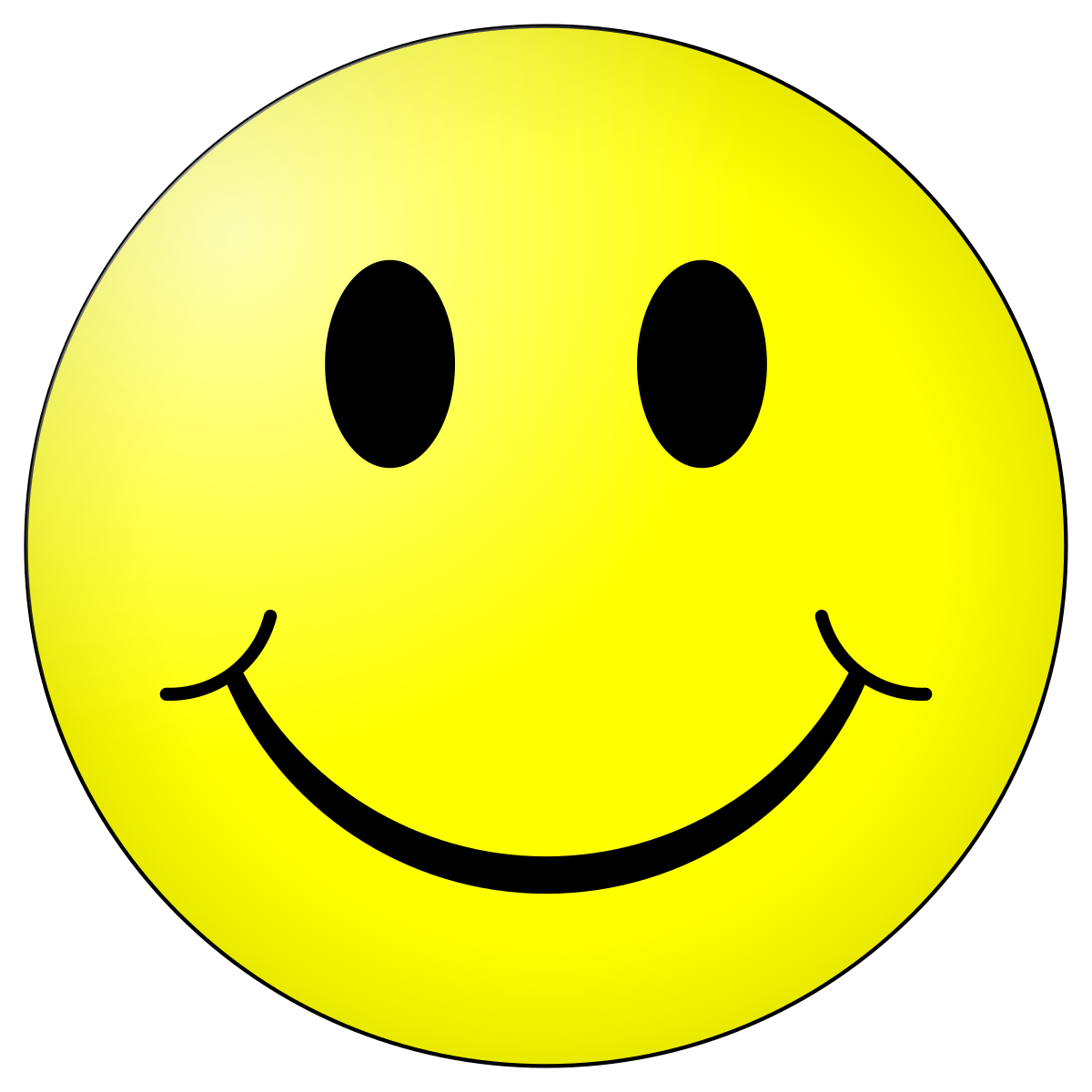 Well, perks can't really change gameplay by much since they don't have any visual clues so making them powerful is just unfair. Flesh wound is a nice example of that, some of your opponents just don't die when they should but you never know who yet its really important in 1vX situations so you start to remember people with this perk just by their loadout looks.

Also, this general perks you mentioned have point costs so what is the problem if they just generally make you more effective? it's not like they are autopick (except for fireproof but it's not its fault honestly), just a way to spend extra points.

I like the idea of redesigning perks into equipment though. Adding movement perks as light armour bonus will increase loadout diversity a lot. Maybe redesign this whole perk idea into additional equipment for visual clues. Like a tool belt into waist slot for Smith perk; brass knuckles into hands slot for Brawler;

Stop with this directional heresy. It never worked with Mordhau or Chivalry and never will. Shaking your camera around to "catch" strikes is not realistic and does not bring the game any closer to some kind of “realistic model”. Any modern discipline that uses melee weapons clearly shows that opponents actually look towards each other and not 90 degrees down, left or somewhere else. Right now we use a camera view to determine block position just because we don't have any better input device for giving directions. It is a weak point of melee games and not something to build core mechanics around IMO.

Right now the meta is to trick your opponent with unclear timings using feints/morphs/drags/accels and other mechanics, which results in combat flow that looks strange and clunky compared to some HEMA videos or something. I can agree with that though that's not a major problem for me as I am generally satisfied with the gameplay. With directional system, the meta will be to trick your opponent with unclear weapon position. Does someone really think that that will look any better?

Right now it may not feel good to get caught by a drag or a feint, yet you can clearly tell that the moment you pressed the block button you saw the block animation, which ended before you got hit. Then you can obviously argue about whether such drags/feints/accels are fair, but at least your personal mistake is clear. With directional system, you press the block button, see the block animation, and still take a hit, although your opponent's weapon was visible. What is the usual explanation of that from the perspective of a player? Lag, some sort of mechanic abuse or cheats. Not because it is bad or unfair by itself, but because it looks exactly like those. That's straight up bad game design.

I still remember my MAA games on public duelyards, where a few 20 to 30 level noobs (the majority of the playerbase) were talking shit about the game and calling me out for using "unlockable strikes". After a long explanation and some practice, they learned how to block sidestabs (turning 90 degrees sideways, wow) and waterfalls, at least when I was doing them from the known side. Yet their opinion about this directional strikes stayed negative.

Also, the ability to bypass the block provokes people to do oblique attacks with the risk of a miss, which will increase their average number per battle and nerf all weapons that cant CFTP. What about 1vX? Not that those will be unsolvable problems, but I just want to say that with such system, devs would have to change a lot of already established mechanics and basically the whole game has to be played differently to fit in directional system. Not to mention the fact that if the camera position becomes the basis of the gameplay, people with higher ping will have even more problems, as potentially the difference between the block, the hit, and the miss will be the difference between several pixels/milliseconds.

You can play as a neutral on skirmish maps if you switch to spec right before the round start. 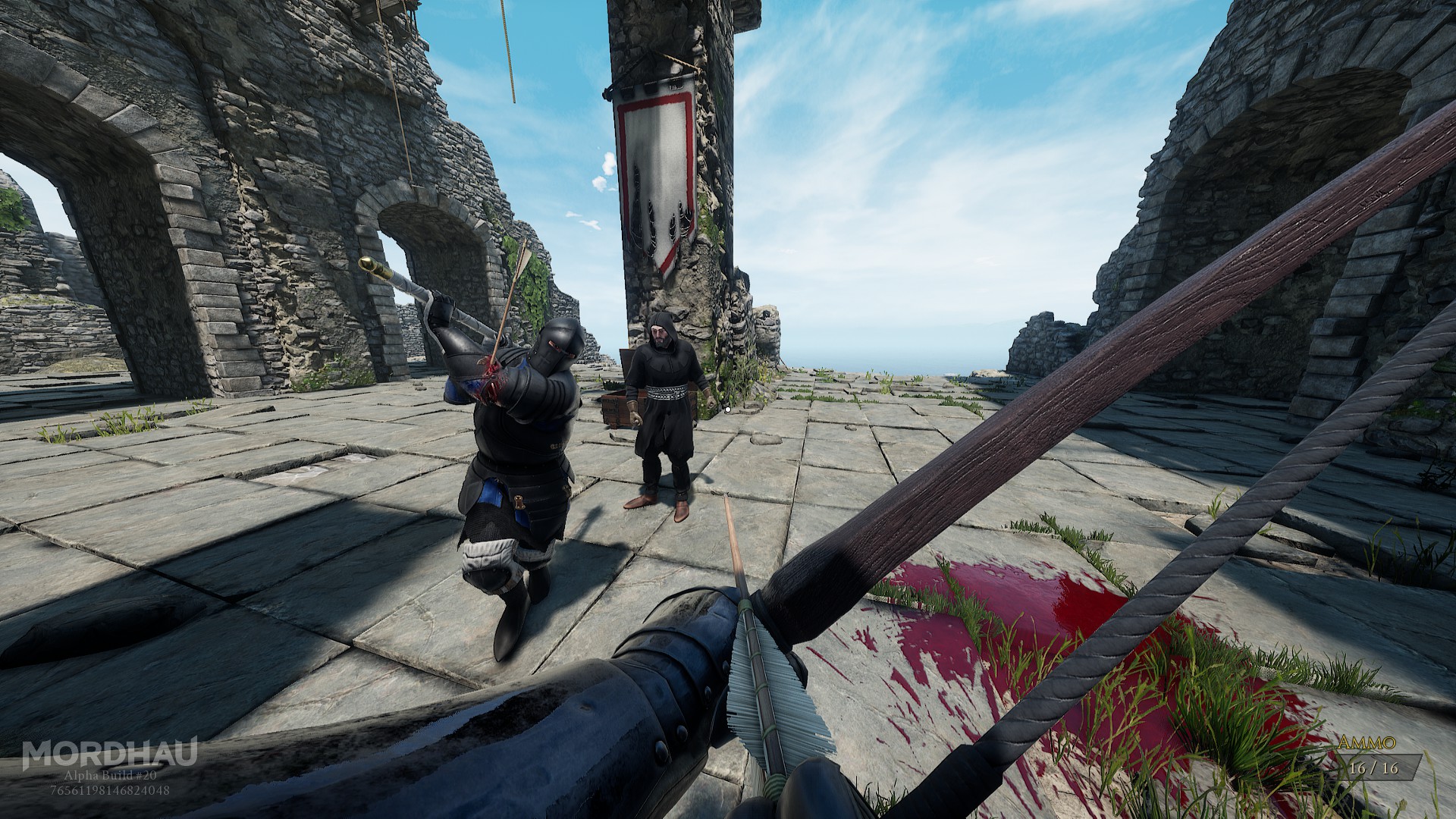 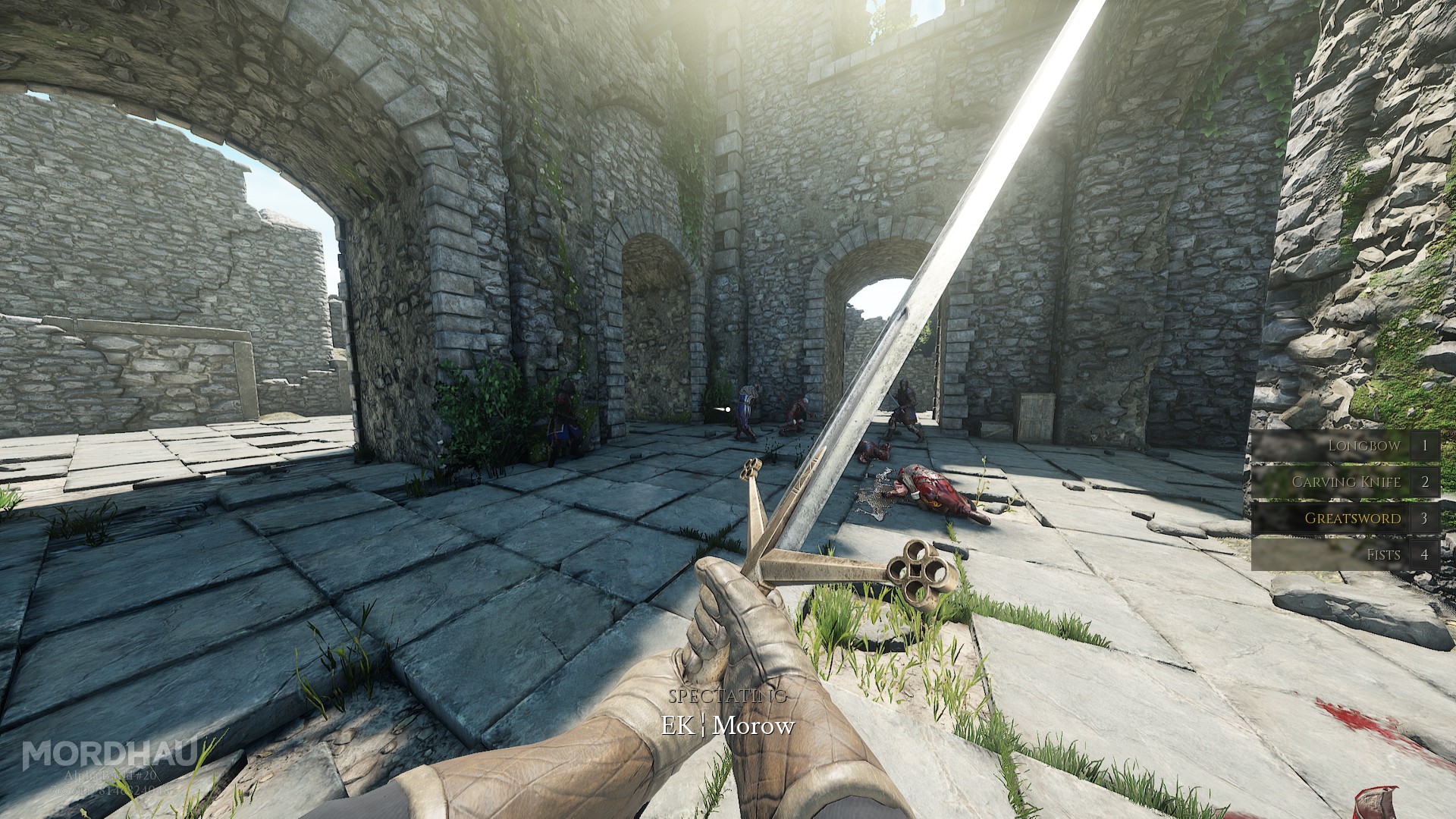 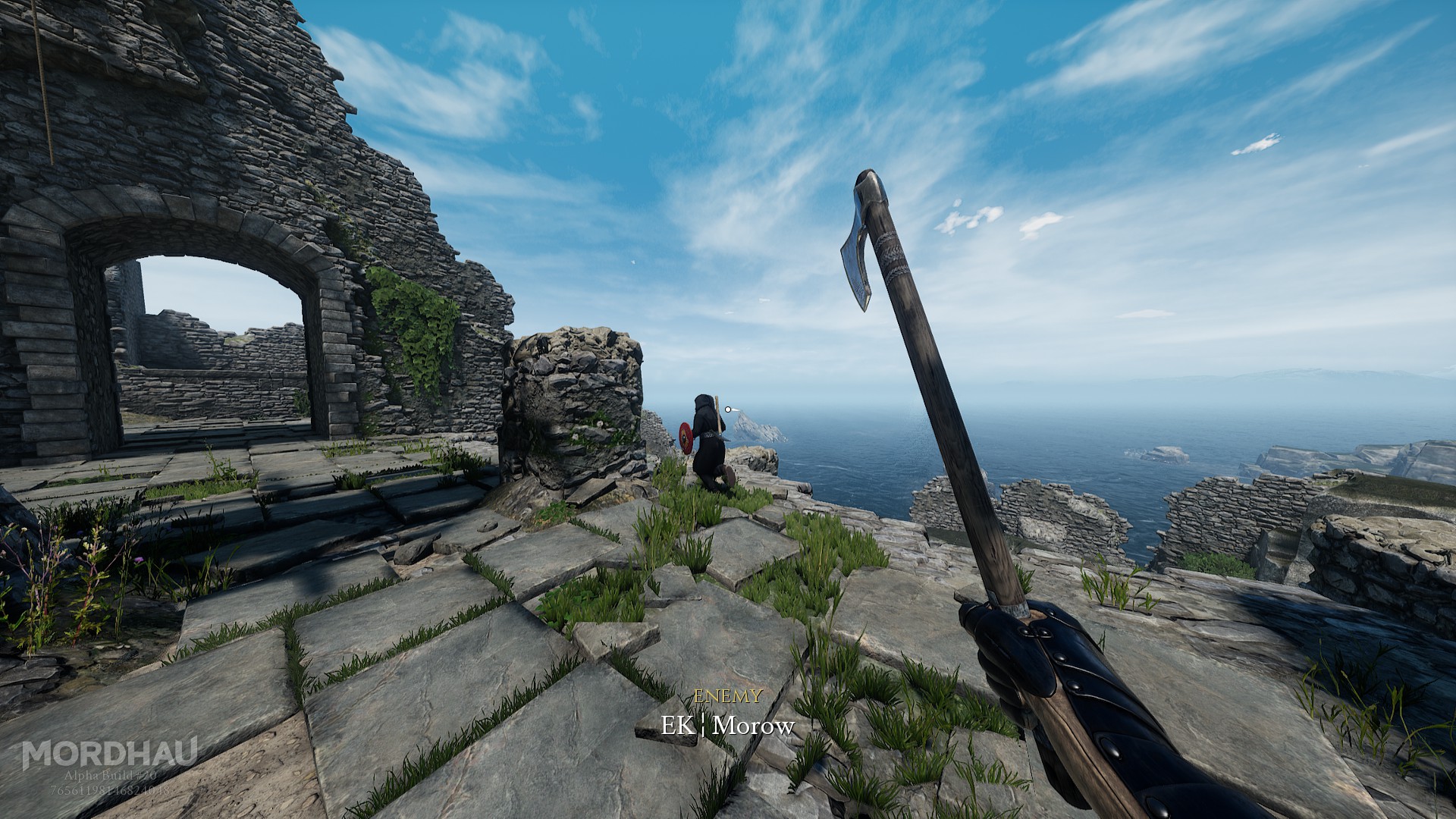 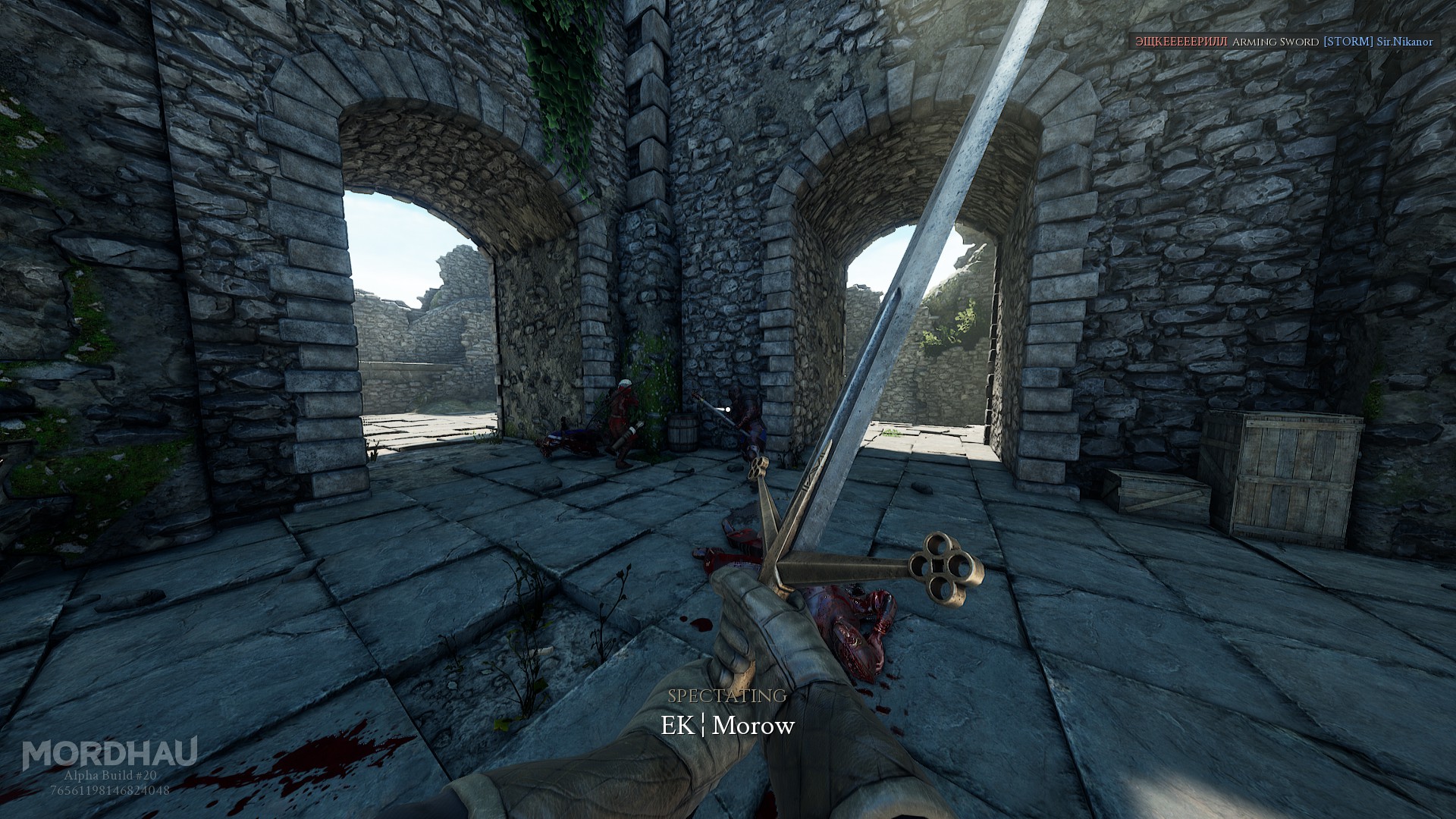 I don't like current shields, but what's up with this video? Two players playing very passive and letting each other fully regen their stamina, prolonging the duel. What this should represent?

There is no unique advantage, 5-10 degree attack angle difference matters nothing when you start considering other factors like timing and positioning. As you said, the directional play is almost nonexistent. If there a was a superior to default angle that could potentially let to misleading attack tracer or some shit everyone would just bind it, even the players who prefer directional input (if you think there are, show them). There are obvious disadvantages no matter how comfortable you are simply because your input overlaps with other important actions like body movement and tracer positioning that you need to do at the same time. For me, the most important one is trying to do a right attack angle while you are trying to catch a riposte in a 1vX. Maybe you could master instant pixel-perfect inputs for all 234 secret additional directions after like 10000 hours I guess, would love to see that.

The reason to keep this scheme is that it's much easier to understand compared to binds which are probably also 2-button binds for alternative attacks. It's intuitive and other popular games like For Honor and M&B have a similar control scheme (though they have a number of fixed directions). Now If you remove the additional attacks, an actual major disadvantage of a 240-degree system will arise - inaccuracy. Suddenly a 3-degree shift becomes a completely different attack you didn't want to do, right now thanks to procedural attacks it's completely smoothed out. This will make probably the main input mode for most people on the release actually inferior to binds, which will incline the game towards being a niche product for the small elitist community even more. The 240-degree system is also essential for lute and other perspective new mechanics.
Different degrees of freedom with different control schemes is not a new story, controllers have joysticks that allow regulating your movement more precisely, especially in many isometric games where keyboard leaves you with only 8 directions at max.

The real situation right now is that new interesting control scheme that allows to lift off some previous input restrictions for at least more visual concord between what you press and what you see for all players gets bullied by tryhard minority, because they are paranoid it can potentially be somehow abused by themselves using their own artificial control system.

Greatsword parry drain negation is 20, according to its stat table in the weapons menu, which is not true, right?

Well chambering an attack before morph window is over is a mistake and stamina loss for FTP is a reasonable punishment for you. Why should you "punish" morphs anyway? They cost stamina so just by blocking and riposting you are gaining stamina advantage. Feints should be punishable because you can spam them, but you can't do 2 morphs in a row without making a window for your opponent, so what's the problem?

I think that the only controversial thing here is the stamina cost of morphs or rather the overall state of stamina warfare. I recently played Chivalry again and I was amazed at how easy it is to take advantage of stamina difference compared to Mordhau. Stamina starts regenerating too quickly for my taste and I think devs should make it have the same timing as current health regeneration.

Throwing axes with huntsman deal only 80 damage to naked legs.