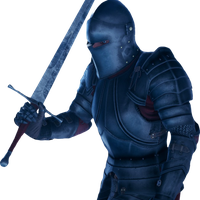 I just want to say, this is by far the best thread on the forums, good job Lazy! :) Also here is a happy and fat platypus. 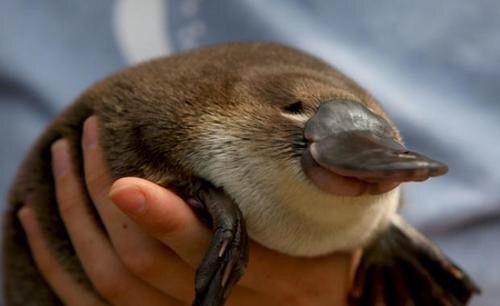 And why stop at wahmen? Surely we need a few trannies, n1gs, and disabled people which surely all existed during the medieval warfare period, innit?

My favorite part of this (pointless outrage, insanity, and the comments about transgender people and n1gs aside) is that the commenter doesn't think disabled people existed during the "medieval warfare period". I mean what do you even say to that tbh? I cannot imagine getting this worked up over something so pointless. People want more customization so the devs give us more customization that's the end of it. I also have no idea where people got the idea that Mordhau is "a realistic medieval combat sim" but for some reason I see that a lot.

@rob_owner said:
i played chiv a few nights ago, if you people really want i can probably compile clips of bad animations from chiv even though i already made a montage a while ago. If I then do the same for Mordhau, surly one will appear to look worse, but even then, it may just be a matter of preference for some people, just like how some guys like sopping vaginas and others like raging cocks, and some dont like either, while others may partake of both.

I realized how spoiled I was when a 140 ping messer knight not only had an easier time hit trading me, but had more range on all of their attacks because of their high ping. Every time I got backswung I thought "Oh yea backswings exist". I killed him by stabbing a lot, i'd see his parry go up, and then he'd take damage, and sometimes i pressed Q, crazy. I also at a point thought the chivalry animations were, at the very least, more distinct. (Now I think it was the 4k hours of chiv against the 400 hours of mord talking.) When a parry happens, you instantly snap to idle animation. That sounds good right? Oh whats that? The idle animation looks like riposte animation most of the times? And on 2handed swords you just need to sprint to make it look extremely similar to stab windup? And for 1handers you just need to stare at the floor? And for halberd you just gently sprint at them? Isnt it crazy how thats never getting changed, and this strat exists to a degree in mordhau, and i've reported it, and its getting toned down. I remember that night I played chiv, 3 nights to this day, I saw an overhead riposte. It came up over the enemy head, I looked at it with my own two eyes, and yes, I pressed of the right mouse button. My arms moved, they moved to a parry, and then I died. Even in chivalry, I can tell when it goes around, and I can tell when it doesnt. When you parry and have no turncap, your parry is desyncing and it wont work if someone hits it. When you see an enemy go through recovery animation from idle, it may mean they were parrying on their screen and if you hit them, they would just eat the hit because their parry isnt working.

Someone else could probably make this exact thread except instead of showing off bad anims they can show off how the parry spoils you. (high ping seems to, for the most part, make your inputs not work as often) You can parry so late, the only server with people gives me 80 ping and im amazed sometimes when I read or parry something, so much so that I nearly climax the times I play on 40-50 ping and parry. I rarely see parry go up and not work unless I can tell something went around or over. I can probably find a video showing off what the chiv equivalent of this is

If you look at the player model when its dead, you can actually tell when the enemy hit around the parry. Totally obvious if its something you pay attention to, and if you want to avoid that, you just need to move as if youre trying to incur the enemy backswinging your parry, you also have to flickshot the camera at the sky either during or before parry, theres no vertical turncap. If you want to be badass, you could try to aim at the tip of their weapon, sometimes it might pass through you and you'll ass parry, but in chiv, whatever side a weapon's stab comes from is actually less able to parry. I can record footage of that for you, its pretty funny. Its also why I wouldnt recommend smaller parrybox where you can move your arms around it when you appear to be on the person's screen, it usually does not look good. Maybe laxer turncap for parry in combination with it would be fine.

At any rate, there is no "red parry" and parry works even less on 80 ping. If there were no backswings, people would just maximize the abuse you can do with just ordinary lookdown accels and delay/acceled riposte since riposte window is so massive in chiv and the later/earlier you do it the later/earlier your attack will come out, and since the game is fundamentally a maggot filled turd, it would still be atrocious, not to mention the feints which are hilarious and never going to be changed. Those comp mod boys are doing the best they can.

We had to tone down handlehits on swords when we first made mercs. If you play vanilla and go longsword, you can literally put the windup inside the enemy head, crouch last second, and its going to be like a 1hander attack. You counter it by staring at the sky so they cant headshot you, and even then you can probably get away with microfeinting it or floating the enemy with it or just fucking backswinging them. Wizardish was the first nerd to start spamming lookdowns with longsword, and everyone thought he was a hacker because he was pretty much a noob. No one thought the game was as brainless and broken as just doing one accel over and over (i guess the people that wrote the bad reviews did) but you could totally make a playstyle out of that, for duels at least.The duels just going to be a tug of war for trying to get in the enemy face first and doing one of the many unreadable treats and not getting gambled because after a while you'll likely never actually mess up, accidentally doing a readable mixup.

Theres arguably some unreadable shit in mordhau at the moment. I reported it. Its going to be changed, and if its not enough, i'll keep reporting it and also probably finding more.

I dont know how many hours the people who prefer chiv animations have or what their environment to that conclusion was. If you scrape away all the bugs, and if youre not inexperienced, you actually have to play nice on purpose if you want the game to look as good as it can. Even then, it still looks rough, and it will never get any better.

Keep on being you Rob. Your testing and feedback is honestly invaluable and please feel free to hit me up whenever you want to test something, I greatly enjoyed the last time. I'm not a chiv vet myself but I must say it is really nice to see the devs working to improve the game versus everything I have heard about chivalry. All your posts are very enjoyable or very informative and please keep up the good work man!

I don't much care for all the drama surrounding this situation but I feel no sympathy for Lazy. He literally spends his time trying to make everyone as miserable as possible, honestly I can't think of something more pathetic (and not in the invoking sympathy sense) than spending your time actively trying to be as much of an ignorant asshole as possible in a game of all things, it's legitimately laughable in my opinion. He was clearly trying his absolute best to get banned and congratulations he did it. Anyone arguing he wasn't warned enough has to be out of their mind, yeah I'm sure he had no idea that acting like racist garbage was something he wasn't supposed to do, what a terrible argument. You are telling me because no one explicitly told him not to act like that, it's somehow the developers fault? If he acted like he does in game in real life he would be hated by everyone, luckily he can hide behind his internet anonymity. You cannot be upset when a guy who spends his time trying desperately to be banned, eventually gets banned. Unfortunately it doesn't even matter because he can play the game anyway since I still see him frequently on private servers. I say good riddance, the devs had every right to ban him. I mean come on, is it really that difficult to act like a remotely decent human being? 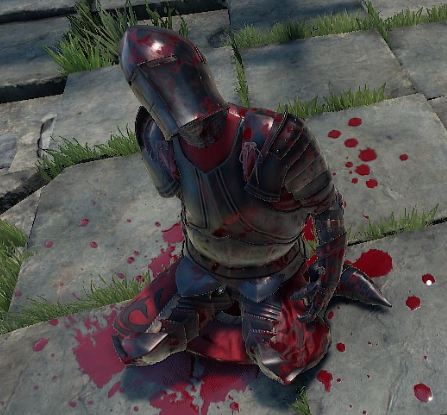 Is that you?!
Yeah, probably after you killed me for the hundredth time. :P

It's MonoXtr in game. I play against you pretty often. Just thought it was funny I recognized my corpse.

Is that you?!
Yeah, probably after you killed me for the hundredth time. :P

Yeah internet was slower than I thought. 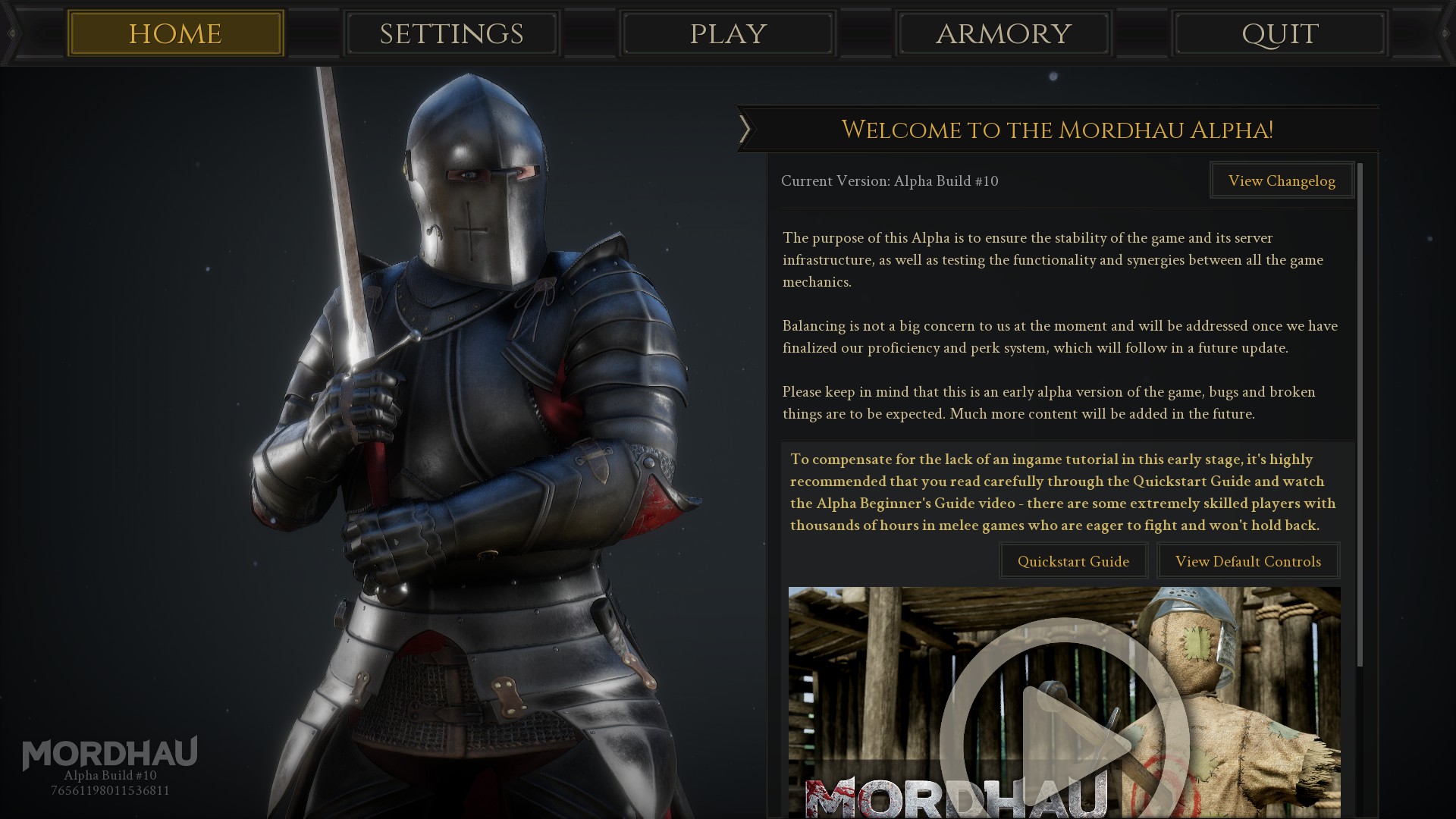 I am genuinely not sure whether this is a bug or some weird thing with my ethernet but I figured I would list it just in case. Randomly during a match I will get disconnected from the server and sent back to the main menu with an error message that says "connection has timed out". My internet is perfectly stable so it isn't just cutting out momentarily. This may have to do with alt tabbing but I have not noticed any direct correlation.

Update on the flickering problem: I fixed the issue by going to Nvidia Control Panel-Change Resolution-Then check the "Use Nvidia Color Settings" box and make sure it is set to 32 bit. I hope this helps others with the problem.

I also have the flashing green seizure inducing problem. It only happened recently and after I updated the nvidia drivers so I also suspect it might be the new driver.

I am one of those few rookies in the Mordhau alpha right now. I have a whopping 14 hours on Chivalry and now about 83 on Mordhau. I mostly heard about this game because I love medieval games and RPGs (although mordhau doesn't really fall in that category) but so far I am loving it! The combat is so reactive and engaging and even though I suck I still have a lot fun and am slowly getting better. I totally get where you are coming from though as it can be really frustrating being murdered over and over by chiv vets that are way more skilled and way more experienced than you. However, I am glad I stuck with it because while it can be frustrating I am having a blast! I have always loved games with good melee combat and Mordhau really strikes a chord with me. I am very excited for the future of this game and I hope to be fairly decent eventually.