@Lionheart Chevalier said:
To be fair though, isn't longsword a little too good at slashing now? Ever since it's speed buff I've brainlessly spammed horizontal slashes through frontline and invasion and it may as well be a messer... especially now that messer no longer two shots T3 head. And in duels I just spam accels and accel feints with token drags... I rarely risk a stab since it may miss or be chambered and give my opponent the chance to chamber morph/feint.

I think Longsword needs a slight tweak so it needs at least a head shot or a stab for 3htk T3.

To my understanding its thrust speed is the only thing that got buffed (according to the patch notes) but I could be wrong. The patch feels off in some ways other than what is listed for sure.

Looking down is how you accel... so you complain about accels twice. Then you admit you cant beat a maul 1v1.

@SWSeriousMike said:
I think especially the focus on 1vX is hurting the game. The latest hyper-armor is once again a game mechanic hidden in patch notes. I would have prioritized consistency over 1vX and enabling of noob-stomping. But I'm not a game dev so what do I know?

1vX is one of the most fun parts of the game. Its a skill that people strive to develop, it keeps people playing. Thats why hitstop removal was such a joke. Some person charging up with a zwei and intentionally swinging through multiple teammate was borderline unreadable, and in itself a brain-dead move that should never be rewarded.

@EatAtRedLobster said:
You'll have to try harder than that son.

Most people's suggestions are dogshit. I'm guessing yours are the same. Dont act like youre the bastion of common sense.

@EatAtRedLobster said:
while ignoring nearly 2 years of common sense suggestions which could be easily implemented within a week...

To be a shitpost in the form of a 3d action game.

This game isnt a simulation. It's an action game.

What is this abomination ?

if you outplay your opponent you can almost always beat them regardless of weapon choice, that's the beautiful thing about this genre

I love the dark souls reference.

My bad homie. What do you recommend ? 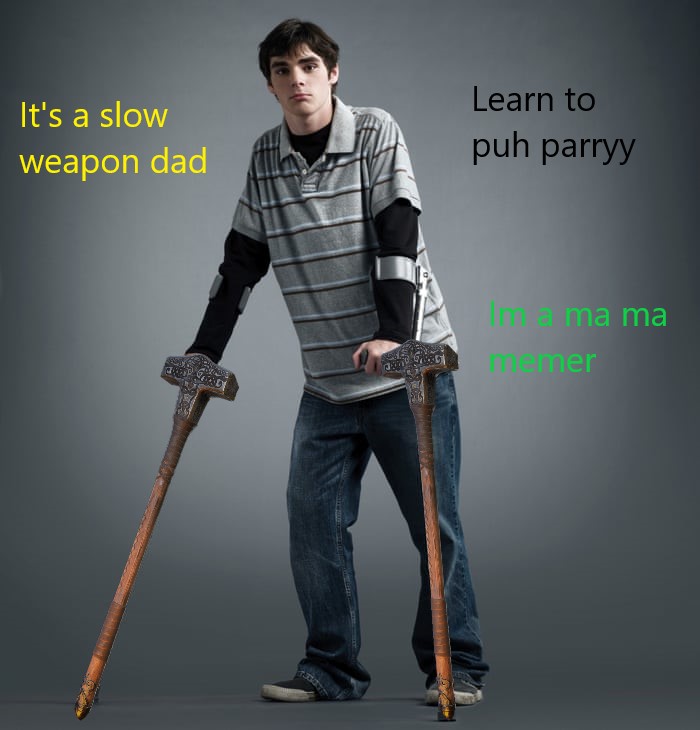 @Bmufumac said:
LMFAO cry more rangelet. Recurve+huntsman is 7 points, leaving you 9 points to make a half-decent build and still oneshot most archers with a spammy bow.

Imagine not getting headshots lmao

Imagine being garbage at bow but acting like you only land headshots in forums.

This guy is completely on-point honestly. The house is way too secure. Most people dont even use it anymore out of pure manners.

ONE engineer can hold back the entire team. Putting such a defensible position in any game has always been a bad idea... let alone in a game where you can build walls.

@Bmufumac said:
LMFAO cry more rangelet. Recurve+huntsman is 7 points, leaving you 9 points to make a half-decent build and still oneshot most archers with a spammy bow.

@xXLuxXx said:
At the end of the day its still their cash. They can spend it how they want.

Sure.
But would you buy a product of already questionable quality when you already know that the seller has very little interest and motivation in fixing and improving his product?

They've been releasing patches since I bought the game. Its far from vaporware. I have 1100 hours in the game, can't really say i'm disappointed personally.

@xXLuxXx said:
30 million is jack shit. Triple A companies accidently shit that much out before they even make it to the toilet.

We already had this discussion multiple times. Conclusion was that they should have more than enough cash to noticeably improve and speed up things - and that could be done on various ways and with varying costs.

At the end of the day its still their cash. They can spend it how they want.

@MachinePlayer said:
They really haven't explained why they haven't expanded their dev team, chivalry 2 will probably drain a lot of the playerbase as the alpha maps look superior in every way.

Because they are indie devs and developers are expensive?

Well the game has sold over a million copies. How you can't hire a couple more programmers is beyond me.

So 30 million dollars? Can fully expect that to be cut in half, if not more with taxes.

Doesnt even account for sale prices. I've seen the game as low as 20 bucks.

This shows they have a staff of about 20 people... You probably had many people living off saving during development and fully deserving of their cut. I could easily see millions+ going to certain people with lots of sweat equity in the game.

28 million in sales
14 million or so after taxes
6-8 million left after people that took all the risk get paid.
4-6 million after everyone else gets paid.

Then you have expenses... hardware, licenses for software, rent, ect...

30 million is jack shit. Triple A companies accidently shit that much out before they even make it to the toilet.

So ya, i personally wouldn't be too forthcoming to put my cut forward to pay some developers 100K a year when the game is already an indie success.