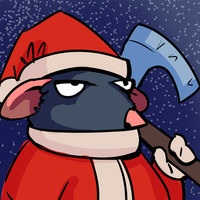 Unironically tho proper switch to ftp might give the game a new wave of new players, it might be not a bad idea maybe a few years down the line

You should just have been born in a wealthier family, the fuck is so hard about that?

Unironically I think the game needs more noob appeal, new people see the isoteric shit we all are used to and go full what the fuck mode.

I've been thinking, would it be possible to convert current swing manipulation into something that looks and feels, intuitively, as an intended mechanic, while not losing too much of the skill ceiling at the same time? The obvious idea would be a held attack delay with a limit al-la mount & blade but its quite shit.

I had a weird idea for a swing manipulation system with a dynamic animation thing but you'd have to see how it looks to say if its good, and I have no idea if its doable at all

@Humble Staff said:
I collect body parts ¿Is that wrong?

are they legally acquired?

vote for me and I will ban death

under threat of capital punishment, no less

tell them i hate them please

@TheKingInTheNorth said:
When occasionally pressing lmb between scrolling up takes up so much brainpower that you forget about the existence of periods and capital letters.

but i dont use rapier

@Jax said:
Patch with Feitoria is soon. I'd love to give a timeframe but it's not something that we can know until a few days in advance really. We aren't taking the money and running, we're in this for the long haul.

Feitoria will come before Castello, as they're at different stages of production. Other unannounced maps are also in the works but heavily WIP at this stage as well

are you saying its not coming in two days D:

@DangerCat said:
Or better yet, the horse tramples them and they die.

or even betterer remove horse

@ToLazy4Name said:
It's only partially a hobby, the main thing is that guns are useful tools and marksmanship is a useful skill.

It's mostly a hobby, especially if we're talking about whole collections.
Or, in case of Murrica people, it's just a weird conviction.

honestly if i was a mordy dev id have burned out long ago and proceeded to hang myself, or something edgy like that

I don't even have these

and here are the pictures of my pets

i just got to read the month-old first page of this thread and I have problems with the op's opinions, particularly this one

@CocyxTheGaySkeleton said:
jojo is cool because of how gay it is & also has hot monster men designs. too bad i can't watch it cause it's insufferable anime garbage

you deserved your ban you literal bone head. me no like you no more

What's with all the plume hate