@TyraxLightning said:
Many thanks for the info Devs!

Also, I know full well gal warriors in Medieval Times weren't common, but surely they didn't just not exist either. Surely Norse Legend Valkyries didn't just video game style promote into Valkyries from the Base Class of 'didn't do a damn thing violent gals who stayed at home & just cooked, cleaned, & did laundry'... That can't compute with me.

I bet Sparta Women would be amazed to know that they & their tomboyish ways never existed & they just hallucinated it the whole time... Oh, & Amazon Warriors say "Hi!"...

The Irish & Celts were known to have strong gals in their time as well... especially when those gals were Redheads. (<3 Redhead Gals <3)

There might have been very very rare Female Samurai in Japan... also there were enough Female Ninjas in ancient times that they had a special designation to themselves... "Kunoichi".

Also, France... who here has heard of the legend of "Joan of Arc"? (Who if I remember right went into battle in Heavy Armor...)

So... what was that that the voice of Chauvinist Pigs were saying about Gals being incapable of belonging on a Medieval Battlefield...? In my Shamelessly Biased Opinion, Gender Inequality is Bullshit. I rest my case.

Lastly, this Game is the Dev's game & they can do what they wish with it, including deciding how they wanna bring Gals into the fray & how so... & I will abide by it & work within the parameters they grant us. With that said, I can't help but to hope I can inspire your imaginations with some ideas for future Gal Characters i'd enjoy playing in this game... in no particular order:

2: Keira Knightley Character in King Arthur Movie inspired Female Archer. (If she wants to die everytime an Enemy Arrow finds her naked belly, she's responsible for the consequences of her choices, Truth in Television. )

3: Exiled Female Japanese Katana Wielder Mercenary. (If I remember right, in Medieval Times, Gals who were caught wielding a Katana were killed for daring to wield such a supposedly 'sacred' weapon while being gals instead of guys... I envision the Roleplay that my Gal said "Bleep YOU!!!" to that sexist unjust rule & trained to awesome proficiency at the Katana, but was eventually discovered & fled her Homeland to escape Execution & self-Banished vowing never to return, she traveled West all the way to Europe & makes her living as a Mercenary for Hire to make ends meet & keep herself fed & such.)

4: How can I not make a Joan of Arc inspired Character... aka a Heavy Armor Female...?

P.S. Ya chauvinist pigs would already have a way to 'argue' against Gal Characters... it's called... "Your Weapons". Peeps like me who think Gender Inequality is Bullshit also have a way to 'counter-argue' as well, yep, ya guessed it... our Weapons! One of the major causes of Battle & Conflict was disagreement & non-acceptance of Ideals not one's own... Mordhau can embrace this as a additional component for Fun Factor!

What has happened to this place

Hello, I'm running an EU academy - it's a serious crash course which aims at getting players up to alpha player standards in as short time as possible. You will be directly trained by some of the best players in the game.

If you don't know me already i'm an alpha player and also a 5k hour competitive Chivalry: Medieval Warfare Veteran 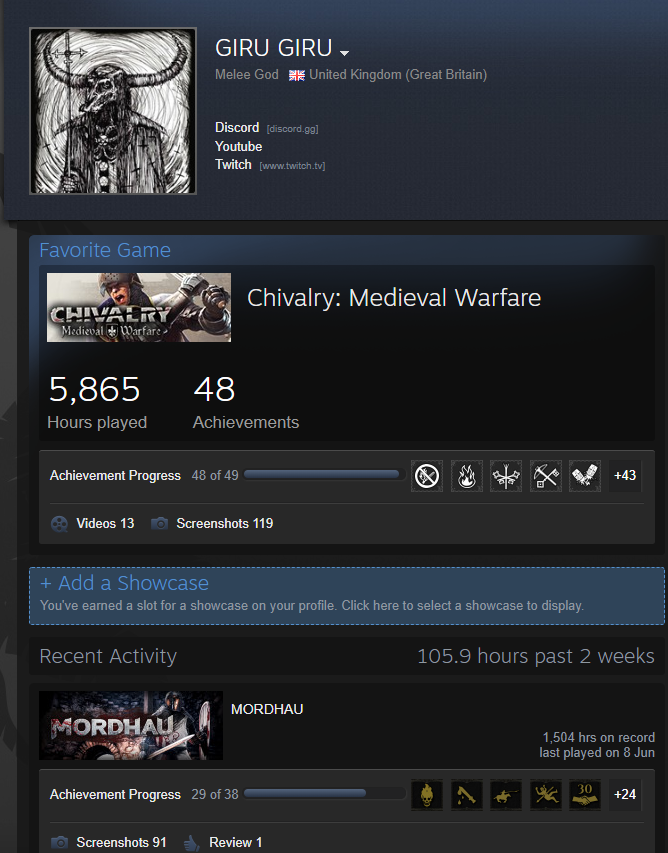 Signups close in 1 week, trials will begin shortly after - if you are interested the signups are here https://docs.google.com/forms/d/1hgq2JEF-jn98RKYkBWKOnOaQsypzZDTPxEaftKFgLqg/viewform?edit_requested=true

230 applications have been entered thus far, and there are 12 positions - we're not looking for "amazing" players, we're looking for people with the drive and dedication to make it through the academy and soak up as much of it as possible. If you are not EU or don't manage to make it in, every session will be livestreamed and then uploaded to YouTube, so everyone benefits from this.

This is completely free, i'm giving up my own time to run this. After the academy, you are completely free - there are no hidden strings attached or any contracts or anything like that. The aim is to grow the competitive scene and nothing else.

If you want to talk to me personally, i'm best at responding on Discord; GIRU GIRU#1337

This was added maybe over a year ago in alpha when lunge was much more than what it is now, it stopped people flying around swinging in combat

I'm not sure if it's neccesary anymore as a mechanic, but it does punish people for being stupid

The only problem with rapier is that it's really shit, new players will pickup far more kills with big weapons - no need to get so emotional, friend.

@greatnessincarnate is correct, rapier is vastly outclassed by other weapons. It's short, has shit damage, some of the worst strikes in the game, tiny stab release and no stamina game

The rapier windup is 475ms, if you're not able to react to that looks like your reaction time is twice as slow as an average human - that might be your issue

what ? it's the total opposite lmfao

Crush's strength is game design. Fine tuning values and balance not so much because he's not playing comp at a top level where he can accurately see weapon viability and power

That's not to say he can't do it, mercs mod is proof of that. He's just not playing competitively so he doesn't have that perspective, and there's no pro play stats that he can look at to fine tune off of as well

@AzorAhype said:
dont think you can call something that high level when 98% of people havent even laid a finger on the game yet. about a month after launch i bet there will be fresh players that already dumpster people that tested

Agreed, and I'm waiting patiently for the new talent to come in

However, it will take a decent amount of time for the new talent to catch up with years of melee slasher exp. The reason why this is high level is because this is the sweatiest lobby the game can offer rn

watch from about 22min for the actual games, these are all top tier players with years of experience. This isn't intended to show how good i am, i die alot and i lose alot of games. It's just supposed to be raw gameplay footage with no cherry picking or ego inflation

hopefully this footage will alleviate some of the confusion regarding the mechanics and how they should be used, and the "unreadability" of things

But this is all just appealing to the male fantasy. Disgusting !

When did u become such an egoboy, what are these screens

I think you underestimate what you're trying to pull off here

It's good to show the difference between competitive and none competitive players, but I wouldn't call this high level play as mittsies stated

the game needs a villain

Edit: not really much to say about that video. Triggered SJW gets fired over inability to control sperging

I don't represent triternion nor am I an employee so it's really a comparison to me. I don't meme around at work like I do here because I know how to be professional and not spaz out like this sjw employee did