I still believe that several weapons DO need changing to their turncaps and animations but again, the rest of the combat is great. The fact of the matter is that people with always find a way to play the game optimally at higher levels, and in this case, optimally is using weapon animations and good bodyfeinting to win fights. Complaining that people are using the systems and mechanics given to them is dumb.

By that logic, someone using an a glitch within a game is perfectly legit as it is part of the "system and mechanics given to them"
We need to figure out WHAT kinda sword fighting game this game INTENDS to be and reinforce such gameplay, lest it end up like Chivalry.

Unlike chiv, Triternion hasn't tried to sweep attack manipulation under the rug. They specifically designed the game around being able to manipulate your attacks with mouse movement and footwork. Again, I'm not saying the game's weapon balance is perfect. It's far from it. More then a few weapons need to be rebalanced before we even begin to start talking about how "mordhau is turning into chivalry"

@qbmax said:
Does anyone know if ranked is going to be exclusively 1v1's because I remember their kickstarter goal saying that ranked will include 1v1's 2v2's and 3v3's.

Source on 3v3 and 5v5 for this coming update? I don't remember seeing that anywhere.

it was one of their kickstarter stretch goals for adding ranked

"We will add a ranked mode with 1v1, 3v3 and 5v5 modes where players can climb up the competitive ladderr" or something to that effect

I still believe that several weapons DO need changing to their turncaps and animations but again, the rest of the combat is great. The fact of the matter is that people with always find a way to play the game optimally at higher levels, and in this case, optimally is using weapon animations and good bodyfeinting to win fights. Complaining that people are using the systems and mechanics given to them is dumb.

@Zeratul said:
I like: The game. Its a great game.
I dislike: The direction the devs MIGHT take the game. Their last official statement gave me worries, but im still counting on them to do the right thing, that means to not destroy the game, by adding females. I'm fine with other skin tones, if they add them in a believable fashion. Black people would not make any sense though, since its medieval times. But brown, arab would be OK in the right setting.

imagine watching a naked man with a face so fucked you can barely even tell its a face run up with nothing but a branch and a loincloth cave your head it, you respawn and kill half a dozen others before you duck down and regenerate all the damage you've taken. as you keep running you hear a man tell you "You sir, smell like something that was ejected from the backside of a diarrhetic horse!" followed by non-stop screaming, you laugh, look around and bask in the pure medieval fighting game immersion.

but then out of the corner of your eye, you see him, a black man. this cant do! your immersion has been absolutely shattered, you've been taken out of the time period and now you're back in your basement, sitting in front of your computer. you try desperately to reimmerse yourself, crying out in vain as you listen to a lutist play megalovania, but you just CAN'T get yourself immersed with that BLACK MAN staring at you.

your eyes brimming with tears, your body shaking with rage your hands dip back into the cheeto bowl and you begin to eat. "soon they will pay. yes they shall pay indeed. i shall show them true fear" and then all is quiet

i like: (most) of the combat, excellent customization, and voice lines

i dislike: the community, the maps, and slowness of development updates and the updates themselves

Does anyone know if ranked is going to be exclusively 1v1's because I remember their kickstarter goal saying that ranked will include 1v1's 2v2's and 3v3's.

edit: thank you for making me post the same thing twice mordhau forums

Mordhau isn't nearly as bad as Chivalry was with this sort of stuff but I do still believe that it's an intrinsic issue with higher-level play as a whole. I guess I can't fault people for playing optimally but the fact that weapons like the Eveningstar are literally banned in some competitive tournaments is REALLY telling of what it's like. More than a couple of weapons, when combined with advanced tech like jpeg accels and wrist drags, are stupid strong and almost certainly need nerfs. While people spazzing out BEFORE actually attacking (and thus being turncapped) does look stupid, it's pretty easily counterable imo because the person spinning super fast basically has no vision of you so you can gamble or even sprint up to them and kick while they're trying to throw you off.

Triternion has said that they're looking into swing manipulation as well in their recent blog post.

"We’re also looking into making swing manipulation look better overall without compromising the skill of the game, and adjusting a few weapons turn caps which are a bit too extreme at the moment (For example, Spear in short grip), making the game a bit more grounded. There will be many more adjustments and improvements, including Javelins among other things, to help fine-tune the already amazing combat."

Adjustment's I'd personally like to see are improvements to how swing manipulation looks as a whole. Even in its current state, it's miles better then what Chivalrys was but I still feel that a lot of higher-level techs when used properly push the game that much closer to Chivalry. Crouching definitely needs some fixes right now as well, I've seen more then a couple of clips of people just tapping their crouch button and instantly avoiding hits.

I still have high hopes for how higher level Mordhau play will look in comp but I'm going to be sorely dissapointed in this new patch if there's little to no weapon balancing done.

game just isnt optimized for higher player counts, they really need to change the recommended and minimum specs on the steam store because theres no way they'd run frontline good

Somethings fucky here and I've been saying it for weeks. Not only is ping completely disgusting on most servers, but FPS on most maps is also completely awful, especially on frontline. I've tried to give the benefit of the doubt here and I was hoping patch 7 would be a saving grace that would make the game playable again but instead we got a half-baked map and some poorly thought out weapons. Removing this from my steam library until it's actually playable again tbh 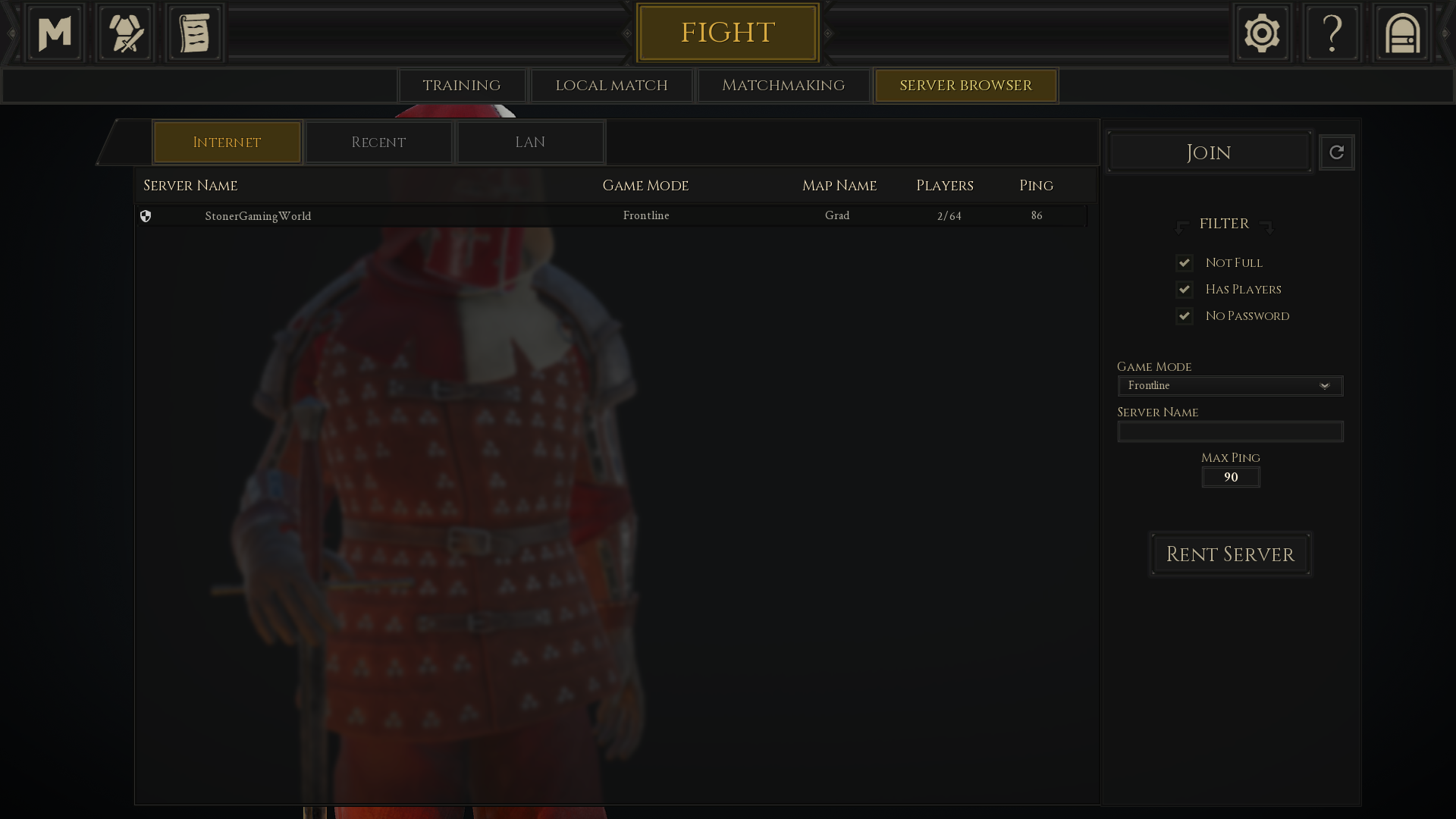 This is completely unacceptable and should not be the case. Not only does frontline run like complete liquid shit for me and many other players, but it's also near impossible to find a server under 90 ping regardless (not like it'll matter anyway because the pings listed on the browser are just wrong). I have no idea how you guys manage to make this game run worse and worse every patch but you do.

I'm putting this game down for now until it actually gets made playable. Alienating a good portion of your player base because you'd rather throw in some maps and weapons instead of actually making the game playable is hilarious. Hopefully, patch 8 will actually improve performance this time instead of making it even worse but I'm not getting my hopes up.

I have no idea how a game can go down the drain this quickly with its performance. Literally a month ago I was running mordhau on High settings with 80 fps, now on LOW settings, I'm lucky to break 60 on most maps. Fix the game, please.

haha i remember playing on this server one time

someone killed the owner kiyoh or whatever their name was

lol i played on this server and the owner votekicks anyone who beats him or just tries to interrupt their duels until they get fed up and defend themselves, then he votekicks them

frontline is completely unplayable, performance is decreasing with each patch

this is incredibly frustrating and i really hope that the next patch has performance fixes or i might have to put mordhau down until the game is actually playable.

@AleX said:
3Gb (GPU) is pretty light for UE4.
UE4 engine is really demanding (GPU and CPU).
Have you ever tried to reduce effects, foliage, shadows or post process ?

Frontline parties cause huge load (lots of players). Did you reduce other player textures ?

im running at medium-low for everything

i could run mordhau on high at 80-90 fps on release but each patch killed it more and more to the point where i get 30-40 fps on high, and sub 60 on low-medium

I'm running the newest drivers but I might try a rollback then. I've heard 425 something was the last stable version?

I really can't wrap my head around what's happening here and it's killing my drive to play the game at all. Continuous FPS drops, stutters and flickers have made it nearly impossible to play frontline and frontline exclusively, every other gamemdoe runs perfectly fine. What's even more frustrating is that frontline ran perfectly fine on release, whatever has been done through patches in the mean time has completely ruined performance for me. My CPU frequently hits 100% despite barely reaching 60 in any other game type and even when running the game as low as it can go graphic wise changes absolutely nothing.

I was expecting at least some optimizations or fixes from the last update but ended up disappointed. Are there any plans for fixing these issues or am I just stuck playing frontline at 40 fps?

same here, super annoying.
its pretty much impossible to get above 60 fps in frontline, every other gamemode runs fine
camp runs like trash for no reason

only started happening after the last patch, i dont want to have to make my game look like plastic just to get more then 60 fps, its stupid frustrating.