@Lord Commander Guts said:
to be fair modders that release in 1 month are mostly just duel maps. Triternion maps are much bigger in order to use for invasion/frontline. My map I built alone, only stopping to ask sr. modders questions such as blueprint questions and such. Put 140 hours over 4 months into it. Now they got 2 maps with I'm sure similar amount per maps, but with better results.

And modders with the help of TRITERNION were able to release the uSDK you are talking about. Do more research before you make such claims.

140 hours are not even a month of work. Developing this game is their profession now. They should start acting professional. Until they do people have every right to complain.
As it stands now, you accomplished more than them in your free time.

and to be fair, this is just shy of a months work. I'm sure the Mordhau devs might have other jobs too.

I bet the lead dev and his buddies don't have to work another day after all the money they just raked in.

How ever the rest of the devs are now probably if not already working for other companies.

They obviously didn't put any money into the game or the dev team.

This game doesn't even have proper servers so even without an update most of us can't even play the game as it is anyway. This has been the case since day one release and the devs and even the alpha backers did nothing but laugh at us and tell us it's our problem. I just played like 20 games over the last 2 months after uninstalling Mordhau and I've never encountered a single "high packet loss" "high latency" error. All you had to do was fix the fucking servers and you'd get over 50% of your player base back.

Tittyron or w/e there name is tried so hard to make this game stand out from Chivalry and tried to be different but all they really did is capitalize on there success, steal there ideas and revamped it with 2 new mechanics and called it "unique".

Chivalry 2 is going to take the biggest shit on this game and I am so glad. Even after all the bullshit Torn Banner pulled on the community we will still play there game because of how much of an embarrassment this game was.

I was about to install the game again and give it a whirl but I've no decided not to after reading there is still abnormal server packet loss.

It's hilarious cause all I wanted was to be able to play the game without fucking lagging constantly and have "High Ping" on my screen and I wouldn't have even come here. All you had to do was take about .0001% of the profit you made and buy real servers like every other video game but you can't even do that.

Now the moderators are insulting people in their forums.

You're the most unprofessional game creators i've ever seen lmao.

The game community respects Torn Banner more than you.

I see they released a patch before the end of August like one of there devs claimed, wow. I'm actually surprised.

What's not surprising is the obvious lack of effort and testing gone into said patch.

Servers have not been fixed.

People are asking for South American servers only to be not responded to and have the thread with related questions closed down.

Suspending people questioning what's happened with all the money that this company made.

Ah man this is hilarious.

You better actually do something in September or what's the fucking point? Just take the money and move on imo.

Bannerlord and Chivalry will shit on this product.

How do you make over 50 million dollars and not hire one more person to create content or open steam workshop?

I haven't seen a company fail this hard at making a game since Battlestate Games with Escape from Tarkov.

@Rergato said:
It's on your end. Do you use Wifi or ethernet cable?

Lol yeah it's his net bro. Has nothing to do with the game or the servers.

It's true. But I can have normal conversations as well.

@Antoniokontos said:
sneak you shoulder take this game that seriously

i don't, it's a fucking joke. along with the dev team.

@Rergato said:
It's on your end. Do you use Wifi or ethernet cable?

Lol yeah it's his net bro. Has nothing to do with the game or the servers.

Nah it's just your internet bro. It has nothing to do with the game. The developers of this game know exactly what they're doing and anything that is a problem with the game is actually on your side. The game's perfect, especially the servers. This is because I don't experience any lag or network issues cause I happen to be lucky enough to live within 2,000 miles of the servers. Hahahahahahaha it's your internet idiot. Not the game.

@SWSeriousMike said:
Yes. It was too balanced when it was released so they adjusted it to better fit their vision.
When Taiga was overhauled the game was lacking a completely one-sided shitshow map. Crossroads was made to fill that void. And I have to say they outdid themselves with it.

Way to make shit hole development seem like it was done on purpose.
Man you boot lickers are amazing at coming up with bullshit.

get off your arse

@ZugZugNeverEnds said:
some team deathmatch servers would certainly help... yesterday i logged on, and i swear to god, every single map on all frontline servers were crossroads, except for 1-2 mountain peaks...

at this point i am convinced people are just troll-voting for crossroads to piss as many people off as possible... then switch server and rinse repeat all day long until every server is a crossroads server... call me a tinfoiler, but it seems super organized... and don't even get me started on in-game troll groups of people blocking spawns and deliberately ballista-necking their teammates.

Good.
Maybe when the games dead the developers will get back to fucking work again.

@wierHL said:
Are you sure the servers you go on are even located in Sidney? Another server issue with this game is some of them are labeled wrong. According to Gambit 36 US servers are labeled Sidney.
15 ms of processing doesn't sound that bad for a server but could probably be better idk.
I'm not saying your internet is to blame (though Australia is kinda notorious for low capacity internet because supposedly you guys are still using copper instead of optic fibre in homes).
I'm saying incorrect server lables may be tricking you into connecting to US servers instead of Sidney servers. That would explain why your pic says a Sidney server is over 15000 km away while you're in West-AUS.

Really all the devs need to do is:

If you look you can see me pinging the server through cmdprompt and getting 73ms average, which is perfectly acceptable for me to play at and is the ping I get for every other game when the server is in Sydney. Sometimes I get 60ms in certain games.

I can't be fucked making more screenshots of this shit and the only reason im here is because I'm hoping this issue gets fixed next patch, or I'm out.

I live in Western Australia. I have to play on Sydney servers which let me explain for the thousandth time that I HAVE NO PING OR LATENCY ISSUES WITH ANY OTHER GAME. The picture I posted up there where it has the in game server list showing 4 "Umbriel" servers, that is a copy paste of me refreshing server list showing that the ping is even fucked up in the browser before I get in the server.

And like I said it has nothing to do with my fucking internet. I've moved my PC around to other peoples houses just to test this specific issue. Who knows, maybe it's hardware but WHY THE FUCK DOES IT NOT HAPPEN IN ANY OTHER GAME.

Thank you and go fuck yourself. 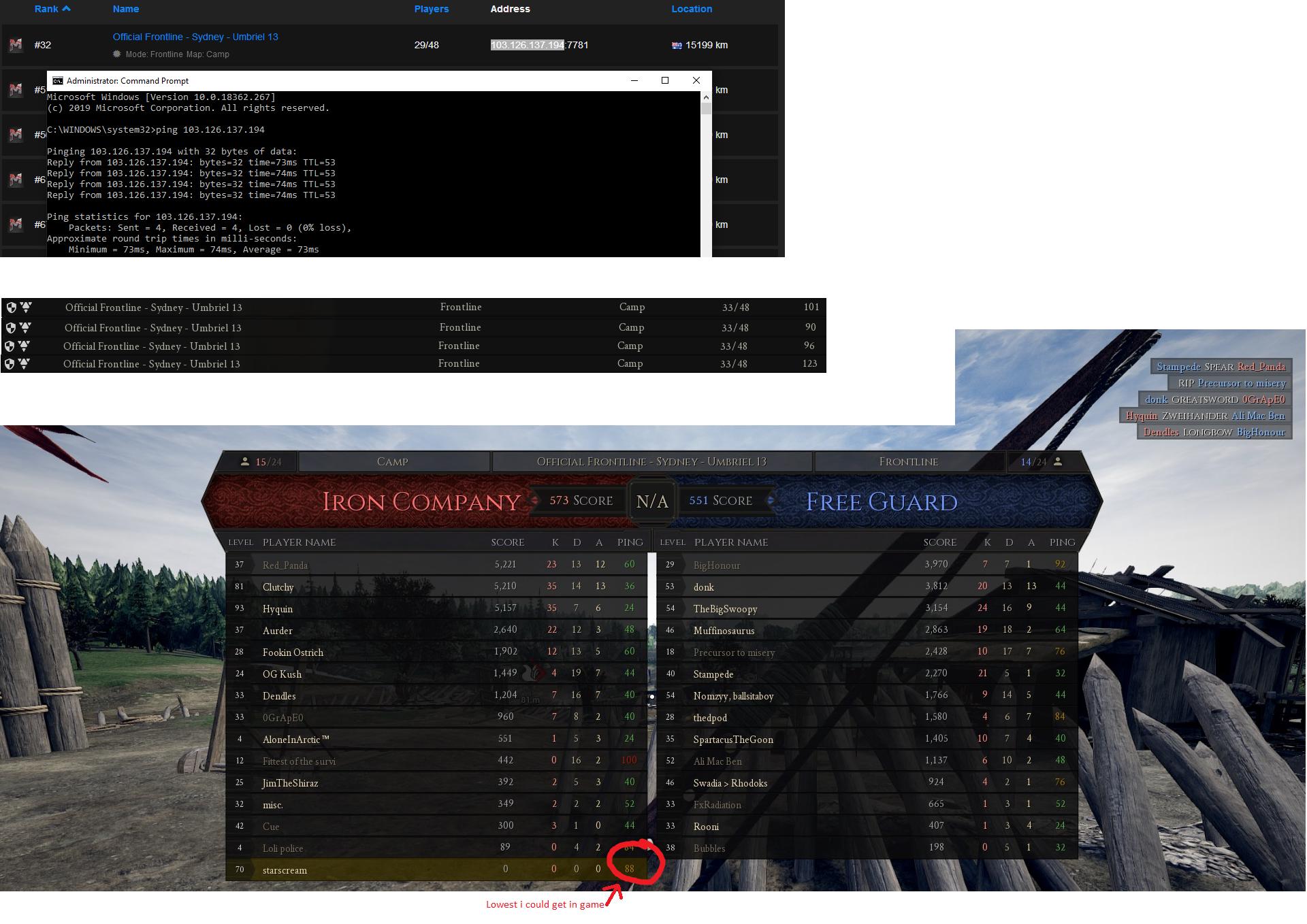 This doesn't happen in any other game.
The excuse of "It's a UE engine thing" is fucking horse shit. I do the same test in Killing Floor and I got less latency in game than the cmd ping.
Taking my PC over to my mates place with 100mbps down internet that's the best you can possibly get in my area and it's actually worse ping.
Whether or not you agree, the servers and networking are fucking dog shit. More and more people are starting to notice and it actually effects those with low ping in game without them realizing it.
300 hours no in the game never have I ever experienced low latency where everything seemed normal.
I don't really give a fuck anymore it's clear this community is a bunch of ignorant cunts with high ego. You just enjoy putting people down and feeling like your better. Fuck this game, fuck these devs and fuck you, you shit hole blind sheep like community. You're worse than the EfT community when it comes to problems with the game and updates + commmunication from the dev.

Enjoy your neckbeard duel game. Cause that's all it's good for.

Chiv 2 is going to shit on this game for casual play, it will probably have modding available before this game does at this rate and it will 100% have better map, level and sound design. I'm just going to play WoW Classic til that comes out, was a good run but just simple things like horses and servers being dog shit all the time is enough alone for me to stop playing. Not to mention the other 100+ serious issues with this game like votekicking and animation abuse.

Servers are garbage this shits been going on since day one.

Has nothing to do with our internet. The networking/servers in this game are fucking utter garbage.