Cavalry hot take: I wish the game had received less money so that horses weren't funded

On a more constructive note, they'd be a lot less frustrating if being bumped by a horse didn't flinch you.

To compare this to a horde of people's waifus on every battlefield, constantly screaming, always present at all times to the eyes and ears is a clear false equivalency. It's much more noticeable by far than the sum total of anything you listed. And you're not going to fix that for all these players by saying "well the catapult animation is off too, lol."

Compared to the current hordes of munchkin voices on every battlefield, constantly screaming, always present at all times to the eyes and ears. The voices in Mordhau, as well-done as they are, are absolutely goofy already, especially when the pitch slider is put all the way up.

neither do I use maul or dagger, and even if I did the occasion where the two would fight each other would not exactly happen often.

I used the most extreme example for the sake of example. Replace the maul with any large, two-handed weapon, and the dagger with any small, one-handed weapon.

Every polearm except Bardiche oneshots T0 heads, so no, you won't be walking away if you got hit in the head- and being hit in the helmet is not the same thing.

Do you really consider it a more sensible course of action to try and convince everyone that their suspension of disbelief is fine, and tell them to fuck off if they don't like it?

At this point, honestly? Yeah. Fuck it. This kind of attitude is so common in the game industry and so goddamn obnoxious that yeah, I've pretty much become that petty.

People keep going on about breaking the "immersion" and "realism" with "waifu warriors" and "screeching harpies." Why exactly are females where so many people seemingly draw the line? In a game where you can beat a man wearing full plate mail to death with your bare hands in seconds, parry a maul with a dagger, cut a man's head clean off with one swing of a sickle, reload a catapult or ballista hands free in around five to ten seconds, place self-building spike walls and mini ballistas, and walk off being stabbed in the head by a polearm in seconds.

In a game where you're just as likely to run into Captain Falcon, or Luigi, or Saitama as you are a historically plausible mercenary (who, even then, has incredibly anachronistic gear; kite shield and rapier, anyone?), find naked men playing Megalovania on a lute on the sidelines (who then proceed to use said lute to kill people), and have men with Oompa Loompa voices shouting "HAVE AT THEM, BOOOYS" "DODGE THIS YOU BASTAAAARD."

I can't speak for the devs, but I won't miss those people if they leave.

As far as I can tell it's a modified carving knife that repairs structures for some reason.

Why on earth wouldn't it be?

https://www.youtube.com/watch?v=Db3b_29j-jM Don't know if you're still doing these, but I just remembered the time a guy cut my arm off and I punched him to death with the bloody stump left behind.

How much health did that guy I was dueling have left? Well, the game won't tell me that, but at least I know that the archer who killed me with a longbow from the enemy spawn is at full health and using a longbow. Good to know, that's definitely useful information to have.

Alright, I lost the duel 1v1 that time. How much health does the other guy have? Oh, 100, because he's using bloodlust. Well, that doesn't exactly matter now that I'm dead, but at least I know he's using the perk 100% of people are using. I also now know that he's using a rapier and shield, because I definitely didn't notice that while I was fighting him.

I might as well put a sticky note reading "100 Bloodlust" on my screen. 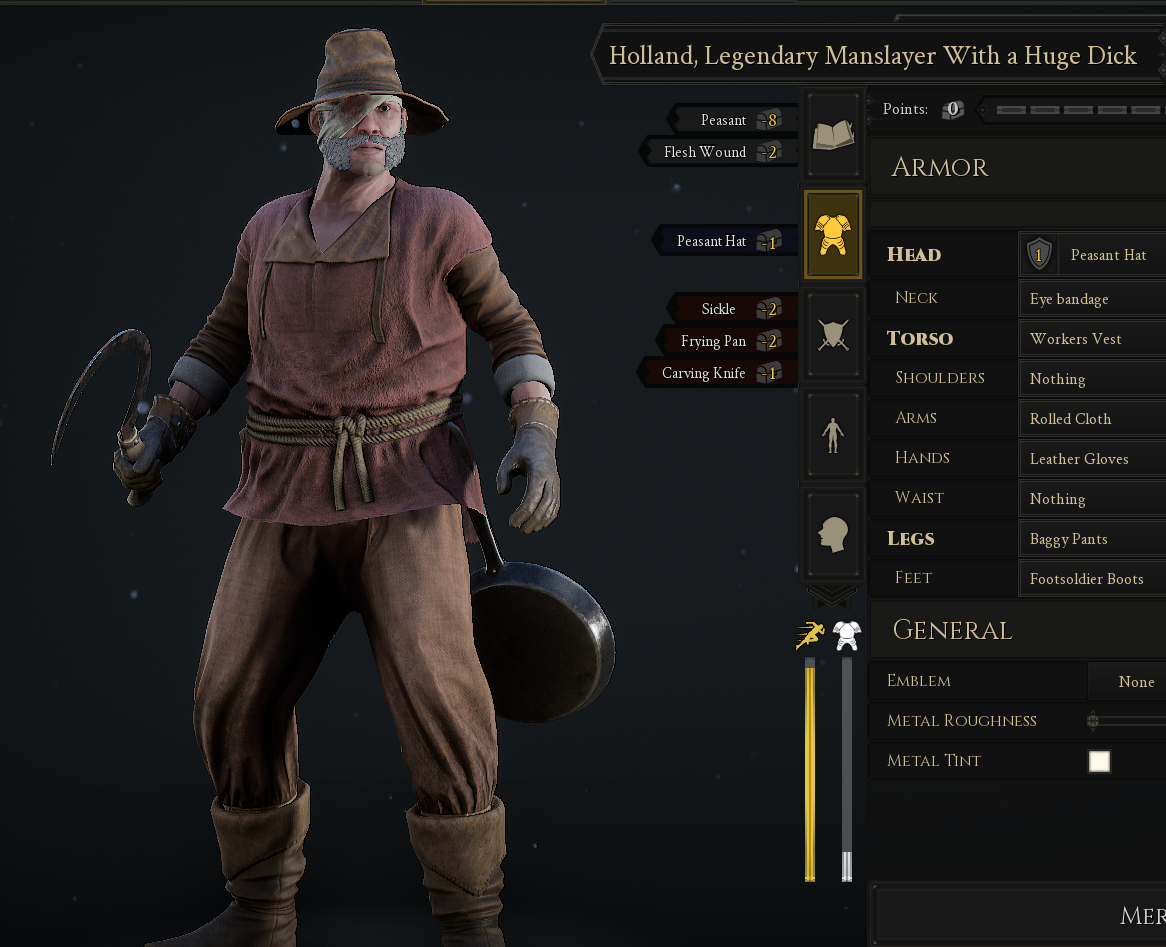 Here's a better picture if you need it.

I sent in a rather long video, but just timestamped one particular moment because I don't know how much you're looking for.

So, I love the Peasant perk. It allows access to a plethora of fun and interesting weapons. Several of them, like the carving knife and frying pan, can be thrown, but many of the peasant weapons don't have an alternate mode at all. A lot of them have some really obvious ones that would work without even needing to make new animations, so I hope they get them at some point.

Sickle - Could be thrown using the existing one-handed throw animation.

Rake/Wooden Shovel/Rusty Shovel - Could be thrown using the short spear's throw animation (Far Cry 5 anyone?), or choked up on like most of the polearms.

Hoe - Could be choked up on, or flipped around.

Pickaxe - I'd say flip it around, but I guess it's a symmetrical weapon. Maybe just for flourish, you could flip it around in your hand.

Sledgehammer - Could be thrown using the maul's throw animation.

Yeah, it's not like they have a whole lot to spend the extra points they'd get anyway, since they can't equip armor.

Yeah, it’s mainly a meme loadout, though some of the weapons genuinely aren’t bad for their listed cost (of course having to spend 8 points on the perk itself means your options are limited). Carving knife, for example, is the fastest weapon in the game but doesn’t flinch, and when thrown can one shot naked heads. I just wish more of the weapons had alternate modes.

Title. The bots can use it, so why can't my chucklefuck peasant decide to throw handfuls of shit at his enemies?

New build is up

Some of the changes:
-Lowered horse turd spawn chance

Noooo, they were already so rare !

If only they would add some way to consistently produce horse turds...Like, for example, adding it to the peasant weapon list.

Lute and Bear Trap are now available to peasants. This makes me happy.

I hope that huge rock gets added to the peasant list, too. I mean, it's presumably going to be a map pickup, right?

[3] Shoulder Bash : performing a kick after sprinting more than 5 seconds will allow you to do a shoulder Bash over a short distance. The first enemy you hit will ragdoll

Duuude I want that

Huh, so it'll be symmetrical, with no hard attack/defend roles? I'm wondering how that'll work when it comes to castles, forts, etc. Will both teams just, like, spawn in the fields around an empty castle and then storm it at the same time in an attempt to overtake it? And then whoever loses the teamfight/castle will try to storm it and take it back while the winners of the original teamfight defend?

A lot of the peasant weapons list alt mode stats (seemingly from the maul?) despite not having alt modes.

On that note, I'd love to see alt modes for the peasant weapons that don't have them.

Once the spear throw animation is added, Wooden and Rusty pitchfork could use that animation and be thrown.

The shovels could use the same throw animation, or be choked up on.

Rake and Hoe could be choked up on, or flipped around.

Scythe...uh...I guess you could choke up on it? Admittedly not a whole lot to do with this one.

Sledgehammer could be thrown using the maul animation.

Also, would it be out of the question to give peasants access to bear traps? They are meant for hunting rather than actual combat, so it would make sense.

Finally, add horse shit to the list of peasant weapons. Look in your heart - you know it to be the right thing to do.