@Den said:
I was expecting something equivalent to an Axe + Warhammer + Wooden Mallet fusion.
However it is as though I'm wielding an Alt-Mode Battle Axe with a Blacksmith Hammer taped to it, slowing it down to Maul speeds.

For my Toolbox Loadout, I was already using 3 points to carry one of the two repair hammers alongside a Quarterstaff, Short Sword, Axe, Warhammer, or Arming Sword. When weighing the effectiveness of those pairings against this new Heavy Handaxe, I still see a lot of value in those over carrying just the new Heavy Handaxe.

First impressions makes it seem really strong just because it is so vastly different from all of the other equipment in the 3~ point range. It is an all-in-one versatile tool, that big damage per hit and its long windup puts it into a niche spot just like all of those other aforementioned weapons. Extremely slow swings have great drag potential, but is still so slow that most fast weapons should completely shut it down.
After a few hours of using it, however, I'm gradually leaning back to an Arming Sword + Mallet or Quarterstaff + Hammer. A single versatile tool ultimately has inherit restrictions compared to the flexibility I'd get from spending two specialized tools (because I can drop the weapon for a bigger weapon on the ground and keep the Mallet).

I think it's just right where it is.
Could argue for some superficial tweaks, like making the Axe side slightly weaker against T3 armor, denying it the same potential two hit (body+head) kill that the hammer side has (reduce L3 head damage to 50-to-54 or so). As it is, there is no reason to use the hammer side in combat at all against any enemy armor because the Axe is just as powerful and more.

You seem to be forgetting about the stab. This new axe has equal stab damage than the estoc (french word for THRUST) itself.
Add to this my previous reply concerning it's damage being higher than the polaxe ( wich requires 2 hands ) and you should realize it is unbalanced.
The damage on this thing is just too high in every department.

It does more damage than the polaxe. In both of the grip versions.

@ohshitsorry said:
It looks like he neglects his dental hygiene.

No, these are golden teeth

Yup, gold is bugged out of the game

Oops i forgot i had no mic

Tell me more about the kind of players you're interested in. 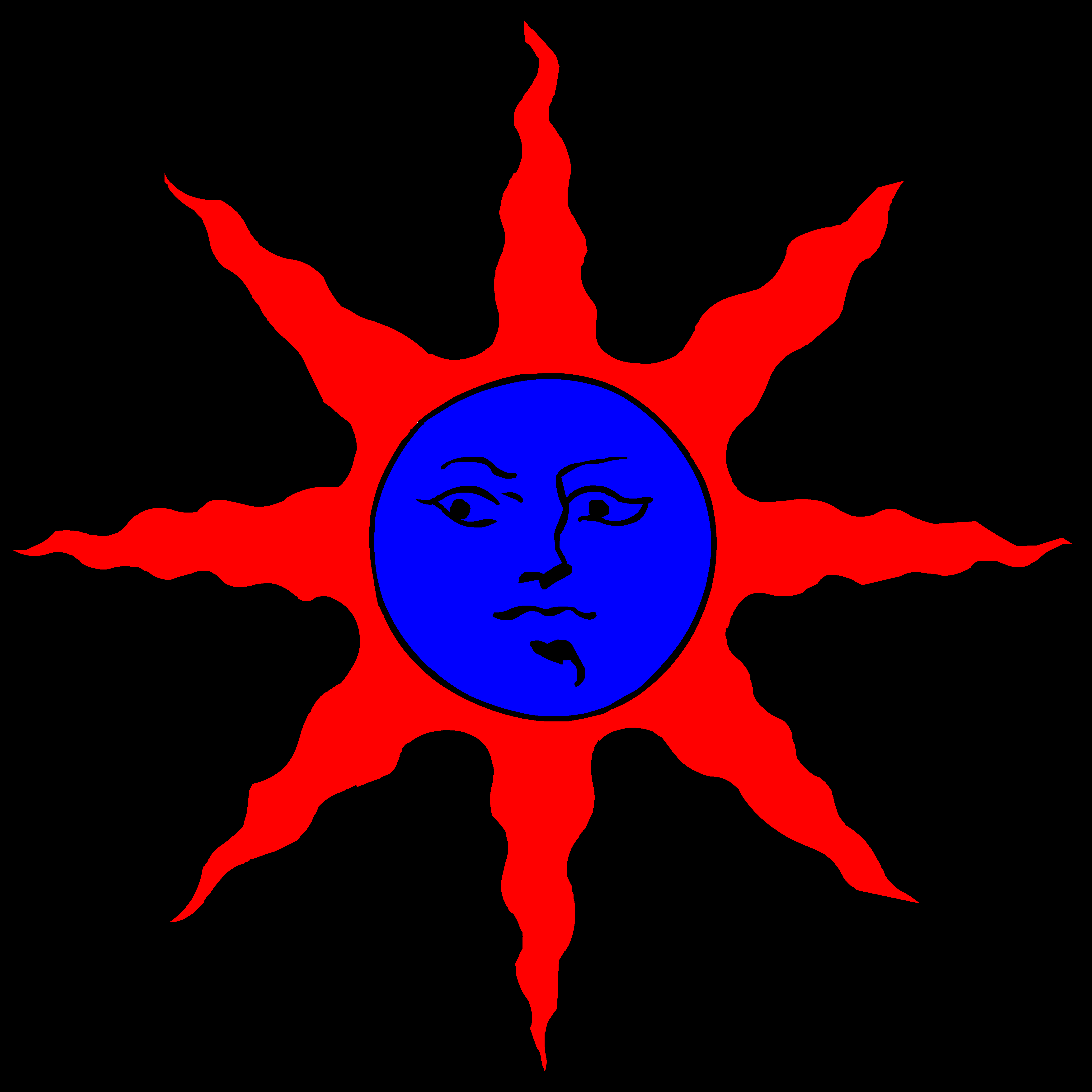 Hand it over, that thing, your Custom Emblem.

For my Solaire Cosplay.... 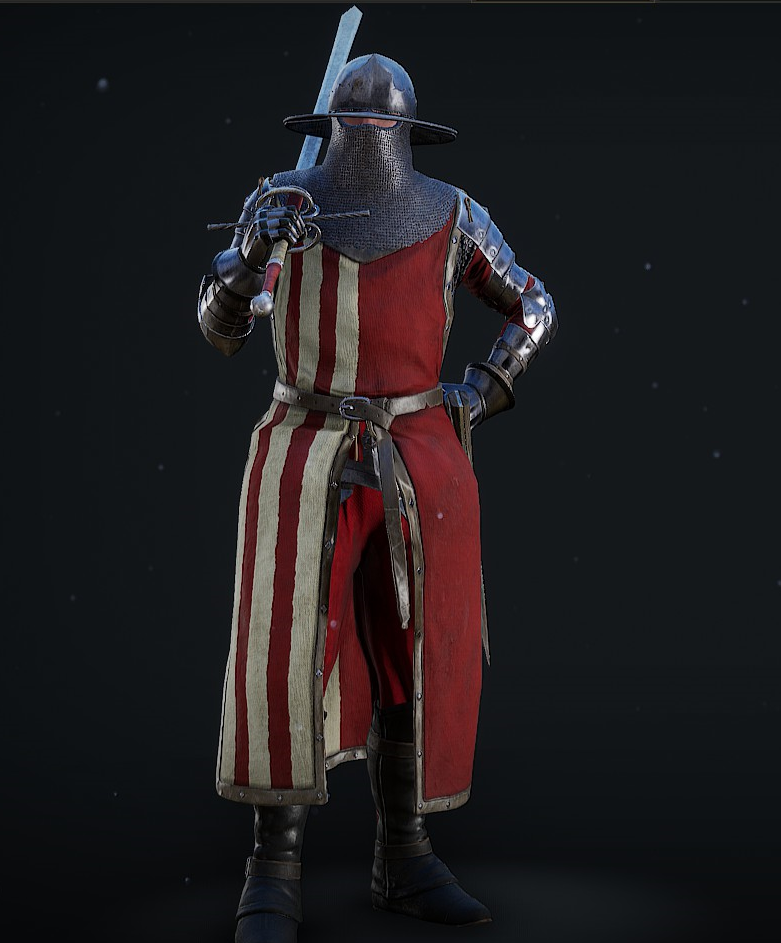 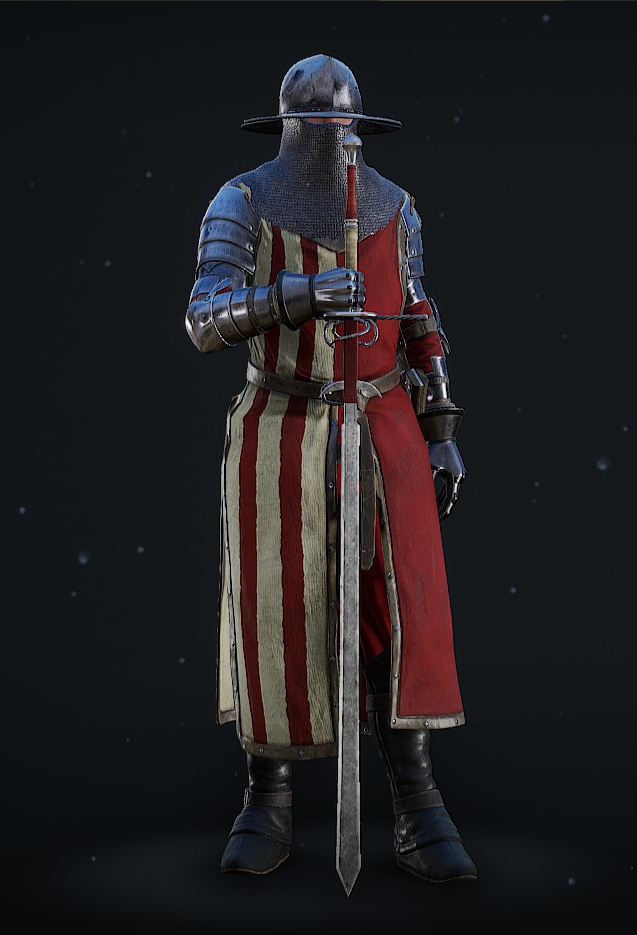 Figured it was about time I posted my own Knigga , pretty happy with both it's look and strength.

I like the look, however the naked legs will be your downfall when you stumble upon hidden bear traps xd

@Bodkin said:
Do notice how both the Footsoldier and Brigandine legs have padded chausses / gambeson legs under the metal pieces.

and t3 legs. there are basicaly only 3, one is given to you, an other costs 4 k and requires you to be rank 30

So, i have not yet posted my Geralt, and since the new draped cuirasses were added, i thought it was the right time to try to create Ravix of Fourhorn 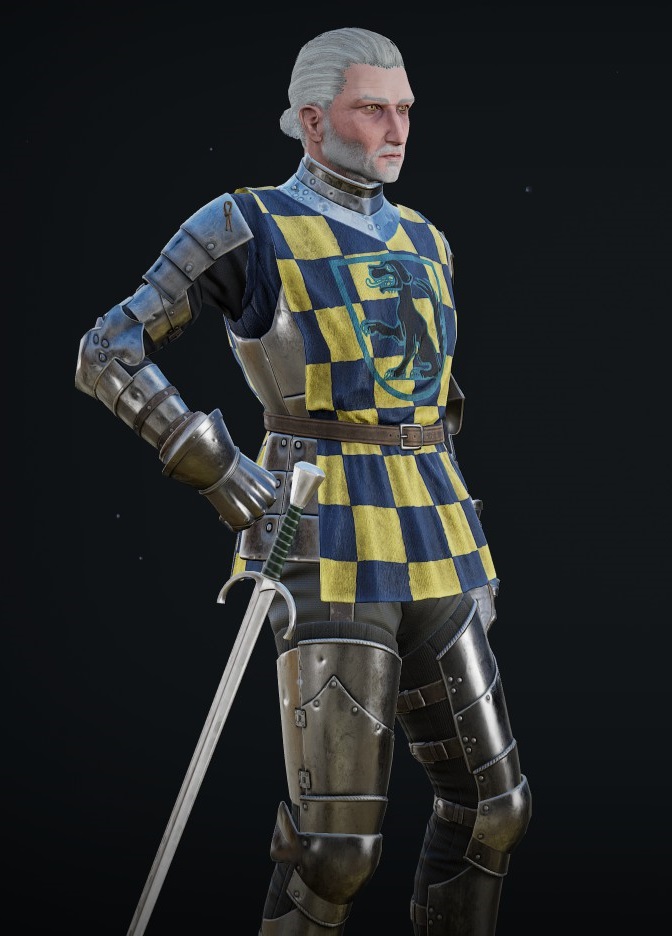 For Honor! For Toussaint!

@Ruby Rhoderick said:
I'm playing at 2560 x 1080 (21:9) FOV: 101. Did a search of the forum, but couldn't find this bug mentioned elsewhere - though I feel like it may have been brought up before. You can see at the top left and right there's a visual bug with the sky-sphere thing.

On Battle Royale there is a sphere that emits sound and is visible, that skrinks as the game goes on. i don't think this is a bug

Finally managed to afford these overly expensive legs and shoes.
How does this one look ?

The metal tint is also too blueish, a more standard "white" would fit the cosplay better, but it's your knigga after all

needs the rimmed pauldrons with the gold lining. Rank 100 required tho so see you in a year. unless preview mode is added

Nor do we have any plumes

@ŁĐFlamarys said:
Decapitating women would trigger every SJW in a 12742KM radius. However dev blogs featured a female model, so i don't think the idea is dismissed yet.

Women are confirmed to be in the game.

Decapitating women would trigger every SJW in a 12742KM radius. However dev blogs featured a female model, so i don't think the idea is dismissed yet.

@ŁĐFlamarys said:
Yeah I guess I can remove the perk "peasant" and get the 3 firebombs as well as the "bloodlust" perk. Not too far fetched from reality^^

Not exaclty a bug, but you can exploit the cat perk in grad, survive falling off the wall by the river, and get to a safe spot 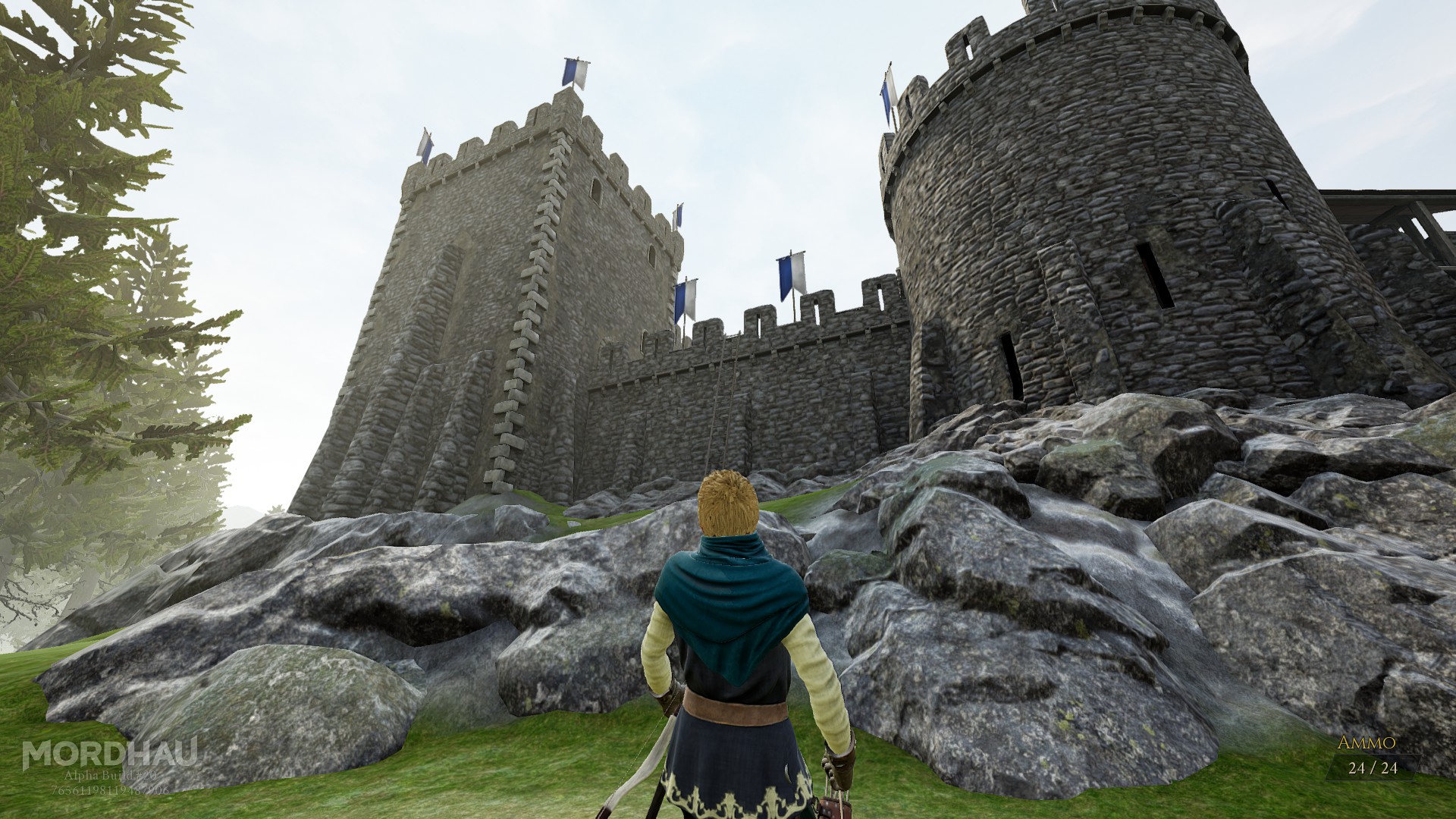 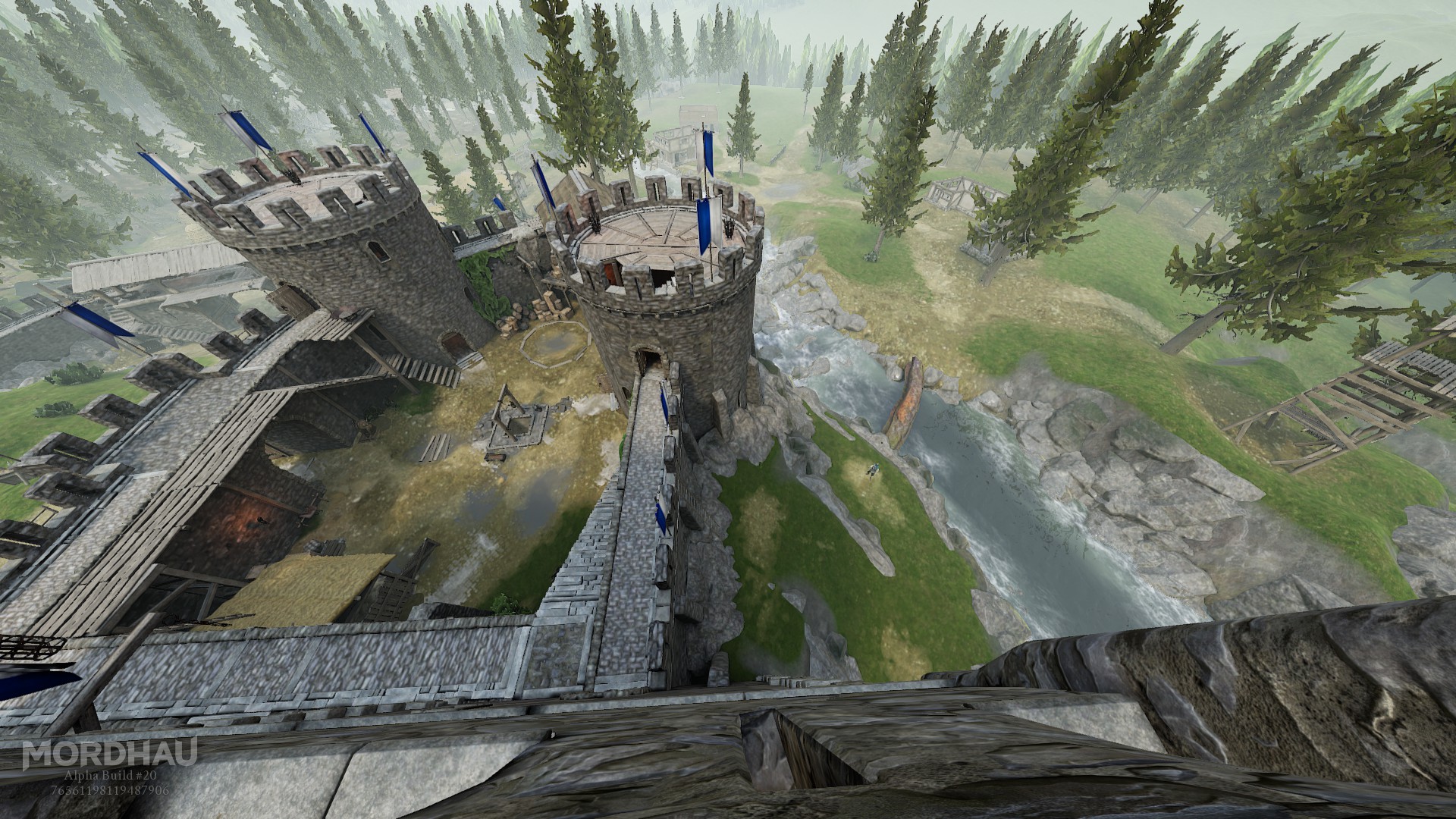 You can also get there without the cat perk, by sliding on the ladder to take reduced fall damage

Yeah I guess I can remove the perk "peasant" and get the 3 firebombs as well as the "bloodlust" perk. Not too far fetched from reality^^