This is ridiculously ugly. And even ignoring the way the textures are stretching, just look at the way the shape of the tabard itself is stretched (since it stretches to cover both legs).

The "Raised Gothic Armet" is the Raised version of the "Close Helmet."

Why is the "Close Helmet" not named "Gothic Armet"?

Admittedly if they're backpedaling and chambering then I can probably just out-space their attack after it starts, relatively easily and then rush back in to attack for a stamina advantage (since they have to CFTP and while we probably both whiffed, my whiff cost is lower with Cleaver). And if they AREN'T backpedaling then maybe I can kick them. This is about as far as my Reddit thread got too. Evade or kick, depending on their footwork, and keep that up consistently enough to deplete their stamina.

I should probably give in and at least add a Buckler so I have a parry game, but the main premise of this build is to try what seemed like underexplored options (very fast weapons and a heavy evasion/movement focus) and get better at the evasion side of the game in general. But if I did add a buckler, then I could probably beat this theoretical opponent by just stamina-warring, letting him eat his own stamina with chambers and trying to manage my spacing (with my movespeed advantage) so I can react to his chamber mixups and parry them. In theory.

Let's say I'm wielding a cleaver and have 1/1/1 armor. Let's say I'm fighting a guy in 3/3/3 armor who's consistent at chambering swings and responds to my swings with chambers (into dangerous feint/morph mixups) every time. Let's say he knows that my cleaver's stab only does 7 damage at most (on headshot) to his armor, and let's say he's basically fine with getting hit by stabs since it takes 15 stabs minimum to kill him and he figures he can land 2 hits on me in that time. And let's say he backpedals every time I try to attack him so kicking him isn't really an option.

What can I do to land a slash on him?

(I have a long thread on Reddit where I analyze various options but I'll keep this thread short. I haven't figured out a good answer myself.)

(I guess if this theoretical foe literally lets me stab him then I could just stab him 15-20 times to kill, and if he gave up and tried to parry or chamber, I could morph to slash him. But let's say I don't like that plan because stabbing someone 15-20 times to kill is tedious.)

(Also, if I add a Buckler to my kit then I could beat him via stamina depletion since chambering is expensive, but only if I can deplete his stamina without getting hit by his chamber feint/morph mixups, which seems like poor odds.)

So is there nobody on earth who can confident explain what this patchnote means?

this is no joke mister, this is no kidding around

What is "held block volume" and how has it been made "easier"?

What's going on there?

@LukeSkywish said:
Question: is there by now a way to have Jedi Knight controls? Like if you move left while attacking it results in a left slash?

Yup. That's an option, in the options. You can enable it if you want. I don't particularly recommend it since obviously it limits what combinations of movement-and-attack you can do, constricting your footwork.

just to be the straight man of the group, let me state the obvious and say that Mordhau is not set in a fantasy setting.

I mean it has elements that you could call "fantasy", but not in the magic-and-dragons sense. 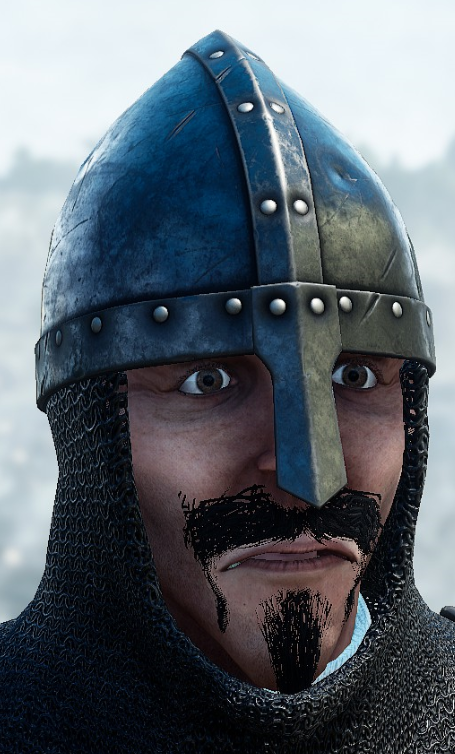 36, Tall and lanky, enjoys root beer because alcohol is the devil's drink.

Will converse but will not commit to a real relationship.

I, too, develop headcanons around my character designs.

Someone explain this to me pretty please.

Is it perhaps because both players are using Training Swords? (I've read that Training Swords use 8 stamina to chamber, vs 15 for other weapons. Does that bonus "stack" when both weapons are training swords, resulting in 0 drain?) 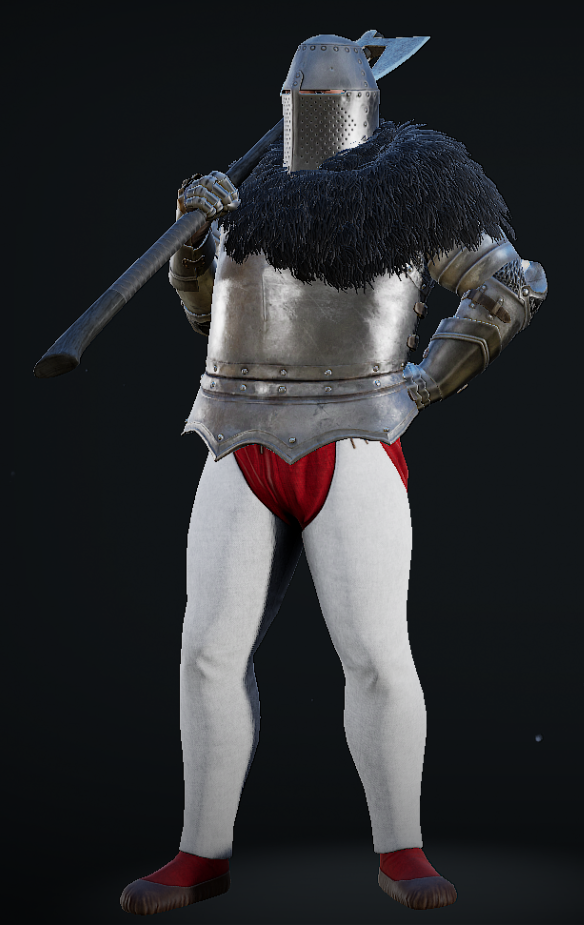 Actual favorite recent designs of mine 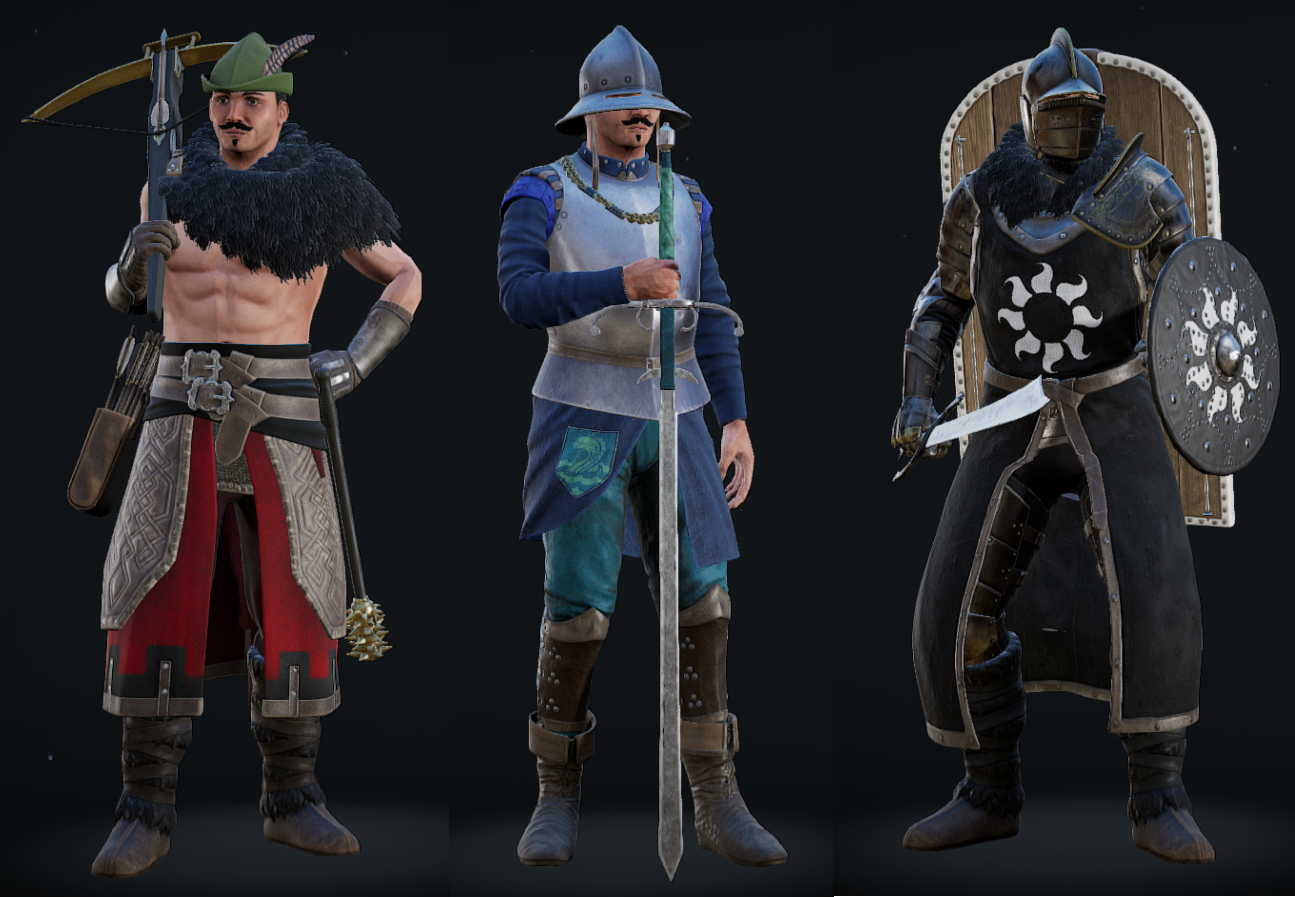 I just tested in-game myself, because I remembered that parry actually has two anims depending on your horizontal mouse input, so I was curious if each anim is restricted to only doing ripostes from that side.

The result of my test was that I found it pretty much impossible to do a "right" parry followed by a "left" slash with just 240 inputs (even though it felt like I was doing reasonable mouse inputs for doing that), but I could do it easily if I held the Flip Attack Side button while doing the same inputs. (I have Flip Attack Side bound to a mouse thumb button since regular 240 behavior is good for chambers while reversed 240 behavior is good for accels. Takes some learning to get used to using both ways, of course.)

So uh if you're using 240 instead of binds like I am, then I recommend binding Flip Attack Side. i guess

@Hawba said:
My one issue with spears at the moment is that they can do "backwards slashes" (I don't know the name for it). It's when the player misses you with an overhead slash (and stabs, it seems), missing you slightly, and then they can correct their mistake by hitting you on their way back, pulling the weapon into you. The mechanic makes sense to me with sword weapons but with spears it feels like an abuse. You have missed me, I have closed the distance, but you get a retry on your pull-back.

There aren't any hit tracers when pulling a weapon back. You're not being hit by the pull-back, you're just being hit by surprisingly late parts of the still-traveling thrust. Which I agree is dumb (they're basically hitting you with the side of the weapon for full damage as if they'd stabbed you with the tip). I'd prefer if these "stab-whaps" just did awkward whappy damage. Basically, if you hit the enemy with a part of the weapon that isn't the tip, or you hit them with the tip but also a good bit of the shaft (if you whap them with the side of the end of the weapon), it should do considerably less damage. Stabs should require stabbing. With the tip. Just the tip. Gosh.

Although I recognize that stab-drags add "depth", but while I'm fine with all the other kinda wacky depth layers to this game, I find this particular one overly-ugly.

Is third-person formally banned in the informal Mordhau competitive scene/clique?

Will third-person be disabled in Ranked modes? (Which, as I understand it, are planned.)

(For context, I like third person. It makes drags/accels much more intuitive, gives me greater awareness in chaotic group fights, lets me see my customized character, and gives me better "full body awareness". I think that if people dislike the way that third person enables a drag heavy playstyle, then DRAGS should be nerfed, not Third Person.)

Does this apply to all combo swings or just consecutive misses? (As in: Do I lose 24 stamina if I swing and hit someone, and then combo swing and miss?)

(Edit: Per this clip at 1:22, I'd say the answer is "no." If you hit someone and then combo into a whiff, you'll only lose a normal amount of stamina. You only devour your own stamina if you're whiffing consecutively.)

Game's kinda in need of an in-game repository of "hidden" mechanics. (Including the automatic self-heal that happens if you wait a bit. Which I myself am well aware of and have known about since shortly after launch, but which many, many Frontline players seem unaware of.)

Not that those bad players would use an in-game library if it existed. But maybe it could be presented as an "Advanced Tutorial" that you're recommended to do after you finish the regular Tutorial, that would cover extra mechanics.

If I swing my Zweihander at empty air, the first swing will drain 12 stamina, while every combo swing afterwards will drain 24 stamina. Is this intentional? It doesn't seem spelled out anywhere (e.g. the Miss Cost tooltip), so I want to confirm.

I should really test more before I make a post like this, but, I just want to point out a strange thing I just observed. I've been wondering about footstep sounds and whether I can improve my situational awareness by paying more attention to footstep sounds. So I was watching an ally running along, and noting his footstep sounds.

The weird thing is:

When he was close to me, I could hear a footstep sound for every footstep.

When he got a little further away, I could only hear "every other" footstep.

A little later I looked at a guy a little further away and tried to hear his footsteps but couldn't hear anything. (There's a slight chance he had Rat. I need to test more.)

There are probably technical reasons (like optimization) for this behavior, but I sure wish I could just hear all footsteps.

(Other, unrelated request: I wish the team indicator yellow cross things would get smaller when further away. They cause so much screen clutter.)