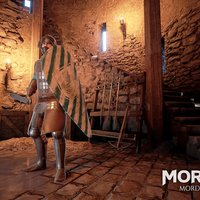 Nah it's not really bad at all like it was in chiv. It's very avoidable and does not promote gamble spam like it did in chivalry. It also makes teamfights feel a lot better and less clunky.

The only downside is 1vx is much less possible than it used to be. But I think the positives outweigh the negatives and there are probably other ways to make 1vx more possible but idk if devs really want to.

It's totally broken you should have said

Lockout for attacking yes.
Not for grab back your weap.
Free hit shouldnt be and neva be a Thing in competitive melee game, 0 stamina should disavantage you.
A free hit should be a thing but only in Xvs1, when other opponent time their attack
I think "clash" after disarming an opponent should be slower, so the "defenser" can get his weapons back then chamb\parry
To fix E macro, its simple, put a lil lock after each keypress so if you spam E and dont aim at your weap you'll not able to get your weap for like 0,5 second

"cancer with shields tho"

Before the patch 15 I volontary leave my shield at the ground, and volontary parry instead of chamber to get back my weap and +30 stamina then hit opponent then take my shield on the ground

"I think it is as simple as putting a 1-2 second interact lockout after disarm maybe."

@Sir Zombie said:
Some people are using a macro that spams E so they can never lose their shield

False, you can do it without a macro, I do. So.

And it work with 2hander or 1hander too
Remember, Dev do it in a video before the release

3rd : Its a macro, not a script, nothing is wrong as long as you dont use an extern program. People use macro to auto fire in FPS too so
Macro like this aren't allowed in competitiv LAN tournament; But There'll never be with Mordhau so dont worry boii

Shield get a stamina nerf, they are fine and you still ask for nerf ?

Can we play on EUROPE server if 2 team from EUROPE scrim ?

No that's not me Naleus pls

Not sure if you've noticed but you're the one that drags my name everywhere online, I only ever respond to btfo the misinformation you spread. Fact is you agreed with me all call and kept your shittalk behind my back, bitch move that in no way surprises me

Damn did giru put a picture of boobs with his name on it just as we did like 10 years ago when we were 13 YO ?

Ofc it shouldnt be here.

The only time we should be able to instant attack after a feint is after a chamb feint, but we already cant...

@Snowy said:
you realise that you're not meant to chamber every attack?

Ofc you are at high level. It's the high level parry.

But yeah mate you are just bad at reading Fast/Delay, and you should always feint to parry, when the opponent drag goes over your chamber parry windows

Dont think the lunge is "ramdom" it mostly depend of your movement speed I think.

In chivalry it was too ez to turn back and disangage/dodge fight, it was possible with a shortest weapons than your opponent, cause the knockback was big in chiv, and the lunge was shit, remember it's a melee game so someone who turn his back in a fight should be punished, and not rewarded.

The only moment where you should be able to turn your back and dont get hit, is when you hit opponent Chamb/Parry with a longer weapons than opponent then turning back while running, and it works already.

Yes footwork is possible, but its not like chivalry, in chiv you just turn back/side and run, then dodge, without watching at opponent attack, here in mordhau you need to watch at opponent windup, waiting for release then start to dodge at the last moment.

Edit : Chase mechanic will come ? Or something to reach lighter armor ? That's the main issue in the game atm.

Short spear is the best weap or one of the best weap, atm not cause of the weapons stat, yeah it does too much domage with strike atm, 20 on plate, instead of something like 5 or 7, but if shortspear is too strong now it's cause stab drag are too OP

Stab drag/Delay still too OP
Chamber harder than before but not rewarded
Fake Overhead into leg hit still possible and OP (same for fake under into the head )
1h spear is one of the best weapons and cost 4 point only
No nerf on 2hander that need it like B-Axe, Messer or Bardiche

For the stab what I mean, is the windup connect with the opponent release just as a clash. With weapons hitbox.
So if opponent drag stab on your side or over you and you put your windup in it, it will chamber it. Instead of going through of your animation

Yes you are too slow, deal with it, and I play every weapons in the game already. And yeah slower weap can counter/punish faster weapons, If your weap is really slower than opponent just feint and chamb the next attack

And activ parry is shit atm, you hit the guys on the opposite side of his riposte and it still parry, its fuckin bullshit atm, it only need weapons hitbox and not much

Being unable to punish after attempting a chamber
It just mean you start your windup after your opponent, we can actually punish with a slower weapons. You are just too slow

Tracers being too long
It give a downside to delay. Its fine

Projectiles flinching
You can see it, just open your eyes

Inconsistent active parry
It should happen as a clash hitbox instead of a big parry hitbox, to make skilled player able to activ parry and bad player not able actually active parry is too OP and not skilled

Attacks being queued without input
False, you attack unvolontary, actually have 0 problem with it, it's your fault, not the game

Lockout
Its not the lockout time but the Flinch time, but yeah it need to be fixed

@nohbdy said:
The way to balance shields is make 1 handed weapons really shit on their own so it'll be difficult for the shield user to be able to kill opponents. Shields making defense easy is fine as long as it makes offense difficult in return, and please for the love of god don't try to balance shields by adding lockouts such as kick stun or eliminating the ability to riposte like chiv. That's just terrible for gameplay. When it comes to balancing one handed weapons such that they are balanced against two handed weapons as long as you have a shield with it, just make it so they're no faster than their sort of two handed counterparts because even though they're lighter you're only using one arm to swing it anyways, and this would go in addition to dealing less damage and having less reach.

I think point cost of the kite shield is fine. If you want ultra tank mode (kite shield with full plate armor) you can only use like a 2-point one hander with it, so again just make one handers really shit on their own.

Yes that's what we need, one hander nerf
And no kite shouldnt cost more point, heater is actually better and cost 4, Kite should cost 4 too so

Jax shield are fine now, deal with it, 1hander nerf and it will be perfect.

And yeah they require skill and timing, if you dont chamber, you lose every duel against good player.