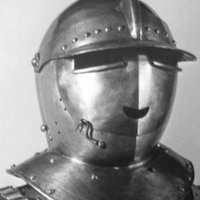 The real question is why do they still have BR as an option on the main screen when you go to play? It's counterintuitive for new players. There's a lot of basic things I feel they could do to help player retention.

@PC_Principal said:
I get your point, but as frustrating as it may be to get kicked as the first from an FFA game, deal with it and pay attention to chat.
Maybe people on that particular server were in fact trying to establish dueling manners, while you kept backstabbing those who dueled? When you were asked not to backstab you ignored that and thus got kicked?
I only visited FFA servers 3 times or so, first I backstabbed, then people told me not to. There were others who didn't listen. It was exactly that scenario, people asking to kick backstabbers and wanting to duel on the FFA server. The one guy wouldn't stop ruining duels, even tho we asked him to, so I agreed to kick him.

Another thing you're not taking into account: What if there's a real cheater, and people can't kick the cheater?

Cheaters are pretty rare, and no I'm not talking about a duel server. I know what a duel server is, I have about 300 ish hours in duel servers. I'm not talking about FFA servers where people are dueling either, and I would not complain if I got kicked from something like that. Most of the time people will say something like "goodbye try hard" then vote kick, or "vote kicking because you have the big gey" etc Lately I've been having the most fun in FFA so that's what I try to play the most. The most troll build I would use is sledgehammer if too many people are using shields but I don't even need to do that anymore.

If there are only low levels playing, I go peasant unless they want to team me which I'm fine with and even encourage

@SWSeriousMike said:
Did you perhaps RDM on a duel server?

Anyone that's half-way good at this game will know that people will just vote kick you from FFA if you are better. And no, I'm not playing fire mage or troll builds. I just want to play some FFA without getting kicked

That would be really helpful. The 240 system right now is not considered viable by the fast majority of high skill players. A lot of people don't find this out until they have already spent a lot of time in game. It would add a lot of value for everyone (not just the high end of the skill ceiling) if they made it fully customizable, i.e having the option to limit the 240 system to exactly the angels you want.

@DDRMANIAC007 said:
How many cores and how much memory for how many slots is a good guideline?

I recommend starting with high frequency $6 a month 1 core. It has worked great but I've only tested it up to 32 [email protected]
High frequency servers are not in every location so check inside vultr if they are available. Also, if you are in NA West make sure to change the restart time to 1pm or something

Any plans for a way to add community maps that are out now?

Map making is hacky right now, due to no SDK for official mod support yet. It is still very doable though. Here is a discord server with tutorials https://discord.gg/4mAKaZ

Once the official SDK is out, it will be a lot easier.

What type of map do you want to make?

I only play duel servers so Long sword because it can do everything, and it's the only weapon I am consistently good with. War Axe when I need more damage or if I am lucky enough to find a skirmish server with people playing.

@Aodlop said:
Some weapons or traits could be banned on this game mode if deemed too effective

What would you want banned from 1v1? Just curious.

I would be surprised if they banned anything although I would not mind if fire/smoke bombs and crossbows were banned.

@FALCONPUNCH said:
Yes, this. Push the SDK out, let the community make maps to tide everyone over and democracy will sort out which ones work. I would be willing to bet that there are some very talented map makers used to UE4 who are invested in this game.

Exactly this. Also, I think maps with better objectives will have more replay ability than just more of the same. They could even do some rework of existing maps. The map editor for other URE4 games is really easy to use, and modding itself does not require coding skills (outside of visual scripting). I personally plan on making a few mods.

Edit: The biggest downside to URE4 modding is it requires you to use the Epic launcher

When modding is added, anyone with enough time should be able to make their own game modes. It'll be interesting to see what gets popular. As others have said, forcing people to be in clans would split the player base.

That said, I think there's a lot of potential in 5v5/8v8/10v10 modes, especially if they are objective based.

Sorry if this has already been answered, I have not been able to find anything on it.

Is there a way to edit game files with the new admin dashboard? Under general settings I only see Server Connection Key

@Qwampa said:
Would be nice since halberd and spear lower cut regularly get stuck in the ground.

240 system is very intuitive when you're starting out or are not already used to other melee games like chiv, this would do nothing but make hybrid closer in line with full binds. Not everyone can go out and by a new mouse for 1 game.

Having the option to limit angles on 240 system would really help in making better hybrid control schemes i.e use binds for everything but 4 directions.

When I add my Vultr API key to https://admin.nx.ie/auth it just reloads the page. The API key still works on the old version though.

Edit: I should say it goes to the dashboard page for a split-second then back to the login screen.
Edit 2: I was able to get around it by making a server on the old dashboard then the new dashboard auto logs in and I then made a 2nd server with the new dashboard

@Athos said:
Is anyone using this on vultr getting random restarts? The restarts are fast but they still kick everyone playing.

How often and what plan are you using? There is daily restarts at 6am, but this can be changed.

There's restart within 3-5 games. It was happening with the cheapest $5 1core plan, so I upgraded to the $20 2cores and it is still happening. What time zone is that 6am restart? Server is a 24 slot 120tick duel server using your handy preset for duel servers. For all I know it's not a full restart but everyone playing looses connection to host and the map is restarted when I rejoin.

Is anyone using this on vultr getting random restarts? The restarts are fast but they still kick everyone playing.