Here are my thoughts.

This game has a solid foundation. A combat system like no other, varied map/game modes and a visual progression system that will keep people playing.

There are two problems

The first one is, it feels unpolished. Little things, audio, not enough objectives on frontline, BR missing a lot of expected BR things, et cetera. These are things that can be fixed in a few months, if desired.

The second one is, there is not enough stuff to keep the casual crowd playing. This simply requires a fleshing out of gamemodes, maybe adding a daily rewards system, just... stuff.

Now, these could be fixed with a delay, however, delays need time, and time consumes resources. Something the devs don't really have a lot of left.

Skip over the polish, and focus all pre-release resources on adding more things to the gamemodes, and patch in the polish continually. The vast majority of players will find mordhau in a more than playable state(dare I say highly polished compared to most stuff churned out by "game-sweatshops" today), and gladly slash away for a few months, perhaps a year. These players give the devs time to add in the things they could not during development. This, however, comes with the risk of spawning a hate bandwagon of angry gamers who are rising up, complaining that the game is released incomplete, and angry virgins on the internet can do a surprising amount of damage to something's reputation, especially a small game like Mordhau, which cannot afford a massive marketing campaign.

The problem of the first one can be fixed with early access, but that spawns new problems of its own.
So, with early access, the devs could:
A) Access money they need to finish the game.
B) Get a large playerbase hyped and in the game.
C) Get feedback on polish related problems
D) As mentioned in the thread previously, they could pose themselves as "what EA should be", which mitigates some of the cynicism of hardcore gamers.

However, early access has a myriad of problems, too:
A) Many hardcore players, who are drawn towards mordhau's combat system, are turned off by EA and need a good reason to buy in. These are the people who will keep the game going for years and years, the game needs them.
B) Early access implies frequent updates and communication from the team, which, lets admit, Triternion doesn't really do.
C) Having been in alpha for so long, and then releasing in EA will rub a lot of people the wrong way.

But hey, the devs know what theyre doing. 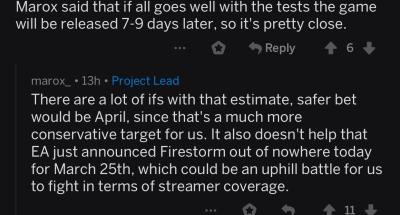 What do you guys think?

Coming "soon"
Possibilities:
End of march ("7-9 days after open weekend")
Early april (was mentioned in a reddit thread)
So regardless, you wont have to wait long