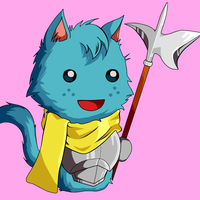 just get good, can't bad game if get good

@Jax said:
it could feel unresponsive/clunky

Put it on a queue. If you try to feint during the punish window, it feints as soon as it ends, assuming you didn't get hit. Only veterans that played Chivalry or alpha Mordhau would even notice this change anyway, which is why mechanic changes should happen now, during the alpha.

The fix is way simpler than that. A small window after comboing from a miss where you can't feint, say, 150 ms. This still allows CFTP for reasonable misses but allows blatant whiffs to be punished by attacking during their release. Blatant meaning, started the attack out of range, failed to feint it, kept running forward, and did nothing to avoid the punish.

Then you get to punish whiffs the logical way, with an actual reward for your punish, intuitively, like it works in any self-respected fighting game, but you still get to CFTP out of any whiff that wasn't an absolute retardation on your part.

Of course, half the argument against this assumes that this window would be huge and that any slight miss would be punishable with a free hit, because it's so much better if we intentionally misinterpret other people's points to push our "i'm so good git gud game no need change" agenda.

Crush is good at game balance; game design is a whole other thing tho. Unfortunately a lot of people can't see the difference between both. 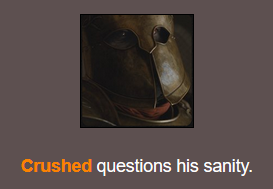 I do believe Crush is open to change, judging by the few times I talked with him. He just falls into the circlejerk and ends up believing shit like "sidestabs look bad to noobs". But he showed intent to add depth to the game and make alternative playstyles viable.

@GIRUGIRU said:
Seeing as you're attempting to derail after being disproved, just to clarify:

Let's say that between release and combo windup, there was a period of 100ms where you cannot feint. Let's say that this had always been like this.

If in that case, I was Vanguard, and I uploaded this video from my PoV, where I whiff attacks and get punished with a free hit, and I said that we should be able to feint during that period, would you be on my side?

No, you wouldn't, you'd come up with your "just a l2p issue git gud" copypasta.

Proposing improvements for the game != Not being able to adapt

I adapted to reverses and vanilla SoW feints in Chiv, doesn't mean the game wouldn't have been miles better if they had been adressed.

You fail to understand a simple concept, use inconsistent arguments like the noob dilemma, which you use only when it's favourable to you, and then proceed to insult people when you have nothing else to say. Also don't forget about those times that you performed your usual "git gud" show in threads were devs themselves chimed in to say that those situation were actually bugs/in need of fixing, because of course, you don't put thought into your posts.

You try so hard to make everything revolve around your tough boy attitude, it's almost like being cuckolded made your ego fragile.

Ah yes, "I can't argue so I will go with the I'm smart ur bad argument"

Those weapons can't combo. I'm proposing a very tiny punish window for combos out of missed attacks. It doesn't require a lot of thinking to see the difference.

It's basically a completely exaggerated speculation of what the change would do, that assumes:

A small 100-150ms no-feint window at the start of combos would only allow a punish if both people are already close together, the punisher reacts quickly, and the whiffer fails to maintain a minimum distance to get through the small punish window. This is exactly what was happening in my videos; I wasn't baiting anything, simply reacted to a whiff like you would react in a traditional fighting game, the intuitive way.

It's only guaranteed damage as much as being in parry recovery is guaranteed damage. Yes, you're basically a free hit, but that's after you've done a significant mistake. A small no-feint window at the start of combos would allow for blatant whiffs like the ones in my clips to be punished with a free hit. Notice that in this clips first my opponent whiffed, then they failed to react to my attack, as they should have backed away to avoid the free hit, and just kept running into me. Of course, they did this because they knew they could CFTP instantly, but if my change was in, you'd simply need to not run into an opponent after a blatant whiff. Traditional fighting games like Street Fighter usually leave a lingering hitbox after an attack so that whiffs can be punished.

Claiming that it would make people start to play around constantly baiting misses is very exaggerated; I'm proposing a slight punishment window for comboing out of whiffs, not a big one. If someone is trying to bait a whiff, they're going to have to stay at a good distance; What this means is that you have time to realise when they're trying to run away to force a whiff and simply backpedal too, enough to delay the punish and get through the no-feint window.

I'm not talking about 5 hour players when I mention new players, I'm talking 50-100, where they start to understand the mechanics of the game but are still learning how everything plays out. To this kind of player, the intuitive way to punish a blatant whiff is to stay away from the attack while throwing an attack of their own. It's essentially how it works in traditional fighting games.

As for feeling clunky, I don't think it would. It's a small window that visually takes place while the player seems vulnerable. Feint inputs during the window can be made to queue the feint for when the punish window ends, which to the player would be barely noticeable.

Getting to morph/feint/drag to punish a whiff is not a punish, it's just getting initiative back, since the whiffer can combo-feint and start reading. Conceptually, it also turns interesting plays into more of what the combat already revolves too much around. And as we learnt from Chivalry and shields in this game, balancing through stamina is a boring approach to combat design.

It doesn't have to be a huge change to make the game a bit better. Good games are good because they're good all-around.

@rob_owner said:
i think i value training over intuition. Accept the rules of whatever fighting environment, so it doesnt matter what scenario you give.

That's completely beyond the point. This discussion's point is to make the game better by making the combat intuitive. It's not about complaining vs adapting, it's about providing feedback during the alpha to improve the game, because that's the fucking point of the alpha.

@Stouty said:
Matrices won't ever be a consistent strategy by themseves

Nobody said they should be, just that you should be rewarded for pulling one off. Properly rewarded, not just given initiative to keep going with the monotomy of the combat right now.

Ye that's easy to do, but it's not a risky play because you have the chamber to back you up. Even then, it really only works with footdrags as far as I'm aware. You can't chamber while matrixing a stab to have a safe-net because the spacing is really tight, and you'll just actually chamber the stab even if you wanted to dodge it, giving the opponent the ability to parry without having to CFTP.

And no Stouty, taking a risk isn't gambling lmao come on. There's a difference between attempting a risky play which's outcome is up to your skill, and straight up leaving something up to luck.

If you miss, you should be at a big disadvantage. Right now, you get a small stamina disadvantage and a slight spook, because if your opponent needs to morph or feint to punish you, that just means they have initiative. That's not punishing the whiffer, that's giving them an easy way out and making so that instead of dodges being individual plays, they become only setups to keep morphing and feinting.

A slight stamina disadvantage is a small reward for a risky play, keep in mind that I started my attacks while they were in windup even.

A) Not enough encouragement to pull off risky dodges or matrixes that are a one of the best parts of the game
B) No instant gratification; Makes spectating less interesting and makes playing feel unrewarding.
C) You have to morph or feint to punish a whiff, giving the whiffer a chance to read you or gamble you. And bringing a great aspect of the game down to the most monotonous part of it. Dodging should be its own reward, not give you a chance to do what you're doing 99% of the time anyway.
D) By any sane person's common sense, if you're dodging an attack and throwing yours extremely soon, you've punished a whiff. It's the intuitive thing, "oh he's mid-attack, he's vulnerable, I can hit him"

Imagine how a new player would feel if he sees someone miss, reacts to it super early, and the other dude still gets a parry. How is that good game design? How was he going to assume that the other guy had a get-out-of-jail-free car so he had to morph or feint to punish someone who was, by all common sense, in a vulnerable state?

Why wouldn't it? You hit someone, you can parry instantly. That would apply to your next combo to override the no-feint section. It would completely get rid of the ambiguity. (Obviously I'm saying that it should be made to work that way, not that it will out of the box)