I'm all for including a large variety of weapons but, keeping in mind we already have a Bardiche, if they end up also adding a Quarterstaff and/or Brandistock I feel a Glaive might be a hard sell to the devs unless it can provide a unique function.

Humble since it was your suggestion do you have any ideas?

BTW I need this on my desk by 5pm or you can start looking for another job.

Add this one please. It's such a simple QoL change that requires next to no effort yet will improve player experience a bit.

Hm well, looking at Jax's suggestion again, he didn't give a point cost to the brandi and seeing his description of the weapon, i find it weird:

Now, i know Jax is very busy in his duty of reading everything from all social media, so he probably thought of this fun and unique weapon that's trying to avoid having to put a heavy quarterstaff in the game (absolute heresy btw) but couldn't put too much thought into. If you ask me, this is a pretty messy looking thing. Being decent against an armor tier in my eyes means 3htk, you don't kill it quickly but you don't kill it slowly. Then he says T2 cand be 2 shot if you mix your attacks between head and body, making no distinction between strike and stab for the headshot, and also 3htk T3.
For me the big problem with this suggestion is the inconsistent damage across armor tiers, lighter armors should never tank more hits than heavier armor tiers. T1 and T0 are suposed to be frail and killed fast, and "decent" damage against it probably takes it out of 2htk territory.

Look at the weapon 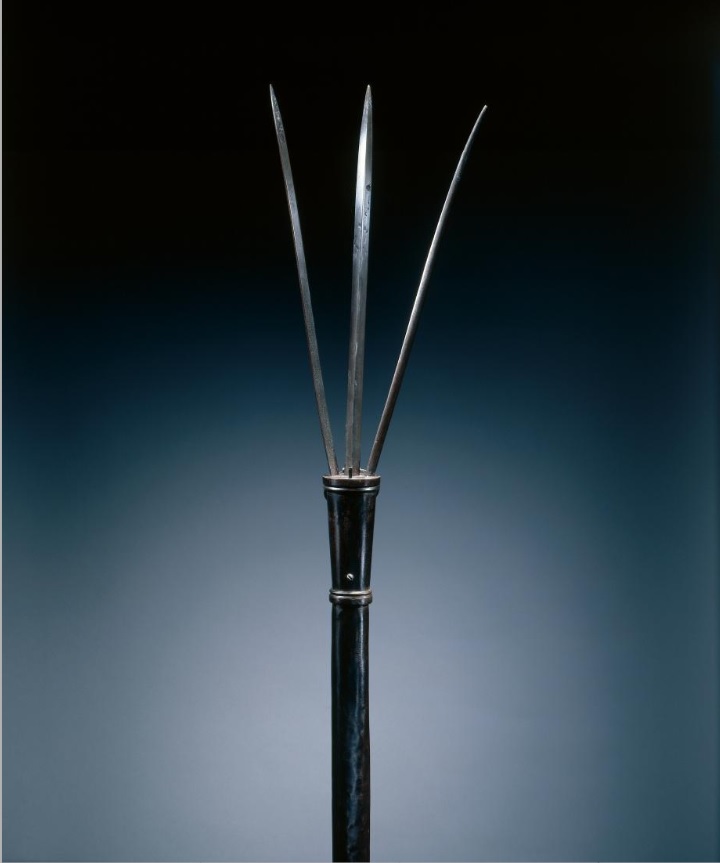 The information on this weapon is very scarce, but we know it was designed in the 1600's for civilian use, specifically for police/guardsmen duty. It was made away from battlefield, where plate armor was already on decay anyway.
This thing is a basically a trident, its thrusts should absolutely murder lightly armord people imho, the damn thing is making three stab wounds at the same time, but its main mode strikes should be very weak. Also i don't see any reason to make it be grabbed by the middle in its main mode.
My proposal is then:

Alternative mode
I haven't found a single video nor any info on how exactly the mechanism for the spikes worked, but i guess devs could get a bit creative here.

With these stats, i think it should be 6 points because it kills people with stabs (in main mode) as fast (with bigger numbers for T0 and 1) as billhook, but the strikes in the alternative mode are better at dealing with armor than billhook slashes. The idea here is to retain jax's suggestion of making the brandy an improvised quarterstaff (even gave it same stats as my suggested heavy quarterstaff). Basically i combine the heavy quarterstaff with a T1 and T0 murdering stabbing weapon, making it a straight upgrade from both the billhook (5 points) and the heavy quarterstaff (3 points). And so the heavy quarterstaff can coexist with this thing. I also think it can coexist with the poleaxe in the same point cost due to its quirky nature (the poleaxe feels more like an axe than a polearm anyway), just as the rapier and the longsword. If not, maybe the brandi can be a 4 point weapon, with some nerfs and changes to the stats i'm suggesting.

So, thus far, the polearm family looks like this

Now onto the glaive, there's still a vacant spot for polearms in the 7 points section, maybe the glaive can fit there. Glaive blades most of the times are wide enough to be vicious choppers but also have accute enough points to allow for good thrusting as well, as you can see in these pictures: 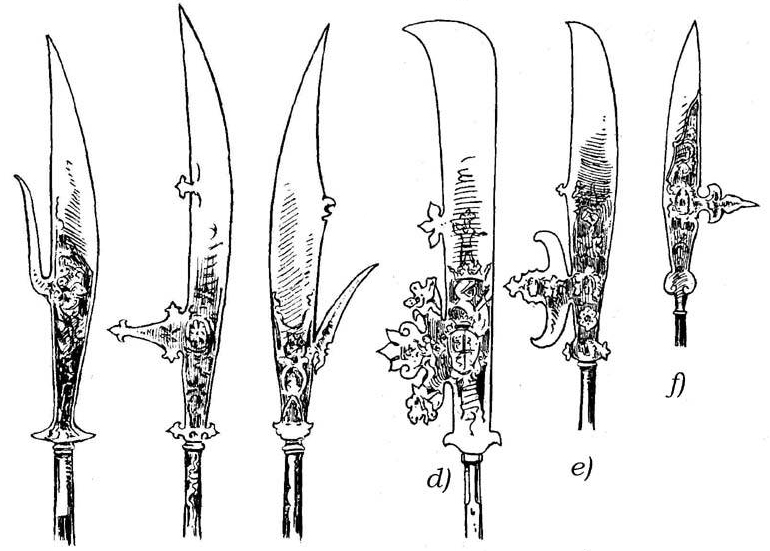 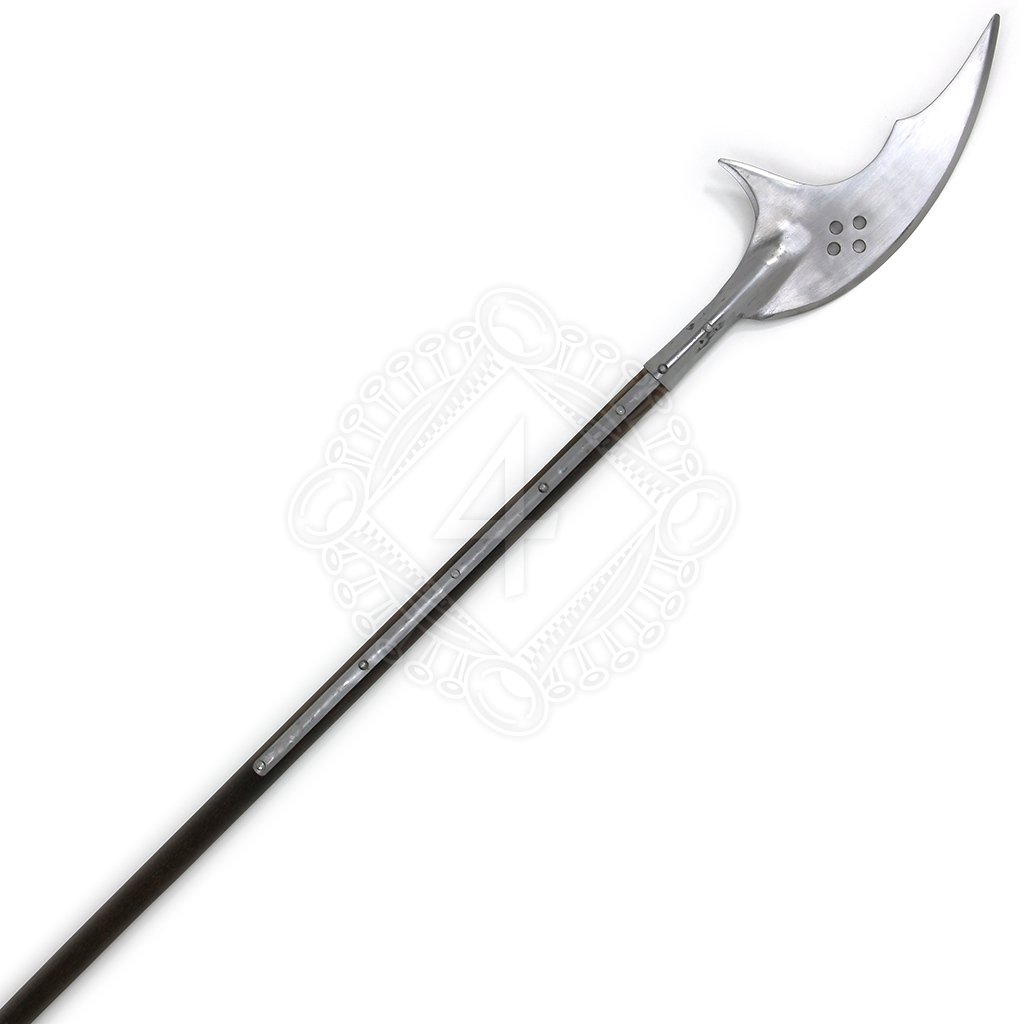 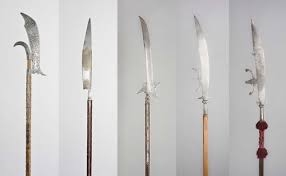 So maybe it can be a middleground statwise in between the billhook and the bardiche, without the utility of the billhook of course. To ilustrate this point i shall make use of my godly edition skills.

As you can see there's a gap in between the two attack types in each weapon, the bardiche has better swings and the billhook has better thrusts. The Glaive's stats could be somewhere in the middle of these stats.
This would also open the posibility for an alternate skin set of a weapon that has been requested in he past, the partisan 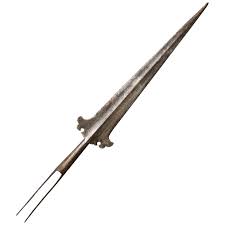 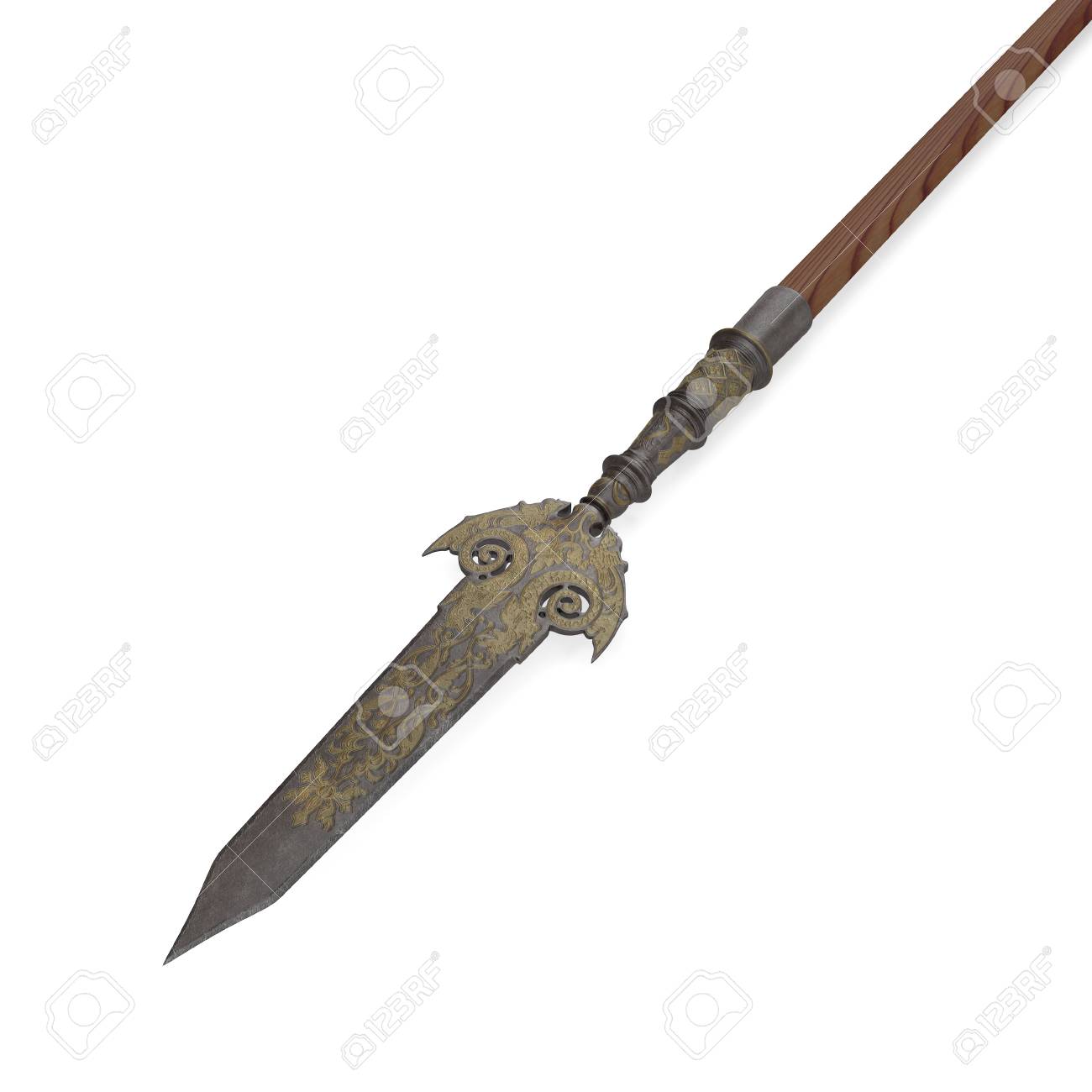 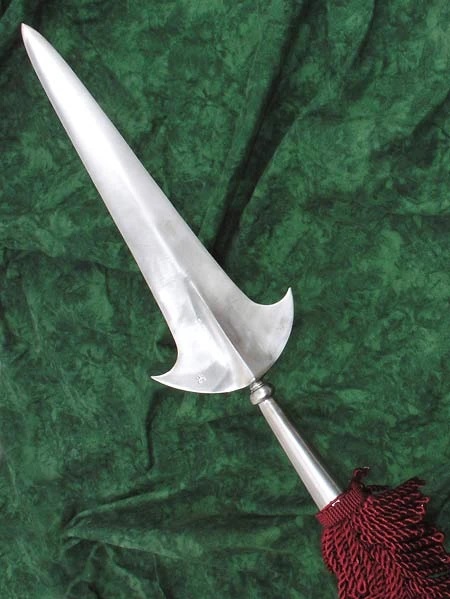 And a skin set for a more obscure one, also previously discused in here, the swordstaff

The three weapons share the same concept, a polearm that's suited for both good thrusting and slashing.
So there you go, i delivered late on schedule but i put my whole heart and soul in these posts, don't fire me pls.

Also, i noticed today thanks to a handy, goblin looking, enemy caveman that the two handed club thrust deals 80 damage to the naked head, while the eveningstar does 45 or something. ¿Isn't that a bit odd? lmao

Thank you enemy caveman for taking the hassle to travel in time until this day and then going to battle to show us this weird inconsistence.

Thank you for bringing this inconsistency to our attention Humble. I'll call accounting and have them look into it.

We'll put a freeze on that termination and keep you on the team for now. We can't get your parking space back though as it's already been given away to some guy who pecks anyone who gets near him.

Don't forget, Club costs 14 points. It's stab is nice, but it's swing doesn't oneshot armored heads like maul does. 45 / 48 damage not even enough for 2hk head. I think club and maul should get their stats switched. Also estar is 75.

Yea like, it's just a small inconsistency, doesn't really matter given the fact that you are super gimped when using the club for having to equip the peasant perk. But if someday my prayers are listened and the club gets added as a mercenary weapon, it should be addressed.
Club thrust vs E.Star thrust

Both are two hits to kill, it's just more reasonable and 0 work to just switch the values. But again, as long as it's only a peasant weapon, it doesn't really matter.

And i will reiterate, outside of that bizarre value, the only thing the club needs to become a 5 point mercenary weapon is a better basic skin. It's very little work, devs pls.

So you're saying a 3mm thick linen hat won't protect your head from a 12lb club?

And here I thought my leather jacket could stop bullets. I've been risking my life every day for 7 years.

There's the full post with skin suggestions, just gonna point out here that the evening star is a spiked two handed club. It has both spikes at the end of the shaft to enhance damage on the swings and a spike at the top to allow for good thrusting. Any skin for the club should avoid spikes, to make the distinction from the two clear.
Then you scale it down to a one handed club size and you got yourself a 1 point cudgel. Devs pls.

There's the full post with skin suggestions, just gonna point out here that the evening star is a spiked two handed club. It has both spikes at the end of the shaft to enhance damage on the swings and a spike at the top to allow for good thrusting. Any skin for the club should avoid spikes, to make the distinction from the two clear.
Then you scale it down to a one handed club size and you got yourself a 1 point cudgel. Devs pls. 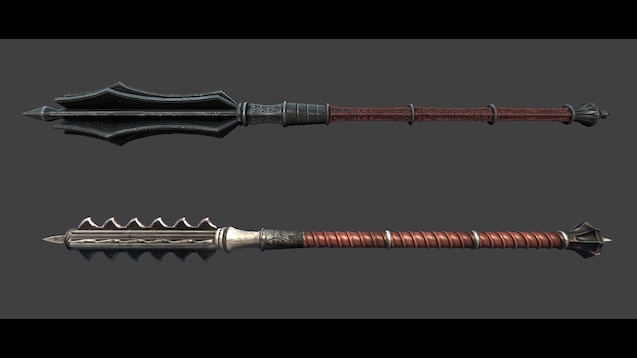 if that's the case then hell ya 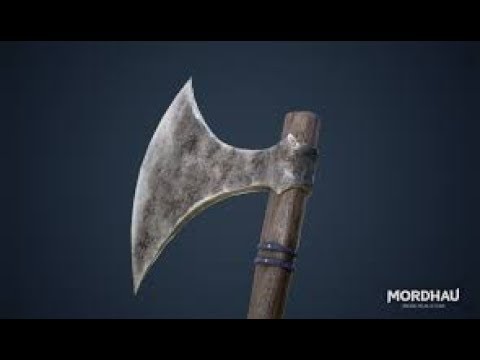 this style is pretty common so where the 1h head option? 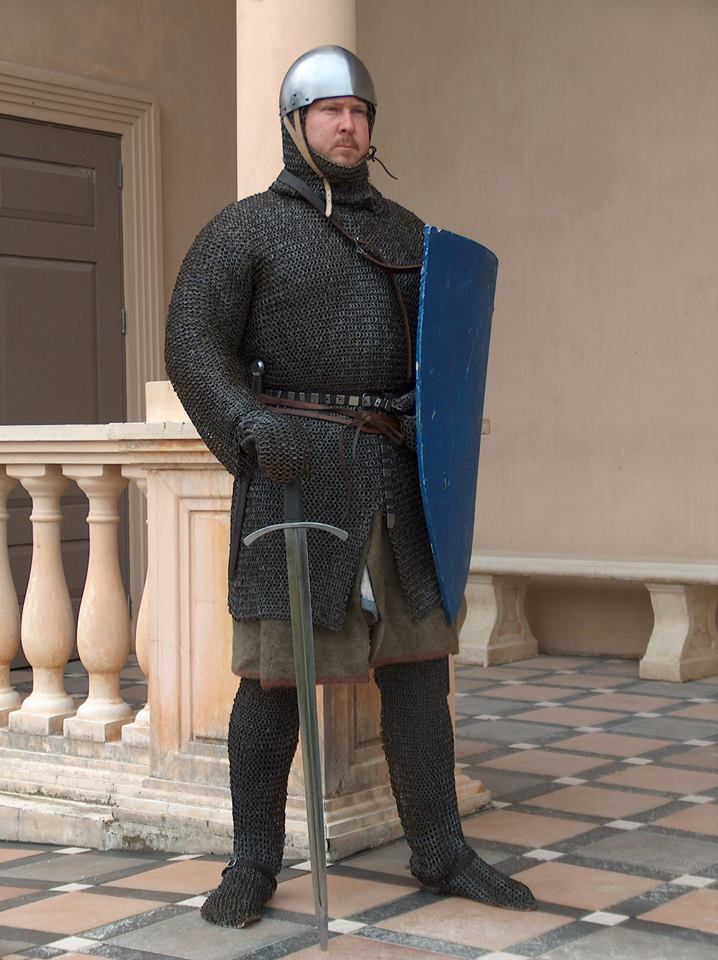 PROPER CHAINMAIL SHOES ones that actually look like there made from chainmail the chain shoes in game already are shit and nothing more than slippers that can be colored we need glorious rings dammit!

Um no, like, it's a club. While clubs can be classified as a type of mace, they are distinct in that the entire weapon is made out of wood. If there's metal it's an addition, it's not essential, like with a mace with a wooden shaft.
Clubs don't even need metal to be great, metal just enhances their properties in different ways (plus make them look great). They are other of the underrepresented and underrated weapons, very cheap and easy to make and yet very dangerous and miles better at fighting armor than most oh so beloved swords. There's plenty of evidence of their usage in warfare.
Also I'm in for propper chainmail leggings/chausses. 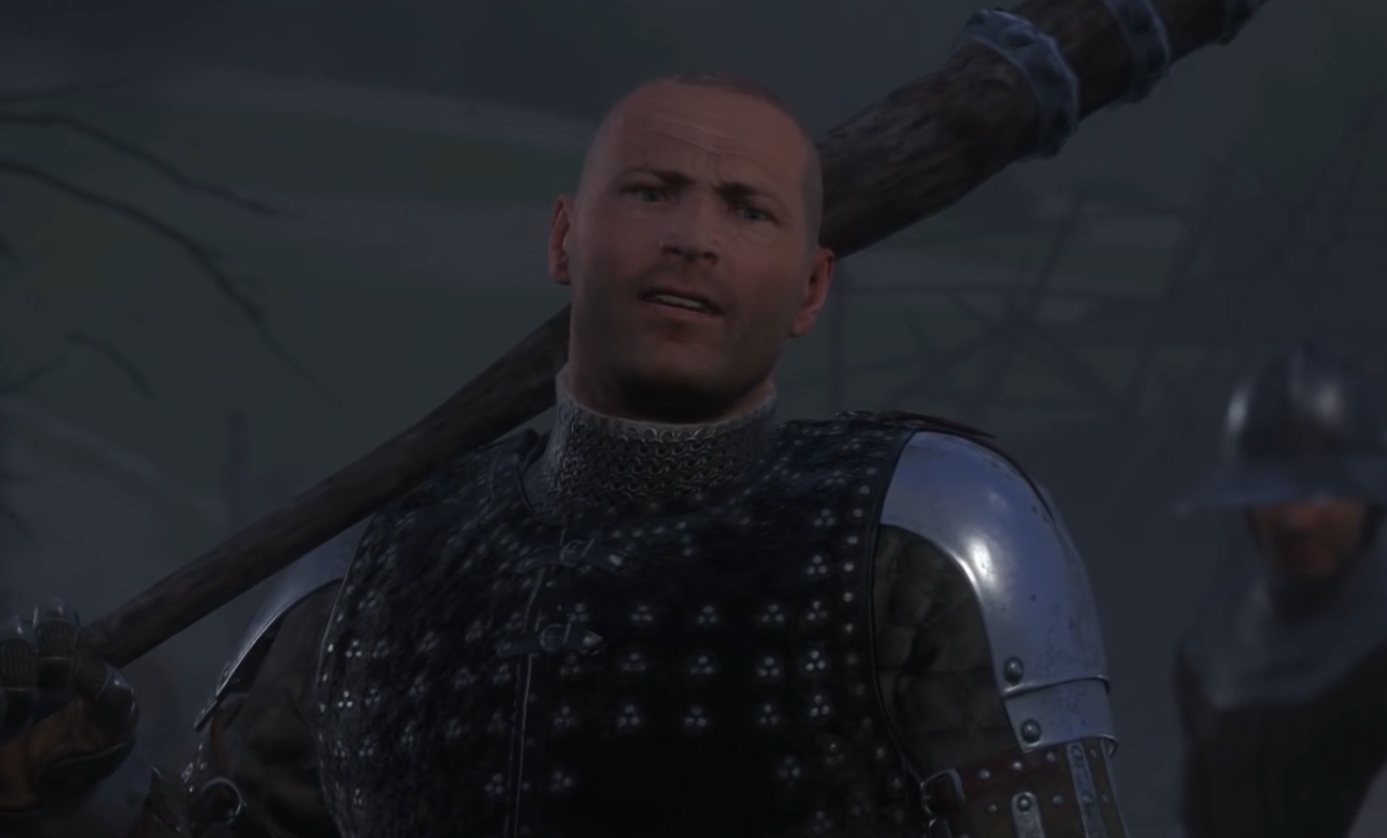 Sooooo i read somewhere here in the forums that the new game mode with economy system (a la counter strike) is coming. And that makes the cost of the weapons shift in some significant way for that mode, I already knew that, but I also heard that you guys are rebalancing the regular point system?? I'd like clarification on that.
¿Is it true @Jax?

I think it's a mod right now, nothing official.

Yeah, like Humble said, and do we have to save our loadout somewhere before the mighty patchie destroys our fashion ?
Please if it does warn us some days before, on Reddit / discord / forum ect ect...

Always keep a backup of your game.ini. You never know when you might need it.
Its in %localappdata%\Mordhau\Saved\Config\WindowsClient