A Suggestion for this "Underdeveloped" feature of the game

Before reading my rant, read my roast
Many people reject fan rebalances because they are written by avid gamers who actually know fuckall about game design. While I am an avid gamer who drinks mountain dew and likes doritos, Im also studying game design and try my hand at game development. I don't claim to have as much experience as the guys from triternion, but, I hope at best to provide a fresh idea for the design team, or, at least have the community tell me why Im such a failure, and should quit game design and delete my steam account for good.

And now, for something completely different
Its:
My knightly fist vs your peasant face
Most of us enjoy, or, have enjoyed fist fighting in mordhau. It feels fast and messy to punch each other to a bloody pulp, and, while most of us hate getting owned by a naked peasant with brawler and flesh wound, we all know how fun it is to humiliate your adversary by kicking them down or punching them right in the face. The thing is: perhaps my naked fist shouldnt be able to even tickle a knight's domed armet.

The suggestion:
Fists shouldnt be an equalized weapon for every character, perhaps it might be more fitting to have more punching power as an ironclad knight than a naked peasant. For this, the fists weapon could be reworked to be added to a character based on his body armor slot, independant of gloves, so turned into 4 subweapons: Bare Hands, Dressed Claw, Punching Mitts, and My Knightly Fist.

The balance:
In my opinion, fists in mordhau are too powerful. Getting killed in 4 headshots? thats slow, but not slow enough for a fist. A quarterstaff deals like 30dmg to a bare head while a nice hook to the kisser does 45, which is kind of dumb.
The formula I made to rebalance fist to chest damage goes like

Retaining same headshot multipliers and brawler bonuses. This means that 2 fully armored knights will kill each other in 10 chest blows or 5 with brawler, while my knightly fist VS your peasant face will knock you out (2 shot). This balance prevents peasants knocking a damaged knight out while empowers iron clad brawlers to slap those naked runners back to the armory (also, wear a helmet)

With this values, fistfights will be longer between equal foes, around the same time they are now when a knight punches a peasant and near endless for when the peasant strikes back (know your place, you filth.)

Stamina drain is also a thing, right now unimportant for the fist, but if we were to make fistfighting an asymmetric thing, then we would need to tweak the values too.
The idea is that the bare hand is by no means superior than the knightly fist, so while they have the same speed. stamina negation for the bare hand is none while that of the Knightly Fist is meant to be higher than the bare hand's stamina damage.
Because of this, a peasant can punch a fully armored knight as much as he likes, he wont break, and a peasant can try to block a knight for as long as he wants, he WILL break.
For the numbers I was thinking have the bare hand deal 7 stam drain and no drain negation while the K.Fist has 15 stam drain and 8 negation, numbers akin to 1 more than the dagger drain negation and as much as the dagger stam drain

Not many people remember the fist and shield, legendary combination of the war pugilists. Because of the fist's high speed and damage, it is great on the offense, but it is countered by a single riposte as fists cant block weapon damage, unless...

That was broken as all hell, yet it is useful in case you threw your arming sword at someone and now only have your targe left.
Fist and shield is not broken if this rebalance is added, because you would either be a slow knight with a shield chasing peasants which easily block your fist with their sledgehammer. or a naked scrub who tries to goof around but gets his ass handed back to him because he does 5 damage to 3/3/3

Im not saying it should be a viable weapon, but having the ability to block arrows with my shield in my hand rather than doing a 360 flip when getting shot at would certainly be nice.

Its quite rare to disarm someone in frontline, so this isnt relatable, but hear me out (whispers) most people get timing locked when fighting fist vs slow weapon!
not me tho... really, Im not lying!

Truth is that being disarmed makes you defenseless but not harmless, you can still run past, duck behind and jump over weapon strikes and then punish with one or two hooks to the face. Parrying certainly increases your survivality rate, but while mordhau is made for top players to be untouchable, it shouldnt be as ridiculous as naked guy pummeling a winged hussar to death.

My suggestion is that fists with an armor rating 2 levels lower than your head armor rating shouldnt flinch you, and chest shots shouldnt flinch at all unless equal or higher armor. Neither should a 3/3/3's bare hand block be worthless, it is actually possible to block a knife slash with your arms irl(Im saying possible, not adviceable) and it could also be a thing in mordhau.
It would make you feel less defenseless while disarmed and give your friend some more time to come to your aid, if rather than trying to squeeze a hit in you could put your hands up to soak some of the damage. Im not saying "block executioner sword blows with your hand" but if your chest armor is high enough, add a damage reduction for some weapons? Something like having knives and swords chip away at health while the arms get utterly shredded and raising your arms to stop a mace blow and then get stunned back and get hit plain in the face, as a means of buying time. Its not only positive for the disarmed but also funnier for the disarmee because admit it, beating a man to death is fun, right? (joking, NSA)

Some fleeting thoughts
Kicks should be equal in all characters but maybe my peasant shoes arent as harmful as those rigid tip sabatons?
Grappling should be a thing in mordhau
Maybe the development team has thought about this but discarded it for some reason
Kung fu in game is quite fun and it would be sad to let it go but peasant slapping sounds even more fun
What if triternion was bought by ubisoft and turned into for honor 2?

Tell me what you think about this!
I have been playing chivalry since the first free giveaway and mordhau since archery worked in 3D and you had to calculate your arrow's trajectory to land a hit. I've loved this game since I played the demo and it completely ruined chivalry for me, I'd love to see it fully developed and finished, and perhaps Ill do a melee fighting game of my own some day, maybe as an rpg like kingdom come. I have been thinking about this concept since chivalry and I calculated the numbers based on the assumption that a dagger carries as much momentum as the armored fist and should be able to parry a bare hand almost endlessly. My technique for rebalancing is picking a "perfect" item as the reference point and then scaling up and down from it. Again, tell me what you think about this concept, excuse my bad english and thanks a lot for reading it till the end.

Have a nice day! Fists are kinda memey wouldn't necessarily mind some item specifically for brawlers to be able to parry attacks though. 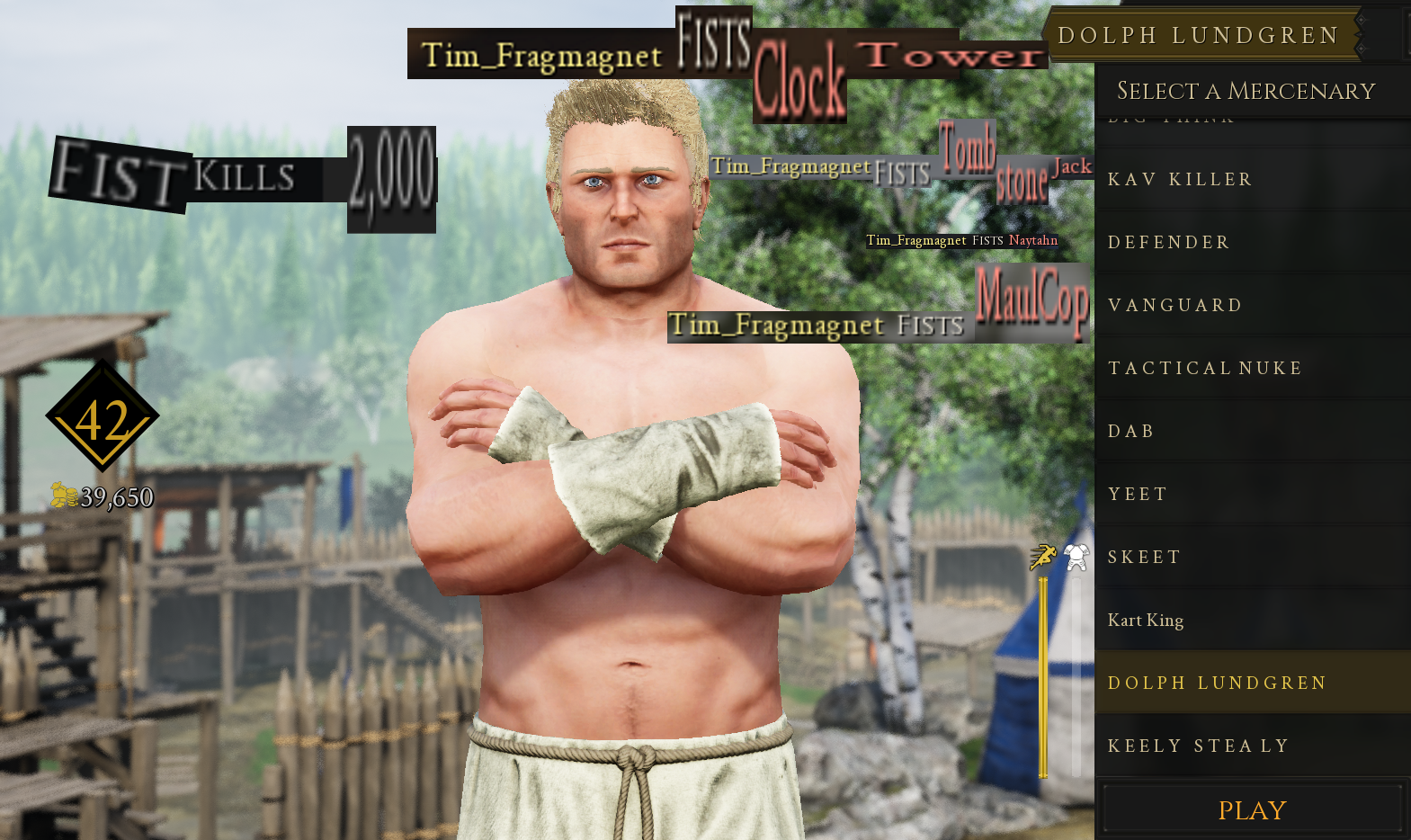 Balance based on equippment on hand slot makes sense, of course. Could be a nice addition.

btw: I've seen quite many fistfighters these days. And due to the laggy and glitchy mess that the game is right now, they are often successful...