@Antoniokontos said:
i meant this post as a failed attempt of fixing the "Held block bad" thing by making all weapons have it mind you shields being better at it and costing more stamina than shields but it was just a little thing i thought at the time would have been to add more realism

don't be stupid. if all weapons had held block there would be no reason to put on a shield... like for fucks sake dude, come on! think man.... think; of the people below! Instead of dismissing the statement for its simplicity, how about something that could be reasonably applied, even give the parry game some depth and variety among weapons while also making shields unique and less annoying. After all, if they are working on some change to the way shields work, may as well throw out some suggestions.
I do not think weapons should really get a held guard (at least not most of them), leave it to the shields... but it could be worth trying.

Call it the... Three-Stage Defense
Take this cruddy MSPaint visualization. 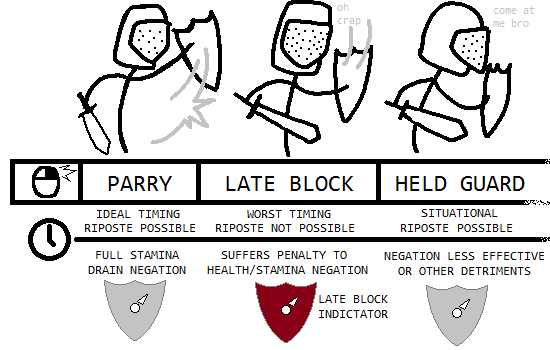 In practice, you can give different weapons and the shields different periods of time for these three stages, as well as some unique elements to their Held Guards to make them more unique. And if every weapon can hold their guard, you could even buff ranged weapons a bit to deal with the idea of everyone just holding up their weapon to block all arrows.

The many ever popular Two-Handed weapons with a standard Parry window and a large Late Block before getting to their Held Guard. Mostly standardized across anything 5 Points and up.
One-Handed weapons or weapons like the Quarterstaff could have a much larger Parry window and/or a smaller Late Block, allowing them to get to the Held Guard faster, even though they would suffer the most detriments in the Held mode. Maybe something like the Short Sword could have a really good Held Guard or superior Parry window to make it stand out from its competing 1-point weapons like the Dagger and Cleaver which most people gravitate to since they can spam those things.
Kite Shield with the narrowest Parry and/or the longest Late Block, meaning you need time to get that shield up and commit to a Held Guard, but it would have a much better Guard than weapons or smaller shields (it just can't raise that guard immediately).
Buckler with the widest Parry window, making it easy to Parry and Riposte, but you gotta pay those extra points for it and it would have the worst Held Guard.
The other shields somewhere in the middle between those two.

Again, while I think weapons should NOT have the Held Guard (most of them, a couple could use a held guard as a unique gimmick, like the Quarterstaff), the above could be a way to make Shields less of an annoyance, make each more diverse and give them different benefits with that multi-stage mechanic. If you're going to use a shield, either you time those parries (which would either be better or worse than using a weapon to parry) right just like everyone else, or you come into the fight with the shield already up.

This low-key what I was thinking,

When I first started playing the game.