Even more Voice Commands (You're welcome, Got your back, Go for the objective, etc.)

Chivalry has a total of 21 voice commands while Mordhau has 15. Both have commands that the other lacks, some of which have questionable usefulness, but there's definitely room for expansion in Mordau. Here's a comparison: 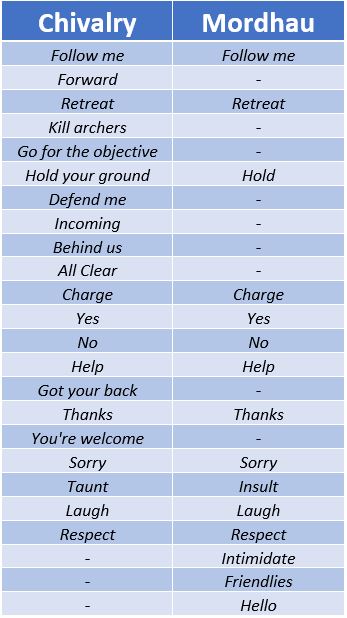 Mordhau arguably needs to have voice commands for:

Yeah, we could do with some more options, in Chivalry it really felt like you could say stuff for most situations and even have some funny dialogue out of it. In Mordhau, although it's pretty good, I feel it has some more to push to get the same level as Chivalry.
This would really be a welcomed addition.

Fucking add it ^ do you know how many tines this would have been useful? I can say hi to the enemy coming up behind my ally but i cannot tell my ally there is an enemy behind them because mordhau.

But hey, even this stuff isn't important when you launched your game 2 months ago and you still don't have a real main game mode or single decent map.

Also add more simple 1 word lines. You don't need to change every simple "no" into a 20 minute fucking monologue. You guys aren't Shakespeare. Just let me say basic shit like "yes" and "no". To go with any sort of expansion of voice commands, I would also highly recommend the adoption of the VGS style of voice command input layouts. Tribes VGS has a long list of commands arrayed into a bunch of relevant subcategories, often with an alphabetical association.

Mordhau's current need to tap C multiple times to cycle to the line I want out of the three jumbled sets of five and access it with number keys is not very favorable. It would be much more orderly and logical to array voice commands into categories and subcategories, with the inputs being set across the letter keys rather than the number row. This could even extend to the long sets of Emotes. VGS ultimately allows the player to keep their fingertips on the core keys and perform the desired command faster, with fewer inputs*, much more efficient to use in the middle of a battle.

*CCC4 to do "Respect"? Four inputs. Could reduce that to three or maybe even two. Given the number of commands currently, Mordhau's commands could be put into a few contextual subcategories, all fitting within the keys WASD. Maybe add on Q and E and R and F, have a concise block of keys on top of where you'd want to keep your fingers in the first place. While it may ever so briefly occupy the movement keys (movement need not be disabled while inputting voice commands), it is better than displacing one or more fingers away from WASD to press C and then a number.

Just an example layout, using some commands from both Tribes and Chivalry to pad it out:

Some more voice commands would be nice, especially "Behind you" and "watch out for archers"; there have been times when those would have been very useful to have.

**THERE THERE THE ARCHERS

WATCH OUT FOR THE ARCHERS