The part about 'early release has been clarified in the replies!

"Increased stab early release by 25ms (this will make all stabs hit very slightly slower)"
It shows 350 in the advance menu, which it did back in Patch 5. 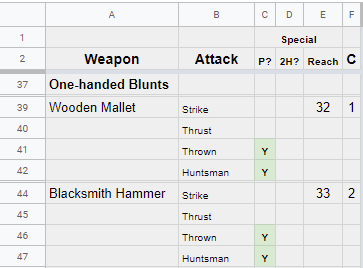 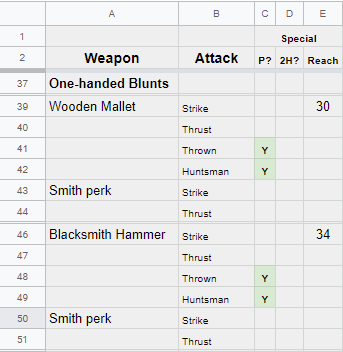 Hammer values in patch 6. (These are numbers I found from the advance menu in the inventory.)

This I can confirm.
It use to be -10 wood damage to both thrusts and strikes, where as now its -25 to strikes and -15 to thrusts. (minus wood damage means that it'll heal constructs instead of damaging, similar to how negative knockback on billhook pulls enemies towards you)

So the advance menu has been updated, but there's some inconsistency or something missing that needs to be the fixed or addressed.

I can't find anything in the advance menu about shields, but this could be something that is hardcoded, and not the values shown in the inventory.

The early release of stabs was increased, not the release. Early release is a phase between windup and release when the attack can be blocked but can't damage.

Thank you for clarifying this for me. I had no clue they added another sequence to the attack.

Early Release is just a timespan in windup.
The hammer ranges were probably increased for buildables only and the stats menu doesn't reflect that if I had to guess.