@Xanith said:
I agree honestly, I feel like 24 is the sweet spot for pubs. 32 is pushing it but playable, anything more is a laggy clusterfuck of LMBs.

24 people on Frontlines would feel extremely bare bones. 48 slots were good. 16 people less in Frontlines would be a big impact in everything and retain the feel of chaos the mode offers. We're talking about FL purely.

@machinegod said:
I agree with this.

The combat is best in small scale engagements. I would like an objective based mode with less players (TDM is just killing) to emphasize this. I believe a 32 player or 16 player frontline would be very fun.

Chaos is part of the game, get good, don't make me sound like a troll. You NEVER want to get flanked by someone or have to fight more than 1 person at a time? Thats WAR.

I'm sure it will be much different when clans start forming, and start using formations, and proper tactics.

Telling me to get good is very ironic. I am pretty sure I play this much longer than you and this is not a learn to play issue. I can climb scoreboards easy and I do not even use cheese weapons. I also am pretty sure you have no idea what war feels like. I really doubt in the real war people went and sacrificed themselves endlessly because they could respawn and I also doubt that lacking strategic approaches to gain advantage over a choke point was a good way to plan ahead. This is a game, and as mentioned, there is chaos by design and chaos because of clunkiness. Frontlines was tested what, 2 times in alpha? I really doubt they foresaw what 64 players would like on release.

i totally agree! if there where an option to get together in smaller groups, like small warbands, have to complete small tasks or missions to split the crowd, well we need bigger maps for 64players, i was always a fan of the squadbased gameplay in the Battlefield series. The frontline gamemode needs more complexity, not just capture a b and c 😂. hey even the old chivalry did this better. @machinegod said:
I agree with this.

The combat is best in small scale engagements. I would like an objective based mode with less players (TDM is just killing) to emphasize this. I believe a 32 player or 16 player frontline would be very fun.

Chaos is part of the game, get good, don't make me sound like a troll. You NEVER want to get flanked by someone or have to fight more than 1 person at a time? Thats WAR.

I'm sure it will be much different when clans start forming, and start using formations, and proper tactics.

I'm perfectly fine farming people in frontline. You are missing the point. The combat is best in small scale engagements. The combat is not as exciting in giant clusterfucks. Then the problem is not 64 players, its the maps, or the game mode. i'd like to have both tbh, 32-player servers for the good ol' chiv TO fun, and 64-player where you have to pick your fights and just can't charge into every melee with a chance of survival. Imo In 64 a lot of people are dying just because they feel obliged to engage the first enemy they see, or just run straight towards the objective without any backup and without considering cover at all. And unless you are in a position where staying and fighting against the odds to buy time would help your team, there is no shame in running away from a losing fight.

But yeah, sometimes i would like to have smaller, more solo-able battles, but it's not that much of an issue for me. Maybe because in the last few years the main active chiv server in EU is SneakyMonkeys' 64-player.

@Christian2222 said:
Then the problem is not 64 players, its the maps, or the game mode.

This is what we discussing. This has nothing to do with balance or maps/mode.

As much as I love large scale battles and engagement. I do agree with the OP. As a new player, with good awareness. I find it hard to force or create a 1v1 engagement because of the constant ganking. And even if we engange with an equal number of players, it's always a clusterfuck and lmb spam and the players who have the longest weapons or high damaging weapons always comes on top. Kinda hard to appreciate the shorter weapons because players prefer to use long reach weapons and just spams it to get many kills. Objectives are being ignored most of the time. Also annoying to play one's playstyle because it forces players to be one dimensional.

Overall it is still fun and enjoyable but the maps are small imo to fully appreciate FL. At least this game isn't plagued by those spinning rainbow slashes that happens in Chivalry. 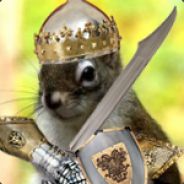 Just because you dont like 64 man battles it should be reduced for everyone? What is the point of this? Go find a server with 32 if thats what you want why are you moaning. For me frontline captures the essence of a massive castle siege, and definitely has its place in mordhau. If your struggling to find 1v1 in frontline your playing the wrong gamemode. The fact people respawn so fast gives the impression there are thousands on the battlefield just like how it would be in real life. Its mayhem but in a great way and im glad the option exists. I agree there should be various options for player numbers, but I quite enjoy the chaos, my one on one skills aren't good enough, but in a pitched battle I can be sneakier in getting round the back, taking advantage of the mess, using smoke, fire, range, throwing weapons etc. Even just being an engineer etc. in a 12 vs 12 environment, an engineer is probably going to be a waste of a weapon. In a 32 vs 32, suddenly a couple of engineers can make objectives near impenetrable for opposition forces (when combined with defenders of course), making larger numbers of opponents far easier to deal with for fewer defenders etc.

Yes 64 players are ruining it too mutch teamkilling and no coordination.

The way the maps are designed is the problem. The maps are huge but there is no reason to go anywhere aside from a linear portion along the arbitrary cap points.

Give players more objectives or put some ballistas or catapults in these no-mans lands for players to fight over. Map control in this game means very little. Either you are in the zone or you are accomplishing nothing.

On top of this, every map seems to have their common "frontline" spots wjere the same points will be contested every game. Resulting in the maps feeling very small and samey as you fight for the same points over and over... I wonder if you controlled the spawn directions a little bit more it might help instead of people going over the general area around the chosen spawn point, or having more forced chokepoints. Of course you'd have to really control the point's vulnerability to catapult fire, but overall you might see a bit more organization and less of the tidal wave of guys every 10 seconds on either end. While I agree that at 64 players our current map lineup does get a little congested. But that's what the community is for. OP makes it sound like its this huge deal when its easily fixed with private servers and I am sure the devs will keep some official ones at 48 and 64, hell might even see all sorts from them, Its just launched bro, take it easy hehe. I admire your passion though, pretty stoked myself.

When the modding kicks in, 64 wont be enough, its going to swing both ways... Side objectives and shit useful for taking capture points in nomansland sounds good to me. Maybe a workshop that spawn toolboxes as a pick up? I agree, I find the 64p just a bit too big and less enjoyable and I know I'm not the only one!