I have same problems with small freezes. every day more and more.. Game worked before months better qwith all ultra than now low medium hard ultra mixed..
Biggest issue is when game was starter..freeze meni ..and in FL game most problems at starting maps. First sometimes load so long..1 min minimum grad map..and after finaly starts graph looks as mega ultra low setting and after 1 - 2 min getting better. my pc is ryzen 5 2600,16gb ramm and rx 580 4gb. does anyone fix this ???

I have a solution to you all. In the video settings, choose Borderless Window. Then adjust the settings to your liking. This should fix your stutter problems.

I have freezing since release. After joining any kind of server, I usually get a 10 sec freeze, most of the time followed by disconnect. If I don't get it at start, I might or might not get it after.

I feel like I've tried everything, and nothing really works. I spent around 10h recently trying things suggested here in the forums or in other places, because it seems to be getting worse, especially after latest update. Also Feitoria has a lot of stuttering and is really hard to play.

Using potato graphics, Feitoria stuttering seems to be (almost) gone. But I still get the freeze + disconnect.

The game should run fine on ultra. I've invested in a good PC hoping to fix these issues, but I have the same problems as before, only better quality graphics and FPS. I love the gameplay, I've put in around 350h even with the freeze issues happening every 3-4 games. But the game is barely playable right now and I have to put it away until it is fixed.

I finally found the issue! I don't remember anyone mentioning this problem before, so I hope it helps somebody else.

It was the SSD, not performing properly. I figured it out by opening task manager and checking performance tab. I kept alt-tabing when I would get a freeze and noticed that disks were overloaded. After updating the SSD firmware, freezing stopped! I can finally play the game properly. I just formatted my PC and installed new Windows 10 v1903. I've then installed Mordhau and sadly I'm having terrible fps drops. I didn't have such problem before formatting.

Maps load in less than two seconds. I play on high/ultra settings usually getting up to 100 fps. Although most of the time I'm playing with 75 fps because I've got 75Hz monitor and with enabled V-Sync because I really don't like the tearing.
Fps drops last for two or three seconds. They occur randomly once in three or five minutes. When it happens and I'm in a fight, it usually ends with me being dead or about to.

Drops occur on every map (especially on the new one Fretoria) and on every game mode. They even occur on local match without other human players, so I think it's safe to assume it is not a network issue. They also occur in menu and in character setup, so not only in-game.

I do not have fps drops in any other game. For the moment I've tried with Witcher 3, PUBG and Minecraft (with mods, texturepacks and shaders, so yeah it's heavy on GPU).

Things I tried and it didn't work:

Things I tried and it eased the problem, but didn't solve it:

Things I tried and it did work:

Two solutions above that did make in fact the stutter go away entirely, but did not solve the core issue. They are just workarounds and I'm still hoping for a full-scaled fix for this. 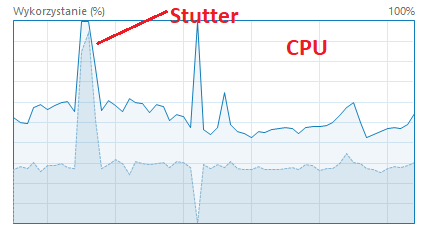 Is there any update on the issue?

I have similiar stuttering problem during gameplay, despite setting the lowest graphic settings.
My specs:

I have heard rumors about the Realtek HD audio drivers being the root cause of the freezing issue.

When I disable the sound the stuttering seems to stop... can someone can confirm that the developers are working on the fix?

Well, for me stuttering stopped after today's patch (build #14, 25/11/2019). Although other performance issue occurred, that stuttering one disappeared. Try the game after the patch and tell us if it worked for you.

tried the game after the patch and it is still stuttering and lag spiking so i didn't see any change what so ever.

Game is stuttering for me since this patch as well. Also my overall fps decreased. Texture streaming seems to be a plausible culprit for it. Fingers crossed for the hotfix.

The issue still persists for me.

Can we expect some fix in a future? I don't get it, this issue has been present for months.
I came back here to check if people are still struggling, so I could decide whether or not to buy it again.

Seems like this is a no go. Is the bug that difficult to fix? Or is it not prioritized? Probably both.
It's just so annoying when every game I play the past years are totally fine, and then I come across something like this. It is just a huge burden to put on the consumers, I read about all of these people who spend hours upon hours testing things, trying to solve the issue, while the devs are probably fixing something else or perhaps focusing on making more content or maps?

There are probably other things to fix. But we have waited at least 8 months, I think we have been patient enough.

i have not played in a while cause it was just heart breaking to try and play a game that just keep freezing and Stuttering i really was hoping they would fix it. but sadly no they have not and i think they just don't give a fuck.

Thats sad.. i am having game crashing stutters too and i cant even task manager close teh game. @Prolog I am in a similar position currently. I've also formatted my PC and before that I managed to get the game to be perfect but now it seems to not be right. I am also using a SteeSeries USB Soundcard (Siberia one, very old). My stuttering mainly occurs just before I'm about to die so I don't get a chance to parry the attack. Other than that the game seems fine. Did you get any further with your investigation?