In a recent thread asking if the short spear will be throwable, our community manager Jax has confirmed that the animations should be ready by release. The thrown stats are already in the game files, but looking at the numbers, I feel like its damage profile hasn’t been very well thought out. Perhaps the current stats are just a placeholder, but regardless, the thrown short spear could definitely use some much-needed buffs. 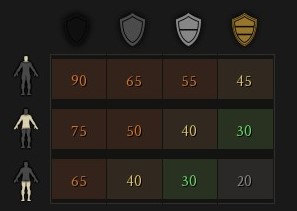 Currently, it has no 1-shot capabilities; though with the Huntsman perk against archers (75% damage boost), it only 1-shots T0 armor (head, torso, legs) and T1 head. 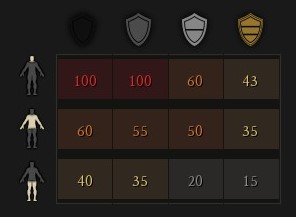 Now compare that to the throwing axes, which has generally superior damage across the board. In terms of hits-to-kill, the throwing axe has the advantage of being able to 1-shot T0 and T1 heads, 2-shot T2 torso, and 3-shot T3 torso. You get two throwing axes for just 2 points, compared to a single short spear for 5 points. Yeah, you can argue that the short spear is a primary weapon that can melee, but it doesn’t make sense that a small axe-head embedding itself a couple inches would penetrate armor better than a heavy spear impaling all the way through.

Overall, the short spear seems to be a strange place in terms of its role. Two things set it apart from other polearms: first that it can be thrown, and second that it can be used with a shield. As discussed early, its thrown damage is underwhelming compared to other throwables. When using it with a shield, yeah, it has good range (120 cm) with decent stab damage. But the bastard sword (somewhat shorter at 90 cm) can also be used with a shield, has a faster stab (550 ms vs 600 ms windup) with a nearly identical damage profile, not to mention its far superior strikes. So the short spear’s only saving grace is its range, which while definitely helpful, is not nearly enough to justify it point cost compared to other 1-handed weapons.

In summary, I propose buffing its thrown damage so it can function as a javelin role with strong damage against naked and lightly armored enemies, particularly archers. An alternative is to introduce a separate javelin as a dedicated throwable, with maybe 2 javelins per slot and the thrown capabilities I outlined earlier, at the cost of not being able to melee.

Those were likely placeholders so you're jumping the gun a bit IMO.

I'm so ready to driveby-picodor tomatoes from horseback.

they are placeholder Dmg values